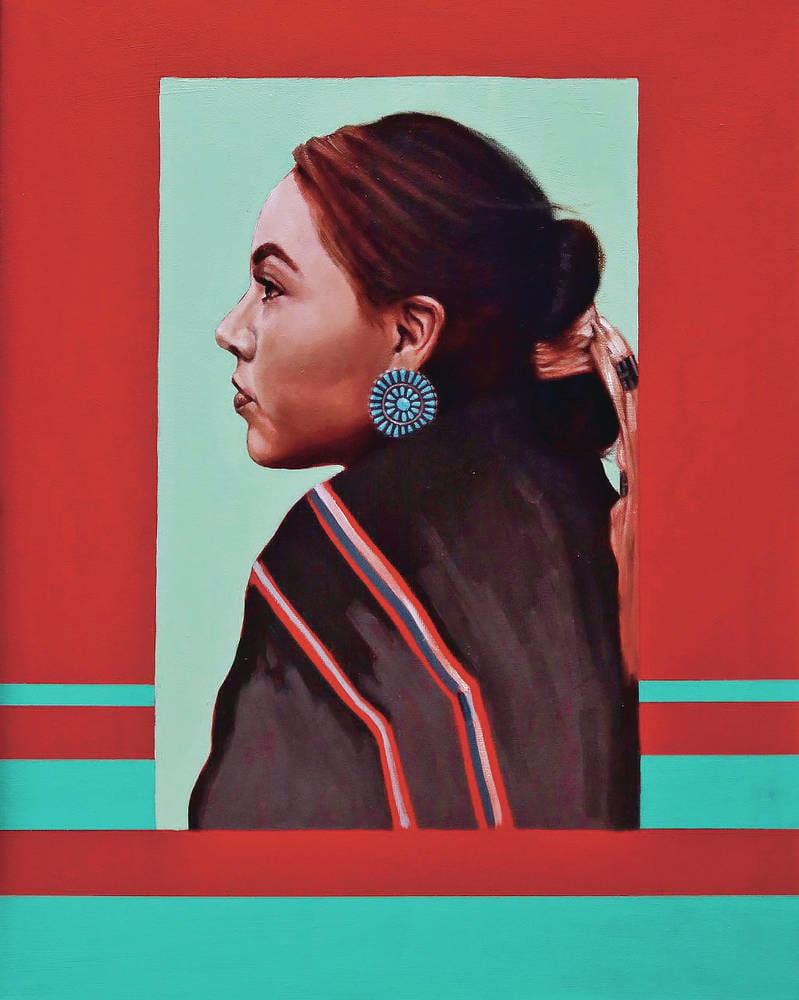 Karen Clarkson’s portrait of Erin Lewis, titled Tradition. Clarkson, of the Choctaw tribe, has painted 11 portraits of “strong, inspiring” Native women that she hopes will create a contrast with the heartache caused by the disappearance of indigenous women. Courtesy photo 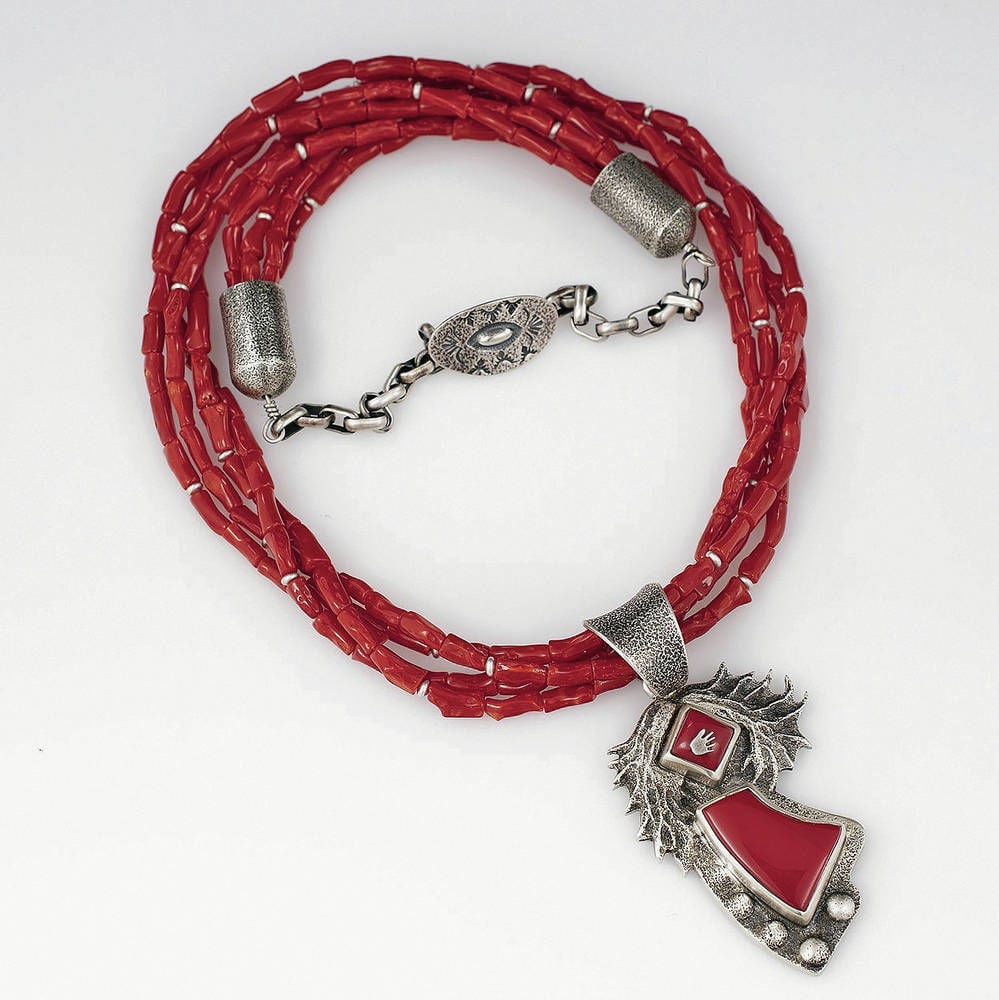 Tim Blueflint Ramel’s necklace Always Remembered signifies that missing and murdered indigenous women ‘haven’t had their voices, and to remind people that we have to be their voice,’ Blueflint said. Courtesy photo 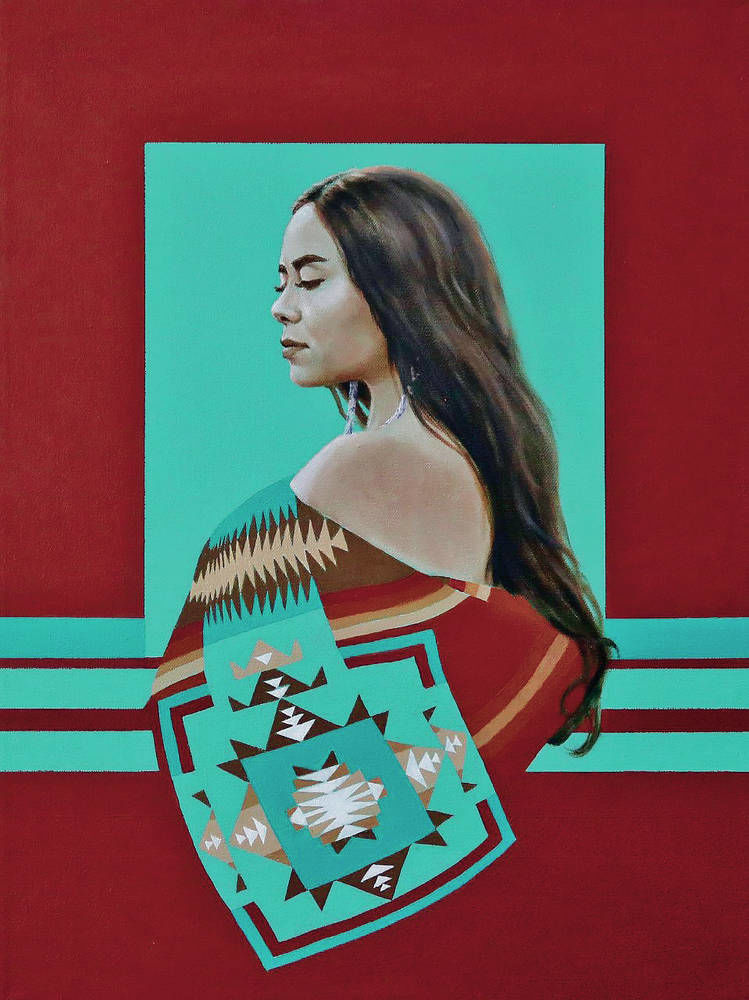 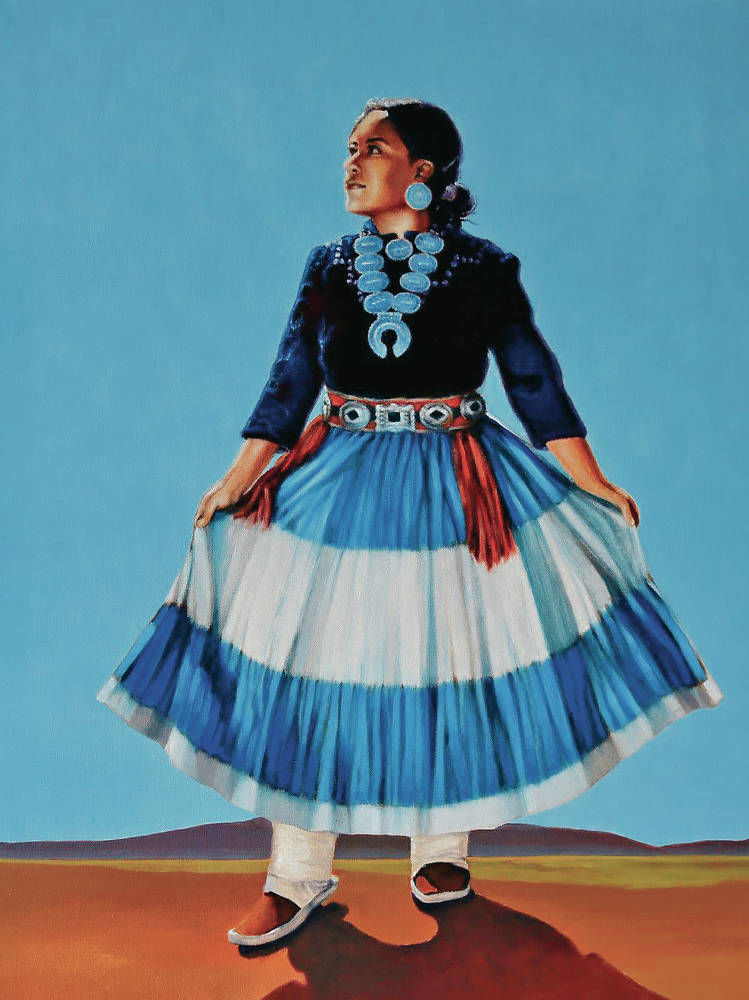 Karen Clarkson’s portrait of Erin Lewis, titled Tradition. Clarkson, of the Choctaw tribe, has painted 11 portraits of “strong, inspiring” Native women that she hopes will create a contrast with the heartache caused by the disappearance of indigenous women. Courtesy photo

Tim Blueflint Ramel’s necklace Always Remembered signifies that missing and murdered indigenous women ‘haven’t had their voices, and to remind people that we have to be their voice,’ Blueflint said. Courtesy photo

Chippewa and Comanche artist Tim Blueflint Ramel created a sterling silver and Mediterranean coral necklace with a pendant portraying a woman in a red dress. Where her mouth would be, the artist instead placed a tiny silver handprint.

This, Blueflint said, is to show that missing and murdered indigenous women “haven’t had their voices, and to remind people that we have to be their voice.”

Blueflint is one of about 1,000 Native artists from over 200 federally recognized tribes in the U.S. and Canada who will show their work at next weekend’s Santa Fe Indian Market on the Plaza and downtown streets. He has embraced the theme of this year’s event: “Rise and Remember: Honoring the Resilience of Native Women.”

The high-profile Native arts market — nearly a century old and billed as the largest such event in the world — has been dedicated to the hundreds of documented cases of Native American women and girls who have gone missing or were killed in the last decade and potentially thousands of others whose disappearances were not recorded or might have been misidentified as belonging to another racial group. The issue was spotlighted in a 2018 report by the Urban Indian Health Institute, which followed a similar initiative in Canada two years earlier.

The U.S. Department of Justice reports murder rates of Native women are 10 times higher than the national average.

Indian Market comes amid rising concern about what advocates say has been a nearly invisible epidemic and increased efforts in recent months to address the issue, including proposed federal legislation.

Several events planned during the market will center on the theme. Advocates say it is an appropriate venue to help raise awareness — not only is art a tool for activism, they say, but the revered Indian Market, which draws tens of thousands of visitors each summer, offers a platform to spread the message far beyond Santa Fe.

Cherokee artist Traci Rabbit said the market’s effort to raise awareness of missing and murdered indigenous women is “not only important, it’s an obligation.”

“Art is an opportunity to weigh in on this issue,” said U.S. Rep. Deb Haaland, a New Mexico Democrat and a member of Laguna Pueblo. “… I feel like we need to do everything we can to figure out how to stop this crisis, and the more avenues that we can talk about it and converse about it, that’s what we need to do.”

Haaland, elected in November as one of the first two Native American women in Congress, has introduced legislation to address the alarming level of violence against Native women. She will speak about the issue at a key Indian Market event Saturday evening, a gala fundraiser at the Santa Fe Community Convention Center.

Along with honoring victims of abuse, organizers and artists say, this year’s theme is intended to empower indigenous women and increase their visibility.

Elizabeth Kirk of Isleta Pueblo, board chairwoman for the Southwestern Association of Indian Arts, which presents Indian Market each year, is credited for introducing the theme. She she hopes there is a strong focus on the positive.

“We wanted to, of course, have our attention on the missing and murdered indigenous women,” she said, “but we also wanted to honor the women who have come before us … and the women who are fighting for future generations.”

Not all Native artists participating in Indian Market next weekend will show work addressing the theme. But some, like Blueflint, are seizing the opportunity.

Karen Clarkson of the Choctaw tribe has painted 11 portraits of “strong, inspiring” Native women, with titles such as Vision, Beauty and Confidence, which she hopes will create a contrast with the heartache caused by the disappearance of indigenous women.

“This is how I wanted to bring to life the story of what’s been happening,” Clarkson said.

Several Native women, including Haaland, worked together to decorate 25 hand drums that will be auctioned at Saturday night’s gala to raise funds for the Albuquerque-based Coalition to Stop Violence Against Native Women.

Rabbit, the Cherokee artist, said she painted bright red butterflies on one of the drums to represent missing and murdered women’s “transition into the spirit world.” Along the sides of the drum, she added a message in her Native language: “ha-da-do-li-sda, go-hi-di, ta-le-hv-ga, u-tla-ni-gi-da, di-da-ti-ni-do” — pray, hope, rise, strong, leader.

• Defiance of Silence: On Saturday afternoon, a group will install a multimedia art project on the Plaza, in which a tree will glow with red lights to symbolize missing and murdered women. Help hotline numbers and information on other resources for those who have suffered violence will be tied to the tree, and a shawl created by fashion designer Patricia Michaels of Taos Pueblo will be wrapped around the limbs.

• Red Quilt Solidarity Project: A quilt installation by Institute of American Indian Arts graduate Tina Sparks will hang at the gala, with worldwide submissions of beadwork and paintings stitched to its fabric. All of the patches, Sparks said, express “feelings or injuries of missing and murdered indigenous women.”

• Native Cinema Showcase: The 19th annual event, which runs Tuesday through Saturday, will screen several Native-produced films that focus on women, including Warrior Women and Vai. Warrior Women tells the story of generations of indigenous women fighting for their rights in the 1970s, and Vai follows indigenous female characters across Pacific islands.

• IM: EDGE: A curated gallery show and sale at the Santa Fe Community Convention Center, now in its fifth year, highlights “the female experience,” according to information on SWAIA’s website. It kicks off from 7 to 10 p.m. Thursday and runs Friday through Sunday.

• The Haute Couture Fashion Show: A Sunday afternoon favorite, scheduled at the Santa Fe Convention Center at 4 p.m., the show boasts women's fashion designs created by women. The Clothing Contest will take place on the Plaza from 9 a.m. to noon.

• Live Auction Gala and Reception: The hallmark event, a fundraiser for SWAIA, will be held from 6 to 9 p.m. at the convention center. Attendees are encouraged to wear red in honor of missing and murdered indigenous women.

While the market events have the potential to stir change, Haaland said, it’s important for the fight to continue long after the market is over.

“It’s going to take all of us,” she said. “All of us are going to have to join in this fight to ensure that our people are not stolen and killed.”

The artist Blueflint agreed, noting Native women also should be celebrated — not solely for a two-day event but “all the time.”

This story has been amended to reflect the following correction. A previous version of this story incorrectly reported the Haute Couture Fashion show will take place from 9 a.m. to noon on the Plaza Sunday. Instead, the Clothing Contest will take place at that time. The Haute Couture Fashion show is scheduled for 4 p.m. at the Santa Fe Convention Center.

Main event: 7 a.m. to 5 p.m. Saturday and 8 a.m. to 5 p.m. Sunday on the Plaza and surrounding streets; art, music and dance performances, food vendors and more. There is no cost to attend.