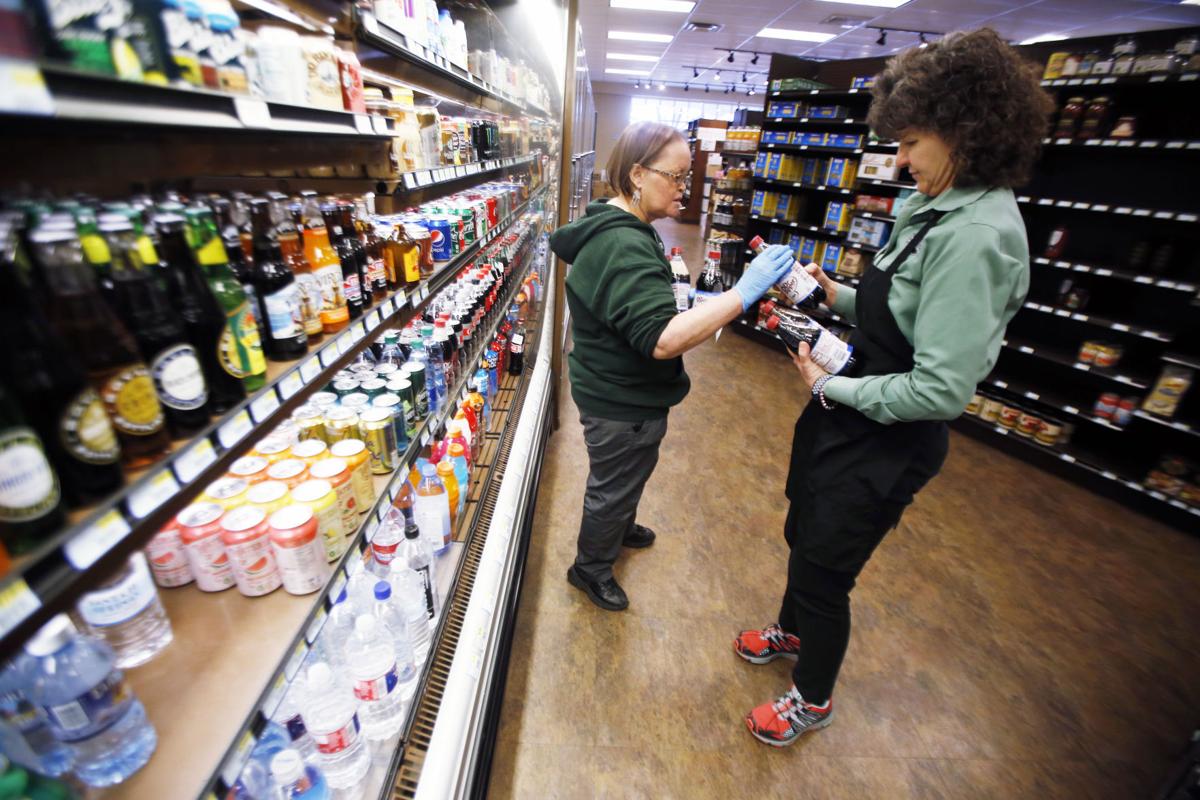 Cheryl Sommer, owner of Kaune’s Neighborhood Market, right, and Dolores Martinez, who has worked at Kaune’s for over 20 years, put together an order Thursday for a customer to pick up curbside. 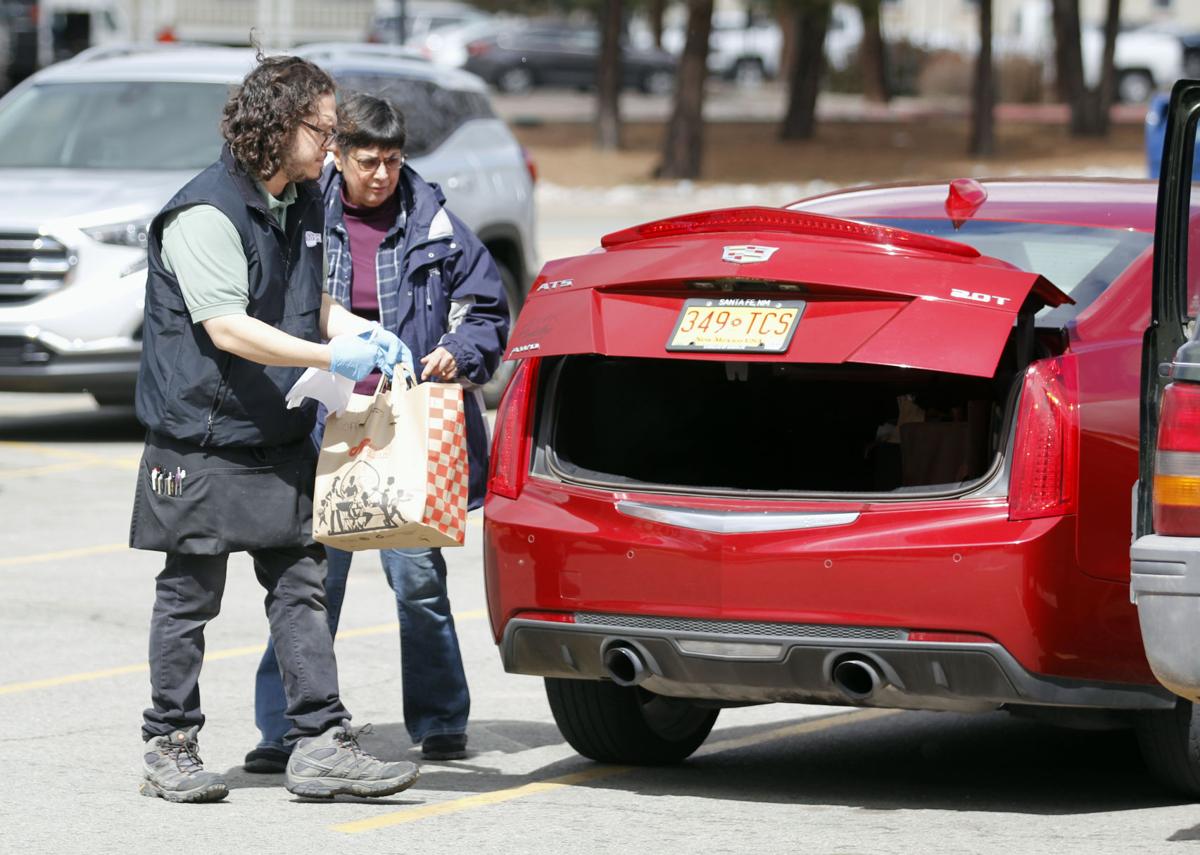 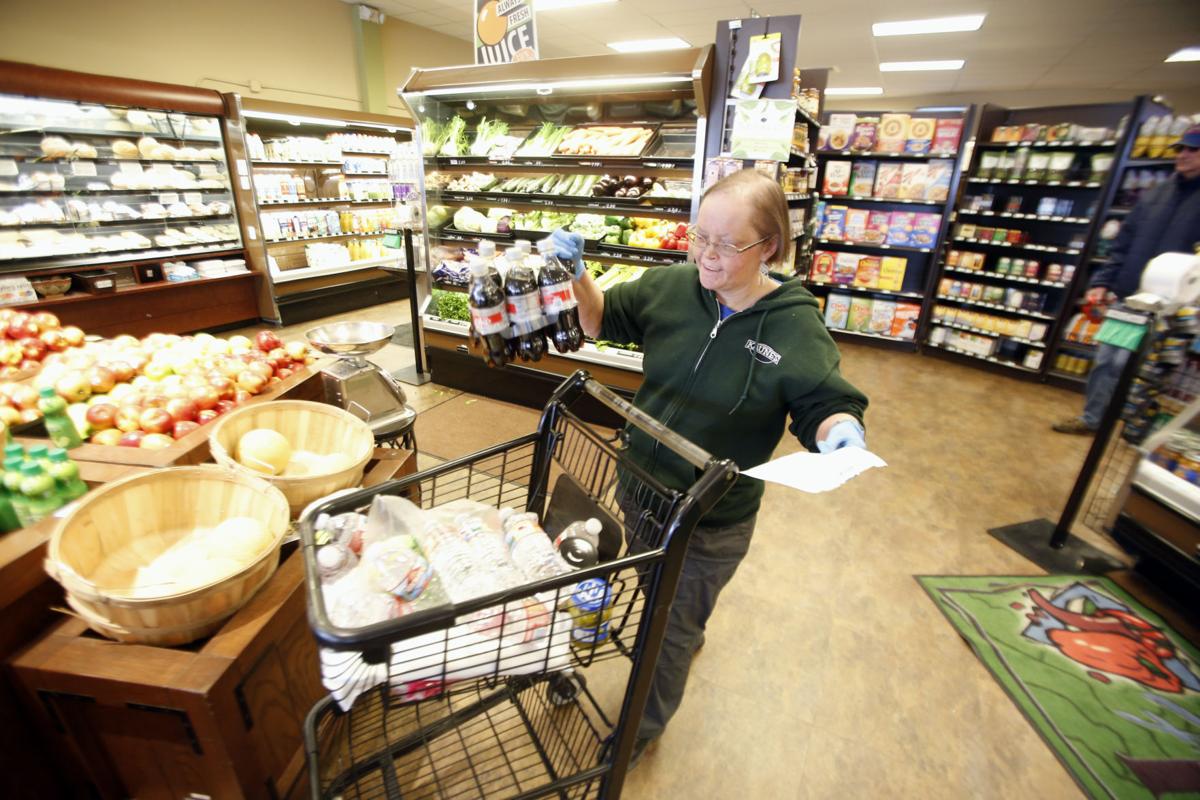 Dolores Martinez, who has worked at Kaune’s Neighborhood Market for over 20 years, puts together a shopping order Thursday for a customer to pick up curbside.

Cheryl Sommer, owner of Kaune’s Neighborhood Market, right, and Dolores Martinez, who has worked at Kaune’s for over 20 years, put together an order Thursday for a customer to pick up curbside.

Dolores Martinez, who has worked at Kaune’s Neighborhood Market for over 20 years, puts together a shopping order Thursday for a customer to pick up curbside.

On one hand, it was business at usual at Kaune’s Neighborhood Market.

Shoppers moved about the aisles while employees clad in recognizable sage-colored shirts restocked the shelves and served as cashiers.

And yet, at the same time, it was an unprecedented sight. Kaune’s, one of Santa Fe’s longest-operating locally owned grocery stores, was open on a Sunday morning. That almost never happens unless it’s Christmas Eve, said owner Cheryl Sommer.

But the new Sunday hours of operation — 8 a.m. to 1 p.m. for those 60 and older — speak to the importance and need for such a store in an era unlike any other. With grocery stores around the country among the few touchstones of American life that remain open amid the COVID-19 crisis, smaller community markets such as Kaune’s seem to provide a reassurance that needs can still be served.

“We are essential to this community,” Sommer said. “You have to eat, especially with all the restaurants closed. We’re gonna be here, so people don’t need to worry about running out of food.”

Cheryl Jamison, a food writer and one of those over-60 customers, shopped Sunday morning with that sense of relief. A longtime customer, she said the fact Kaune’s is now open Sunday mornings makes a difference.

“A locally owned and operated grocery store is incredibly important in terms of supporting community,” she said. “Especially in times like this.”

Still, as with the bigger chain supermarkets that also are open and serving Santa Feans during the crisis, Kaune’s found itself out of toilet paper by 10:30 a.m. Sunday. Some employees said they had some single-roll toilet tissue on the shelves when they opened at 8 a.m., and despite placing a limit on the number of rolls per customer, they were gone within about two hours.

Sommer let out a hearty laugh when asked why toilet paper continues to disappear from the shelves so quickly, not just in Santa Fe, but around the country.

“I wish I knew,” she said. “There is plenty of toilet paper. The problem is moving it.”

She said COVID-19 stunned dry goods and food distributors, just as it had other sectors. Some suppliers weren’t ready for how quickly people would clamor for food and other products as a form of security in uncertain times.

Of the roughly 50 distributors Sommer deals with — some 15 within New Mexico — she said most provide “a good supply chain” of goods.

To her, it’s just a matter of catching up on supplies while calming people’s nerves, something she finds easy to do in a local store of some 25 employees, all of whom have come to know their regular customers and their needs.

But it’s just that familiarity that keeps her up at night, she said.

“How long will this continue?” she said. “Am I preparing for a long-term crisis? The question of ‘What to do?’ ties in with the question, ‘How long?’ ”

Sommer said she intends to keep providing home delivery, particularly to the elderly and those who are unable to get to the store. She’s seeing home delivery requests increase from five per day to 20 almost overnight.

Phil Leyba, who has worked at the store for 36 years (he can be found stocking the dairy section most mornings), said he thinks Kaune’s offers an increasingly hard-to-find service with its delivery system.

“We have some homebound elderly folks who need us,” he said. “We make sure they get the food they need.”

Kim Johnson, who has worked at Kaune’s for six years, agreed. “We gotta do what we gotta do to take care of people,” she said. “And we do.”

Employees are noticing changes in the way their customers shop these days. More of them are wearing protective masks and/or gloves. The vast majority are practicing social distancing by keeping at least three if not six feet between them as they line up at the cash register.

The cashiers may wear plastic gloves and masks as well, but it’s tough for them to maintain that social distance from customers. Sommer said she talks about this issue with her employees all the time. So far, none has had an issue with it because they want to be there to help.

Employee Dolores Martinez, who grew up within walking distance of the store and who is about to celebrate her 21st year there, said she hopes people who feel ill stay home and arrange for someone else to get their groceries or sign up for delivery service.

“We don’t know who has it and who doesn’t, but we are doing our best to keep our customers from panicking and letting them know we are here for them,” she said.

She said the store’s clientele “trusts us more than places they may not go to as often.”

Marilyn Bane moved through the store with a small grocery cart full of boiled eggs, salads, milk and whole grain crackers. The personal care she gets at a small store, she said, is badly needed in such times.

Sommer has owned the store, located at Old Pecos Trail and Paseo de Peralta, for 17 years. She and her husband bought it in 2003 as an investment with the goal of letting someone else run it for them. That didn’t happen as Sommer, a native Santa Fean who was working as a lawyer at the time, became more and more involved in operating the store.

“It was the right career change for me but certainly not pre-designed,” she said.

She said she tries to uphold the values held by Henry Kaune, a German immigrant who opened the original H.S. Kaune Grocery Company in 1896, then on East San Francisco Street. Pamela Downey, a former owner of Kaune’s, wrote in a history of the store that Kaune wanted to “offer high quality, rare, hard-to-get foods along with the usual staples at competitive prices” as well as “deliver for free.”

Other supermarkets around the city, state and nation have started opening earlier each day to accommodate senior customers — a sign, Sommer said, retailers of any size care about their clientele.

She said she’ll keep the Sunday hours for seniors until the COVID-19 threat passes, adding she looks forward to the day the crisis ends and life can go back to normal.

“I operate this business on a lot of hope,” she said.

Sadly these specific hours for seniors lead to massive numbers of people surging into stores which is not safe either. It would be smarter for everybody if stores started regulating and limiting the number of customers in the store at any one time and for a specific amount of time so that we can all buy supplies and stay safe. Here is a great video about the math of transmission : https://twitter.com/i/status/1241803403619172359

Bless her heart and every single employee

Caregiver came to work a couple weeks ago sick,

And was out a few days

And she came to work anyway

Yesterday, Cheryl and staff to the rescue