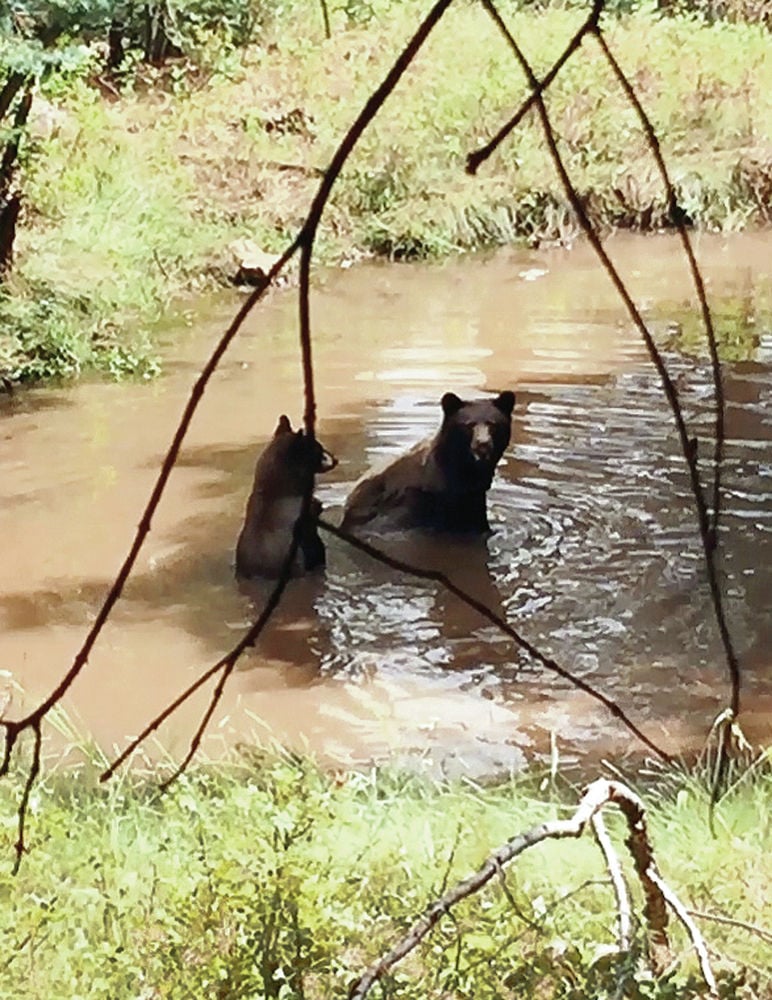 A female black bear and her cub were recorded at a watering hole in northeastern New Mexico shortly before the bear attacked a hunter. Courtesy New Mexico Department of Game and Fish. 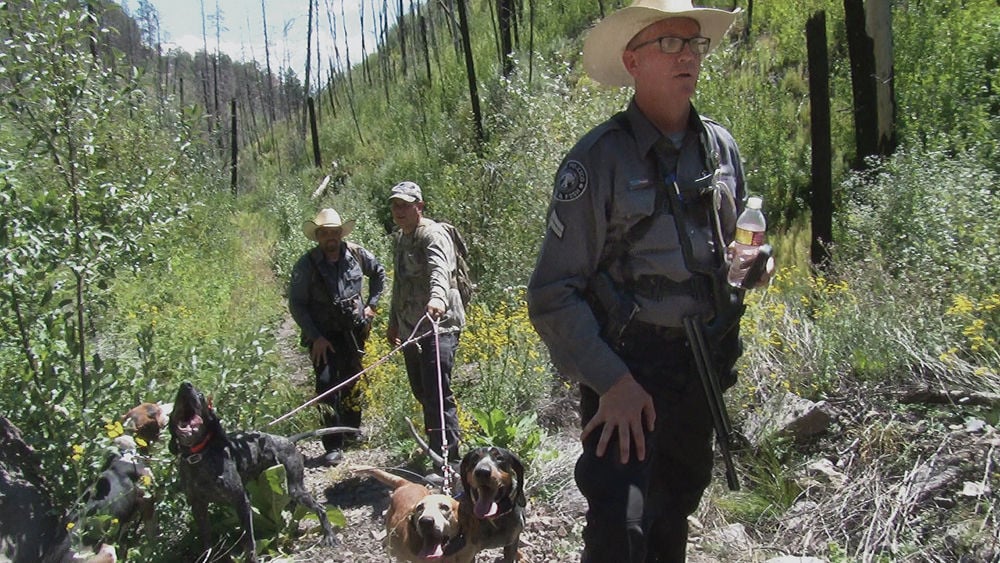 State game officers look for a bear that attacked a Los Alamos runner on Wednesday. Courtesy New Mexico Department of Game and Fish

A female black bear and her cub were recorded at a watering hole in northeastern New Mexico shortly before the bear attacked a hunter. Courtesy New Mexico Department of Game and Fish.

State game officers look for a bear that attacked a Los Alamos runner on Wednesday. Courtesy New Mexico Department of Game and Fish

State Game and Fish Department officers are searching for a black bear that attacked a 60-year-old man from Missouri who was elk hunting west of Wagon Mound, the second bear attack on a person in two days in Northern New Mexico, officials said Friday.

The hunter received bite injuries to his foot through his boot as he climbed a tree to try to escape the bear. He was taken to Alta Vista Hospital in Las Vegas, N.M., where he was treated and released.

The attack, which occurred Thursday near the tiny village of Ocate, marked the seventh time a black bear has attacked a human in the state this year, the highest number in the past 16 years, according to Lance Cherry, a spokesman for the Game and Fish Department. It was the fourth attack this year resulting in an injury. None of the attacks was fatal.

Cherry said the recent increase could be due to several factors, some of it just bad luck for the victims. Two of the encounters happened deep in the backcountry, where men were looking for antler sheds. In another incident, a little girl was bitten in her tent in the backyard of her home in Raton. She had food inside the tent and lives in a town well-known for bears wandering through in search of scraps.

Bears routinely wander into towns looking for food during times of drought. But with the extra rains this year, acorns, piñon nuts and other food supplies are abundant. Those edibles usually grow near trails and streams in areas where people hunt and recreate.

This makes the chances of close encounters rise, which could lead to “attacks that are primarily defensive in nature,” Cherry said. “Vegetation is also full and grasses tall due to the rain, which helps make surprise encounters much more likely.”

In Thursday’s attack, the hunter told officials he was eating lunch under a tree when he spotted the bear and her cub in a watering hole. He took photographs and started shooting video of the animals when the mother bear got angry and charged. The hunter, who officials did not identify, climbed the tree to escape.

At one point, the hunter fell 15 feet from the tree and then managed to climb back up. He fired his pistol into the air and at the female bear in attempt to scare it, but the animal didn’t leave. He then radioed for help. His guide told officers he found the hunter clinging to the tree nearly 50 feet from the ground.

The hunter told game officers he had seen five other bears before the attack.

The attack came a day after a female black bear with a cub clawed a runner on a trail near Los Alamos. Officers with hounds spent Thursday looking for that bear but suspended the search Friday because the dogs could no longer pick up the animal’s scent.

Officers also were searching Friday and setting traps for the bear that attacked the elk hunter.

Before this year, the state had averaged two bear attacks a year for the last five years. The bears involved are rarely located, and their gender is usually unknown, Cherry said.

No bear attacks on humans were reported between 2002 and 2006, according to the department.

The two bear encounters this week involved mother bears who had cubs by their side. The Los Alamos trail apparently was thick with berry-filled bushes, and the watering hole near Ocate attracts thirsty animals.

The attacks come as the State Game Commission recently voted to increase kill limits on black bears and cougars in most hunting areas of the state, claiming that populations of both species have risen. Conservationists opposed to the decision have disputed the department’s population estimates, claiming they were based on faulty science.

An adult female black bear attacked a 56-year-old man running a trail near Los Alamos Wednesday evening, according to Department of Game and Fish officers.

If you encounter a bear

• Stop and back away slowly while facing the bear. Avoid direct eye contact, as the bear may consider that a threat. Do not run. Make yourself appear large by holding out your jacket. If you have small children, pick them up so they don’t run.

• Give the bear plenty of room to escape, so it doesn’t feel threatened or trapped. If a black bear attacks you, fight back using anything at your disposal, such as rocks, sticks, binoculars or even your bare hands. Aim for the bear’s nose and eyes.

• If the bear has not seen you, stay calm and slowly move away, making noise so the bear knows you are there. Never get between a mother bear and her cubs.

If you live or camp in bear country

• Keep garbage in airtight containers inside your garage or storage area. Place garbage outside in the morning just before pickup, not the night before. Occasionally clean cans with ammonia or bleach.

• Remove bird feeders. Bears see them as sweet treats, and often they will look for other food sources nearby.

• Never put meat or sweet-smelling food scraps such as melon in your compost pile.

• Clean and store outdoor grills after use. Bears can smell sweet barbecue sauce and grease for miles.

• Never intentionally feed bears to attract them for viewing.

• Keep your camp clean, and store food and garbage properly at all times. Use bear-proof containers when available. If not, suspend food, toiletries, coolers and garbage from a tree at least 10 feet off the ground and 4 feet out from the tree trunk.

• Keep your tent and sleeping bag free of all food smells. Store the clothes you wore while cooking or eating with your food.

• Sleep a good distance from your cooking area or food storage site.

Maybe the bears are angry about the State Game Commission inviting people to kill them off. Animals are not stupid but some politicians are.

So sad when people encroach on wildlife and aren't educated about avoiding conflict. All the incidents described were defensive attacks. Jogging, getting to close and taking puctures then running and climbing a tree, having food in a tent and no one carrying bear spray are all invitations for attack in bear country. I hope the Bears aren't caught and murdered.

Tourist "yum yum"....... This guy should of read around a bit, bears don't like their picture taken. If you're gonna do it get a good distance lens or get way up high in a tree. [lol]

Duh!! A bear doing what bears and other animals do…protecting their young.
Was this "hunter" (killer) carrying bear spray? Probably not

I gather he does not understand the concept that this was a wild animal?