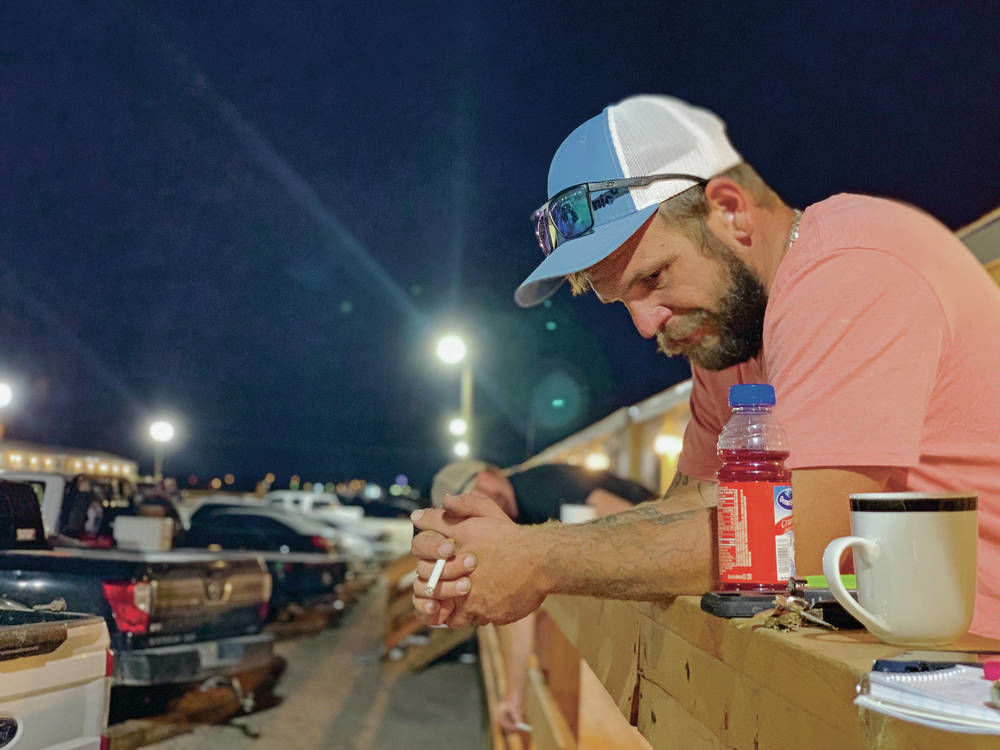 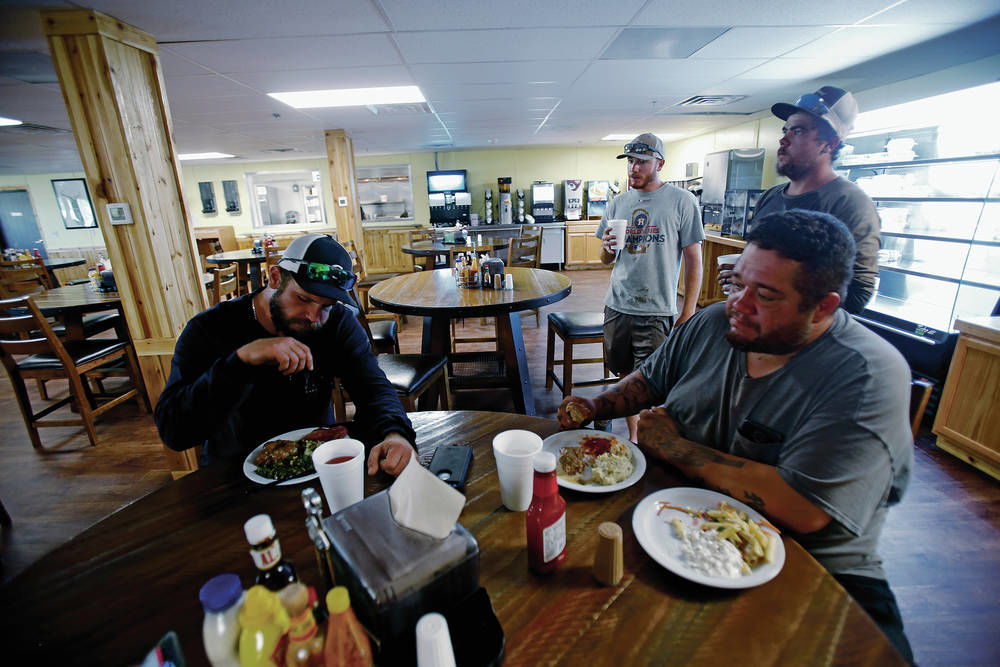 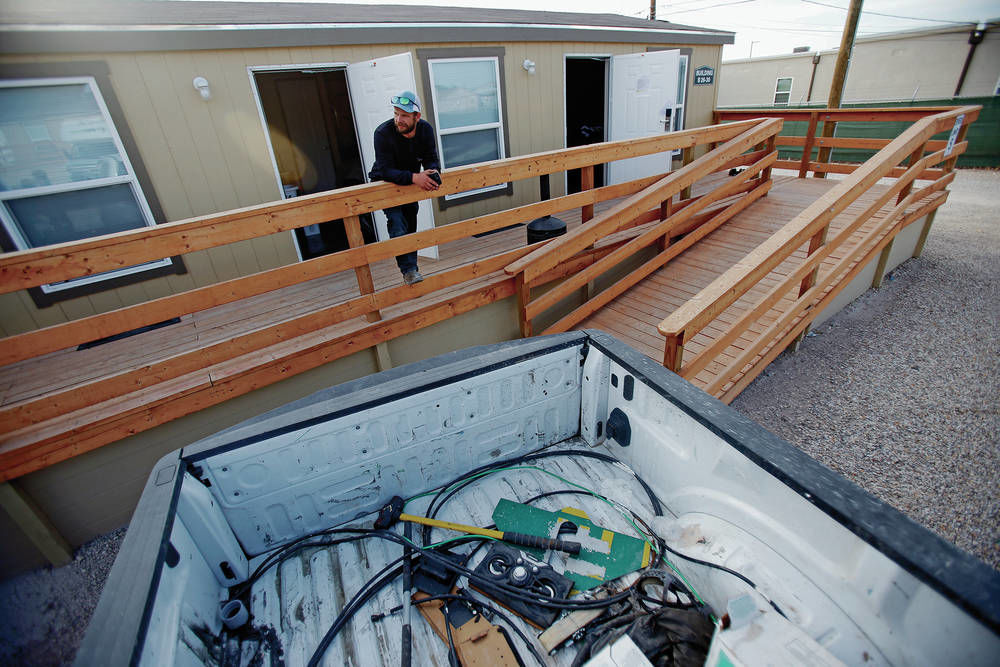 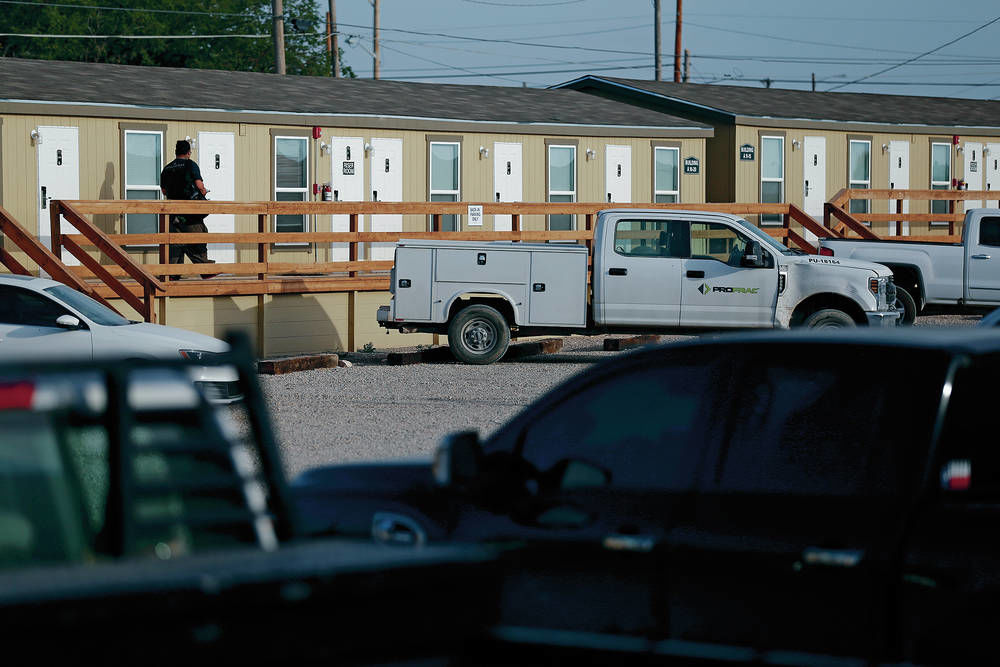 An oil field worker comes back to his Permian Lodging room in Carlsbad after work. Luis Sánchez Saturno/The New Mexican 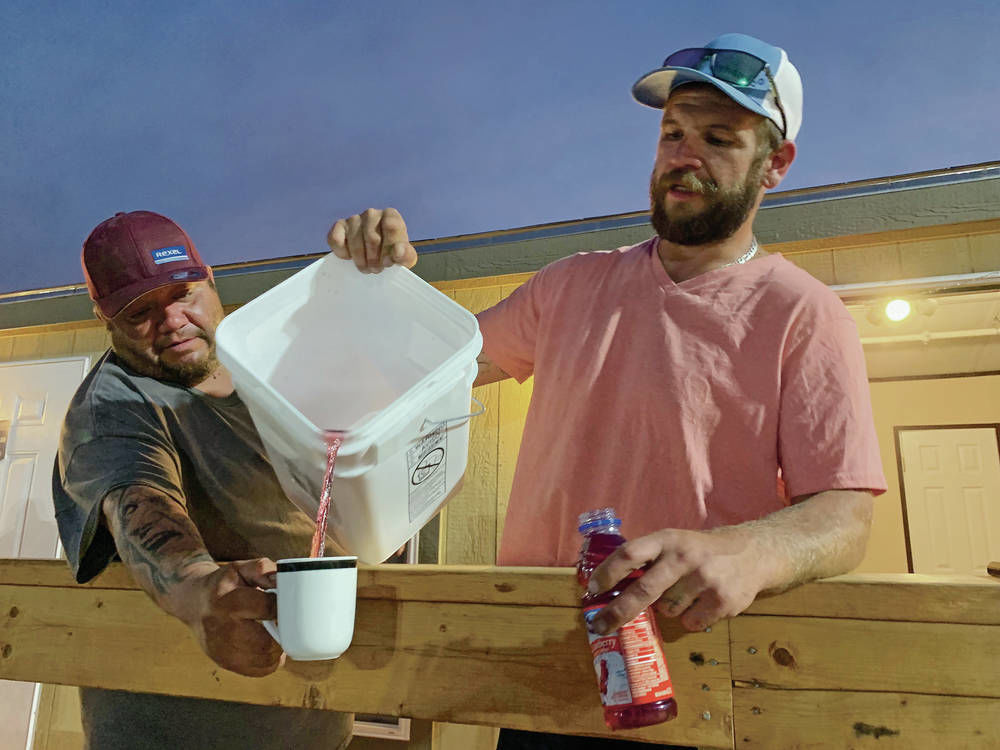 An oil field worker comes back to his Permian Lodging room in Carlsbad after work. Luis Sánchez Saturno/The New Mexican

CARLSBAD — A man camp is no easy place to walk into.

Here, the men are loud, they’re crass, they can’t show weakness. They chase money from New Mexico’s oil boom and spend it quickly — on new trucks, on alcohol, on women. They return covered in dirt from grueling 14-hour shifts and perch on wooden porches long into the night, drinking, smoking and heckling passersby.

But scratch the surface of this place, and you’ll find life here goes much deeper than the stereotypes.

In truth, this also can be a place of heartbreak. A place of loneliness. A place where some men try to escape dark pasts tainted by broken homes, tumultuous marriages, drug use and drinking.

Ultimately, it’s a place where men end up admitting they’re not as strong as they’re supposed to be. And that admission doesn’t come easy.

“They call me the baddest [expletive] in the oil field,” a man named Lucas, the veteran leader of a service company crew based here, says as he sits down to join his crew with a plate of food. “I was born and bred for this.

This is the kind of banter one hears at the 24/7 cafeteria inside Permian Lodging’s temporary workforce housing facilities in Carlsbad, the epicenter of New Mexico’s portion of the go-go-go Permian Basin.

Facilities like this one, more commonly known as man camps, have popped up all over the Permian because cities like Carlsbad lack enough housing to handle the huge influx of oil workers who operate the nearby fields. They’re also a convenient solution for companies that move workers from one area of the basin to another every few months.

The accommodations in a camp with a capacity of 400 are serviceable: Single and double rooms and full bathrooms, with reclining chairs to watch DirecTV on flat-screen televisions.

Local officials and business leaders know the camps are a necessary short-term solution, but they aren’t exactly thrilled about them, either. Oil booms don’t last forever, and locals want this one to fuel long-term growth, not just attract temporary workers who don’t bring families to the area.

“I’m not against the man camps,” says Robert Defer, CEO of Carlsbad’s Chamber of Commerce. But he stresses city leaders “want the wives and the mothers and the children.”

This facility, two miles from the center of town, doesn’t have families. Yet it is 100 percent occupied practically every night with around 400 people, mostly men, housed in multiple long trailers, each with dozens of rooms.

The oil workers here seem to be from everywhere except New Mexico — Texas, Louisiana, Oklahoma, other states. They typically work every day for two weeks straight and then get one week off to drive home and see their families.

In the cafeteria, each table acts as an island, with two to four giant men sitting and devouring mounds of food.

If a group sits in silence in the late afternoon, chances are the men just woke up and are eating dinner for breakfast, getting ready for a shift in the oil field that goes all night. If they’re talking, it’s a good bet they’re dirty and exhausted after a long shift that began around 3 a.m.

Either way, when a newcomer passes by one of these islands, they’ll get a slight, unwelcoming glance that seems to ask two questions: Who are you? And why are you here?

After some anxious moments, a pair of visiting journalists break through that intimidating veneer with Lucas and his crew and they warm up.

Lucas, who, like others at the camp asked for his last name and company not to be published, quickly offers a detailed lesson on how horizontal drills work, the fracking process and how laterals now reach two miles long or more. It turned out the lecture was for his crew, too.

“Mark that down,” he says to his “hands” — the two young apprentices on his team who had just done an unexpected 31-hour shift a couple of days before. “You’ve learned something today.”

He then talks about the younger guys at the camp and how they handle their lavish earnings — which can start at around $75,000 a year for a novice and increase to around $150,000 for those with ample experience.

“All these young kids — they don’t got no sense,” Lucas says. “They spend their money right away. They’re picking up truck payments of $800 or $900 a month.”

“That’s the oil field curse,” one of the young novices chimes in, perhaps speaking from personal experience. “You can’t spend it fast enough.”

Indeed, the parking lots here are full of full-size pickups in prime condition. And there’s plenty of chatter here about how oil workers pack the nearby bars at night looking for women.

“When I was starting out, I supported a lot of single mothers,” Lucas says. “I would go to the strip club on Friday nights and come out broke.”

When dinner is finished, the men hop into their pickups and migrate back to the porch outside their rooms, where they let out more of their antics.

At one point, when Lucas ashes his cigarette into a large trash can, the black trash liner catches fire. He goes into his crew’s room and grabs a large white bucket full of liquid and hoists it over the railing toward the trash can.

“No, no, no, no!” yells a hand named Cameron, using his arm to block the bucket from reaching its destination. “That’s my juice.”

Indeed, the liquid was red. Cameron had snagged prized cranberry juice from the cafeteria to make vodka cocktails later; he saves it from the fire just in time.

As night approaches, the men banter about lewd subjects, with one crew member showing off naked pictures sent by women. Lucas puts his call with his wife on speakerphone, apparently so everyone can hear her struggle to answer his crass questions.

When he asks her about a crude item he had delivered to their house, she responds, “Shut up. I’m going to get the kids ready for bed.”

Yet, underneath all the boorishness and bravado, and perhaps fueling it, there are layers of pain and grief that begin to surface as the night wears on.

Lucas and his wife have been going through a hard time and nearly broke up. He says it’s because he’s away at the oil fields so much of the time. He has three kids — 11, 9 and 7 — at home in Texas.

“It’s tough, man,” he says, dropping the bluster for more genuine talk. “When I was promoted the first time, I was never home. I was gone all the [expletive] time.”

It’s a common refrain here, with some men ultimately unable to save their relationships.

Sure, they bring home a lot of money. But they’re absent.

Will, an older member of Lucas’ crew, just divorced his wife after finding her with another man. A man on another crew, just 23, recently divorced because he was gone so much of the time.

Even those who keep it together say they miss out on most of their kids’ childhoods — the birthday parties, the home games, their pride over a good grade.

All this exacerbates the loneliness and eats away at them, they say. So they spend their time cracking profane jokes with one another, perhaps trying not to think about what they left behind at home.

But it still hurts.

For some, the oil patch has always run in the family. So has strife at home.

Lucas grew up around oil because his grandfather worked in the fields. But when he was 3 months old, his parents had an argument. He says his drunken father got in his truck, sped away and, just a few blocks later, flipped it multiple times.

As his mother ran toward the crash, still unclear exactly what had happened, she saw pieces of the truck scattered along the road. Until she came upon a blanket over his body.

The hardship has continued. Lucas’ nephew died of sudden infant death syndrome. He said one of his wife’s cousins, a fifth grade-aged girl, was left alone in her rural Texas house for three weeks, skipping school and without food or electricity.

Lucas and his wife took her in, discovering the girl was reading at just a first-grade level.

Lucas has adopted other members of the extended family who have fallen on tough times.

Maybe he does it in the hope others won’t face as much adversity as he has. Maybe it’s a sign that even under all the braggadocio, he cares. Maybe it’s his way of combating the loneliness.

Some of the well-paid workers spend their nights drinking or chasing women, while others focus on making money from their grueling shifts so they can bring it home to their families.