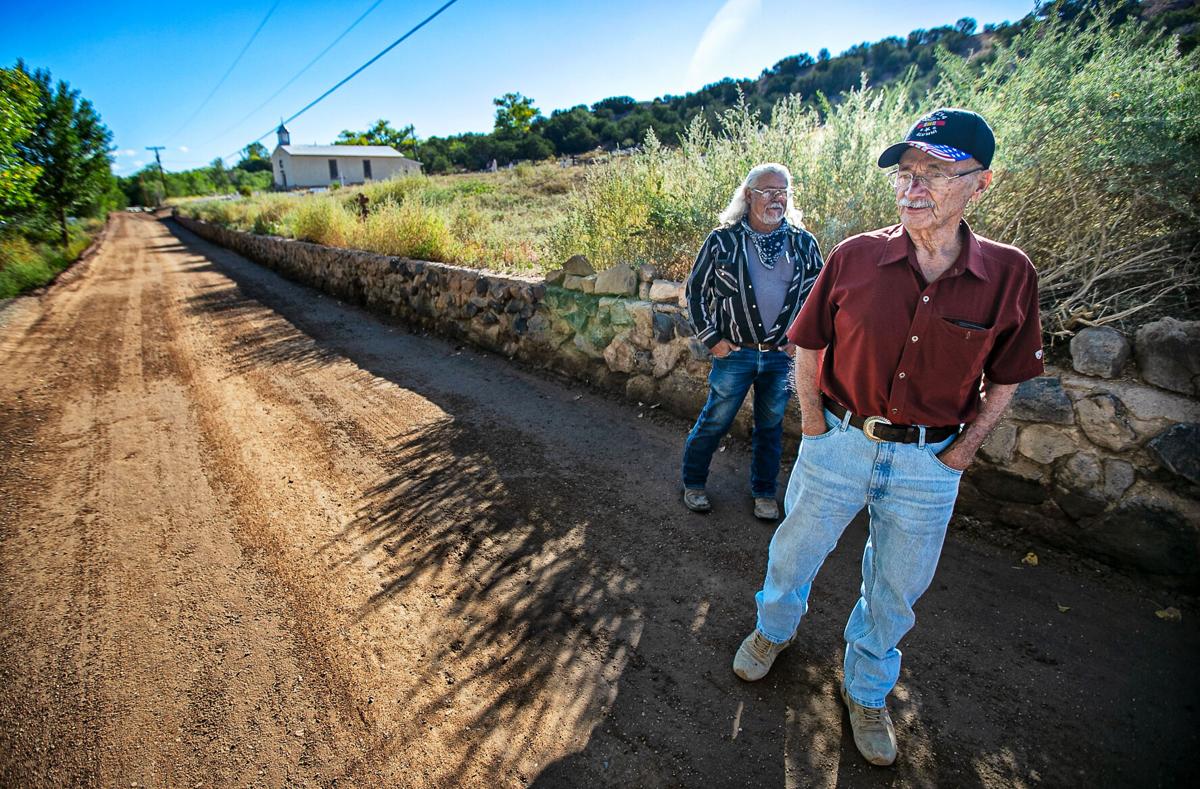 Archie Perea, right, and Charlie Torres walk Wednesday along Camino San Jose in La Cienega, where milling work is underway. Perea, 87, says he has argued for decades with Santa Fe County over what he thinks is a reasonable request — pavement on the road that runs past his house. 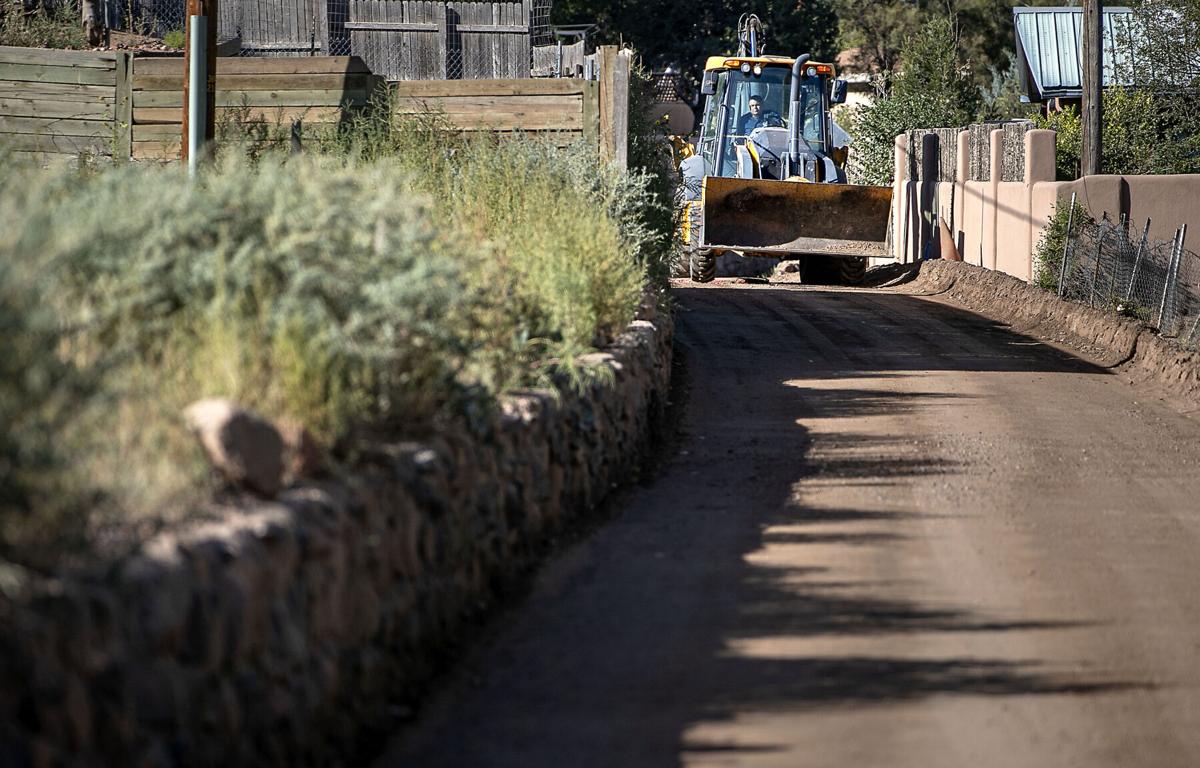 County workers work Wednesday on milling Camino San Jose in La Cienega. Milling generally involves shaving the top off a road, flattening it and covering it with crushed asphalt. The county also plans on covering the crushed asphalt with ‘chip seal.’

Archie Perea, right, and Charlie Torres walk Wednesday along Camino San Jose in La Cienega, where milling work is underway. Perea, 87, says he has argued for decades with Santa Fe County over what he thinks is a reasonable request — pavement on the road that runs past his house.

County workers work Wednesday on milling Camino San Jose in La Cienega. Milling generally involves shaving the top off a road, flattening it and covering it with crushed asphalt. The county also plans on covering the crushed asphalt with ‘chip seal.’

Archie Perea was born 87 years ago right across the street from his current home on La Cienega’s Camino San Jose, which wasn’t paved then and isn’t paved now.

Perea said Wednesday he has griped and grumbled for years to Santa Fe County officials about getting the county road paved, to no avail. He suggested this week his complaints are coming to an end.

“I’ve been after paving this street for so long. And I don’t think it’s going to get done in my lifetime,” he said. “I’m out of breath, out of time and it takes too much energy” to keep battling.

Santa Fe County officials contend Perea will get a good road out of work that is proceeding there now. He doubts it, but one of his neighbors who works in construction, Charlie Torres, sounded encouraged by the county’s process.

As roadwork started this week on Camino San Jose/County Road 50A, Perea said, workers told him the road would be “milled” and not paved with a conventional smooth, black surface. This set him off.

As though speaking to county officials, he said: “I’ve been squeaking for a long time, and I guess my squeak doesn’t reach you guys.”

Milling generally involves shaving the top off a road, flattening it and covering it with crushed asphalt. County spokeswoman Carmelina Hart said the crushed asphalt will be recycled from state Department of Transportation projects, laid over the dirt road and then covered with “chip seal” to bond it and pave it, she said.

“So it’s not just being milled,” Hart said. “And we’ve used this process on many county roads.” It won’t be like a state highway’s pavement, she said, but Perea’s road isn’t a state highway.

“The project, when completed, will be a paved roadway,” she said. “The roadway will have the appearance of other paved roads in the county.”

Torres, a 62-year-old contractor on road and pipeline projects, said later Wednesday it was good the county would put chip seal on it.

“If they do a chip seal, it’s a little bit different from throwing millings on it,” he said. “It’s a better product than just milling. And it lasts a while.”

Brian Jones, executive director of the Asphalt Pavement Association of New Mexico, said he wasn’t an expert, but “the highway department is doing a lot of chip seals all the time.”

Milling and chip sealing is cheaper than conventional paving, too, Jones said.

Perea wasn’t sold. He said chip seal and millings work well when laid on top of pavement but not when placed atop dirt. The foundation isn’t solid enough, he said.

The condition of a 2-mile stretch of Camino San Jose/County Road 50A in La Cienega has been a matter of contention for a long time, Perea and others said. The dust kicked up from the road has been horrible, they added.

Perea’s wife, Consuelo, has chronic obstructive pulmonary disease, he said, and they keep the windows closed to keep the dust out.

Two of his neighbors agreed with Perea, saying the dust from the dirt road pervades houses, settles on furniture and coats cars parked outside.

“The dust is insane,” said Jerry Sandoval, a next-door neighbor and Perea’s son-in-law. “I don’t open the back door to my house because of the dust.”

Construction contractor Torres, Perea’s neighbor on the other side, has lived there 26 years and initially paved Camino San Jose himself in front of his house. He also put a couple of speed bumps on it. The county removed the bumps and the paving, he said.

People drive too fast and motorcycle riders kick up dirt in the rural neighborhood. Perea mentioned “a guy in a gray Subaru” who “doesn’t know what speed limits are.”

The road isn’t a highway, and some of the houses beside it are spaced out in a rural fashion rather than side by side. Nevertheless, the town’s community center is along the road and a volunteer fire station is there, too. Just northeast of the three men’s houses is an old cemetery and San Jose Church, which draws a crowd on Sundays.

But the street remains a “back burner kind of road for the county,” Sandoval said. “It’s not a priority.”

Perea, who has spent most of his life along the road, built his home there in 1959 after fighting in the Korean War. He has renovated and expanded it.

The road originally served farmers, he said, but agriculture has declined in the vicinity. He said he did television and radio repair work and later construction for a living.

On Wednesday, he wore a burgundy sport shirt, jeans, boots and a veteran’s cap. Small and wiry, Perea expressed no confidence that when the road is finished, it will last.

In a little more than a year, he predicted, the road will start to show potholes and crumble, and the dust will fly again.

I have recently been told I have COPD/emphysema due to smoking. A few years back my general physician said there was something showing on my lungs. Thanks To WORLDHERBSCLINIC, Their Emphysema/COPD herbal supplement is nothing less than a miracle, I am fully back on my feet again and strong!.

Be careful what you ask for. For many years we pleaded with the county to pave CR63. It has been a fricken nightmare ever since. Once it was paved subdivision after subdivision started popping up & guess what? Our once quite peaceful neighborhood turned into a race track. And the sad thing about it is that our own county commisioner lives at one of those subdivisions & passes like a bat outta h**l flying over the speed humps.

I feel the tiredness of Mr. Perea!

Living in La Cienega for 30 years, anything you have to do dealing with the county is like getting your teeth pulled without numbing!!!

The roads in Eldorado got millings. What's the problem? Glad the reporter gave you your moment of fame.

Whew. Subject, photography and writing. I can only describe this piece in three-words: World-Class Journalism.

Give the poor guy his road.. He’s 87 and been paying taxes his entire life.

I can sympathize with people who want their road paved. However, IMO, we have a more urgent need to widen those roads that are too narrow for the effective operation of fire fighting equipment.