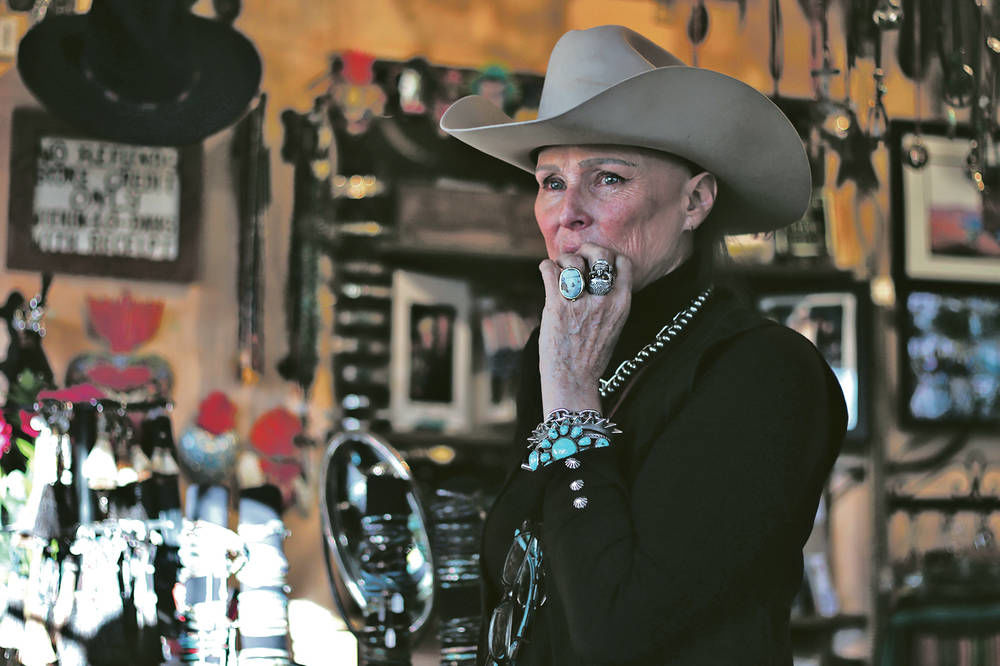 Nathalie Kent, the owner of Nathalie, a high-end Western store which was burglarized Monday, says she lost more than $100,000 of merchandise. Danielle Prokop/The New Mexican 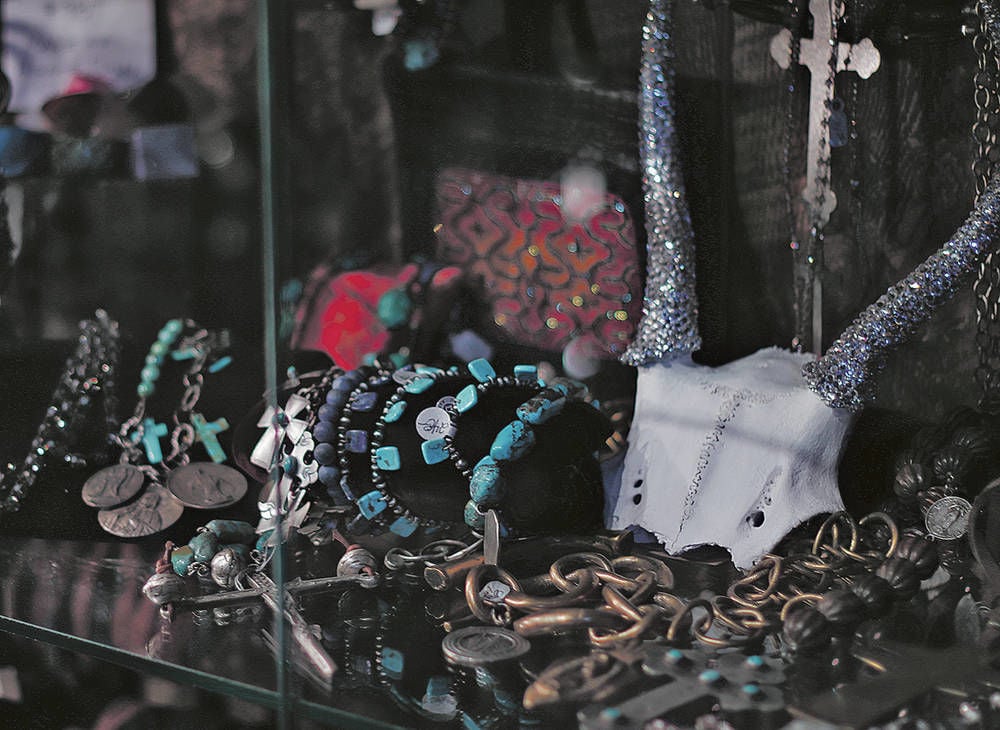 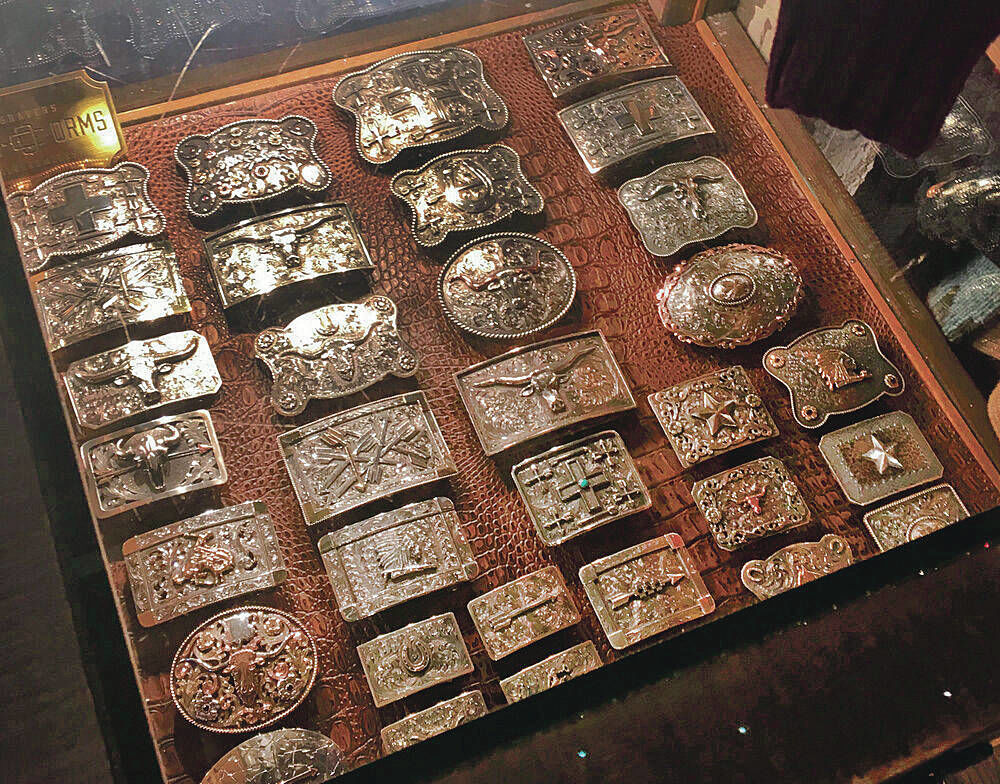 More than 100 belt buckles were stolen Monday from Nathalie, a high-end Western store. The items taken ranged from from $300 to $15,000. Courtesy of the Antique Tribal Art Dealers Association 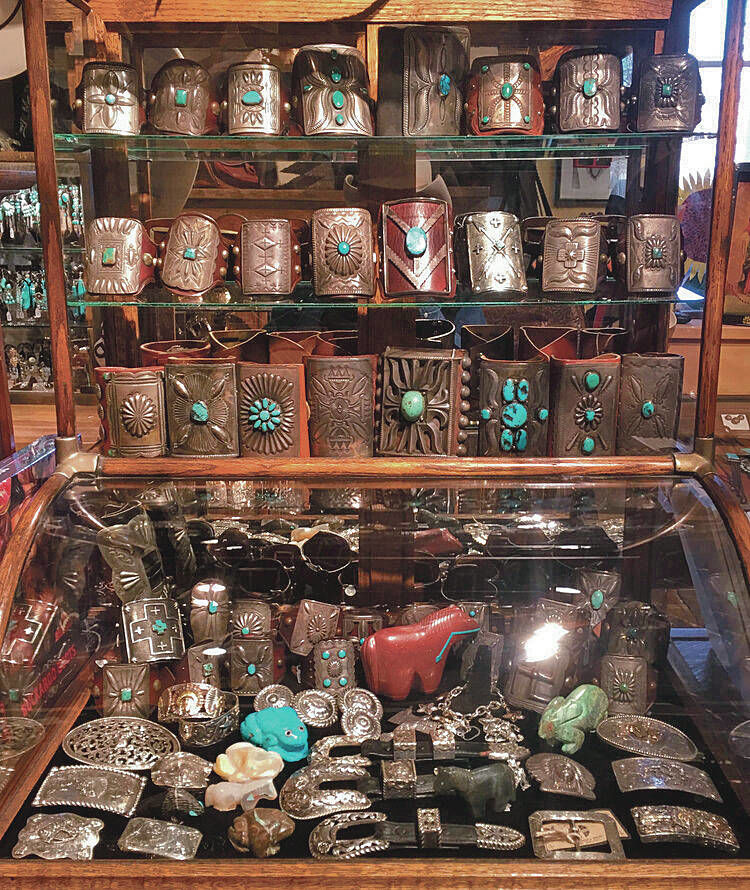 More than 30 ketohs, or bow guards, were stolen Monday from Nathalie, a high-end Western store. The ketohs range in price from $800 to $4,000. Courtesy of the Antique Tribal Art Dealers Association

Nathalie Kent, the owner of Nathalie, a high-end Western store which was burglarized Monday, says she lost more than $100,000 of merchandise. Danielle Prokop/The New Mexican

More than 100 belt buckles were stolen Monday from Nathalie, a high-end Western store. The items taken ranged from from $300 to $15,000. Courtesy of the Antique Tribal Art Dealers Association

More than 30 ketohs, or bow guards, were stolen Monday from Nathalie, a high-end Western store. The ketohs range in price from $800 to $4,000. Courtesy of the Antique Tribal Art Dealers Association

Nathalie Kent believes professionals were behind the burglary of her high-end Western boutique on Canyon Road, stealing more than 100 belt buckles and 30 pieces of Native jewelry at an estimated $100,000 wholesale loss.

“It was very neatly done,” she said Saturday, describing how a burglar broke a window at Nathalie, 503 Canyon Road, sometime after the store closed Monday and took the most expensive items. Padlocks were snapped and a display case was removed from the wall after opening a cabinet failed, Kent said.

“They were absolute pros,” she said. “They were very careful, they didn’t break anything. They maneuvered within the alarm — which is unbelievable.”

Kent said she saw only one person on surveillance footage, but thinks there may have been another person in a getaway vehicle. She said the footage is dark, but she was able to see a beam from a flashlight and a silhouette.

She said the burglar went straight for the belt buckle and ketoh displays, ignoring all the other jewelry and figurines. Ketohs are large wrist cuffs made of silver and inset with turquoise used by Natives to protect their wrists when shooting a bow. She also said the thief ignored the top shelf of buckles, most of which were of lower quality.

Insurance will cover the loss, Kent said, but many items are irreplaceable. Kent said her collection of antique rodeo buckles, some engraved or with gold filigree and precious gems, took more than two decades to collect.

“Many were engraved or inset with precious stones like rubies or sapphires,” she said.

Santa Fe police spokesman Greg Gurulé said there are no suspects and police are still investigating.

Kent has owned Nathalie for 25 years but had never been robbed, and she is still trying to inventory the loss.

“I printed out [pictures of] all my buckles and took the few that they left me and crossed them off,” Kent said. “That’s how I figure out what’s gone; what I have left — is not much.”

She said the support she has received in the wake of the burglary has been overwhelming. A personal collector donated four of his antique buckles to the store for display or sale. Two dozen deep pink roses were sent to the store from downtown businesses. People walked in and out Saturday, offering condolences and asking for updates.

Kent’s partner in both business and life, Jim Arndt, arrived on the scene after an employee opened the store to find the cases empty Tuesday morning.

“The door was still locked, but when I walked into the room, it hit me,” Arndt said, swiping a hand over his chest. “They were just gone.”

Arndt said they have asked pawn shops, other dealers and even smelters to watch out for the unique pieces. He said it’s unlikely the pieces would be melted down because they’re much more valuable intact.

Kent, a former fashion editor for French Vogue, said she often had input on the designs for the buckles and the ketohs. She said her only hope to get them back is if someone who discovers something and reports the information.

“I’m praying and praying that I’ll get them back when this is done,” she said.

The hatred expressed for this store owner on the FB page is astounding.

What the heck is wrong with you people?

To the FB page manager, thank you for taking down the idiotic and hateful posts.

How about mentioning the name of the alarm company so people will know to avoid using it?

good point about the alarm company.Nathalie, we are sorry for your loss.