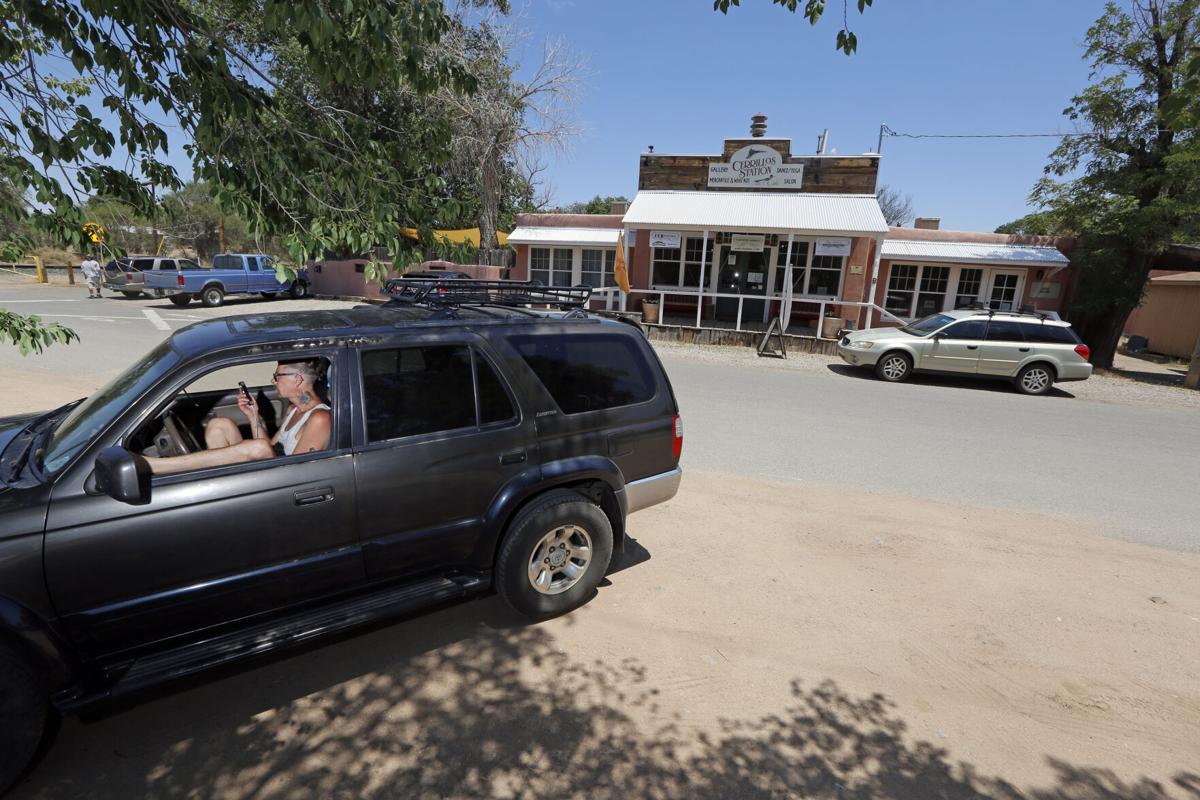 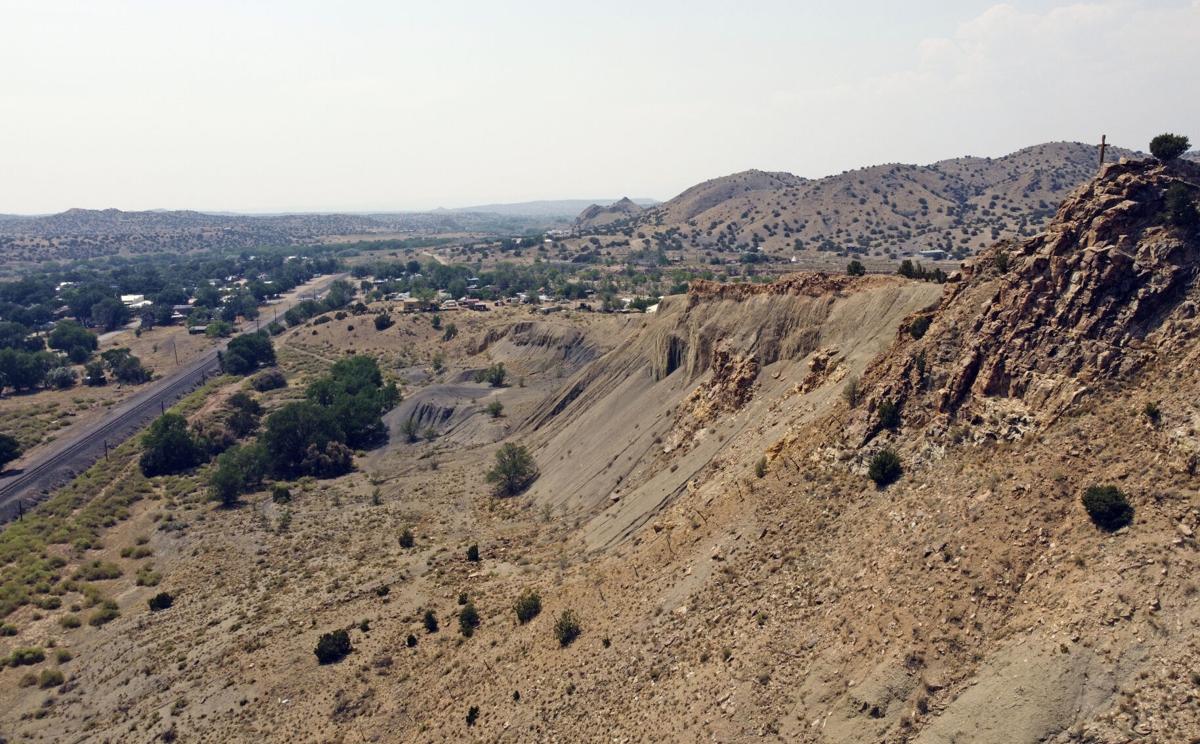 A cellphone tower is a possible addition for this area of Cerrillos. 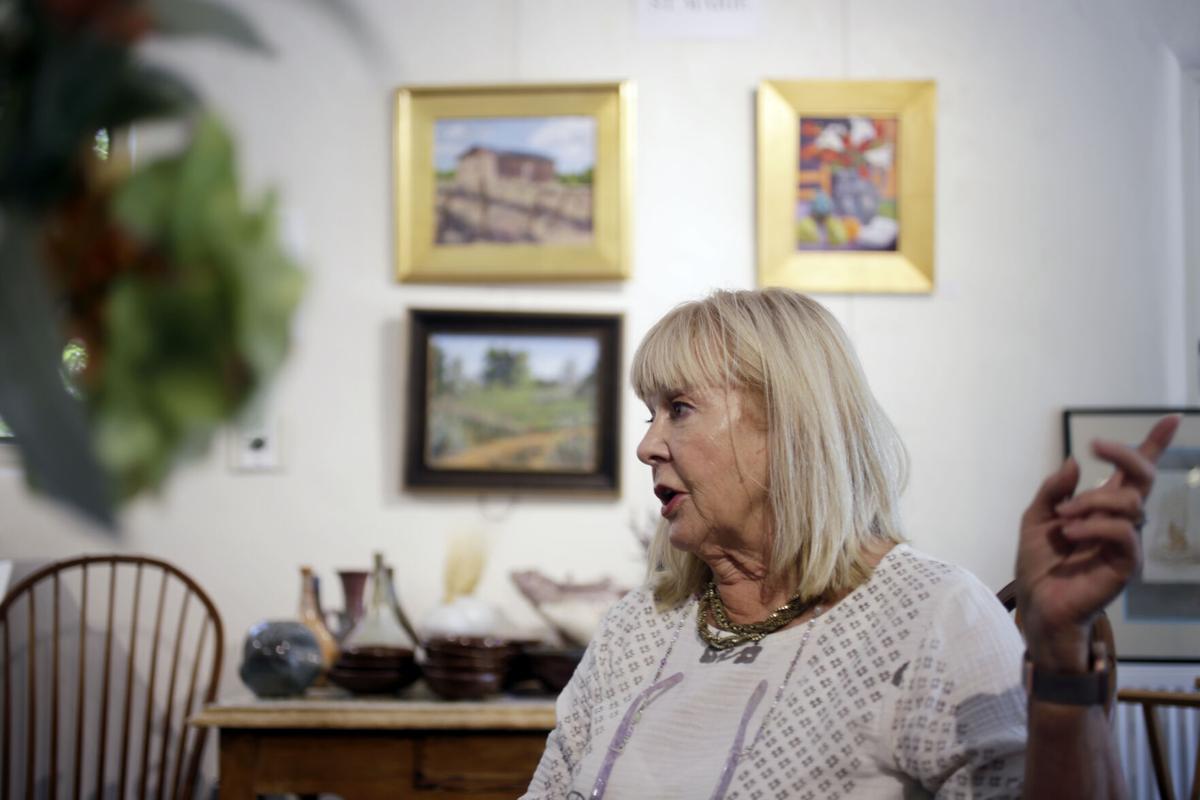 Barbara Briggs, owner of Cerrillos Station, speaks in favor of bringing more connectivity to the town during an interview Monday. 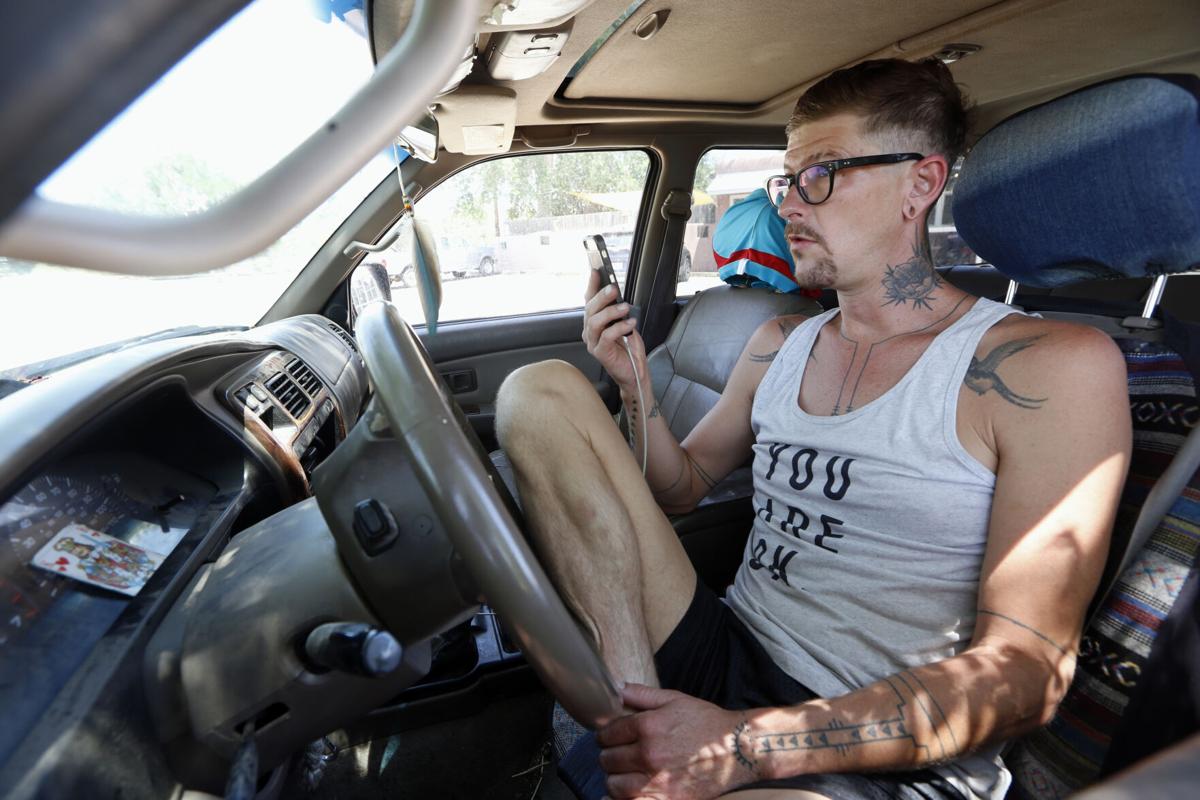 Cohdi Harrell of Cerrillos speaks on the phone outside the Cerrillos Station general store Monday. Harrell, who moved to the village a few months ago, has to come to the store daily to use its Wi-Fi.

A cellphone tower is a possible addition for this area of Cerrillos.

Barbara Briggs, owner of Cerrillos Station, speaks in favor of bringing more connectivity to the town during an interview Monday.

Cohdi Harrell of Cerrillos speaks on the phone outside the Cerrillos Station general store Monday. Harrell, who moved to the village a few months ago, has to come to the store daily to use its Wi-Fi.

CERRILLOS — On a recent afternoon, Cohdi Harrell sat in his car, phone in hand, outside of the Cerrillos Station general store.

For Harrell and a lot of other residents here, the store acts as a lifeline, or better yet, a phone line, to the outside world — the only place in town they can go to make a call.

Harrell, who moved to the area two months ago, said he knew poor cellular and Wi-Fi service was part of Cerrillos living, but he admitted the lack of communication is difficult.

“I come [to Cerrillos Station] and they are super-generous to have an open Wi-Fi for us to use,” Harrell said. “I can’t get Wi-Fi at my house. I either come here to talk to people or wait until I am in [Santa Fe].”

In more ways than one, this tiny place, located 25 miles south of Santa Fe, is a relic of the past. Much of the village still bears the look it had when it was a candidate for New Mexico’s state capital some 140 years ago.

Residents tend to like it that way, said Barbara Briggs, the owner of Cerrillos Station. Like Harrell, she said people typically move to Cerrillos looking for a slice of the Old West, with the understanding they might be lacking certain common amenities.

But that might change in the near future, and the tension between modern convenience and aesthetic intrusion has stalked townspeople in Cerrillos, where New Jersey-based Diamond Communications is seeking to construct a cell tower within the village. The tower would carry AT&T service and potentially other carriers if they rent space on the structure.

The tower might help solve some cellphone connection issues, but the proposal — first an 80-foot spire disguised as a tree and now a rustic-looking 60-foot faux water tower — has received pushback from some longtime residents who say it would spoil the beauty of the area.

Some residents have dealt with the lack of service by purchasing expensive booster equipment to make calls through their Wi-Fi services, an option not easily obtainable by some of the residents in town living on a fixed income.

Others purchase landlines, which can run about as much as a Wi-Fi contract in the area. However, that doesn’t solve the cellular issue.

The cell tower has been a work in progress for almost three years after the area was identified for lacking cellphone coverage, not only for AT&T but also Verizon and T-Mobile, said Thomas Waniewski, senior vice president of site acquisition for Diamond Communication.

FirstNet, an interagency communication system for first responders, also would be hardwired into the tower — although local fire departments have said they don’t intend to use it in the near future.

To erect a tower, not only does the site does have to fit certain height standards to make sure a signal spreads, but it also has to be near a power source and fiber optic cables. In Cerrillos’ case, the cable runs along the railroad tracks right next to Cerrillos Station.

A proposal to erect a 100-foot tower on nearby New Mexico Department of Transportation land was vetted, but the agency declined to lease the property after community pushback.

Ultimately, the company struck a deal to place the tower on a ridge off Vicksville Road, but that proposal — the very tall tree — was felled, mainly because it didn’t fit the surrounding shrubbery.

After the matter was discussed in a Zoom meeting, the project was shifted to the current water tower proposal.

Becky Walding, a 27-year Cerrillos resident, was a vocal critic of the proposal at the meeting. She said she’s not necessarily opposed to the tower, but just wants to make sure it fits the community.

She said she was not sold on simulated images of the tower shown by Diamond Communications, though she acknowledged the water tower proposal worked much better for her compared to other designs.

“I do know people who would really want the service,” Walding said. “By the same token, I would really like to see it in a place that it didn’t kind of hurt the atmosphere of the community.

“[Some residents] don’t care about the atmosphere of the community,” she added. “I do. I also care that they don’t have cell service. It’s a tricky one.”

Cerrillos resident Shakti Kroopkin said she recently purchased a property to use as a short-term rental with views of the proposed site and is concerned the tower would affect the evening vistas.

“My windows from my living room are looking right out at this hill, and every night at sunset, this hill turns colors. It’s a magnificent view, and this would destroy that completely,” Kroopkin said. “I am very disappointed to hear about this. I just bought the property in January; I am very against this. I am not against cell service, but I would like to know what can be done to find another location.”

Waniewski said the company inspected nine properties, but the key part of the calculus is finding a landowner who is willing to do business. At the meeting, he implored residents who know of a better location that fit the criteria to contact Diamond Communications.

He said residents often decide not to lease their land so they don’t antagonize their neighbors. Others have health concerns about having a tower so close to their homes.

Jesse Crews said the tower would be in someone’s way no matter what, and the community should come together for the greater good.

“It’s always going to be in someone’s view,” Crews said. “You can say right now, ‘Just put it somewhere else,’ until it’s in someone else’s view and we are back here and whittle it down until we screw over the least amount of people. At some point, we have to agree as a community that it’s going to be there. Does the public good justify agreeing on the best aesthetics, knowing it’s the best for the communal good?”

Liz Stronck agreed. She said she worries about some of her friends in the town without service.

“I have several neighbors and friend who actually walk over here to Cerrillos Station to use their phones,” Stronck said. “I have to go to a neighbor’s house because I have a cellphone to use their landline. Our service here, if you can’t afford a landline and can’t afford a booster, is pretty [expletive]. I am OK with the water tower, I think it blends in with the railroad concept here.”

Brooke Vigoda, who describes herself as disabled and on a fixed income, said she can’t afford a landline or Wi-Fi service. She also uses Cerrillos Station to use her government-issued phone.

When she goes to doctors’ appointments and office staff members ask for contact information, Vigoda said she has to inform them there is no immediate way to contact her if she is in Cerrillos.

She said she’s afraid one day she’ll be unable to contact anyone from her home in the case of an emergency.

Ruth Center, a health care administrator, noted there were a handful of village residents who could not be reached by health care professionals for telehealth visits during the throes of the coronavirus pandemic.

“I think it’s time to realize that there are people who cannot afford to make a phone call here,” Stronck said.

Waniewski said he expects the process to take four to five years to actually construct the tower, but hopes to submit an application to Santa Fe County later in the summer.

He said the next step is to study the feedback given at the meeting and to provide the community with more simulated images of the site.

Waniewski added he is inclined to hold another community meeting but is unsure of what new information he could provide.

Cerrillos resident Thomas Mcilhenney, parked outside of Cerrillos Station with his laptop, said no matter what is built, someone will be unhappy.

Most people in the village don't want it and this article emphasizes the (newly arrived, or from outside the village) ones who do. The village is not the appropriate location for this, and it being "forced" on us isn't either. I can turn off my wireless (btw wireless calling works fine here!) but never the tower, especially at about a tenth of a mile away. It's a "taking," rather than a "giving," and affects property values, viewscape, and possibly health (but we won't know, as that is off the table for discussion.)

Nicely done article. One of the most literal instances of nimbyism you could imagine.

If people protected their backyards the planet would be better off...where do you live?

does anyone still wonder why NM ranks last or near last in so many categories?

like - disguise it as an old fashioned (petticoat junction style) water tower? Maybe a mine headframe (even if there's no shaft under it? It is an old mining district and after years in Socorro myself I have to say I always found the headframe over the Trailer Shaft in Kelly to be picturesque.

When I was in South Africa, the cell towers were disguised as trees. This can be well or poorly done, but I would think with all the talented artists and sculptors around here perhaps they could come up with a plan that provides service without compromising aesthetics.

Yeah, an 80’ fake “Ponderosa Pine” wouldn’t look out of place at all…

Yes Cerrillos is beautiful and unique in all ways. But, if someone needs emergency medical help and you have no connection is it worth it to block a tower that could save your life. Or the home invader in the middle of the night. Hold it right there buddy I have to go down to the store to make a call. I moved here for the beauty of New Mexico but if they want to put a tower in my back yard go for it.

Ah, playing the old fear card 'What If'.....Hurry lock your door and hide under the bed,

Life might happen and remember by all means do not run with sizzors![scared]