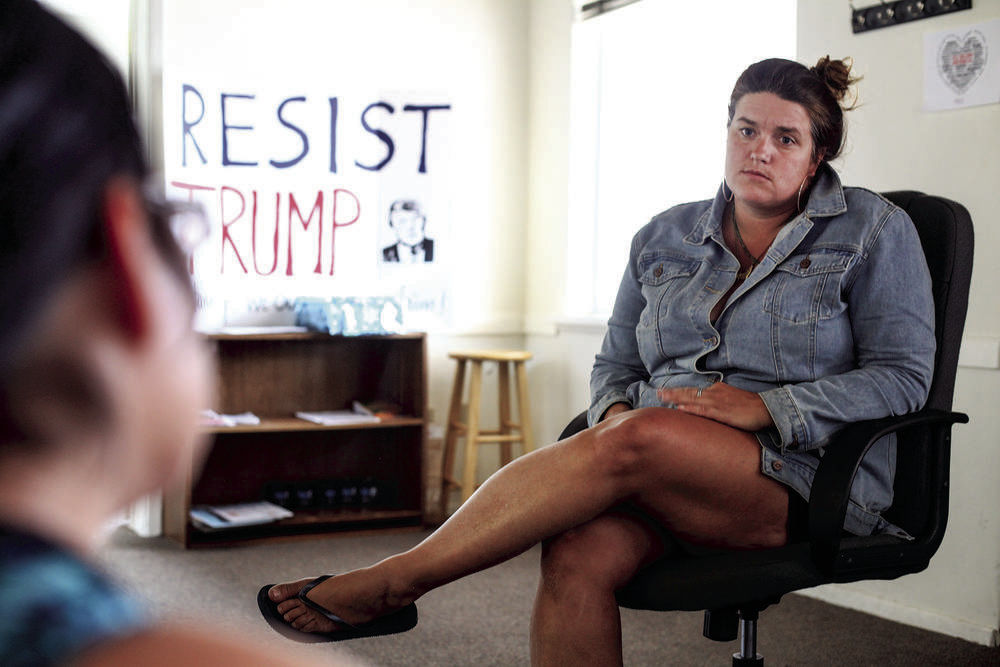 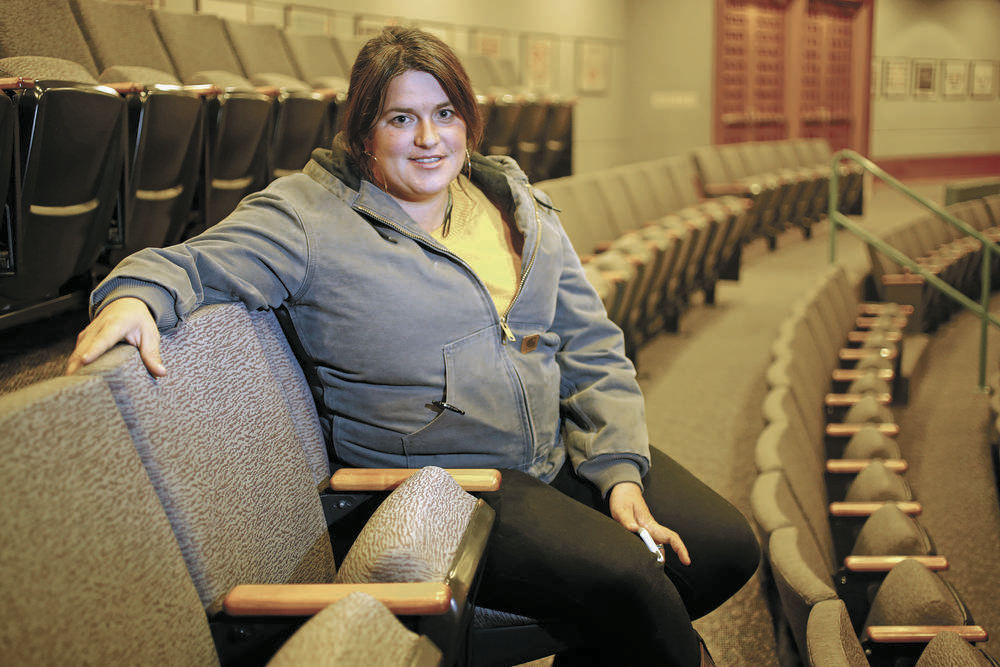 It looks like a regular thread on a Facebook page, but a closer look reveals the pain.

One woman describes her first panic attack, the kind that leads to uncontrollable, heaving sobs.

Another woman is in daily, intensive outpatient treatment for post-traumatic stress disorder.

A man writes: “Every joy, large and small, feels stolen and undeserved. The thing worse than that is the suspicion that because joy doesn’t belong, it won’t return at all.”

Next is Allegra Love.

“I feel like I am getting thrashed by a huge wave and not sure when I am gonna surface,” reads Love’s comment in the thread. “And then when I do I take a huge breath because another huge set of waves is right there to kick my ass again.”

You might think these commenters are direct victims of abuse. But for the most part, they’re not. They’re immigration lawyers.

The barrage of psychological and emotional suffering is the “vicarious trauma” attorneys from around the country say they experience after hearing cases of rape, torture and hardship suffered by their clients — many of them Central American and African migrants seeking asylum in the U.S.

“I’ve never seen anyone just be merrily working on the front lines of the immigration crisis,” says Love, an attorney and the executive director at the Santa Fe Dreamers Project, which provides free legal services to immigrants. “It’s super, super damaging emotionally.”

Such anguish would seem an unexpected twist for Love, one of New Mexico’s preeminent immigration lawyers — known throughout the city and the state’s legal community as an enthusiastic and sometimes brutally direct public speaker and advocate for immigrants’ rights. Only days ago, after all, she was honored as the Global Citizen of the Year by the Santa Fe Council on International Relations for her work on the immigration issue.

Yet speaking in her south-side office on a recent afternoon, Love, 38, opened up about her own sadness and anxiety while scrolling through the Facebook thread, which emerged after another immigration attorney asked her fellow lawyers to write a few sentences in order to raise money for emergency psychological care.

The first thing Love says, sitting down to an interview, is that she’s just returned from an appointment with her therapist and is noticing signs of depression returning.

It’d be natural to assume Love doesn’t want that detail printed in the newspaper, but she says, no, she’s actually fine with it. In fact, she wants it in the story because she thinks it could help others.

“It’s devastating how rampant and severe the emotional damage is that’s happening to the people I work with,” she says. “And so if the very least I can do is be honest about the depression I suffer, which is 100 percent related to work, and maybe it can convince them to take their mental health seriously.”

Being an immigration lawyer has never been an easy job.

It wasn’t easy when federal authorities under the Obama administration began holding detained migrant adults and children in a detention center in Artesia in 2014, and Love went down to try to help.

It wasn’t easy when she founded the Dreamers Project soon afterward on a shoestring budget with the goal of helping young undocumented immigrants benefit from the Deferred Action on Childhood Arrivals program. And then the organization expanded to help victims of violence.

But in the era of the Trump administration’s immigration policies, the job for Love and other immigration attorneys — at least those willing to take on cases for free — has become much harder.

“It’s sometimes hard to feel things,” Denver-based immigration lawyer Christina Brown said in a story that appeared in September on the American Bar Association website. “And as there’s no end in sight right now, I just have to separate myself and continue to do the work.”

El Paso attorney Linda Rivas, who focuses on serving asylum-seekers who are awaiting El Paso court dates while being required to live in Mexico through a program known as Migrant Protection Protocols, works with clientele in somewhat different conditions than Love does. But the strain is similar.

And perhaps, getting harder.

From immigration raids to last year’s family separations at the border to a spike in the number of asylum-seekers detained at facilities nearby, the changing political landscape has altered the mission of Love’s organization. It still does what it used to do, but now it is spending a lot of time trying to get migrants out of detention.

“Trump got elected and we had to pivot,” Love says. “Before, I felt like our organization was behind folks, pushing them forward and giving them a boost. All of a sudden, I felt like I was standing between my clients and the U.S. government. And it’s been intensifying ever since.”

This year, the Santa Fe Dreamers Project has responded by helping to build a new initiative called the El Paso Immigration Collaborative.

Faced with an increase in the number of immigrants detained in ICE facilities in New Mexico and West Texas, and the near impossibility of sending individual lawyers to represent them all, the effort aims to build a system that can represent more detained immigrants.

The collaborative, which Santa Fe Dreamers is creating along with a number of regional and national partners, generates data profiles on migrants detained in the El Paso area and refers their cases to volunteer lawyers across the country who can represent them without having to travel to the region.

EPIC, the program’s acronym, now has nearly 500 detained people in its system and around 50 have so far been matched with attorneys.

“I can go in and represent someone and it will take a week to get them out, but that’s not what we’re trying to do,” Love says. “We’re trying to make a scalable system that can actually work to represent a few thousand people in any given year.”

As the collaborative ramps up, Love’s focus has largely turned to the Dreamers Project’s recently opened office in El Paso. Accordingly, she needs to increase her fundraising to $1.2 million this fiscal year compared to some $750,000 for last year.

When Love left her previous job at Santa Fe Public Schools — she worked as a teacher at the former Agua Fría Elementary and in the Adelante program for homeless youth — and began devoting herself full time to representing migrants, she says it only took three or four months before she started having panic attacks.

They stemmed from incidents of rape and torture she would hear about from her clients. Story after story after story. Initially, she was afraid to talk about it, and it took her a year and a half to start seeing a therapist. Her first diagnosis was PTSD.

“You’re holding the hand of someone in court who’s testifying about having a car battery hooked up to their testicles,” Love says. “And that’s a really hard thing to witness, even secondarily.”

When the stories became too much, her natural response was to fade out.

“If I start spinning out listening to them talk about the 48 hours of gang rape they experienced and I start disassociating because that’s really hard to hear and my mind is trying to protect myself, I’m not going to be the best lawyer for them,” she says.

In her office, some sort of ding goes off every couple of minutes. Could be a text message, a phone call or an email. Often the noise is followed by a groan from Love. It’s usually someone who wants something. Everyone wants something. A person with a potential client in Albuquerque. Someone in need of assistance in El Paso.

Still, Love laughs a lot, even over mundane questions like where she’s from.

“I usually say Wyoming, but the real truth,” and she lowers her voice to a whisper, “is I’m from New Jersey.” And then she lets out a loud laugh.

There are the reminders that come all too often — the indications that even though she and her colleagues are working hard, immigrants as a whole aren’t better off. In fact, they might be in a tougher spot than before.

“It’s like trying to hit a curveball while an earthquake is going on,” she says. “You have no idea what is going to happen.”

On top of that, Love has had disparaging comments and insults hurled at her on social media on a regular basis. It often happens after news articles mention her, she says.

Some are misogynistic; some insult her physical appearance; some don’t even reference her immigration work, even though that’s the likely trigger. She even received death threats several days after Fox News included her in a segment about migrant caravans in Mexico.

With all this adversity, what keeps Love going?

“An enormous amount of hope and ego,” she says, laughing again. “I feel chronic hope and acute depression. Does that make sense?”

It's not the political climate she's up against. It's the rule of law.

I admire Allegra and what she does and I understand what she is going through, especially that I am a founder of a nonprofit myself. The successes are always short-lived, the critics are more outspoken than the beneficiaries, someone always wants something when there is a long list of other important tasks due always. Everything is time sensitive, and the people we serve are waiting! Not to mention all the external factors that affect our work. In addition, Alegra and her staff are working on a lot more emotionally charged cases than we do, and my advice is that they need to focus on what is humanly possible for them to do. Focus on specific geographical area, or on certain demographics like immigrants from certain countries or on children and their parents, etc. Just because you can help everyone doesn’t mean you jump in to help everyone, because in that jump, you might hurt yourself. You need to have some reserve of energy to be able to continue on. Figure out where that reserve can come from. You need to be strategic and not reactive to the circumstances around you no matter how tough and infuriating those circumstances are. Alegra, we love having you in our community and we’re with you.