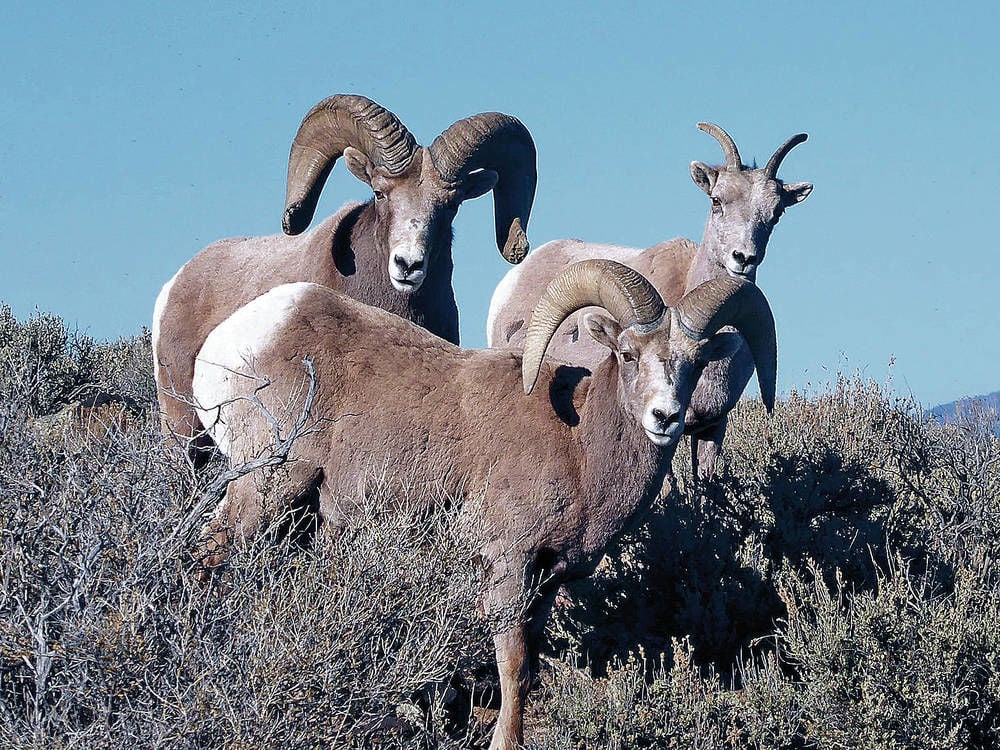 Bighorn sheep gather on the Rim Trail near the Rio Grande Gorge Bridge in early March. The state Department of Game and Fish is allowing licensed hunters to cull up to 48 ewes in the gorge this month. Photo courtesy Kevin Bersell 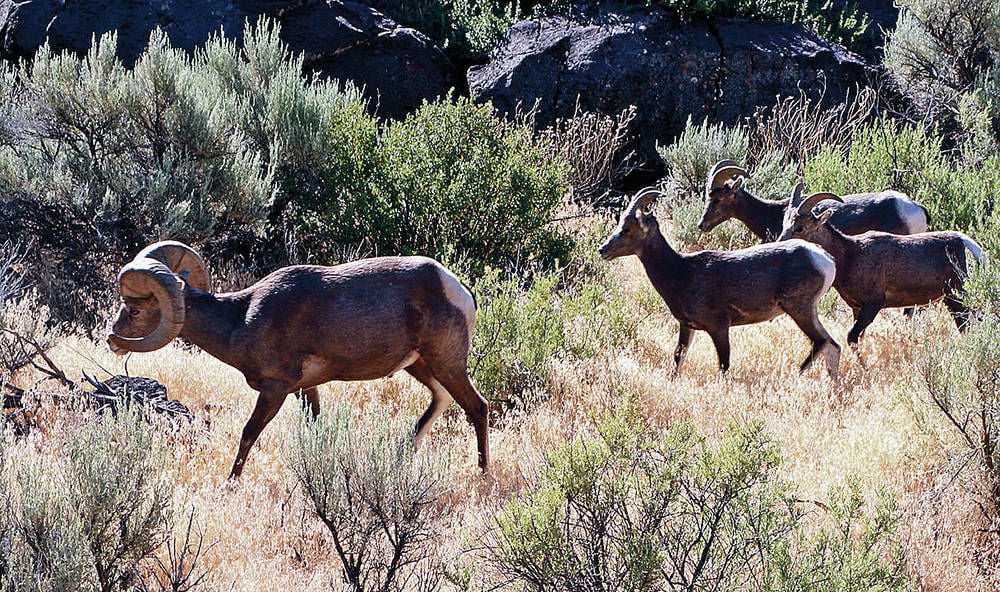 Bighorn sheep gather on the Rim Trail near the Rio Grande Gorge Bridge in early March. The state Department of Game and Fish is allowing licensed hunters to cull up to 48 ewes in the gorge this month. Photo courtesy Kevin Bersell

TAOS — Over the past three weekends, a few hunters have had the opportunity of a lifetime along the rim of the Rio Grande Gorge: the chance to harvest a Rocky Mountain bighorn sheep.

By the end of this weekend, nearly 50 ewes will have been killed, reducing by at least an eighth the population of the healthiest bighorn herd in the state.

The special hunts are the latest move in a developing strategy by the New Mexico Department of Game and Fish to keep the herd’s population in check and the threat of a catastrophic disease at bay.

Yet some bighorn advocates and locals who use the gorge area are criticizing the hunts over both long-term implications for the herd and safety concerns in the popular tourist area.

Although bighorns are native to Northern New Mexico, they were wiped out, primarily through hunting, more than a century ago. Taos Pueblo led the effort to reintroduce Rocky Mountain bighorn sheep to the Rio Grande Gorge in 2005.

Fewer than 25 sheep from a herd in the mountains above the pueblo were trapped and moved to the steep river landscape, a canyon at places 800 feet deep. The state Game and Fish Department added sheep from the Pecos mountains to the herd in 2007.

Now, the herd population is between 350 and 400 animals, making it one of the most robust in the West.

Melissa Cain, the bighorn campaign coordinator with the Western Watersheds Project, called the gorge herd “remarkable” for thriving in its native landscape.

“There are so few places in the West that provide secure [bighorn] habitat … that resembles their historic structure and distribution,” she said.

According to emails and documents on efforts in January to cull the herd, as well as an interview with Stewart Liley, chief of wildlife management for the state Game and Fish Department, the herd grew to be so large and dense that bighorns started to wander, expanding their range farther than anything seen in the past 12 years.

“As the occupied habitat gets filled in, we’ve seen more forays into new areas,” Liley said.

According to an email from Eric Rominger, a bighorn sheep biologist with the state department, bighorns from gorge herd have been known to move to the Pecos Wilderness herd and the Wheeler Peak herd, and on to the Red River herd, the Latir herd, the Culebres herd in New Mexico and on to the Culebres herd in Colorado. The linked populations number nearly 2,000 sheep, Rominger said.

While their movements are in some ways a testament to the wild sheep’s success in the gorge, it has put the herd at an even greater risk of a catastrophic die-off through exposure to bacteria and viruses carried by domestic sheep.

All it takes to infect an entire herd of bighorns is one nose-to-nose encounter with a domestic sheep, Liley said.

Native North American sheep — both Rocky Mountain bighorns and desert bighorns — have never developed immunity to diseases carried by domestic sheep. One type of pneumonia from domestic sheep has led to bighorn herd die-offs of up to 90 percent.

While the threat of diseases has been on state biologists’ minds since the gorge herd was established, the threat became critical last year when bighorns were seen too close to domestic herds.

In July 2017, two rams, presumably from the gorge herd, were seen trying to “commingle” with a herd of 3,000 domestic sheep north of the Colorado state line, according to a document emailed among department staffers.

“These rams were chased hard by the helicopter and showed no signs of respiratory illness,” the memo read.

Liley said a more troubling incident occurred in January in the herd’s southern range near Pilar.

Although some bighorns were previously seen within 100 yards of a domestic herd near Rinconada, according to emails, the January sighting of nine bighorn sheep in a “no sheep” zone put the state department on high alert, authorizing employees to cull some bighorns, essentially on the spot.

The sheep were on the east side of N.M. 68 between Pilar and Rinconada.

The employee who spotted them didn’t have enough daylight left to immediately euthanize the animals, according to an email. But the following day, department employees shot three rams, three ewes and a lamb that were in boulder and scree fields. It took them three hours to remove six of the carcasses.

Though lab results showed those sheep tested negative for the domestic pathogens, Liley called it a cautious management approach, saying “it wasn’t worth risking the entire Rio Grande herd.” He said the department made the decision within “a matter of hours,” and emails reveal a sense of urgency.

Nicole Quintana, a big game manager, recommended that even after the initial cull, a wildlife manager check both sides of the canyon each morning and report back to superiors.

But the department had been trying to figure out a long-term strategy to bring the gorge herd population down to 300 to 350 animals. Capping the herd, they reason, is the best way to minimize bighorn contact with domestic sheep and keep the population from growing so large it starts running out of habitat and food.

According to an email from Rominger, the two best strategies for controlling the population were trapping and translocation — using nets and helicopters — or implementing ewe hunts.

Liley said the department tried trapping in the gorge to install radio collars on two occasions, but it did not work.

The terrain makes the gorge impractical and dangerous for helicopter pilots and sheep alike.

Now the state is considering opening the Rio Grande Gorge to annual ewe hunts between 2019 and 2023. The state currently has a drawing for four ram tags in the gorge each year. The proposal will be heard by the State Game Commission for the final time in May.

While top-level decision-makers in the Game and Fish Department will decide whether to implement a ewe hunt, officials authorized up to 48 ewes to be killed this month as a way to quickly decrease the population.

The herd can double in size every three years, Liley said, and his department expects about 125 lambs to be born this year.

Hunters can check a box on their permit applications to be on a waitlist for special hunts. It’s from that list that the 48 hunters — 12 for each weekend of March — were invited to participate in a semi-escorted hunt with department biologists.

Some question the tactic of killing bighorns to protect the herd.

The Bureau of Land Management, which oversees the Rio Grande del Norte National Monument and some grazing allotments within it, should reduce risks of bighorn-domestic sheep interactions “by removing domestic sheep from bighorn sheep habitat,” she said.

The native sheep ought to be prioritized over domestic sheep, she argued.

“The bighorn herds are far more appropriate in the gorge than the domestic sheep operations. It’s time that management catches up with the science and the cultural values of the 21st century,” Cain said.

Dawn Kohorst, a vendor at the Rio Grande Gorge Bridge on U.S. 64, raised another concern. She told The Taos News that a pair of hunters were staking out and spooking sheep within a few hundred yards of the bridge and the West Rim Trail on March 17. She later took a photo of the hunters quartering and dressing a sheep they bagged.

“It’s too much of a tourist area,” she said, noting there were no signs alerting hikers and tourists of the hunt.

This story first appeared in The Taos News, a sister publication of The Santa Fe New Mexican.