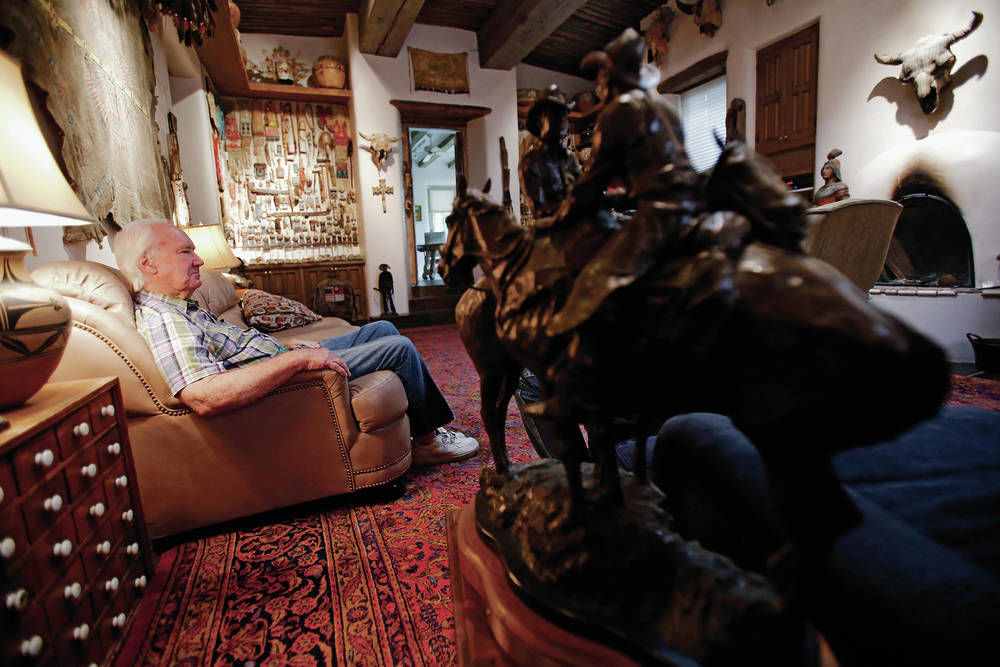 Forest Fenn sits in his study on Monday. Fenn says he’s not calling off the treasure hunt that has led to at least four deaths and now the arrest of a man accused of breaking into Fenn’s home. Fenn said even if he wanted to, at his age (88) he’s no longer in physical shape to retrieve the treasure. Luis Sánchez Saturno/The New Mexican 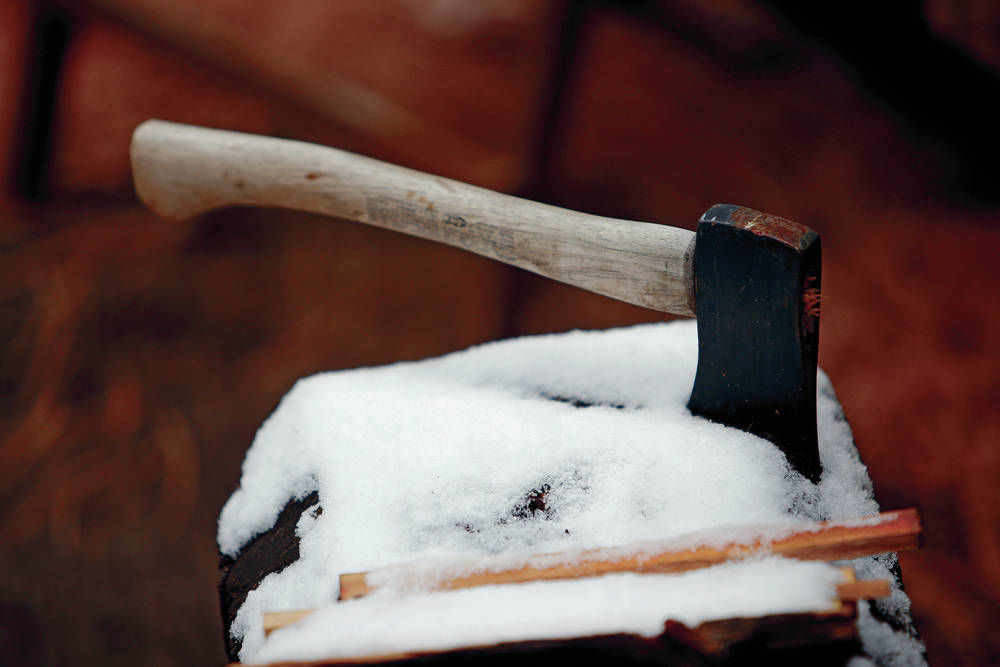 Police say Robert Miller used this hatchet to break into Forest Fenn’s house Friday. Police said the man thought the author’s treasure was hidden in his home. Miller was arrested, and Fenn wants to remind other hunters that the treasure is in the mountains north of Santa Fe, not in his home. Luis Sánchez Saturno/The New Mexican 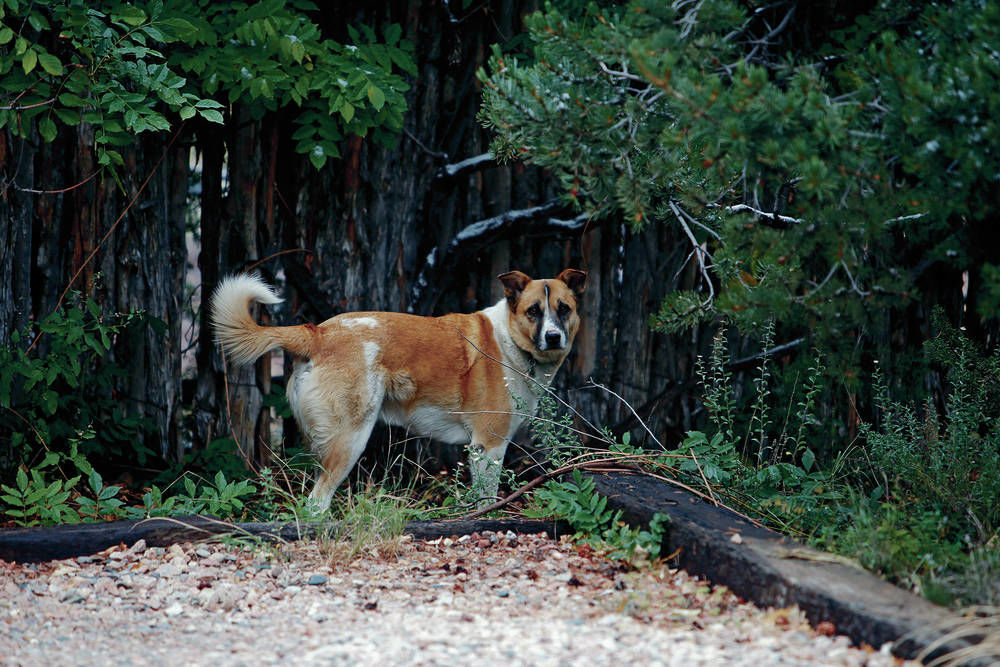 Boss, Forest Fenn’s guard dog, walks the property on Monday. Fenn’s house was broken into over the weekend by a man who thought Fenn’s treasure was hidden in his home. Luis Sánchez Saturno/The New Mexican 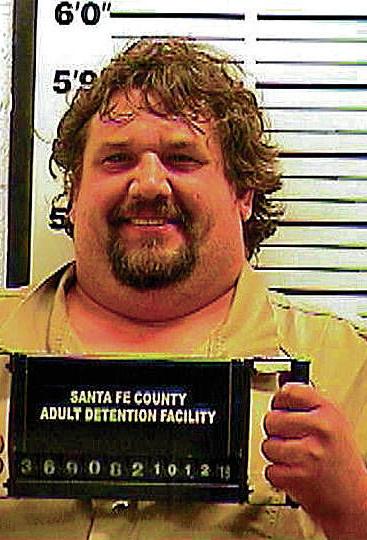 Treasure hunters, beware: If you break into Forrest Fenn’s house looking for his famous fortune, Santa Fe police will come after you.

And some of his family members.

A Pennsylvania man learned that the hard way when, according to a police report, a lawman, Fenn and one of his daughters armed themselves to confront the intruder as he tried to haul away a chest Friday evening from a guest house at the east-side property belonging to the noted antiquities dealer, collector and author.

Fenn said he had a pistol loaded with buckshot. One of Fenn’s daughters held a .38-caliber revolver. And a police officer who arrived at the scene drew his service weapon.

The report said the suspect, identified as Robert Miller, 41, had been carrying a Spanish-style chest, which, he later told police, he thought held treasure that Fenn wrote in his memoir The Thrill of the Chase he had hidden somewhere north of Santa Fe in 2010.

The chest actually held only linens and towels, Fenn said in an interview Monday, and was not locked, and thus he is baffled that Miller “evidently thought it was the treasure.”

Police arrested Miller on suspicion of burglary, breaking and entering, and criminal damage to property. Online records show he was released from jail Sunday evening. As of Monday evening, no court date had been set.

Fenn said that while he had called 911 on three previous occasions when strange people were milling about outside his property and possibly trying to get in, it was the first instance when someone forcibly accessed his residence.

Miller evidently didn’t see it that way, according to the police report, which said that upon reading a poem in Fenn’s book that Fenn said contains clues about the treasure’s location, Miller believed the booty was hidden in “the hole of brown.”

Miller interpreted that as referencing the small wooden gate next to Fenn’s main driveway.

Miller, the report said, kicked in that pedestrian entrance to gain entry to the property.

The suspect also told police he thought the poem refers to a Sog, a brand of ax, so when he saw a hatchet sticking in a tree stump outside the guest house, he used that tool to hack away at the front door to the guest house, breaking it down.

Miller told police that since the poem references a treasure box, he assumed the chest he found inside was it, and he took it because his “family is struggling financially” and he only has $130 in the bank.

Fenn was returning from a dental appointment with one of his daughters around 5:30 p.m. Friday when they said they spotted Miller carrying the chest outside.

Another of Fenn’s daughters, Zoe Old, who lives near her father, quickly arrived, armed with a revolver, which was “at the low ready,” as she confronted Miller, according to the police report. Fenn said he went into his house and grabbed a pistol.

He and his daughter held Miller at bay as they awaited police.

Fenn said Miller cried and kept apologizing. Fenn told The New Mexican he later discovered Miller had helped himself to a beer while inside the guest house.

Santa Fe Police Department documents show that Miller’s sister, a corrections officer in Pennsylvania, emailed the department Sunday after learning that her brother had been arrested.

“I honestly don’t know what would possess him to do anything like this and believe me, I am not happy at all with this stupid treasure everyone is infatuated with or the fact that he went to this extreme for it,” she wrote of her brother, whose hometown is listed by Santa Fe police as Pine Grove, a small community in east-central Pennsylvania. “My family and his wife and kids are just very much worried about him and his health.”

She went to to say Miller has diabetes, a ruptured hernia and takes blood pressure medicine.

Fenn, 88, said he hid his treasure as a way to tempt people to get into the wilderness and give them a chance to launch an old-fashioned expedition for riches.

Many people have taken to the hunt, some obsessively so, evidently convinced the allure of the fortune is worth any risk. At least four people have died searching for the treasure. Others have depleted life savings, spending thousands of dollars seeking the fortune.

Earlier this year, for example, another Pennsylvania man, Scott Conway, was cited by New Mexico State Parks officers after he dug a large hole on state land near Heron Lake in search of the cache.

Asked if he would call off the hunt to deter such potential threats and diminish the chance for personal harm, Fenn repeatedly shook his head “no” on Monday. He said even if he wanted to, at his age he’s no longer in physical shape to retrieve the treasure.

Though Fenn’s mongrel dog Boss was roaming the property Friday afternoon, Fenn doesn’t think the canine was much of a deterrent.

“He probably licked the guy’s hand,” he said. “But then he barked at the police when they showed up.”

Story about Fenn’s treasure to be TV show