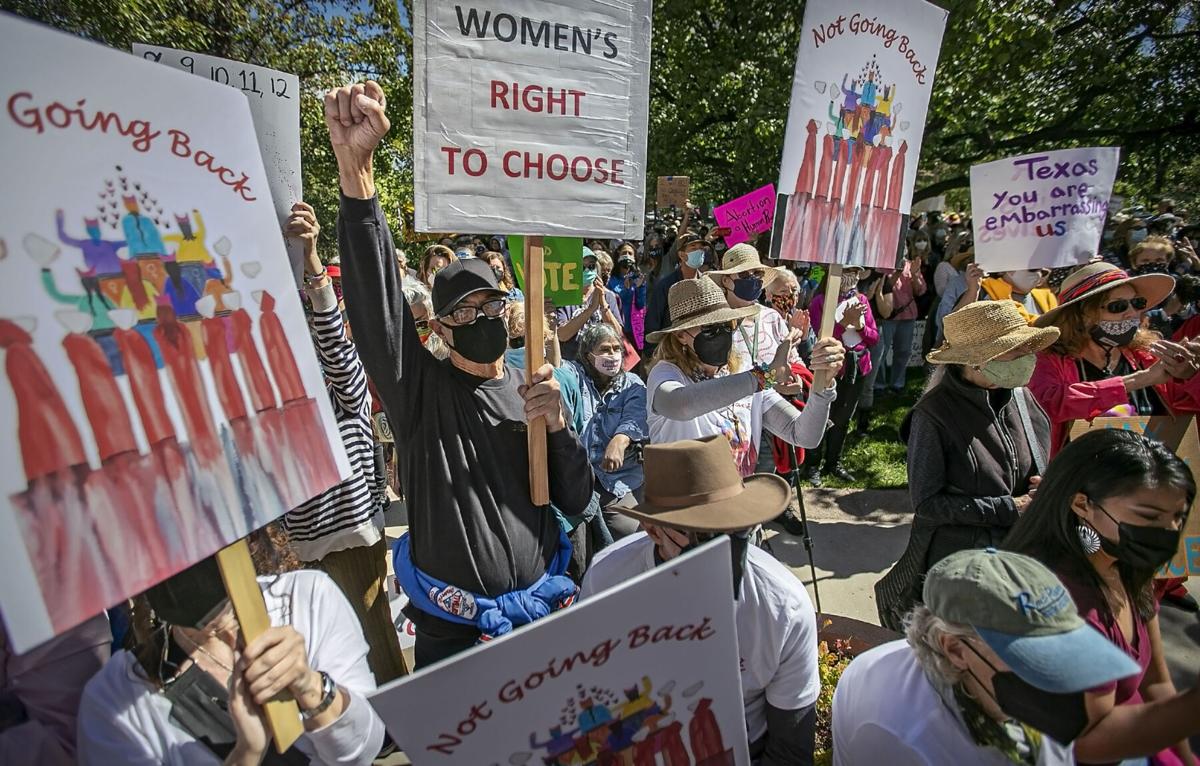 Activists rally Saturday at the Roundhouse in support of women’s rights and against a new Texas law banning abortion after about six weeks of pregnancy. 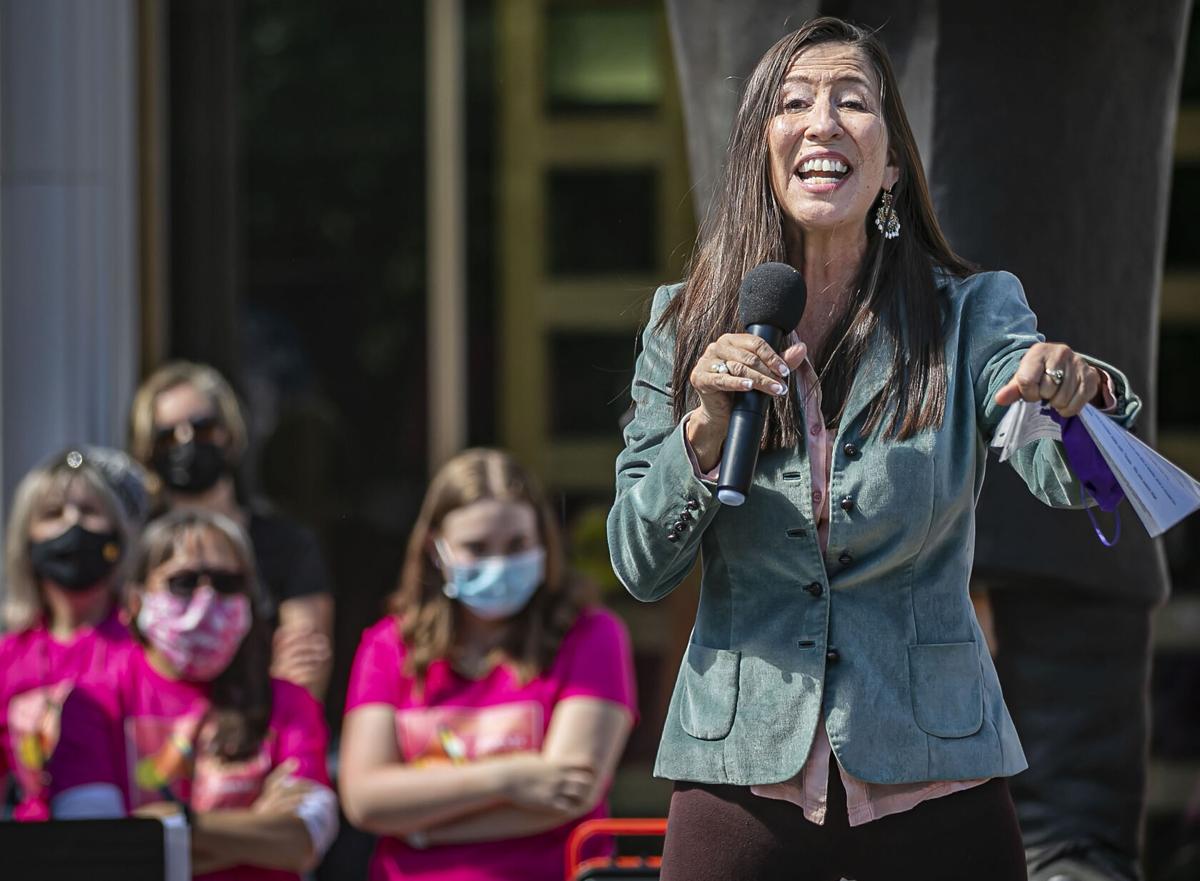 Activists rally Saturday at the Roundhouse in support of women’s rights and against a new Texas law banning abortion after about six weeks of pregnancy.

Hundreds of people rallied to call for stronger protections for reproductive rights Saturday morning in front of the Roundhouse.

The rally was organized by Women Warriors, a Texas-based activist group focused on fighting that state’s “heartbeat bill,” Senate Bill 8, which prohibits most abortions after about six weeks of pregnancy or when a fetal heartbeat can be detected. The law took effect in September.

Many at the rally said they were also concerned about the fate of Roe v. Wade, the landmark 1973 case that legalized abortions throughout the country as a constitutional right.

The Supreme Court is set to reconvene Monday, and challenges to the ruling are on its agenda.

Others said it wasn’t just abortion protections they were rallying for but overall reproductive rights for everyone.

The rally was one of about 600 such events held across the country Saturday to demand access to legal, affordable and accessible abortion, according to news reports.

Ivy Stern, board chairwoman of Planned Parenthood of the Rocky Mountains in Denver, said that in the first week after Texas’ abortion law took effect, the organization experienced a fourfold increase in patients from Texas, and Stern implored people to fight against similar bans being discussed across the country.

Bethany Custard, a Texas-born Santa Fe resident, spoke after Stern and said she is “mad as hell” about the lack of attention to reproductive education she and her siblings received in Texas.

She said she spoke at the rally to support women in Texas who don’t have the ability to speak up for themselves.

”I am still outraged for the mothers and the sisters and the allies in my hometown in my state; they can’t even make a choice about who they are and what they do about their bodies,” Custard said. “And I am mad.”

No counterdemonstrations were visible at Santa Fe’s rally.

Law enforcement was on the scene but mostly stayed in a nearby parking lot.

Webber said not only will New Mexico avoid “turning back the clock” on abortion rights; it cannot “afford to turn back the clock.”

”We are going to stand strong for women’s rights, and they are not just reproductive rights,” he said. “They are economic rights; they are social justice rights. They are the rights of women to stand up and be equal in every part of our community.”

Gov. Michelle Lujan Grisham in February signed a bill overturning a nearly 50-year-old ban on abortions in New Mexico. The long-dormant law would have taken effect if the Supreme Court opted to overturn Roe v. Wade.

Lujan Grisham, a guest at the rally, gave a short speech reiterating her commitment to supporting reproductive and abortion rights in New Mexico.

”I want to be very clear: I know what is at stake and what did I say I would do? I would fight like hell,” she said, drawing strong applause.

Interesting that Joseph Tafoya’s comments denigrating the age and appearance of women at the protest have been taken down but made it to print in the Tuesday newspaper. He tries to reinforce the tired idea that women are only of value as childbearing vessels. Of course, he as a man is entitled to sit in judgment over all women, whether he has anything to offer anyone or not. Typical old man nonsense. A woman is a person; a rice-grain-sized bundle of cells is not. Women who have access to family planning are crucial to a functional economy and viable middle class, both of which we must have if we are ever to attain true democracy. ‘Pro-lifers’ don’t care about any of that. Denying healthcare to women and families is about controlling people and pretending one religion rules us all, which by the way it most certainly does NOT.

Obviously, aborting a pre-viable fetus is not murder or we would be charging every abortion provider with murder. Your comment and three bucks gets me a cup of coffee.

Never fails that this topic brings out a food fight between the sides, eh?

People here mention Roe, but I thought Casey v Planned Parenthood was now the law of the land since it modified Roe to consider viability.

Oops, I got that totally wrong. Roe v Wade was about viability.

103 (c) For the stage subsequent to viability, the State in promoting its interest in the potentiality of human life may, if it chooses, regulate, and even proscribe, abortion except where it is necessary, in appropriate medical judgment, for the preservation of the life or health of the mother.

(a) To protect the central right recognized by Roe while at the same time accommodating the State's profound interest in potential life, see, id., at 162, 93 S.Ct., at 731, the undue burden standard should be employed. An undue burden exists, and therefore a provision of law is invalid, if its purpose or effect is to place substantial obstacles in the path of a woman seeking an abortion before the fetus attains viability.

(b) Roe's rigid trimester framework is rejected. To promote the State's interest in potential life throughout pregnancy, the State may take measures to ensure that the woman's choice is informed. Measures designed to advance this interest should not be invalidated if their purpose is to persuade the woman to choose childbirth over abortion. These measures must not be an undue burden on the right.

(d) Adoption of the undue burden standard does not disturb Roe's holding that regardless of whether exceptions are made for particular circumstances, a State may not prohibit any woman from making the ultimate decision to terminate her pregnancy before viability.

(e) Roe's holding that "subsequent to viability, the State in promoting its interest in the potentiality of human life may, if it chooses, regulate, and even proscribe, abortion except where it is necessary, in appropriate medical judgment, for the preservation of the life or health of the mother" is also reaffirmed. Id., at 164-165, 93 S.Ct., at 732. Pp. ____.

Sorry about that. Lucky I'm not taking a law school exam...

It is interesting the Roe baby, who her Mom wanted aborted and failed to get that done before she was born, has been making the talk show circuits telling her story. Seems odd that many in the left wing MSM are all over the story, when in fact, the person in front of you would not exist if her Mom had gotten her way and Roe v. Wade was settled law. How is that story a positive lesson for abortion?

My mom, single at the time and on her own as my own sperm donor hit the road, carried me to term in a Catholic home for unwed mothers. She had the support of the Church and of her own mom, who moved in and raised me as a little kid as my mom went back to working two jobs. My earliest memories are more of my maternal grandmother running the household and taking me to Mass than of my own mother, who worked days as a legal secretary and sang in a band at night. Not sure where she got the energy, but I guess I inherited some of it.

Mom's been deceased for about thirty years now so I have no problem discussing her situation. I'm sure no one Upstairs is displeased with her. Could every working mom finding herself pregnant have that level of support, this could be a non-issue.

How many of those TX legislators or brazen commenters are willing to put their money and their efforts where their mouths and votes are?? Probably very few, I'd suspect. Its easier to grandstand than to Stand and Deliver. I'm not one to shoot my mouth off on this too loudly in either direction for reasons I think I just explained.

I agree Khal, if support and help were available, abortions would be less of an option, but I do wonder how many abortions happen because the Mom gives up without having the discussions and searching for resources. Not sure laws of any kind can solve these issues.

Nothing like the abortion issue to bring out the fanatics and the men with no clue.

Perhaps if he were to declare himself a woman, his opinion would become valid.

I guess you are not familiar with the" U.S. Consitution"! It pertains to the individual and is gender-neutral.

Joseph Tafoya's ignorance on this very important "Women's" issue is astounding. I strongly support mandatory and reversible vasectomies for all males beginning at age 13.

Hey, Russell. I think if the "undue burden" standard is good for abortion law (and I think Roe and Casey are fine), it should be good for gun licensing law.

Maybe everybody ought to move to the center for a change. The problem with the NYS law (and others like it) is that the decision is highly political and in the hands of those who are likely to oppose granting a permit. Kinda like abortion in some red states, where the state government is likely to make it as hard as it can for a woman to exercise a right.

Heller overturned the most restrictive law in the nation. I expect the justices to not go to the other extreme but to let most laws stand, such as New Mexico's concealed carry law.

[thumbup] And our great open carry law, that Texas just passed and it was called an open invitation to murder by the left wing in Texas.

"Reproductive Freedom".....?? a bit of a deliberate exaggeration and misleading term, no doubt to fool people that this is only about abortion.

Your rights end when another’s begin

Yes. Another PERSON’s rights. A fertilized egg at six weeks is not, and will never be, a person. Every woman requiring healthcare services is a person.

It's an apt term and your opinion on this is the least valuable of anyone's.

Agree with you that there are so many other ways that the GOP tries to oppress women and others, that reproductive freedom (i.e. keeping ignorant male noses out of our privates) is merely one of the abuses that the GOP seeks to inflict upon those it wants to enslave.

Things always get interesting when the hypocritical Right chimes in.

Someone that you inadvertently omitted and was one of the first speakers was State Senator Liz Stefanics.