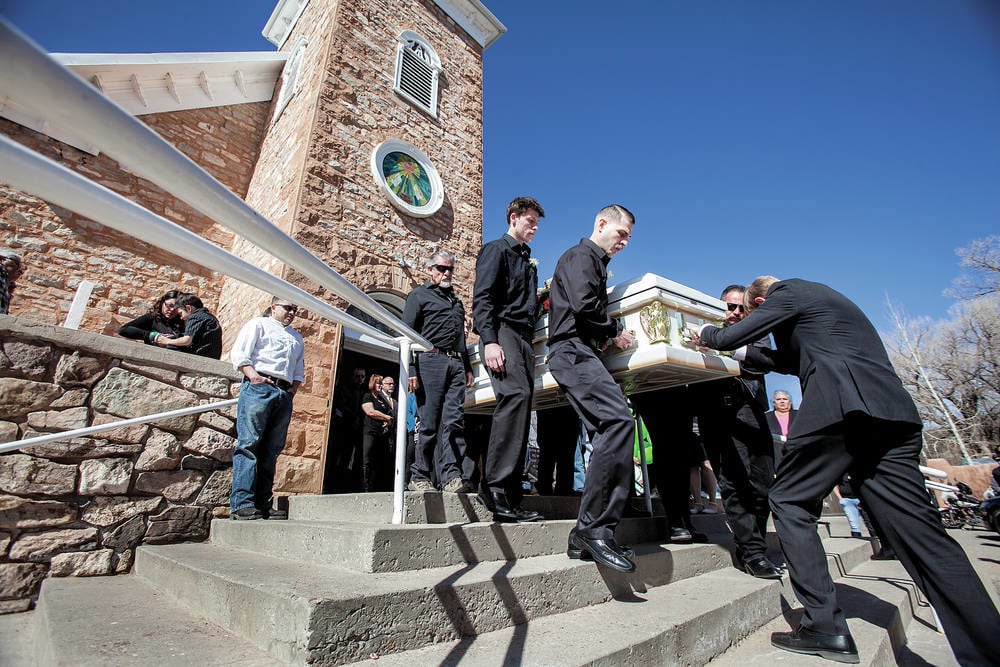 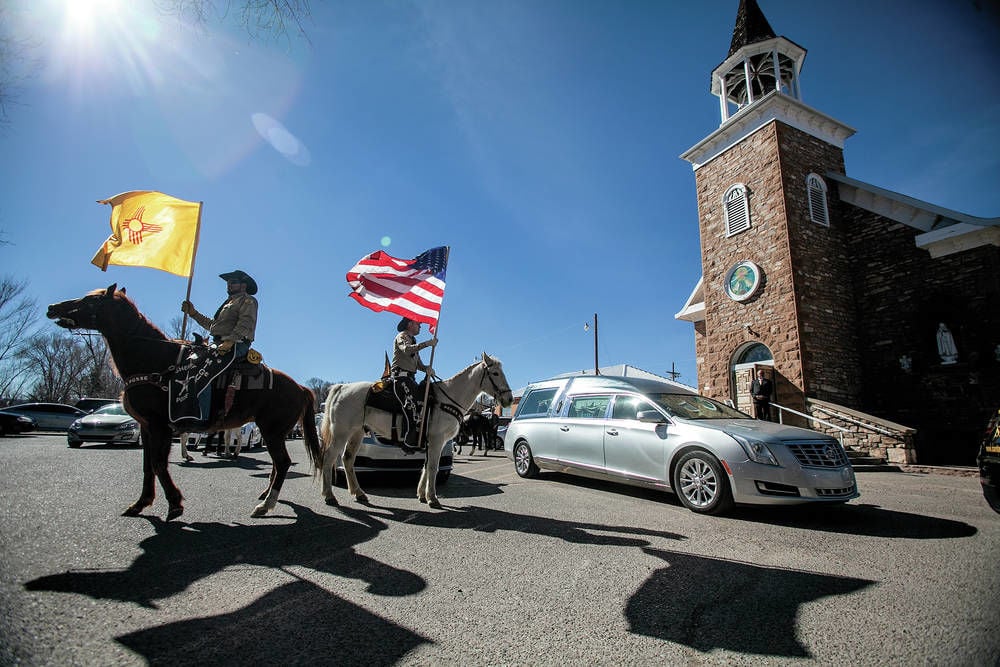 PECOS — Before they pushed a white casket studded with gold angels down the aisle of the St. Anthony of Padua Catholic church, Jeremiah Valencia’s family paused for some brief instructions.

A Rivera Family Funeral Home employee explained how the boy’s funeral Mass would proceed. Then he invited them to place their hands on the casket.

“Go ahead and leave your handprint on the casket, like Jeremiah left his handprint on all of your lives,” the funeral home employee told them.

They did. The priest blessed the casket, and the family walked with the child’s casket down the aisle.

Hundreds gathered Thursday, packing the pews and standing in the entryway of the small-town church to celebrate the life of 13-year-old Jeremiah, which authorities say was cut short at the hands of a violent, abusive man who had become his mother’s boyfriend.

At the front of the church, photos of the smiling boy, still with the round face of youth, beamed out from frames and collages of family photos. During a rosary before the Mass, his life flashed by in a slideshow.

Jeremiah on a bike. Jeremiah in a Batman shirt. Jeremiah with his arm around his younger sister, not even a year apart in age.

“He was an amazing little boy, with a heart of gold and a smile that could light up a room,” said one relative, who stood with other family members on the altar for a brief eulogy.

He liked being outdoors, the family said, particularly camping and fishing. He loved building things and often had tools in his hands. And he had a special bond with his sister, they said, and would always put her before anyone else.

“We love you Jeremiah, and this isn’t goodbye,” a tearful relative said from the altar. “We will see you again.”

Investigators say Jeremiah was beaten to death in a Nambé home where he was repeatedly abused at the hands of Thomas Wayne Ferguson, the 42-year-old boyfriend of his mother, Tracy Ann Peña. Records show both have been in and out of jail, and both now face criminal charges in connection with Jeremiah’s death. Santa Fe County sheriff’s deputies didn’t learn about the boy’s death until late January, two months after he died and was buried in a storage container. Jeremiah hadn’t been attending school, authorities have said, and was never reported missing.

Family, friends and acquaintances remember a kind kid who looked out for the good of others.

A woman named Anna, who declined to give her last name but said she is friends with the boy’s aunts, said she saw Jeremiah and his sister often while they were growing up. He was a precious little boy, she said, who would run around hollering like little boys do. He was always taking care of his sister, too, Anna said.

“When she would fall or something, he would run to her and pick her up right away, and ask, ‘Are you OK?’ ” she said. “That was his number one, his sister.”

Kabrina Quintana said that over the years, Jeremiah and his parents would stay with her at her house. The family would make pancakes, she said, and while other kids in the house would shout and yell that they wanted some, Jeremiah would stand back patiently, waiting until everyone else had their fill before asking for his own.

“He was so polite,” she remembers.

In an opinion piece that the staff of Carlos Gilbert Elementary School submitted to The New Mexican, they remember Jeremiah — who was a sixth-grader at the school in 2015-16 — as friendly, fun-loving and hardworking.

He wanted to be a professional basketball player, played the trumpet in the school band, and joked around with teachers and other students, the letter said. Teachers remember that he wasn’t afraid to ask for help, to admit when he was wrong or to stand up for his classmates.

“If any child would step up to stand with or protect others, it was Jeremiah,” one anonymous teacher is quoted as saying. “He was a kind and loyal friend to his classmates.”

Whether they knew the boy well or not, hundreds of mourners accompanied Jeremiah’s casket from the Pecos church to the St. Anthony’s Parish Cemetery down the street Thursday. Among those in the procession were members of the San Miguel County Sheriff’s Posse mounted on horseback, and patrol cars from the Santa Fe County Sheriff’s Office.

In front of the young man’s grave, the crowd blessed Jeremiah with hands outstretched. They released multicolored balloons, some with the letters “JV,” into the windy blue sky above the Pecos hills. They lowered the casket, covered with flowers, teddy bears and memorabilia, into the earth, and one man turned on his radio, playing a song by Charlie Puth and Wiz Khalifa.

“It’s been a long day without you, my friend,” the speakers played, “and I’ll tell you all about it when I see you again.”