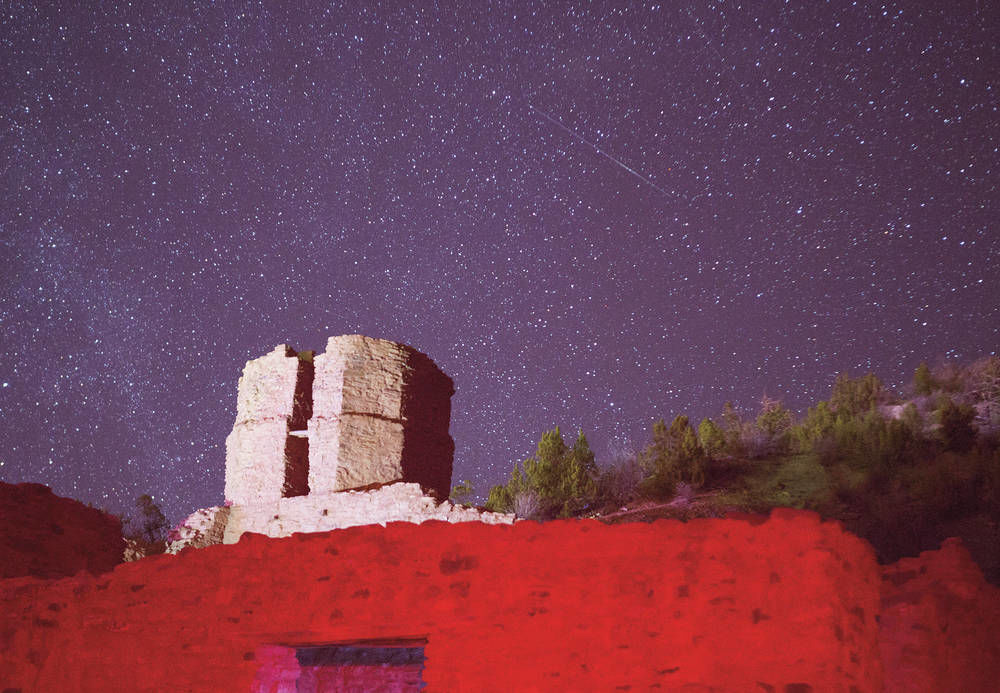 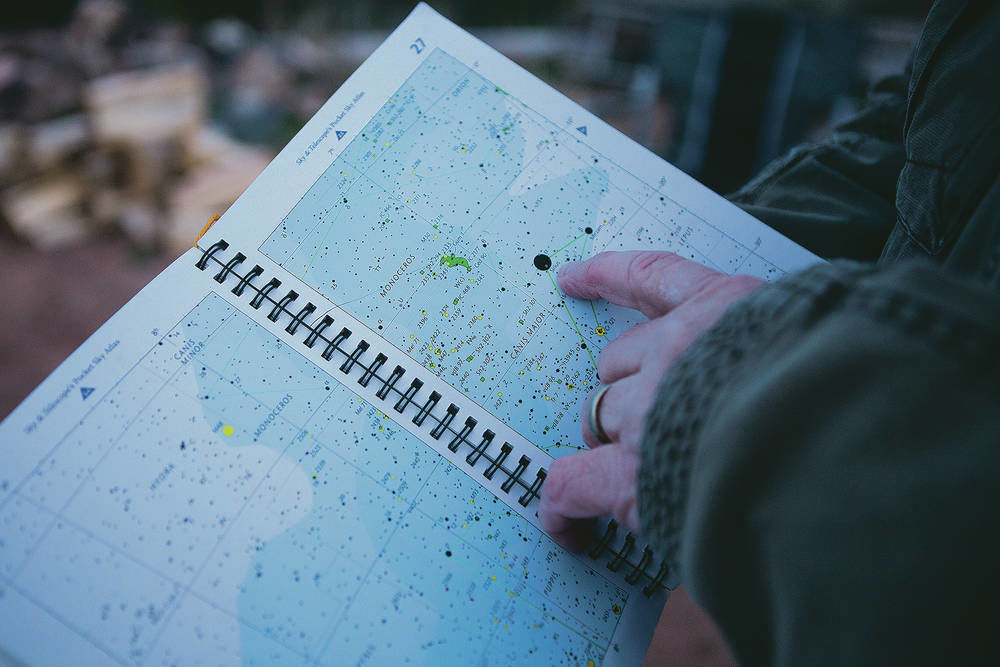 Darin Templet points to a star map during a "star party" in the Jemez Mountains on Saturday, March 30. Olivia Harlow/The New Mexican 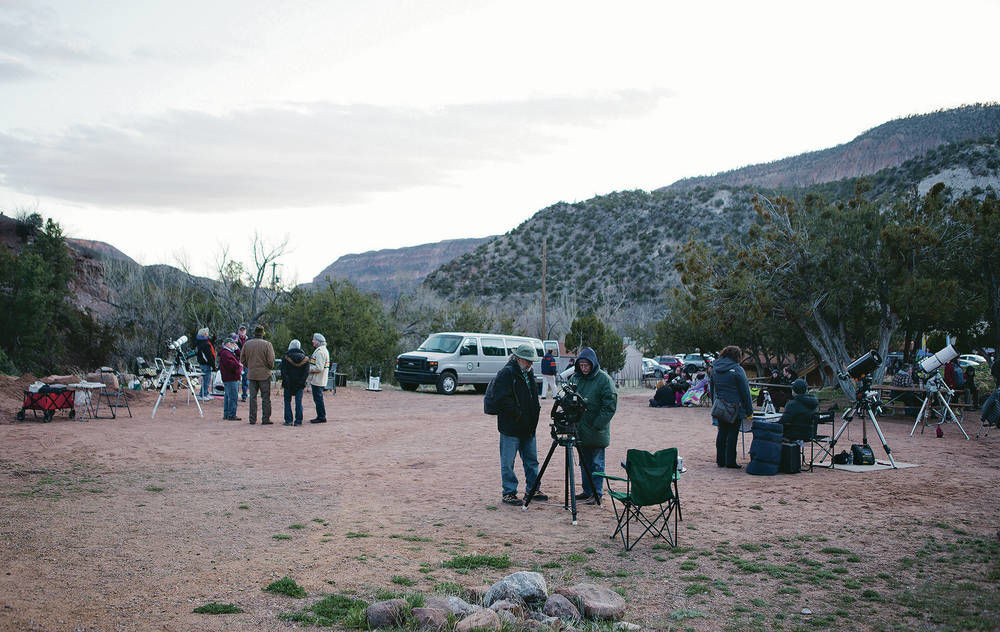 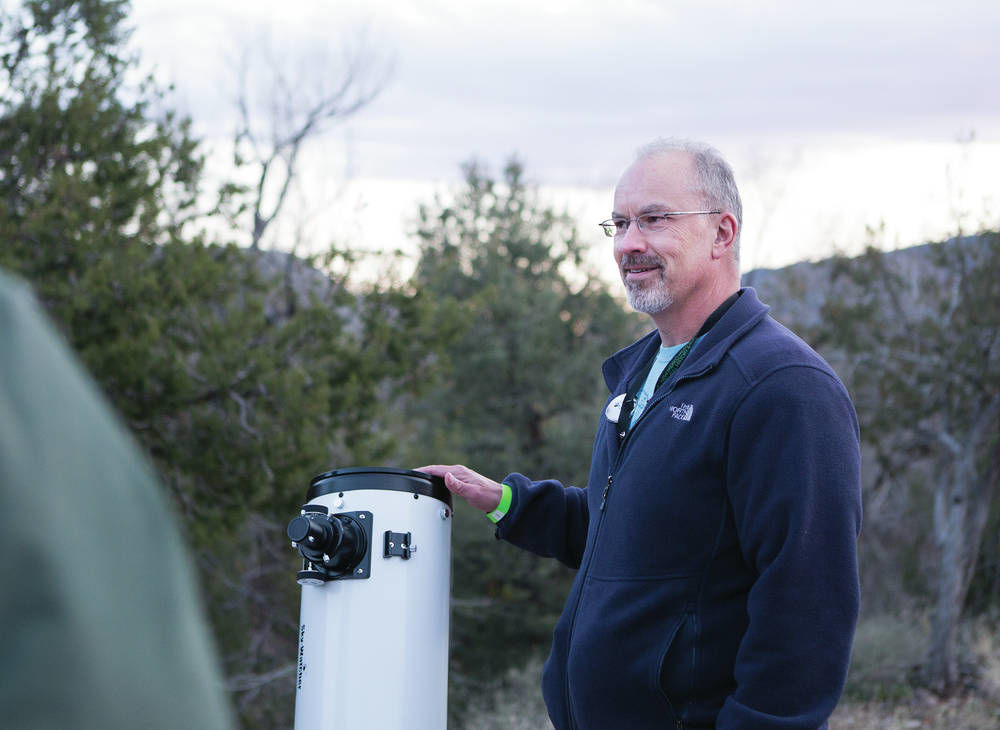 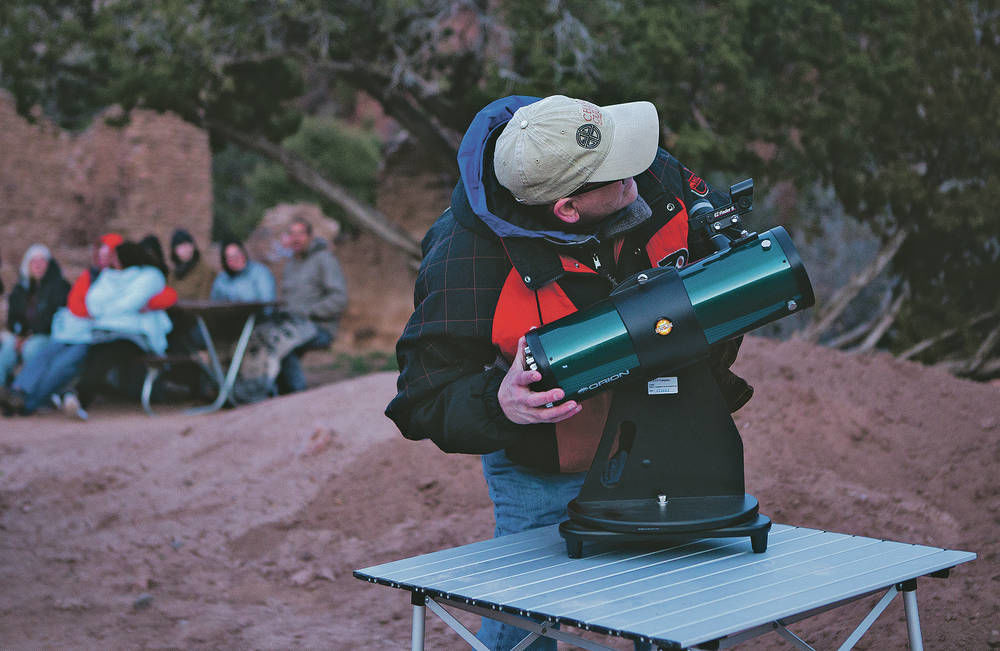 Jon Schuchardt locates stars in their telescopes at the latest "star party" in the Jemez Mountains on Saturday, March 30. Olivia Harlow/The New Mexican

Darin Templet points to a star map during a "star party" in the Jemez Mountains on Saturday, March 30. Olivia Harlow/The New Mexican

Jon Schuchardt locates stars in their telescopes at the latest "star party" in the Jemez Mountains on Saturday, March 30. Olivia Harlow/The New Mexican

JEMEZ SPRINGS — It was 7 p.m. when the sun began its descent behind the Jemez Mountains.

As the sky shifted from periwinkle to gray, hundreds of people spread out across the Jemez Historic Site to look at the stars through a variety of professional-grade telescopes.

First was Sirius, the brightest point in the galaxy, located more than 8.6 light-years — or 51.6 trillion miles — away from Earth.

Moments later, Orion’s Sword, Betelgeuse and the Big Dipper formed. And soon, it looked as if someone had dumped a bottle of glitter above the New Mexico landscape.

As the night grew darker and stars got brighter, astronomers used lasers to point to constellations, and participants at the historic site’s Star Party on March 30 shuffled from one scope to the next for a closer look.

“Wow, look mom,” one child said, peering through the eye of a telescope almost twice his size as his mother lifted him to the viewfinder. “This is so cool.”

More than 300 people gathered at the site on N.M. 4, high in the Jemez Mountains — home to archaeological remains of the 16th-century Giusewa Pueblo — for the third Star Party in the last year. Following a small event in April 2018 and a second in October that brought an estimated 700 visitors to the site, the village of Jemez Springs and the Jemez Historic Site have partnered with plans to host quarterly events where people can learn more about “the world beyond,” as many called it.

But many other locations in the state, such as the Jemez Historic Site, also are increasingly a draw for astrotourists — travelers in search of dark, clear night skies for stargazing.

Those at the recent gathering said the Jemez area, more than 60 miles from Albuquerque’s city lights and 70 miles from Santa Fe, is arguably among the best places in the state — maybe even the country — to see stars.

“I moved out here for clear night skies,” said Darin Templet, a self-taught astronomer who left the New Orleans area to pursue his astrological passion, which began decades ago when he was a boy of 14.

Looking closely at a star map, Templet oriented himself. There’s always something new to learn and to see, he said, glancing up at the sky. “There’s so much out there.”

Upon arrival, visitors were welcomed by Native American vendors selling homemade fry bread and Pueblo tacos. After a member of Jemez Pueblo gave a blessing in his Native Towa, people huddled in blankets and holding complimentary cups of hot cocoa formed lines behind telescopes.

The telescopes were pointed at various constellations, nebulas and star clusters.

“With the naked eye, it just looks like a smudge in the sky,” John Schuchardt, an astronomer from Rio Rancho, said of Pleiades, a star cluster composed of 45 stars in the Taurus constellation. “But with a telescope, it expands.”

As one astronomer pointed to constellations with a laser, he told audiences about Leo, Cassiopeia and Cancer the Crab. He passed out star maps with ample information about celestial objects, moon patterns and tips for observing stars.

“The funnest part is when someone sees something they’ve never seen before,” said Snider, adding he hoped people would gain an “appreciation of the absolute beauty of the night sky and the clockwork of the heavens.”

One participant, who said he’s been studying stars since he was a kid — his first Boy Scouts badge was for astronomy — agreed.

“I’m not an artist, but I like to look up to the sky, because that’s art,” said the man, who identified himself as Jim K. He emphasized there are more than 400 million stars in the Milky Way galaxy alone. “Last month, I was looking to the sky, and there were 20 galaxies right there in front of me. … There’s a lot of things out there.

“It’s interesting — not just for the science aspect,” he added, “but for the beauty of it.”

“It’s appreciating where we are,” he said, “and it’s a chance for us to share our community.”

The area’s first official Star Party, he said, was about a year ago behind the village bathhouse and was attended by about 20 locals. Following the event, organizers amped up marketing and planned the second Star Party in October.

This, Sweet said, boosted the local economy by bringing people to restaurants, galleries and hotels in the village.

“We were blown away,” he said.

Erica Asmus-Otero, the village’s public relations director, said there were more than 300 people at the March 30 event. She is working with employees of the historic site to schedule the next Star Party, which is likely to take place in June.

Given its proximity to Albuquerque and Santa Fe, as well as the village’s efforts to become “dark sky compliant,” Asmus-Otero said, she felt there was potential to boost tourism in Jemez Springs.

“It gives New Mexicans and regional visitors the chance to see Jemez Springs in a whole other light — no pun intended,” she said with a laugh.

For night sky enthusiasts, star parties are simply a chance to experience awe.

“You need something beautiful and inspiring,” Snider said.

“Astronomy puts things in perspective,” he added. “It’s the beauty of the heavens and the mysteries of it.”

The dark sky sites in the state include:

Capulin Volcano National Monument: The site, near Raton, hosts star parties from April through September at the base of the volcano. Learn more at nps.gov/cavo/index.htm.

Clayton Lake State Park: The state park has its own 14-inch telescope for night sky viewing. Stargazing events are hosted every month during the week of the new moon. Visit emnrd.state.nm.us/SPD/claytonlakestatepark.html for more information.

Chaco Culture National Historical Park: An observatory at Chaco is open to the public Tuesday, Friday and Saturday evenings. Lectures are held on the astronomical practices of the ancient Puebloans and how their observations informed their daily lives. Learn more at nps.gov/chcu/index.htm.

Cosmic Campground: This site, in the Gila National Forest, north of Alma, was the first designated International Dark Sky Sanctuary in the Northern Hemisphere. Visit fs.usda.gov/recarea/gila/recarea/?recid=82479.

A star party is a gathering of people to view the star-filled night sky through telescopes. The village of Jemez Springs and the Jemez Historic Site, 18160 N.M. 4, have joined to host quarterly star parties for people to learn more about constellations, clusters and nebulas. Admission is $5, with proceeds going toward renovations at the historic site. Hot cocoa is provided and Native American vendors sell homemade foods outside the entrance. Future events will include Native storytelling as it relates to astrology. The next Star Party is expected in June. Watch for announcements of upcoming events at jemezsprings.org and facebook.com/JemezSprings.