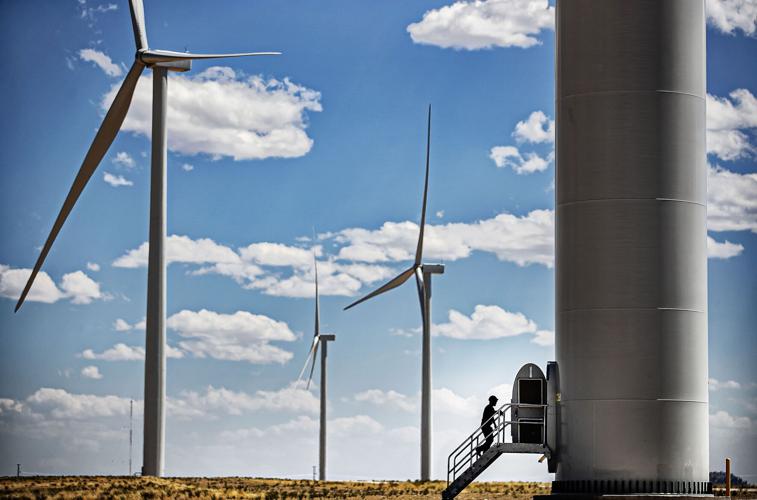 General Electric technician Francisco Mendoza repairs a brake disc on a wind turbine May 18 at the Duran Mesa Wind Farm. Pattern Energy is finalizing plans for another farm nearby, the Corona Wind Project, which will be one of the world's largest wind farms. 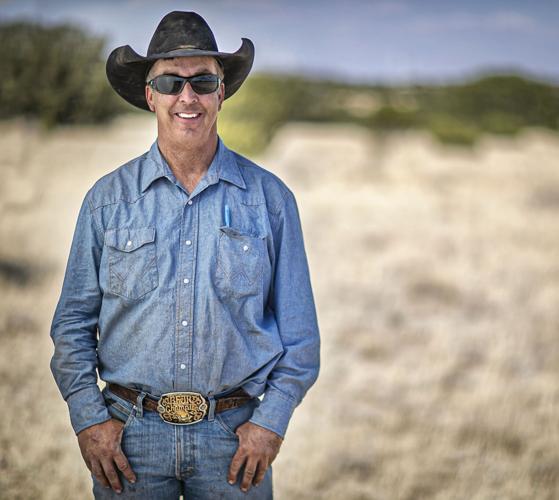 Dan Bell, a fifth-generation cattle rancher north of the town of Corona, says leasing property to Pattern Energy so it can erect wind turbines provides his family with income that is especially important during a drought. 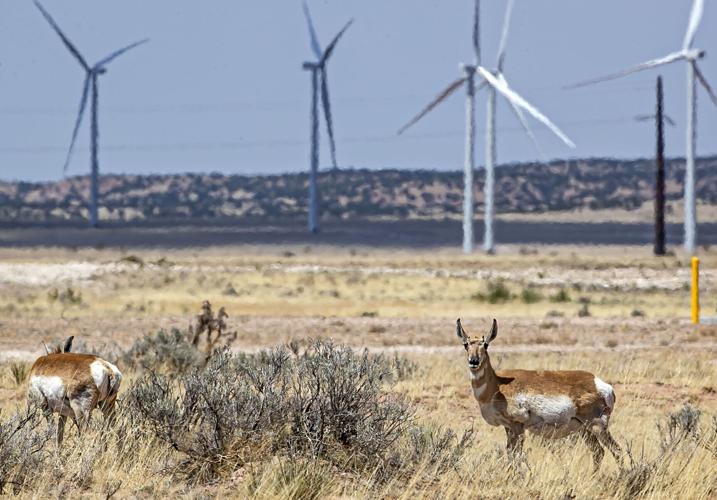 Antelope roam the grasslands around the turbines at the Duran Mesa Wind Farm. Pattern Energy is finalizing plans for another farm nearby, the Corona Wind Project, which will be one of the world’s largest wind farms.

One of the biggest wind-energy projects in the world is being whipped up in Central New Mexico, a giant stride for the state’s role in renewable energy.

Proponents say the potential for wind-aided power could generate a profound shift in New Mexico, allowing two things it possesses in abundance — endless gusts and huge stretches of empty land — to be widely used to create energy and make money.

The wind, an adversary during this tragic wildfire season in New Mexico, could be tamed and turned into a source of electricity for this state and others, proponents say. And with climate change a growing menace, renewable sources of energy such as wind and sun are in demand.

Dan Bell, a fifth-generation cattle rancher north of the town of Corona in Central New Mexico, said leasing property to Pattern Energy so it can erect wind turbines provides his family with income that is especially important during a drought.

“Most people are for them, but there’s obviously some people that don’t like a change in the landscape,” Bell said of the wind turbines that rise nearby. “We’re just glad to have the chance for some supplemental income that’s not directly from [agriculture].”

The change in the bountiful vistas around Corona troubles some in the area, who note the structures — which can range in height between 200 to 450 feet high — can be seen from great distances. Duane Frost , a cattle rancher near Claunch, west of Corona, said the turbines are visible from a hill on his land.

“I don’t like ’em,” he said. “They’re ugly, the lights blinking all night long. … You’re used to pristine country, and here are all these turbines in the middle of everywhere.”

Frost is chairman of the Central New Mexico Electric Cooperative, which he said derives little benefit from the wind projects.

Lincoln County Commissioner Todd Proctor, who lives in the small town of Capitan, said Friday he also has heard some complaints from ranchers about surveyors walking on private land and about turbines and transmission lines being “eyesores.”

But Proctor said overall, the technology is viewed positively in the area.

“I think it’s given some good funding that we never would have had,” he said.

The Pattern Energy projects provide revenue through taxes and land leases, said Stephen Fischmann of Las Cruces, one of five members of the Public Regulation Commission.

During a recent discussion of the projects in a PRC meeting, Fischmann called the projects “a momentous move forward” for energy in New Mexico.

Commission Chairman Joseph Maestas of Santa Fe said the projects will have “long-standing implications for the renewable energy industry here in the state.”

The first phase of the work, Western Spirit, is finished and can produce 1,050 megawatts of energy. The second, SunZia, will be in the same region as Western Spirit and will generate at least 3,000 megawatts, Pattern Energy says. Parts of one or both projects will be found in Lincoln, Torrance, Guadalupe and San Miguel counties.

The two projects combined will produce over 4,000 megawatts when at capacity — about twice the megawatts generated at peak load by Public Service Company of New Mexico.

Ali Bidram, an assistant professor of electrical and computer engineering at the University of New Mexico, said the state “has a lot of potential for wind power generation.”

The projects require many miles of transmission lines to move the energy.

A spokesman for the SunZia Southwest Transmission Project, of which the state Renewable Energy Transmission Authority is part owner, said the transmission line from Central New Mexico to southern Arizona has been in the works since 2006. The developers are updating the route, which requires federal review, he said.

There are effects of turbines and transmission lines, such as habitat alteration and bird collisions with the technology, he added.

“Can we reduce those or mitigate them to a point where we can accept those impacts?” Bird said. “On balance, I think yes.” The transmission lines generally run above ground, but technology such as ultraviolet lights is being developed to diminish bird collisions.

A Pattern Energy spokesman wrote in an email the Western Spirit project contains 377 wind turbines, or windmills. SunZia is expected to include 950 wind turbines.

Pattern Energy, privately owned by the Canadian Pension Plan Investment Board, stands to own one of the biggest wind energy projects in the world by the time SunZia is built, Medeiros said.

In a recent briefing with commissioners, Medeiros referred to the overall initiative as the Corona Wind Project. Pattern Energy, however, said this month the permitting side of the project was called Corona, but now the company refers to it as separate projects, Western Spirit and SunZia.

PNM announced late last year it had purchased the Western Spirit transmission line to distribute wind energy. The line is 155 miles and extends in a boxy “U” shape south from Bernalillo County through Valencia County, east into Torrance County and north to the border of Santa Fe and San Miguel counties.

Much of the energy carried through the transmission line will go to California. But PNM said New Mexico also would benefit, especially when backup energy is needed.

In a written statement, PNM spokesman Ray Sandoval said the company is “supportive of the expansion of renewables in New Mexico regardless of who’s building them. That is because these projects provide short-term jobs as well as also paying property taxes for the long term, which can help our counties, cities and state.

“New Mexico is uniquely positioned to not only supply all of our own electric needs but also supply western states with renewable energy,” he continued. “These projects illustrate the large potential that New Mexico has for renewable expansion and also shows the need for new transmission lines to unlock that potential.”

Shad Cox, superintendent of New Mexico State University’s Corona Range and Livestock Research Center, said he expects scientists and graduate students to work with Pattern Energy to restore the area of the SunZia project to its natural state, to the best of their ability.

The project comes with roads, equipment laydown areas and, of course, the wind turbines.

He said Pattern leases some land from the university for the Western Spirit project. The NMSU research center grazes cattle, goats and sheep in the area, he said, and the wind energy project didn’t require changing any grazing practices.

A daughter and son of his are recent Eastern New Mexico University graduates, he said, and they intend to be the sixth generation of the family on the ranch.

Dogs are our protectors, too