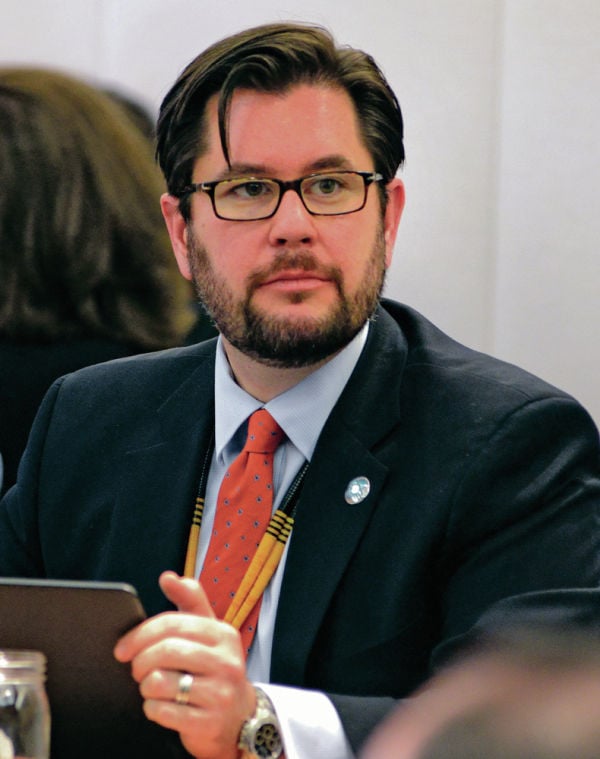 Brian Egolf, D-Santa Fe, listens to attorney Ousama M. Rasheed as the latter outlines the housing and legal costs the state would incur with the passage of House Bill 175, which would increase prison sentences for repeat DWI offenses. 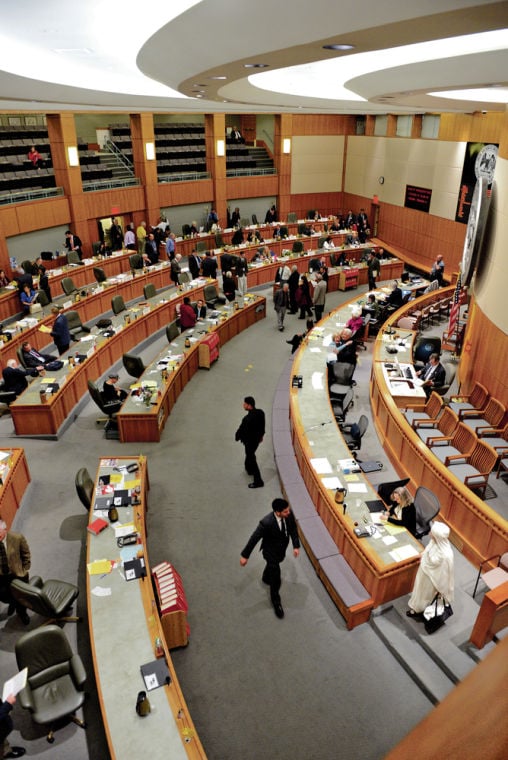 Brian Egolf, D-Santa Fe, listens to attorney Ousama M. Rasheed as the latter outlines the housing and legal costs the state would incur with the passage of House Bill 175, which would increase prison sentences for repeat DWI offenses.

Repeat drunken-driving offenders would face stiffer penalties under a bill that passed the House Judiciary Committee on Monday.

House Bill 175, which was approved by a 9-7 vote, would increase prison sentences for fourth and subsequent DWI offenses and make eight or more offenses a second-degree felony.

The bill is one of several DWI bills pending in the Legislature.

House Bill 10 would increase the requirements for removal of an ignition interlock device before reinstatement of a driver’s license and require home Breathalyzer devices for an offender under house arrest. It passed the House last year but never reached the Senate floor.

HB 175 would not change the penalties for conviction on a first, second or third DWI. But a person convicted of a fourth DWI, a fourth-degree felony, would face 30 months in prison, up from 18 months. And 18 months of that could not be suspended or deferred.

The penalties increase with each subsequent offense. An eighth conviction is a second degree felony and the offender would receive a 12-year prison sentence, of which 10 years cannot be suspended or deferred.

A similar measure sponsored by Rep. Tim Lewis, R-Rio Rancho, died in the House Consumer and Public Affairs Committee in 2013.

Repeat offenders make news. Robert Ortiz, 51, was arrested in December on what police said was his 11th time driving drunk. John P. Chavez was arrested on his 11th DWI charge in 2010 after an eight-year sentence for running over a Colorado couple in 2003.

In 2011, people with two or more convictions, represented 39 percent of the drivers convicted of DWI in Santa Fe County. Of the 668 convictions, 259 people were found guilty of a second or subsequent offense. That included 20 convicted of four DWIs and one with 12.

“It does not seem like anybody looked at the financial side of this,” he said. “I don’t see how good conscious you can support this bill.”

According to the fiscal impact report for Lewis’s 2013 bill, the measure could have cost the state up to $2.6 million per year.

Rep. Eliseo Lee Alcon, D-Cibola, said he wanted to know why more wasn’t being done to help offenders at the first, second or third offense rather than increasing prison terms for those with four or more convictions.

“I hear these bills over and over again,” Alcon said. “Help me take care of the problem in the beginning, and I will help you lock up the ones who don’t make it.”

As a rebuttal to the concerns presented, former police officer Rep. Paul Pacheco, R-Albuquerque, said that the families of those who die as a result of DWI crashes don’t care about finances.

“What do we say to the victim?” Pacheco asked. “All they know is that their family member has been ripped away from them.”

I've always said a 1st time conviction could be death by hanging but with our asleep at the wheel DA's office and Judges like David Segura, Sandra Miera, George Anaya Jr. Buzzy Padilla, Bill Dimas (previously) and those at the 1st Judicial Dist. court what does it matter what the penalty is? A plea will be offered, a case dismissed, a finger will be wagged, a sentence suspended, and voila', another drunk free to terrorize our citizens.
BUT we can hope that stiffer "mandatory" sentences are around the corner. Apparently the our Judges need some assistance with public safety.
I do wish reporter, Mr. Quintana listed the 7 Reps on the Judiciary committee that voted against HB 175.

It is time to make the Drunk Drivers pay for their crimes. If they can afford to got out and drink, then they should have the money to pay for their incarceration. Bring back the chain gangs and make them work on the road ways, Have more of them out doors picking up trash and get them doing something productive. Maybe if their relatives and friends see them, they may think twice about drinking and driving. If this doesn't stop them then make the penalties very harsh. First time offender 90 days in jail period. No getting out, no pleading for a suspended sentence. Sometimes the hard way is the only way to reach people and get them to wake up.

I think a greater concern would be the plea barganing with DWI cases. If this law is passed, the DA's office will only plead more cases down to a lower offense DWI. Too many times, a person arrested for a multiple DWI offense (like the 5th), is plead down to a second or thrid DWI for the second or third time. I think, since this is the common practice, it would make more sense to stiffen penalties for lower level DWI cases, so the perpetrator isn't given so many chances to continue this behavior and possibly kill someone.

"But Ousama Rasheed, past president the New Mexico Criminal Defense Lawyers Association, cited financial concerns associated with holding drunken drivers in prison for longer periods."
Leave it to a lawyer to argue against locking up repeat offenders. What does doing nothing cost? And what about the emotional costs to survivors of drunk drivers. Drunk driving is volitional not accidental. A person chooses to drive drunk and they know it is not only illegal but dangerous - in fact, they choose to endanger themselves and others. Wake up Mr. Rasheed.