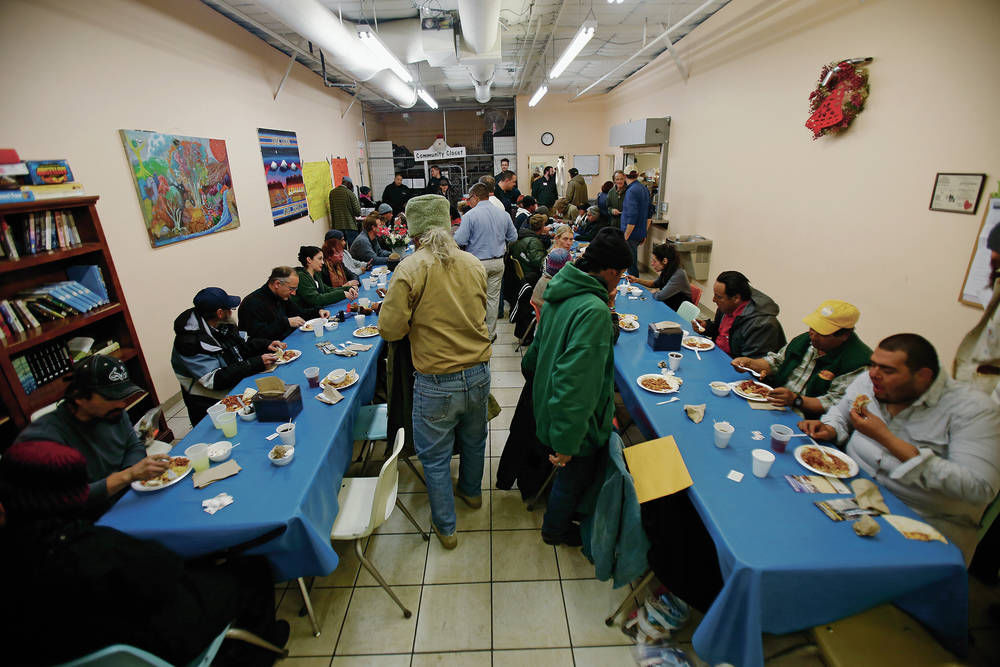 Residents of the Interfaith Community Shelter dine Thursday at Pete’s Place. The homeless shelter has seen a huge surge in the number of people they’ve been housing overnight in the past few months. Luis Sánchez Saturno/The New Mexican 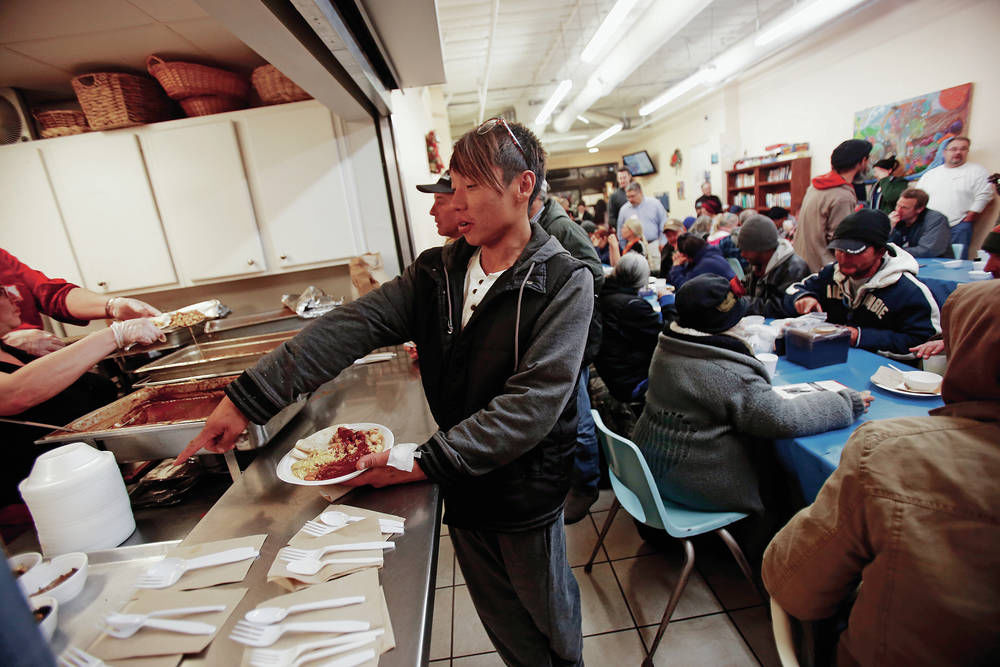 Sam Bird, a resident of the Interfaith Community Shelter at Pete’s Place, gets his dinner Thursday. The homeless shelter has seen a huge surge in the number of people it has been housing overnight in the past few months. Luis Sánchez Saturno/The New Mexican 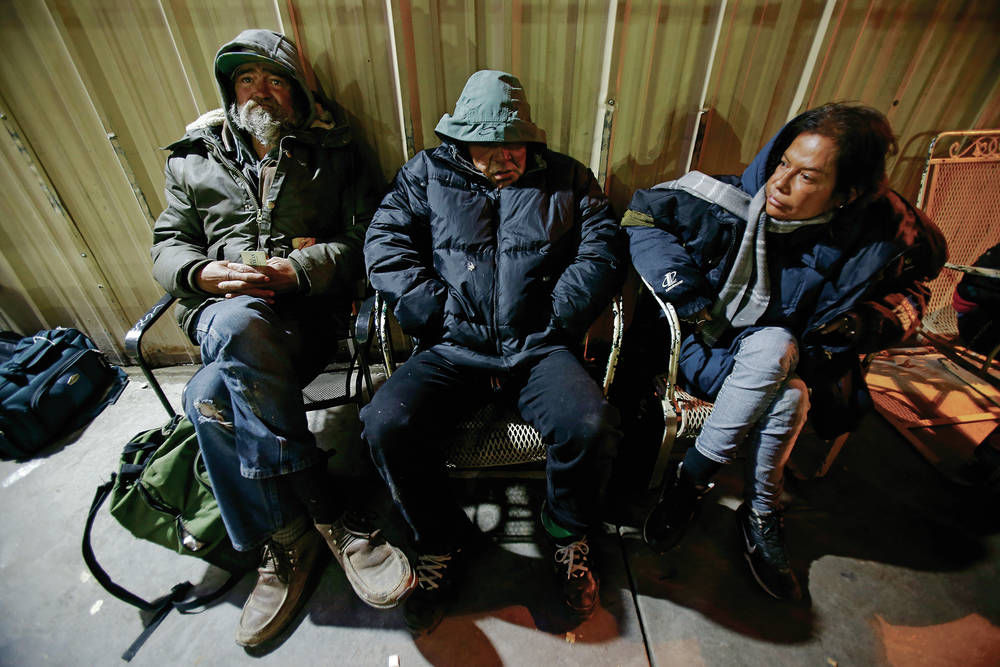 Steven Eastman, left, Randy Trujillo, center, and Loretta Lucero wait to get into the Interfaith Community Shelter at Pete’s Place on Thursday. The homeless shelter has seen a huge surge in the number of people it has been housing overnight in the past few months. Luis Sánchez Saturno/The New Mexican

Residents of the Interfaith Community Shelter dine Thursday at Pete’s Place. The homeless shelter has seen a huge surge in the number of people they’ve been housing overnight in the past few months. Luis Sánchez Saturno/The New Mexican

Sam Bird, a resident of the Interfaith Community Shelter at Pete’s Place, gets his dinner Thursday. The homeless shelter has seen a huge surge in the number of people it has been housing overnight in the past few months. Luis Sánchez Saturno/The New Mexican

Steven Eastman, left, Randy Trujillo, center, and Loretta Lucero wait to get into the Interfaith Community Shelter at Pete’s Place on Thursday. The homeless shelter has seen a huge surge in the number of people it has been housing overnight in the past few months. Luis Sánchez Saturno/The New Mexican

The common area of the Interfaith Community Shelter at Pete’s Place was bustling on a recent night as volunteers laid out plates of rice and beans, enchiladas and posole for dinner guests.

Sitting together at dinner tables were both young people and old, able-bodied and disabled. People of all races and backgrounds mingled in a crowd that has become one of the most eclectic melting pots in Santa Fe. And the crowd is growing, shelter officials and guests say.

“It’s really packed,” said Nancy Freeman, who has stayed there, on and off, for three years. “It’s packed to the point of almost being uncomfortable.”

Most years, the winter shelter has averaged 60-plus overnight guests each night in November and December. But for the past few months, the number of people spending the night has been far higher than shelter manager Joe Jordan-Berenis has come to expect in his almost four years at the facility — with about 100 nightly guests. The capacity at Pete’s Place is 123 people — which means there are only a couple of dozen beds to spare for additional guests who tend to arrive in January and February, when temperatures usually drop to the lowest of the season.

Roughly 40 percent of the shelter’s guests this winter are new to the facility, according to Jordan-Berenis. And most of those new folks have told shelter staff that they are from Santa Fe County.

“I think the numbers tell a story,” Jordan-Berenis said, “and I’m really trying to figure out why we’re seeing this increase. … I don’t have an answer for that right now.”

The new guests, about 250 in all, have various stories to tell about why they landed at the shelter. Some say they are fleeing domestic violence, while others are struggling with drug abuse, can’t afford housing or had a bad turn of luck.

Dan, for example, slept at the shelter for the first time Thursday night. A veteran who has lived in Santa Fe for several years, he asked that his last name not be published because he is looking for employment and doesn’t want his housing situation to jeopardize his job search.

For the last three years, Dan said, he had stable work at a car dealership. But he lost the position in September, and his unemployment checks weren’t enough to cover the $900-a-month rent at his casita.

He had a temporary roommate, he said, but after the two had a falling out, he resorted to living in his car. Dan went to Pete’s Place when he felt he had nowhere else to turn. The shelter helped him connect with veterans services and gave him a warm place to sleep until he gets back on his feet.

“My life has totally turned topsy-turvy,” he said. “I’m without a place for Christmas.”

Whether the Interfaith Shelter’s growing numbers are indicative of a larger rise in homelessness on the streets of Santa Fe and across the county is difficult to tell. It could be that guests who usually cause a spike in attendance around January or February are just showing up earlier, Jordan-Berenis said.

If the numbers do, indeed, point to rising homelessness in the county, the reason for that is also elusive.

The current number of homeless New Mexicans is not yet available. The New Mexico Coalition to End Homelessness generates rough counts of the state’s homeless population each January — meaning 2017 data are now almost a year old.

The January 2017 report showed a slight increase in the statewide homeless population from the previous year — up to 2,482 from 2,263 in January 2016. That was the first increase since 2011, but still the second-lowest count in the last 10 years.

Hank Hughes, executive director of the coalition, says it will take more than a year to determine whether the statewide increase was a blip or if the state is seeing an upward trend.

The number of homeless people in the Santa Fe area was actually down earlier this year, according to the January count, which logged 193 people, Hughes said. In years past, that number has been up around 300 or higher — which leads Hughes to believe that the steep drop was probably a “fluke of the data.”

Other organizations say the coalition’s annual count doesn’t include all the people in the area who are struggling with housing needs or at risk of becoming homeless, a far higher number of residents. Adelante, for instance, an organization that provides services for homeless children and youth in the Santa Fe Public Schools, says it helps support some 1,200 homeless kids in the district.

Hughes is not sure what to make of the Interfaith Shelter’s growing crowd.

“It’s possible that what [the shelter] is seeing is the beginning of an increase, and that’s the first sign, but we won’t know,” Hughes said. “We’re doing another point-in-time count at the beginning of January, and then we’ll see.”

Homelessness across the U.S. increased this year for the first time since 2010. The West Coast, in particular, has seen a surge in homelessness, driven largely by high housing costs — an issue that also has raised concerns in Santa Fe, where low-cost housing has become increasingly difficult to find.

Not all shelters in Santa Fe have seen an increase in guests. Edward Archuleta, a case manager at the St. Elizabeth Shelter for men, said the 28-bed facility actually had a few beds open each night in November. As of mid-December, he said, it was again at capacity.

But Santa Fe police say they have seen a shift in the homeless population.

“I think we are, for whatever reason, noticing a little bit more,” Capt. Adam Gallegos said.

Officers in the city police department usually establish a rapport with people on the streets whom they encounter on a regular basis, Gallegos said. Recently, he said, officers have told him they’re seeing many new faces, requiring them to start the process over from scratch.

Gallegos wasn’t certain where the new people were from. But when he was told about Jordan-Berenis’ concerns that more local people might be out on the streets, Gallegos said he would ask officers to try to find out whether those they encounter are people from the area who have lost their homes.

“That’s concerning,” he said. “That, to me, sheds light on a bigger issue — Why? … At some point, we will have to figure that out.”

The demand for both for meals, beds and services at the Interfaith Shelter at Pete’s Place has been so high that the shelter ran through almost half of its food budget by the end of October — only four months into the fiscal year. After Jordan-Berenis explained the heightened need to a few faith groups in the city, he said, they offered additional donations.

“I’m kind of hoping that people are showing up earlier because they know about this place, they’re feeling comfortable and it’s available,” he said.

Meagan, one of the shelter’s new clients, who asked that only her first name be used, said she has been without a home for a few years and had never stayed in a homeless shelter before she found Pete’s Place two months ago.

Most of her time on the streets was spent in Albuquerque, she said, where she was afraid to stay at a shelter because of the “horror stories” friends had told her about being assaulted or robbed in such places.

After she came to Santa Fe, seeking help to turn her life around and kick a drug addiction, Meagan again found herself on the streets, sleeping in the Railyard Park. She was skeptical when someone first suggested she go to the Interfaith Shelter. Now, she’s glad she did.

She likes the food and the people, Meagan said. She also appreciates that the shelter’s staff members seem to genuinely care about her and are cheering her on as she works toward rehabilitation.

“It’s kind of a place where we are exactly who we are. Nobody judges us,” Meagan said. “It’s like loving chaos.”

That feeling is particularly important when it gets difficult for Meagan care about herself, she said. “Why would I care about myself when nobody else cares about me?”