State Rep. Melanie Stansbury speaks at a news conference in April. Stansbury, a Democrat, is considered the favorite in Tuesday's special congressional election. 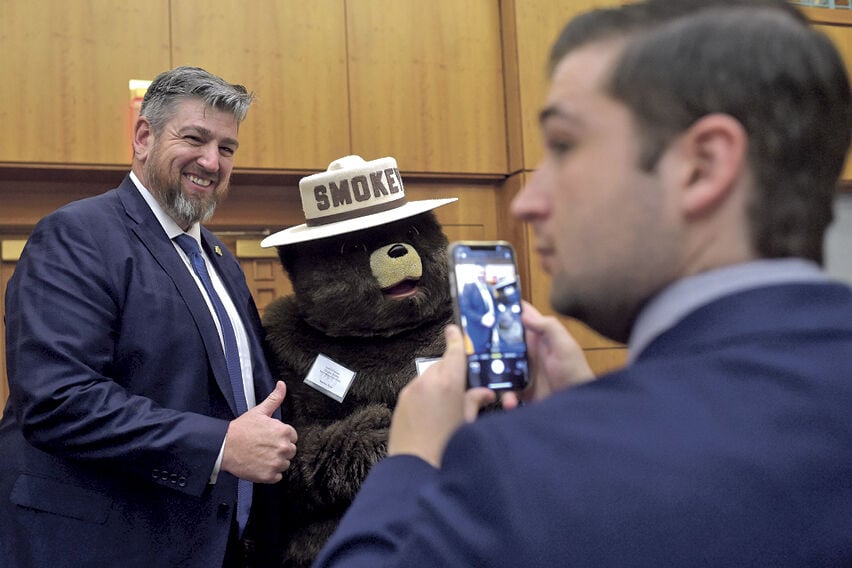 State Sen. Mark Moores poses for a photo with Smokey Bear during the 2020 legislative session. Moores has called his opponent in the special election 'far left' and 'radical' — including in a Friday appearance on Fox News.

State Rep. Melanie Stansbury speaks at a news conference in April. Stansbury, a Democrat, is considered the favorite in Tuesday's special congressional election.

State Sen. Mark Moores poses for a photo with Smokey Bear during the 2020 legislative session. Moores has called his opponent in the special election 'far left' and 'radical' — including in a Friday appearance on Fox News.

New Mexico will have a new member of Congress after Tuesday, when voters in the Albuquerque-based 1st Congressional District will choose a replacement for Deb Haaland, who vacated the seat to become secretary of the interior under President Joe Biden.

State Rep. Melanie Stansbury, a Democrat, is considered the favorite in the special congressional election.

It’s a high-stakes race with control of the U.S. House of Representatives on the line.

“When we flip this seat, [House Speaker Nancy Pelosi] only has a two-vote margin,” the Republican candidate, state Sen. Mark Moores, told a crowd at the Republican Party of New Mexico’s state convention in Texas last month before driving back to Albuquerque to campaign. “We need to save this country, and that’s what this is about.”

Moores, who is considered Stansbury’s biggest rival, has launched an aggressive campaign that portrays Stansbury as a “radical progressive” who has expressed support for a proposal that calls for, among other things, closing federal detention facilities within 10 years.

Though a formidable candidate, Moores, a three-term senator and businessman who played football for the University of New Mexico, faces an uphill battle in winning the race.

While the district was once a Republican stronghold, Democrats now make up 47 percent of registered voters compared to 28 percent Republican. A Republican held the seat for 40 years, but the seat shifted to and has remained in Democratic control since 2009. The district includes most of Bernalillo County, all of Torrance County and parts of Sandoval, Santa Fe and Valencia counties.

In early voting, which ended Saturday, Democrats were outperforming Republicans.

As of Friday morning, 77,253 ballots had been cast, including 45,354 from registered Democrats and 22,457 from registered Republicans, according to the Secretary of State’s Office.

Moores did not return a message seeking comment. But he told Fox News on Friday it was “such a critical race because the Democrats have gone so far left.” He continued to label Stansbury a “radical” candidate “who would fit right into the AOC wing of the party.” He was referring to outspoken Democratic U.S. Rep. Alexandria Ocasio-Cortez of New York.

“She actually called for the passage of something called the BREATHE Act in Washington, D.C.,” he told the conservative network, referring to a police reform proposal that would “divest federal resources from incarceration and policing.”

Stansbury, who is on video declaring that “we need to pass the BREATHE Act in Congress,” has been somewhat vague since she made the statement.

Politico reported that Stansbury “has largely avoided discussing the BREATHE Act since she voiced support for it in a tweet and at an April forum hosted by the New Mexico Black Voters Collaborative.”

In an interview with The New Mexican on Sunday, Stansbury said she supported the George Floyd Justice in Policing Act and other criminal justice reform measures but was careful not to mention the BREATHE Act.

“[Last week was] the one-year anniversary of the George Floyd murder, and we still haven’t passed federal legislation to address the systemic racism that affects the safety and well-being of people in our community,” she said. “We have to pass federal legislation, we need to pass the George Floyd Justice in Policing Act, we need to end qualified immunity at the federal level and we need to be bringing federal resources home to New Mexico to invest in health, economic development and in the well-being of our communities.”

Despite lingering questions about her support of the proposal, which grew out of the Black Lives Matter movement, Stansbury has been busy campaigning. On Thursday, she was joined on the campaign trail by Doug Emhoff, the husband of Vice President Kamala Harris. Emhoff’s appearance followed Biden’s endorsement of Stansbury.

Polling locations will be open from 7 a.m. until 7 p.m. Tuesday.

Other candidates in the race are Libertarian Chris Manning and Aubrey Dunn, a former Republican and state land commissioner who is running as an independent. Two write-in candidates also have been certified.

It's a long shot for sure but just maybe enough independents and dems have evaluated the last 4 months and decided there are better options than open borders, defunding the police, gas and grocery prices rising quickly, free everything for everyone, violent crime on the rise everywhere, drugs pouring across the border, pipelines for Russia but not the U.S., schools closed, turnstile justice making the streets more dangerous, critical race theory being taught the kiddos, government benefits more advantageous than going to work, kids in cages, inflation and on and on. And that's after only 4 months!

I notice you didn't dispute anything I said.

Regardless of who wins, NM will have yet another lightweight, incompetent political hack representing us in DC. The last 15-20 years have cemented NM's last place finish in most all things, especially the politicians who run this state.

Moores (and every other GOP candidate) can yell “Radical Socialist” all they want since they have no plan for health care, the environment, COVID relief, or any other major issue facing America today. What does the GOP have plenty of? Laws for voter suppression.