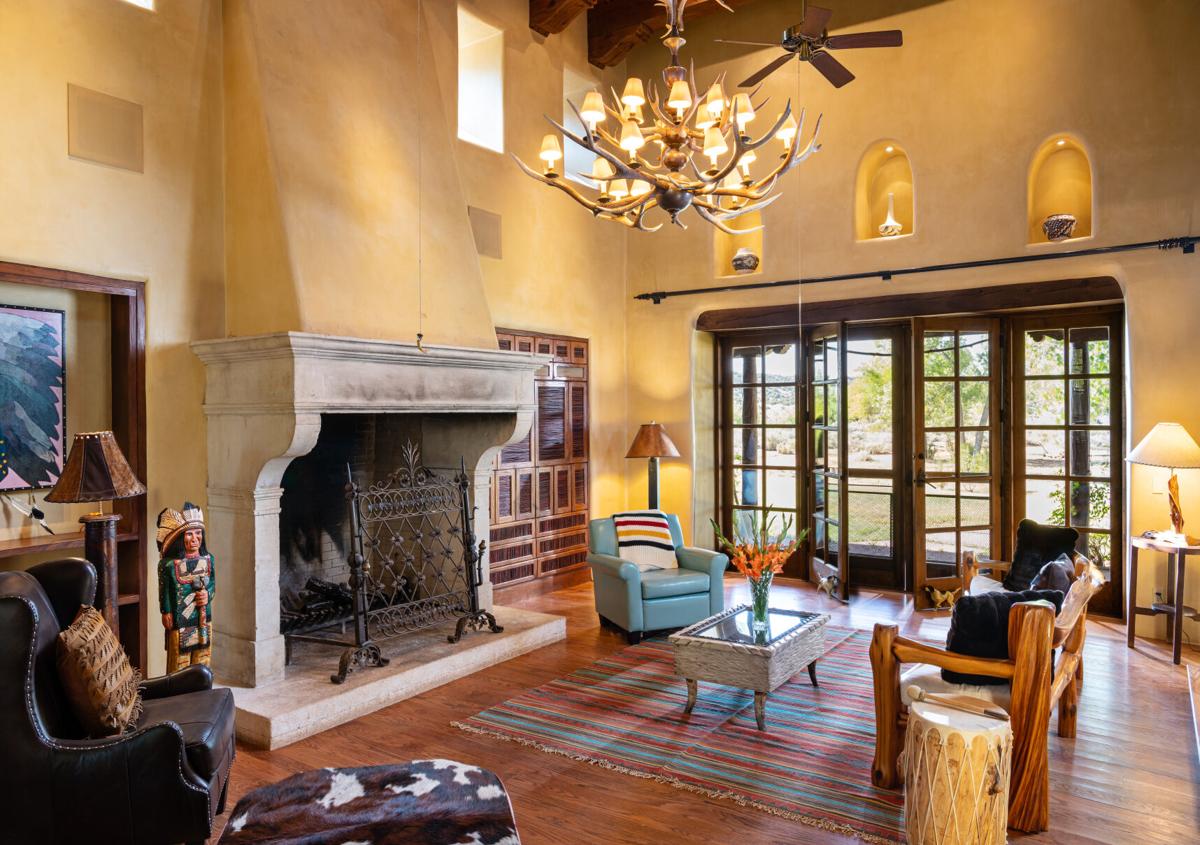 Saddleback Ranch has two large homes. This is the living room in the larger home, the six-bedroom, 7,264-square-foot Drogheda Estate. 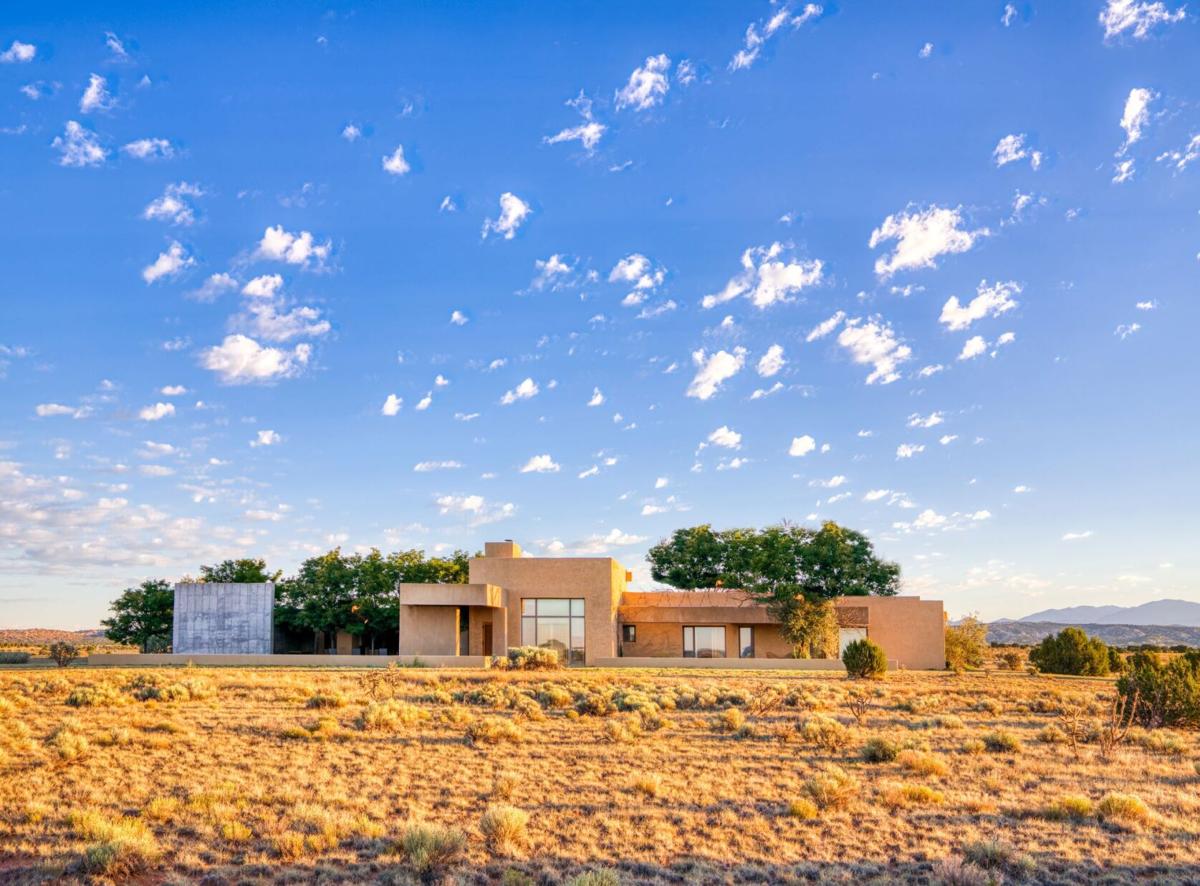 Windland Estate is a four-bedroom, 6,100-square-foot home at Saddleback Ranch where Houston owner Dan Silvestri stayed on his infrequent visits to Santa Fe.

Saddleback Ranch has two large homes. This is the living room in the larger home, the six-bedroom, 7,264-square-foot Drogheda Estate.

Windland Estate is a four-bedroom, 6,100-square-foot home at Saddleback Ranch where Houston owner Dan Silvestri stayed on his infrequent visits to Santa Fe.

The last time Saddleback Ranch in Galisteo was sold, it went for the highest price ever recorded in Santa Fe County this century.

It was a high-water mark that still stands — $7.35 million clear of the second-highest property sale in the past 20 years.

But then, consider the amenities. The 3,250-acre ranch comes with a six-bedroom, 7,264-square-foot Drogheda Estate and four-bedroom, 6,103-square-foot Windland Estate. The property also has an eight-car garage and 10-stall barn.

It goes on the auction block Wednesday without reserve, meaning no minimum bid. The auction will be conducted by Miami-based Platinum Luxury Auctions, which has conducted several high-dollar home auctions in Santa Fe.

Houston-based shopping center magnate Dan Silvestri and other partners bought the ranch in 2008 and Silvestri became full owner 1½ years ago. He lived in the smaller Windland Estate, but Silvestri reckons he has visited maybe 20 times over the years.

Silvestri is the owner and president of Silvestri Investments, a real estate investment company that possesses some 65 shopping centers in the Houston and Orlando, Fla., areas.

Silvestri went straight to auction with the property rather than listing it.

“It’s a lot faster to do it this way,” he said. “Some of the high-price properties take a long time to sell.”

Trayor Lesnock, founder and president of Platinum Luxury Auctions, does not yet have an estimate of how high the auction price might go. Real estate prices in Santa Fe and across the country are at record highs even with COVID-19 pandemic restrictions and uncertainty.

“Exceptional properties located in desirable markets are still performing exceptionally well, despite the pandemic,” Lesnock wrote in an email.

Silvestri is philosophical about how much the auction will bring.

“I would love to get that back,” Silvestri said of the $17.45 million purchase price. “Hopefully, we get the fair market value. If it’s less, it’s less. If it’s more, great.”

The auction will be in person at Saddleback Ranch starting at 4 p.m. Wednesday; bidders can also bid and tour the property remotely. Bidders must register by 5 p.m. Tuesday and must submit a refundable deposit of $300,000 if bidding on the entire property or $100,000 per parcel on the four parcels that make up the ranch.

Saddleback Ranch was built in 1992 by art collector and philanthropist Emily Fisher Landau and her son, real estate developer Richard Fisher, who died in 2006.

“It’s not a lot different,” Silvestri said about the ranch today. “The Fishers did a phenomenal job. They really didn’t need any updates.”

The Fishers built the two main residences — the Drogheda and Windland estates.

The six Drogheda bedrooms all have en suite bathrooms and kiva fireplaces. The kitchen also has a kiva fireplace. The so-called grand salon features a two-story ceiling and stone fireplace from France. A koi pond, kitchen and outdoor fireplace are in the central courtyard.

The Windland home comes with a built-in casita with a separate entrance. The living room of the main house includes built-in, illuminated display galleries, a fireplace and panoramic sunset views. Outdoors, the home has an elongated pool and spa plus a grass courtyard with covered lounge area.

Saddleback also has a 3,850-square-foot adobe-style ranch center with a 10-stall barn and a living area with an entertainment salon.

There is a third home called Chamisa, a three-bedroom, three-bath 2,800-square-foot adobe structure with interior courtyard.

• Personal protective equipment and social-distancing measures will be in place at the auction of Saddleback Ranch. To sign up, contact Platinum project manager Walter Cerini at 800-974-3683 or wcerini@platinumluxuryauctions.com.

Saddleback is still the highest-priced home sale in Santa Fe County in the 21st century. The property, with two luxury homes, last sold in 2008 for $17.45 million, according to the Santa Fe Association of Realtors.

And so the rich get richer. While we're at it, let's address the income disparities in our city, which increase by the day as out-of-staters flock to snap up our real estate. The average home price in SFe is now 500K. Go America.