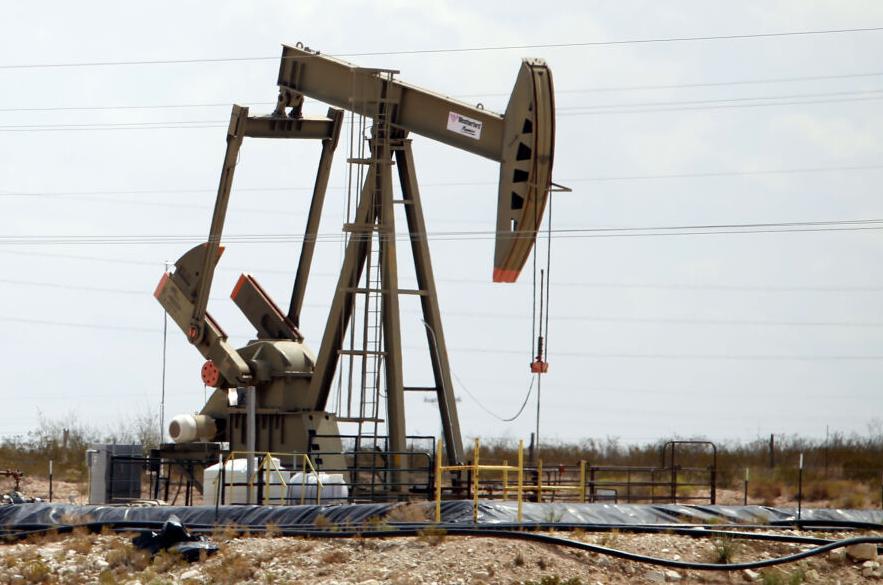 A pump jack in Carlsbad in September 2019. State Rep. Javier Martínez, chairman of the House Taxation and Revenue Committee, says that ‘the elephant in the room has always been how’ the state would replace the huge percent of revenue generated by the oil and natural gas industry. 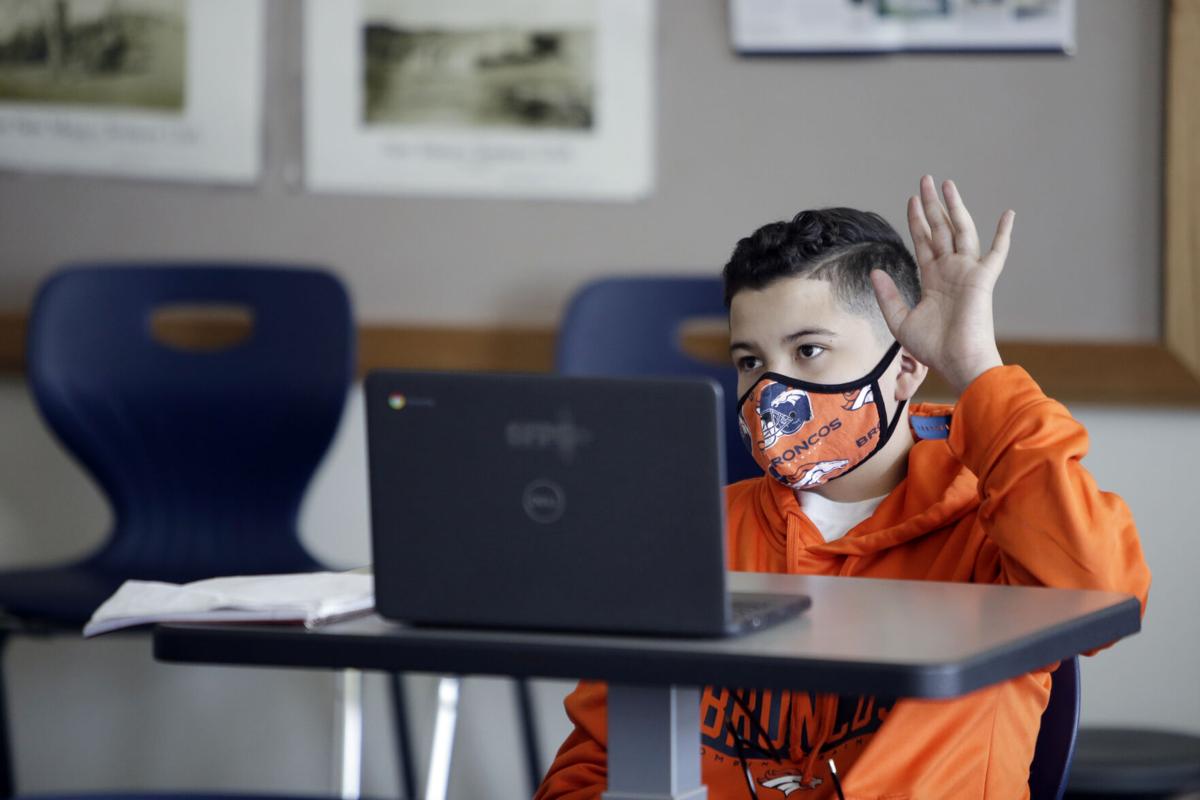 A Milagro Middle School student raises his hand during class last month. Public education funding in New Mexico has long been heavily reliant on energy revenue, but U.S. Sen. Martin Heinrich looks to change that with the Schools and State Budgets Certainty Act. 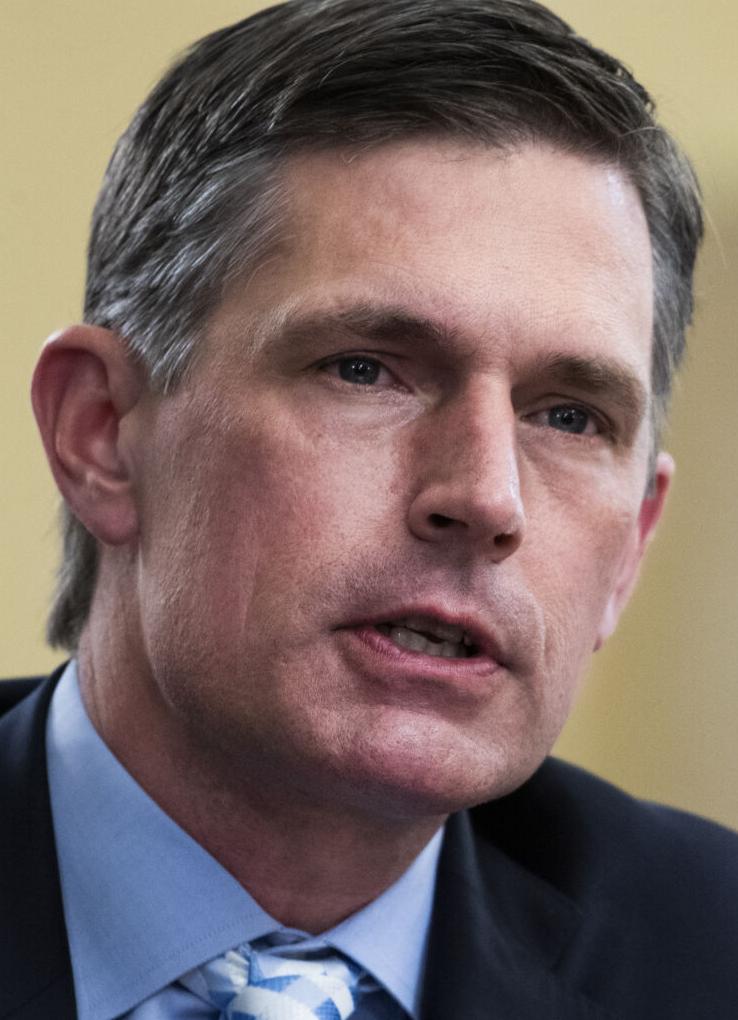 A pump jack in Carlsbad in September 2019. State Rep. Javier Martínez, chairman of the House Taxation and Revenue Committee, says that ‘the elephant in the room has always been how’ the state would replace the huge percent of revenue generated by the oil and natural gas industry.

A Milagro Middle School student raises his hand during class last month. Public education funding in New Mexico has long been heavily reliant on energy revenue, but U.S. Sen. Martin Heinrich looks to change that with the Schools and State Budgets Certainty Act.

Oil and gas have greased the wheels of New Mexico’s economy for several decades, but U.S. Sen. Martin Heinrich is planning for the day when the industry is not a central player in the state’s budget.

In a move designed to provide governments with a path away from their reliance on federal mineral revenues, Heinrich plans to introduce a revenue replacement bill next week. The proposed Schools and State Budgets Certainty Act “would provide a predictable transition for states, counties, and tribes and give those governments time to transition their budgets to more sustainable and reliable sources of revenue,” according to Heinrich’s office.

“The bill sets a baseline mineral revenue amount for each fiscal year based on a historical average of federal mineral revenue, declining by 5 percent each year,” a news release states. “If the regular mineral revenue payment to a state, county, or tribe would fall below the baseline amount for that year, an ‘energy transition payment’ would be provided to make up the difference between the actual mineral payment and the calculated baseline.”

The proposal would have significant implications as the country moves toward an economy and energy production sector that relies less on oil and natural gas. In that transition, energy-producing states like New Mexico face huge financial implications. Roughly 40 percent of the state government budget comes from revenue generated by the oil and gas industry, a large portion of which funds public education.

In a statement, Gov. Michelle Lujan Grisham said Heinrich’s proposal is the right kind of approach for New Mexico and other Western states with vast federal lands.

“This legislation would establish the kind of support we need to ensure our state revenues are protected as we continue to implement the important work of diversifying and expanding New Mexico’s economy,” she said. “I look forward to working with the senator and all of New Mexico’s delegation to get this proposal across the federal finish line.”

The state in recent years has seen its budget ebb and flow on the fortunes of oil and gas. When prices are low, as they were in the middle part of the past decade, much of the state budget and public education faced significant cuts. As fortunes improved, money again flowed into the public school budget, allowing Lujan Grisham to pin the early days of her administration on a “moonshot” that would improve educational outcomes.

“I think it’s pretty far-sighted in terms of knowing where we are today, knowing the public policies that are being proposed and talked about publicly and knowing where we need to get because of climate change,” he said.

“I think what the senator is trying to do is say, ‘This looks very real to us, and we need to be … very cognizant and plan,’ ” Jimenez said. “The nice thing about this legislation is that if it doesn’t happen in quite the way that it is expected, the legislation is flexible enough to accommodate that also.”

State Rep. Javier Martínez, D-Albuquerque, said “it’s a fact” New Mexico and the rest of the world have to transition away from fossil fuels.

“Climate change is very real, and it is an existential threat to all of us,” he said.

At the same time, Martínez said, the state relies heavily on oil and gas revenues.

Martínez, chairman of the House Taxation and Revenue Committee, said “the elephant in the room has always been how” the state would replace the huge percent of revenue generated by the oil and natural gas industry.

“This plan, while it’s still a little

early — we don’t know exactly how it’s going to shake out — but this is the first time I hear a federal leader come to the table and say, ‘Here’s an alternative. Here’s how we can get this done,’ ” he said.

“We cannot be blind to the tremendous impact that that transition will have on our budget — it’s a real thing,” Martínez added. “But I think that this proposal really does propose that bridge as we go from fossil fuels to a renewable energy economy.”

Heinrich, a member of the Senate Energy and Natural Resources Committee, is scheduled to formally announce the energy transition legislation during a conference call with reporters Thursday.

“The global energy landscape is undergoing a massive transformation, and states like New Mexico need to be ready,” Heinrich said in a statement provided to The New Mexican.

“The Schools and State Budgets Certainty Act will provide a predictable glide path for state, county, and Tribal governments to move away from their current dependence on federal fossil fuel revenues and allow a managed transition to more reliable sources of funding,” he added. “If we make the right choices now and invest in new growth opportunities, we can put New Mexico and our energy veterans who have long worked to power our country in the best possible position to thrive.”

If this works as well as farm subsidies, I can't wait till the Law of Unintended Consequences kicks in.

There certainly were a lot of empty platitudes in this article!

I find it hard to believe that many truly believe solar and wind are viable replacements for carbon, especially for those who understand the real environmental issues of both “renewables”. Ever see a lithium mine????

New Mexico ranks #50 in public education and doesn't look like it's going to change anytime soon. I have no problem with trying to diversify the energy sector. My only question I have for Mr. Heinrich's is; Where is the Energy Transition Payment going to come from? I consider myself an independent. Both Republican and Democratic parties have failed America. It's time for a Convention of the States and eliminate the Federal Government. A bunch of Politicians that do nothing but spend money that we do not have.

Heinrich would prefer we purchase our oil from the middle east.

Mathew Rawlings I question your comprehension of Senator Heinrich's Bill. I believe he is planning to use less fossil fuel in the future. It's about slowing the accumulation of greenhouse gasses in the atmosphere. It's been in the news.

Change is disruptive, painful, and invariably resisted by those with vested interests in the current business model. That does not reduce the urgency or the wisdom of the transition. The past decades have seen incredible disruptions in the workplace and the total elimination of some business sectors. The fossil fuel industry is not immune, no matter how much they keep telling us that we can’t live without them.

Senator Heinrich has thought about the problem of declining state revenues in a very smart way. We are going to transition from fossil fuels to clean energy. That is absolutely going to happen. So how does a state like New Mexico protect its budget over 20 years of transition? This proposal is all about helping states in the relatively short (20 years) term make the transition. Good for Senator Heinrich.

"I have a plan, we will print money and ignore inflation, call it good government and everyone lives happily ever after". Wow, nothing is wrong with that plan, you are so brilliant.

I suggest that anyone who is concerned how Senator Heinrich's plan could be paid for read the book "Paying Ourselves to Save the Planet." It's available on Amazon.

Did you have a similar complaint, Curtis Brookover, when the Republicans added 2 trillion dollars to the deficit to give tax cuts to the wealthy and the big corporations? Please cite us to your comment, at the time, excoriating that printing of deficit money.

[thumbup] Great comment Mr. Cook. Seems that many commenters emerge to voice criticisms that they would never make with R's in office.

The idea that printing money inevitably leads to inflation is disputed by some branches of economics (MMT in particular). It's an older idea that may or may not be true. Too many people in charge of things today lived through inflation in the 1970s and have likely had their view of things colored by that in ways that limit public policy today.

Also, inflation isn't much a problem for ordinary people if their incomes keep up with it (*). It's a bigger issue for those with high net worth, since the value of their holdings decreases over time, and that's one of the main reason why there is so much political pressure to focus on low inflation (instead of, e.g. full employment)