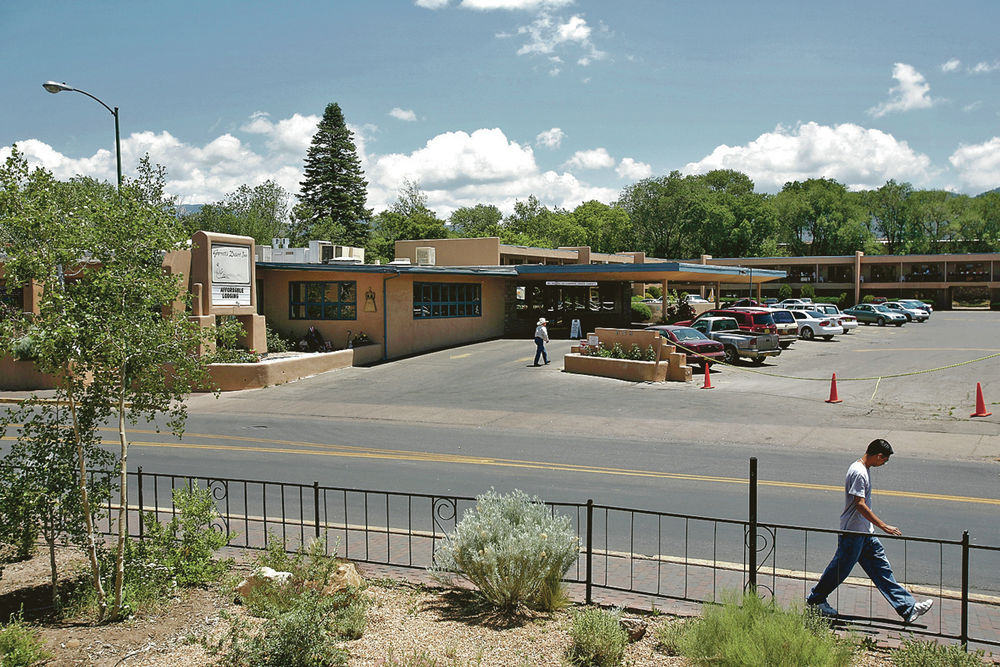 Cochiti Pueblo paid more than $8 million for the 2-acre Garrett’s Desert Inn property Thursday and traded it to the State Land Office for 9,000 acres of ancestral land valued at $4.5 million. State Land Commissioner Aubrey Dunn has set up a meeting Wednesday with the city, historic preservationists and business owners who have a stake in the property, to discuss what to do with the property. Luis Sánchez Saturno/The New Mexican file photo 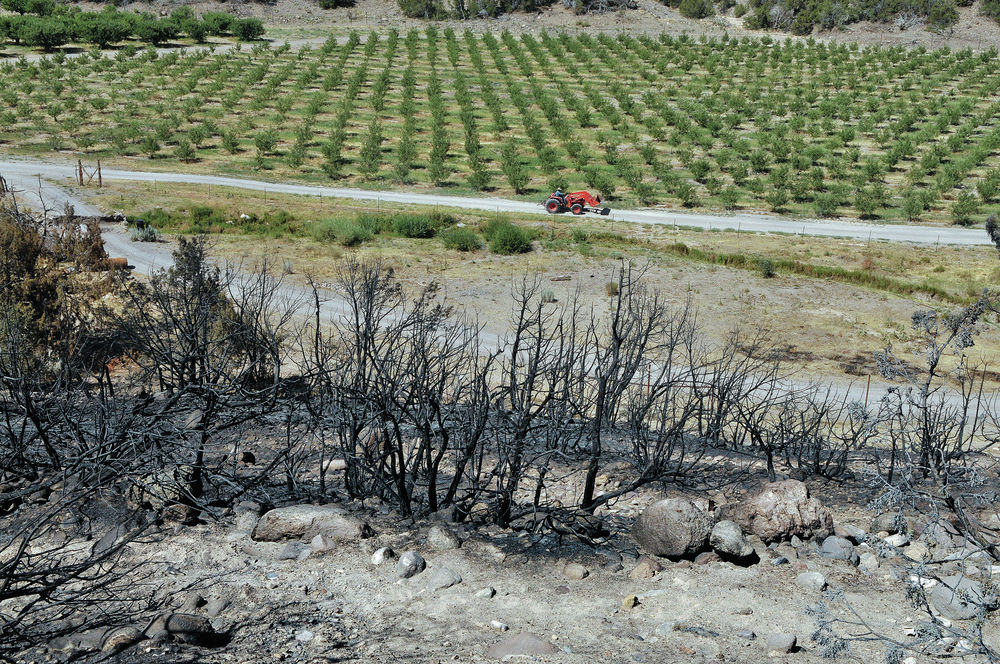 Cochiti Pueblo paid more than $8 million for the 2-acre Garrett’s Desert Inn property Thursday and traded it to the State Land Office for 9,000 acres of ancestral land valued at $4.5 million. State Land Commissioner Aubrey Dunn has set up a meeting Wednesday with the city, historic preservationists and business owners who have a stake in the property, to discuss what to do with the property. Luis Sánchez Saturno/The New Mexican file photo

The image of devastation from the 2011 Las Conchas Fire is still vivid for many Cochiti Pueblo members. First the flames scorched top soil, and then floodwaters poured down from the Jemez Mountains into the narrow canyon around their land.

But the disaster that claimed the landscape nurtured a beginning Thursday for the pueblo when the tribe closed a deal to acquire 9,000 acres of ancestral land that was washed out after the big fire and lost its value as an apple orchard.

Cochiti regained the land as part of a three-way transfer involving the State Land Office and the Catron family Trust, a longtime Santa Fe family that owned property on Old Santa Fe Trail leased by Garrett’s Desert Inn and the Santa Fe Bite restaurant. The pueblo bought that property, then traded it to the state, which had title to the former apple orchard but saw the downtown parcel as a way to generate higher annual revenue disbursements for education.

For 50 years, the people of Cochiti Pueblo have tried to reclaim land that was important to their forefathers who migrated from the Bandelier area to the more bountiful Rio Grande Valley.

“It means everything to us,” said tribal member Paul Quintana, who attended a ceremony Thursday at the State Land Office with his two children. Quintana bowed his head while elders recited a prayer. “It’s the heart and soul of who we are,” he said.

The transfer also marked the potential redevelopment of a site in the city’s historic district.

State Land Commissioner Aubrey Dunn sees possibilities for a project that opens access to a part of the Santa Fe River that is now largely closed to the public.

But Dunn will rely on a city task force that includes business owners, neighbors, historic preservationists and others to make a recommendation on the future of the land, perhaps even another hotel. That process will determine what happens to the current businesses on the site, whose leases expire next summer.

Cochiti elder Joseph Henry Suina, a retired professor of education at The University of New Mexico, said the 1,400-member tribe purchased the Garrett’s land and then sold it to the state within a few minutes.

“We owned it for all of five minutes,” he said of the motel directly across from the State Land Office building. “We didn’t even have a chance to check in.”

The tribe paid more than $8 million for the two acres. The appraisal for the Cochiti land was $4.5 million, according to Dunn.

Suina said the day belonged to the tribal people, those of today and others who have passed, who kept up hope that their land would someday be returned.

“It was the devastation of the fire, the destruction of the flooding, that made it happen,” he said.

Before the fire, the property was leased by the state to the family that operated Dixon’s Apple Orchard. Thousands of cars would fill the road down to Dixon’s every fall as people enjoyed the harvest and the family’s signature Champagne and Sparkling Burgundy apples, nurtured by the Rio Grande and famous for explosive sweetness and the right amount of juiciness.

In the wake of the flood damage, Becky Mullane, whose family had managed the farm and built up the orchard, moved away from New Mexico after she was unable to negotiate a deal with the State Land Office to save the business. The family finally agreed to a $2 million deal to relinquish their lease in 2014.

Mullane’s grandfather had started the farm in 1944. At the time of Thursday’s sale, the land was owned by The University of New Mexico and managed by the Land Office to generate revenue for the university, but that never amounted to more than $20,000 a year.

The property at 311 Old Santa Fe Trail also has an interesting history. The motel was built in 1956. The construction of the motel, which stood out as a contemporary-style building at a time when preservationists and community boosters were promoting Spanish-Pueblo Revival and Territorial architectural styles, helped lead to adoption of city-enforced architectural standards in historic districts that have come to be known as Santa Fe Style.

Gene Garrett bought the business in 1973 with his first wife, Virginia. The business passed to his then-wife Deborah Garrett when he died in 2014.

But in early 2015, the hotel ran into financial trouble and defaulted on a loan. Creditors took over management and operated the hotel for its lender, RiverSource Life Insurance Co., which is trying to recoup $2.6 million in losses before the land lease expires next summer.

Santa Fe Bite owners John and Bonnie Eckre moved to the Garrett’s location in July 2013 after a dispute with a landlord forced them out of a longtime home on Old Las Vegas Highway near Bobcat Crossing Road.

Dunn said he has already arranged for a meeting Wednesday with the city, historic preservationists and business owners who have a stake in the property. He wants to put together a request for proposals that will incorporate what the city and neighbors want to see on the site.

He then plans to seek bids to develop the property. His office is open to many possibilities, including another hotel as well as a mix of residential or commercial uses. He doesn’t know what will happen to the existing motel, but many want to see the Santa Fe Bite remain, Dunn said.

George Chavez, a broker who worked with the Catron family, said there were other interested buyers, but nothing came of negotiations. The Desert Inn property has height and development restrictions under city land-use rules for the historic area.

The State Land Office started to negotiate with Cochiti leaders to return the pueblo’s land before Dunn took office. But there wasn’t any property the pueblo owned that it could trade. When Dunn noticed the Garrett’s property was for sale, he told the tribe that might be a suitable swap. Dunn sees more long-term value for the state from a commercial parcel in downtown Santa Fe.

Additionally, the state could not buy the Garrett’s land and enter into a trade because the site had a higher appraised value than the orchard land and taxpayers would have lost money.

But for Cochiti, it isn’t about the money.

Cochiti does not operate a casino. It has limited revenue from a gasoline station/convenience store and recreational areas along Cochiti Lake.

The pueblo’s money for the purchase came from an easement agreement with Public Service Company of New Mexico for transmission lines on Cochiti land. PNM agreed to pay for that easement with a lump sum amount instead of payments over several years.

When that part of the deal stalled, Dunn said he made a call to the chief executive of the utility in July to expedite payment so the swap could proceed.

“So many things came together for this,” Dunn said. “The fires and floods were horrific, but if those hadn’t happened, this wouldn’t have happened.”