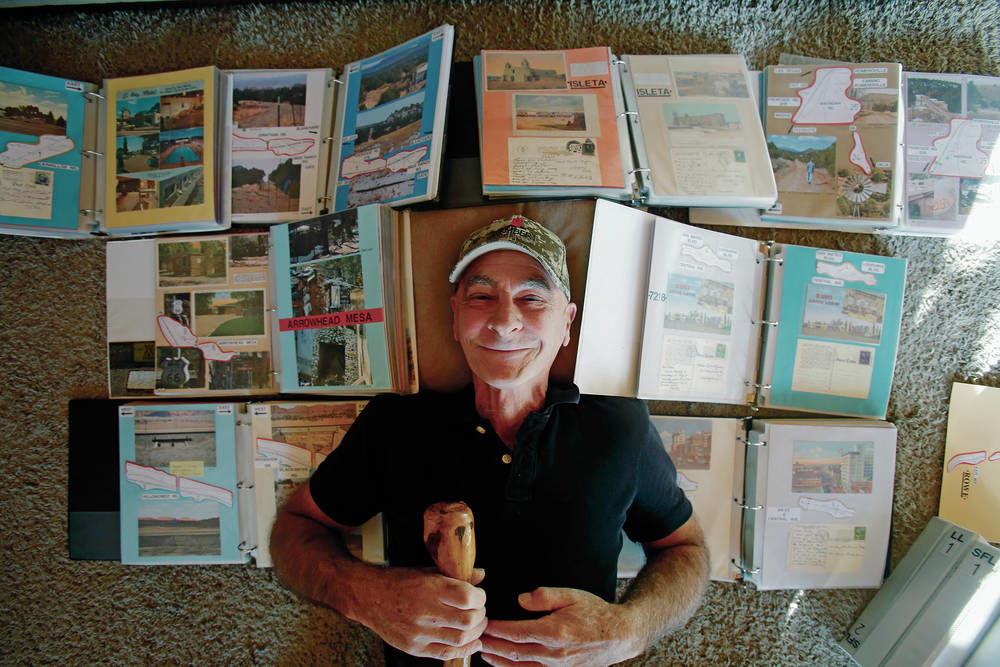 Willie Lambert, 66, of Santa Fe, poses for a portrait Saturday at his home with some of his Route 66 binders. Luis Sánchez Saturno/The New Mexican 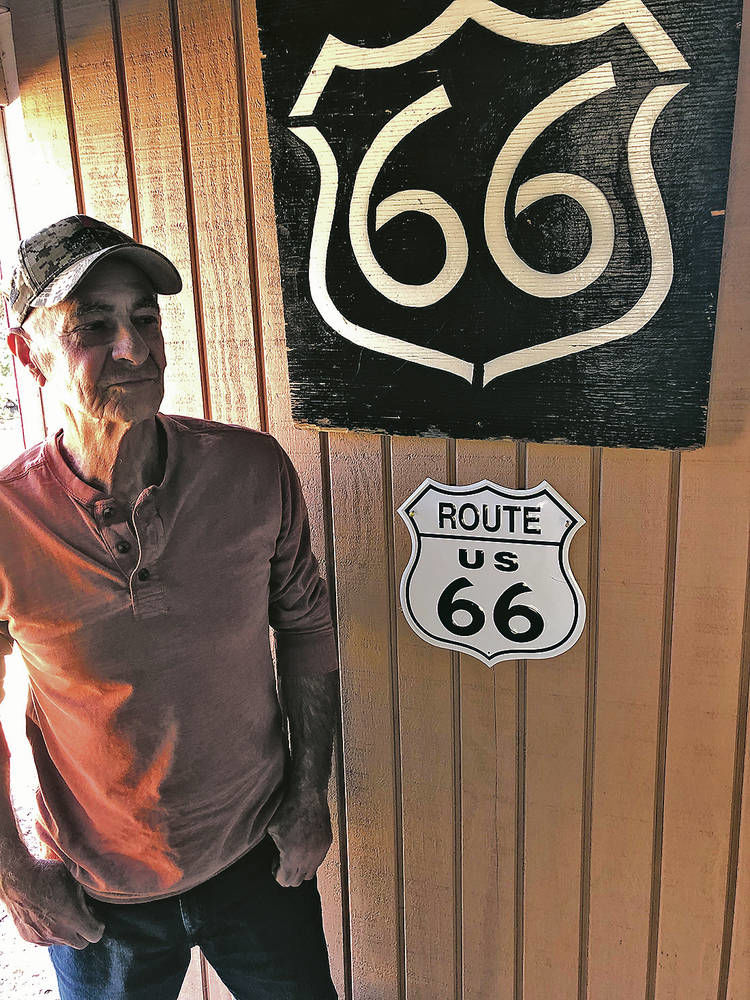 Willie Lambert has compiled 28 binders of maps and memorabilia about Route 66 in New Mexico. He says he still has miles to go, but is eager to share his collection. Milan Simonich/The New Mexican 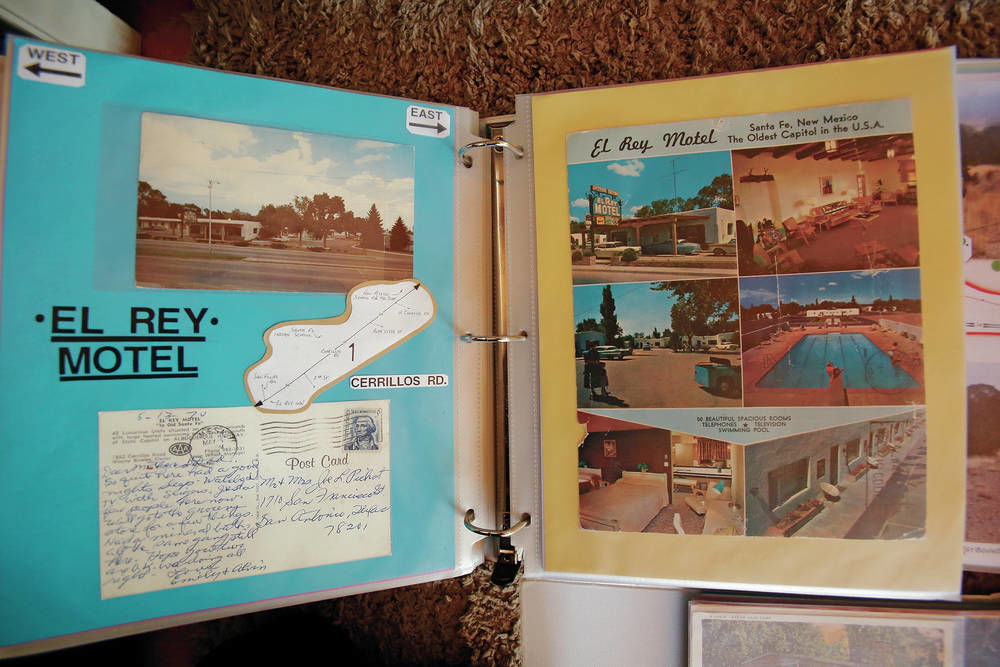 Willie Lambert, 66, of Santa Fe, poses for a portrait Saturday at his home with some of his Route 66 binders. Luis Sánchez Saturno/The New Mexican

Willie Lambert has compiled 28 binders of maps and memorabilia about Route 66 in New Mexico. He says he still has miles to go, but is eager to share his collection. Milan Simonich/The New Mexican

Willie Lambert can provide a succinct account of the unsolved double murder in 1967 in Budville, a speck on America’s most famous highway.

He understands the pull a rattlesnake pit near Moriarty had on curious travelers. Lambert isn’t clowning when he discusses Bozo’s Garage spawning the Route 66 Auto Museum in Santa Rosa.

He wants to share everything he knows about Route 66. In turn, he hopes to learn more about an old road that still has its mysteries, though it’s long been memorialized in story and song.

Lambert, 66, of Santa Fe has compiled 28 fact-filled binders about the decommissioned highway’s path through New Mexico.

In meticulous detail, he has mapped sections with the aim of reconstructing the highway’s alignments.

Other parts of his collection brim with a thousand postcards tied to Route 66, wildflowers that blossomed along the road and characters he’s met in the course of his research. One man was riding his horse from Ardmore, Okla., to Santa Fe to audition for a movie.

Discoveries from the earth excite Lambert most. He finds a photo from one of his excursions to make his point.

“Here’s a piece of old pavement with a white strip,” he says, calling it the best evidence that he’d pinpointed a spot where Route 66 was once aligned.

His attempt to reconstruct the path of Route 66 is a monumental job. Miles of the old road — he’s not sure how many — are now behind gated private property.

“I realized something when I first started looking into this. It’s a big puzzle,” Lambert said. “There’s no book where you can get all the answers. They dance around the alignments.”

His aim isn’t to write a book of his own, but to compile all the details he can for public consumption. Lambert in some ways is a low-tech researcher. He doesn’t have copies of any of his findings, including intricate maps he has made by checking parts of Route 66, such as a frontage road in Romeroville and a truss bridge in San Jose.

Commissioned in 1926, Route 66 traversed eight states. Its starting point was Chicago and it stretched 2,448 miles to the Santa Monica Pier in California. Lambert’s focus is the 487 miles the original Route 66 covered in New Mexico.

A native of New Jersey, he drove west after high school, looking for adventure. Santa Fe was like no place he had ever seen. He stopped to drink in its sights and stayed.

Making a living became another series of adventures in New Mexico, Texas and then back again.

He’s worked for a railroad and casinos, as a flea market vendor and as a seasonal employee for the Forest Service.

His curiosity about Route 66 began 15 years ago when an older sister wanted to explore the road. It was decommissioned in 1985 but still fascinates generations.

Lambert’s interest in the old highway has grown to an obsession. He has even created a Route 66 crossword puzzle, though he admits it’s as unfinished as his research.

His explorations were interrupted when his son spotted a lump protruding from his neck. Lambert had done his utmost to ignore the growth. He had late-stage cancer of the tonsils by the time he saw a doctor.

All his teeth were pulled as he underwent 31 rounds of radiation. Lambert also spent a total of 80 hours in a hyperbaric oxygen chamber to ward off infection and help in his recovery.

He is free of cancer but so weary of medical procedures that he won’t get dentures. Lambert hasn’t worked much since the treatments. His wife is in the landscaping business, and he helps maintain a spacious home where they serve as caretakers.

Sharing his discoveries about Route 66 has become his abiding interest. Anecdotes pour from his memory.

The murders in Budville are just one example. A wide spot an hour west of Albuquerque, it was named for Howard “Bud” Rice. He was one of Route 66’s early entrepreneurs, starting in 1928.

Bud and his wife, Flossie, ran a grocery, a trading post and an auto repair business. Bud had good connections to politicians and police officers. He became a justice of the peace in the ’50s, drawing complaints that he oversaw a speed trap on his part of Route 66.

A robber entered Bud’s trading post one night in November 1967. He stole $150 in paper money and an assortment of old coins. Then he executed Bud and an 82-year-old woman who worked at the store.

Police eventually arrested Billy Ray White, 26, in the murders. A jury acquitted him after deliberating less than two hours.

The Budville murders remain unsolved, just one of the question marks about Route 66 in New Mexico.

Lambert is pursuing other unknown aspects of the highway, its paths and personalities.

He’s in for a long trip, which suits him fine. The road is better than the inn.