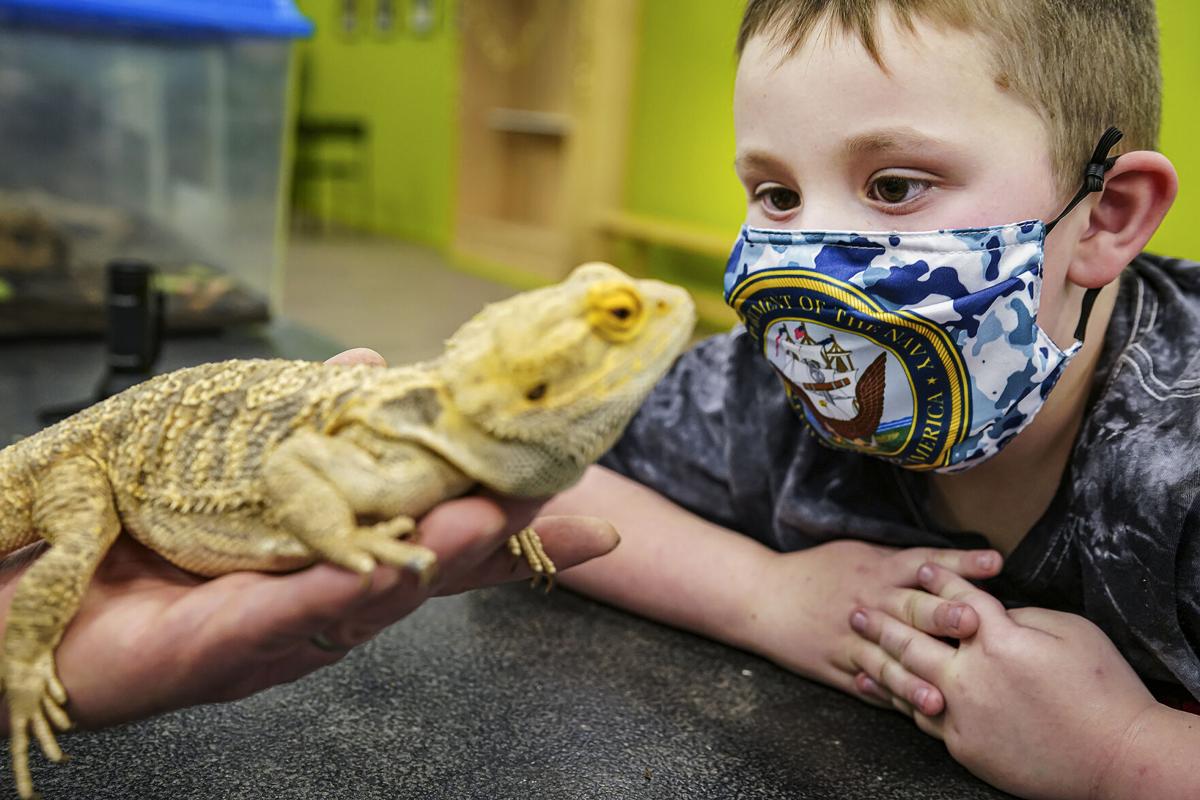 Kian Bradshaw, 6, visiting from Roswell, looks into Demmy the Bearded Lizard’s eyes at the Harrell House Bug Museum on Tuesday. The museum is being forced to leave its spot in Santa Fe Place mall just six months after it moved there. 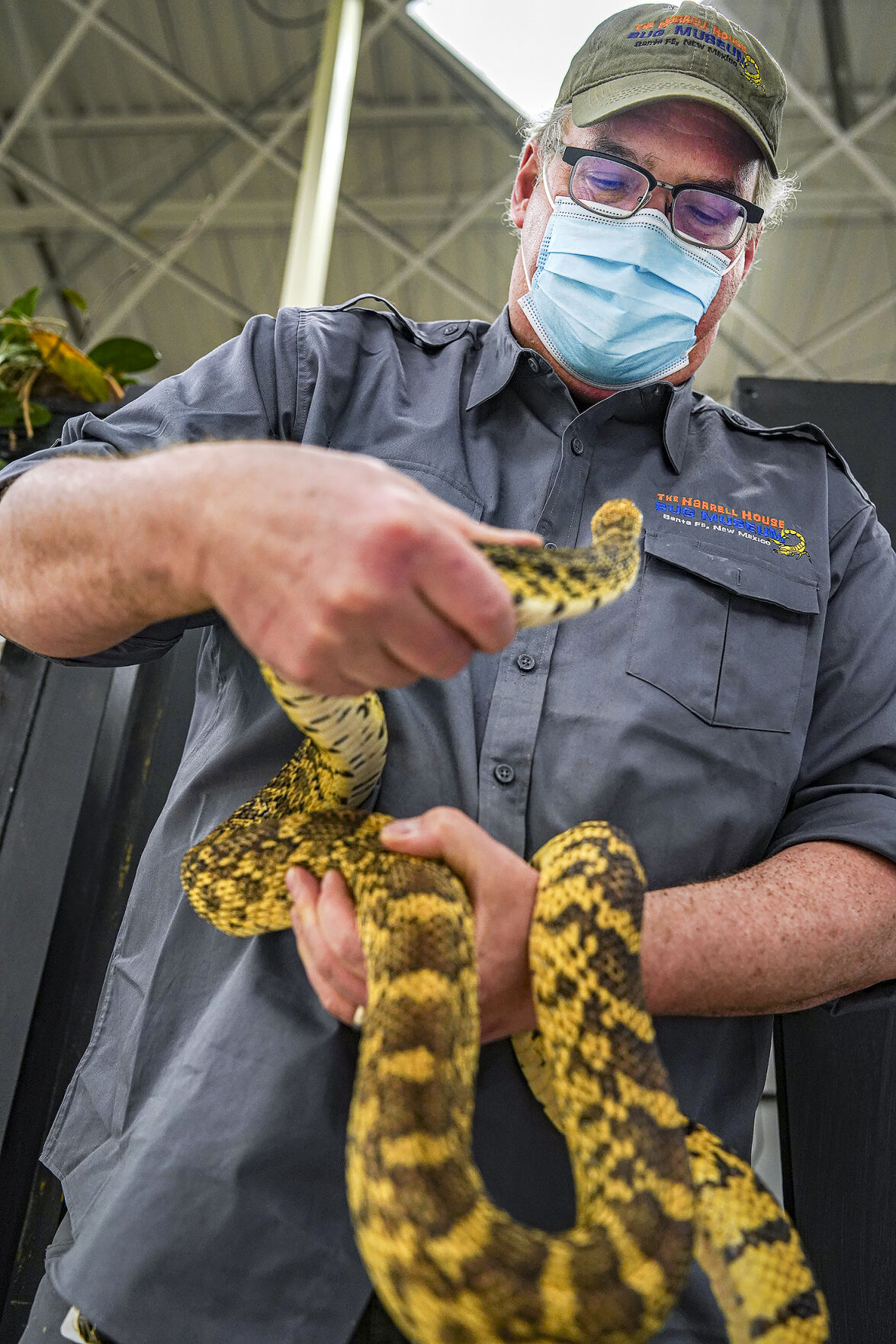 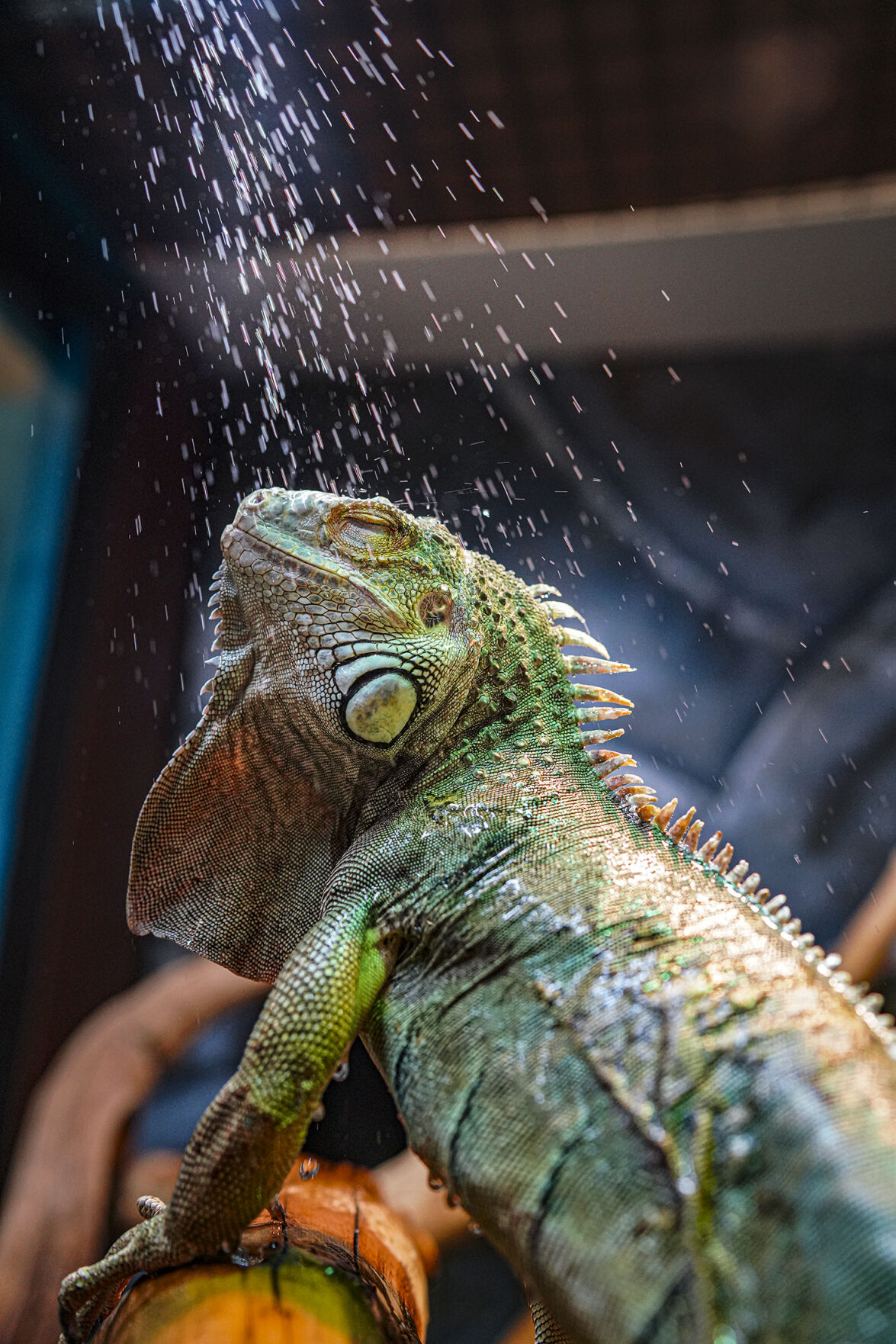 Spike the Iguana, one of the many species on display at the Harrell House Bug Museum, gets misted by museum owner Wade Harrell on Tuesday afternoon.

Call it a bug out and not a happy one at that.

Traveler’s Market and the Harrell House Bug Museum were notified Friday they will have to move from their spaces at Santa Fe Place mall by Jan. 5 — only about six months after they’d arrived.

The new anchor tenant is believed to be Conn’s Home Plus, a Texas home goods chain with more than 140 stores across the Southern United States.

“I cannot confirm it is or isn’t Conn’s at this time,” said Santa Fe Place general manager Jim Schertzing, saying an anchor tenant announcement is expected in the coming days.

The lease allows the mall to give as few as five days of notice to vacate a space, but Martin said she was granted an extra 20 days because of the complexity to clear out 47 vendor spaces. Traveler’s Market will close Dec. 31 and the bug museum Dec. 30.

Both had just moved into Santa Fe Place in the summer after many years at DeVargas Center near downtown.

Harrell House Bug Museum owner Wade Harrell said he likely will permanently close the live and mounted bug display and live reptile museum unless there is “a miracle.”

“It took everything out of us physically and emotionally to move into here, and we don’t have any money left,” Harrell said. “I make more money delivering pizza than doing this.”

The mall’s management said it offered the museum a different spot in Santa Fe Place.

Martin wants to reopen Traveler’s Market somewhere else, if she can find a 10,000- to 20,000-square-foot space. She had 14,000 square feet at DeVargas, where she started the tribal, ethnic, folk art and antique market in 2006, first in the space now occupied by The Alley Lanes and Lounge and then the former location of Hastings Entertainment.

“I hope to restart somewhere else,” she said. “We are all in debt because of the

move. We would like to continue. All of us have too much treasure left to put in a garage.”

She now has 47 vendors with individual gallery spaces, more than she ever had at DeVargas. Martin, a native of Papua New Guinea, has a gallery with art from there and the Solomon Islands, Vanuatu and Fiji.

“Heartbreak,” Martin said, describing her reaction to having to leave the mall space. “It’s the livelihood for many, many of us.”

“It was like being punched in the stomach,” Harrell said. “I just couldn’t believe it. We had no idea it was going to be that soon.”

Both stores noticed many more south-side residents in their area than when they were downtown.

“We get a lot more foot traffic here,” Harrell said. “Once we opened, there was foot traffic in summer like we have never seen.”

Is there anyway the bug museum could move to another part of the mall if the community volunteers to help move them? I would show up to help!

Traveler's Market is a unique business in our community, a source of great gifts of ethnographic art, and a place to learn about the beauty of the creative spirit from all over the world. It would be a great shame if they cannot find a new location for their store.

Traveler's Market is a wonderful source of intriguing ethnographic art from all over the world. A great place for gifts of all kinds. It is, and has been for many years a unique business in our community. What a great loss for Santa Fe if it does not find a new location.

What a fitting quote, for sure it well describes the 'increasing' trend

that has been going on in and around these parts for the past decades...

My experience in Texas with Conn's about 10 years ago was at best an uneven one. Here's hoping the service is better and the hard sell toned down.

No recourse if the lease has only a 5-day required notice and they gave at least that. From the article, it seems they were given at least 4 times that. Leases are very cut and dry. It seems the mall offered other space but that was turned down by the owners. When I rented space we were given a lower rent because of the less than desirable terms, seems like that is what happened here.

Businesses (and usually individuals who are renting) sign a lease. The lease states the terms to which both sides agree. What "recourse" should there be if the landlord is acting within the terms of the lease? When offered a lease that gives the landlord the right to terminate with FIVE DAYS notice, shouldn't that have been a red flag that the mall was just looking for a profitable "filler" tenant while they sought something bigger? I think the mall is making a HUGE mistake; they're trading two unique tenants that draw a crowd, for one more "home goods" store of which we hardly have a shortage AND they're sacrificing public goodwill to do it. They'll now be, "The mall that killed off the bug museum." I'm not sure how they see that as a profitable tradeoff. And I will NEVER shop at the replacement store.

Wade and Beth are wonderful people who add so much to our city. What a shame.