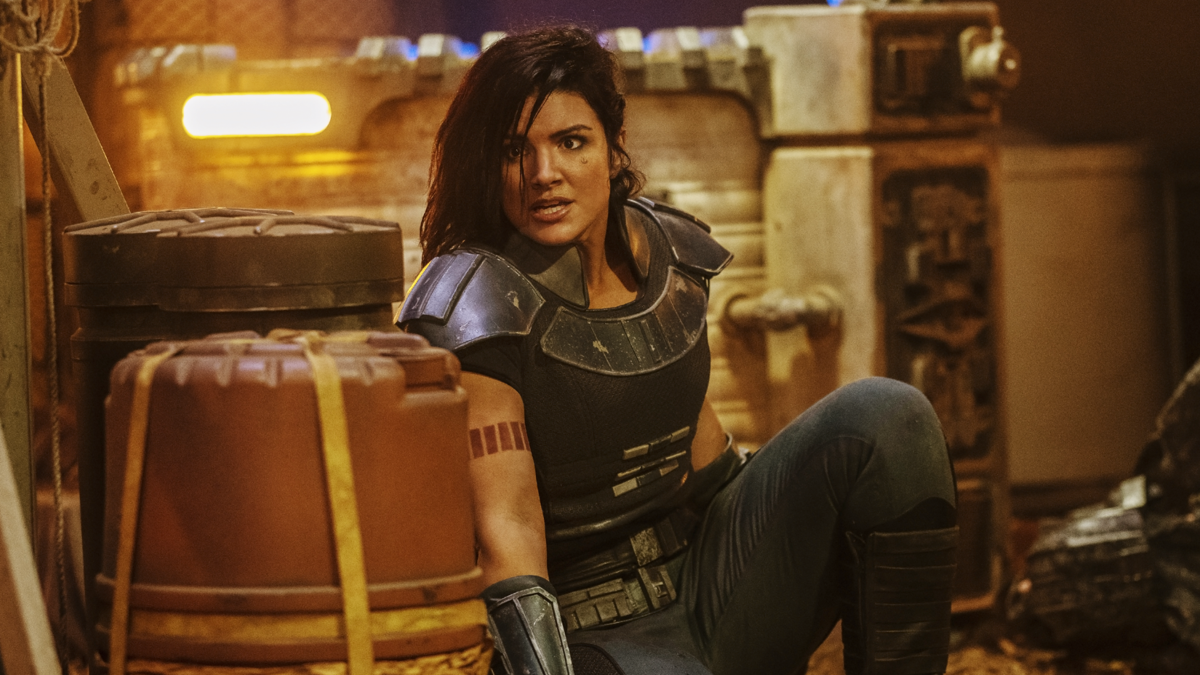 In designing a hairstyle for Cara Dune, played by Gina Carano in The Mandalorian, Maria Sandoval said she sought to preserve the former mixed martial arts fighter’s femininity. 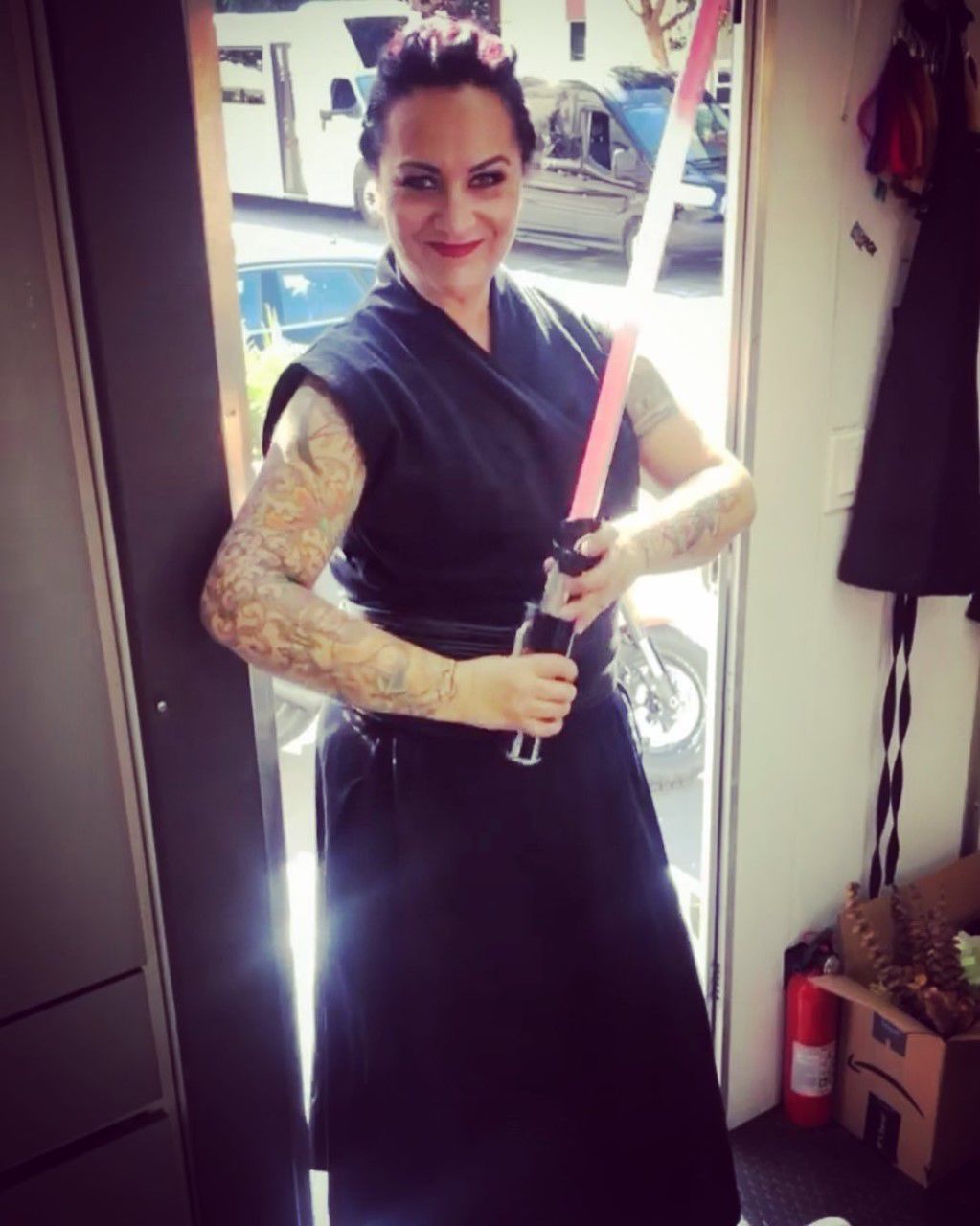 In designing a hairstyle for Cara Dune, played by Gina Carano in The Mandalorian, Maria Sandoval said she sought to preserve the former mixed martial arts fighter’s femininity.

At 6 years old, Maria Sandoval remembers walking with her older sister from their family’s home on Bishops Lodge Road to The Lensic Performing Arts Center to see the first Star Wars movie.

Like so many others, she was hooked. Throughout the summer of 1977, the two sisters saw the film 14 times.

More than 40 years later, Sandoval — with a tattoo of Princess Leia on her calf, several handmade Jedi costumes for herself and her daughter in the closet, and a yard filled with Star Wars-themed Christmas lawn ornaments —  is the lead hair stylist for the recently released Star Wars television series, The Mandolorian. Being part of what is currently listed as the most-in-demand show in the world, Sandoval said, is a way she can give back to a storyline that made such an impact in her own life.

“[Star Wars] is so iconic, it’s so big! Now, I have a small part in it that’s lasting,” she exclaimed. “I’ve been wanting this particular job since I was 6 years old.”

Sandoval,  born and raised in Santa Fe, first started cutting her friends’ hair and experimenting with different styling techniques when she was in high school — long after her Star Wars fandom began. When her mom moved to Washington, Sandoval commuted back and forth between Santa Fe and the Pacific Northwest, where she eventually decided to attend beauty school.

After completing cosmetology school, Sandoval returned to New Mexico to work at now-defunct Salon Santa Fe,  and later Hair to There. Around that time, she said, she started dating an actor who mentioned a local film production team was in dire need of hair assistance. While still working at the salon, she stepped in to help. The first movie she worked on was the 1995 filmEast Meets West.

“I had no idea what I was doing,” Sandoval said with a laugh, noting the aesthetic was 1800s-era hairstyles. Still, she found success in the role and went on to help with various other films set in and around Santa Fe.

Eventually, Sandoval, now 48, decided to enroll in New York University’s Tisch School of the Arts, where she took a filmmaking course, as well as a special effects and makeup class. After the experience, she said, she felt certain she wanted to pursue makeup rather than hair in Hollywood. With her eyes fixed on her newfound dream, she moved to Los Angeles within a year.

Upon her arrival, she noticed how competitive the makeup scene really was.

“Everybody and their poodle out here wants to be a makeup artist," she said.

Noting the shortage of hair stylists, she eventually made the switch and joined a hairstyling union. The first movie she worked on as a unionized employee was Who’s Your Daddy in the early 2000s.

Not long after, while working on Pirates of the Caribbean as a “day-checker,” or hairstylist who attends to any necessary role, people started to recognize her talent. At first, she said, “I was just a hairdresser in a room full of hairdressers.” But eventually, she moved up. Since then, she’s worked on at least 100 movie and television sets, and has served as department head for shows including Medium and the Star Trek TV series, and movies like The Devil’s Rejects.

When she was pregnant with her daughter, Riley Nordstedt, now 9,  she promised herself to monitor her work balance. But when the opportunity came to lead The Mandolorian, Sandoval said, “I asked [Riley] for permission, and she said I had to do it. She is very aware of how important Star Wars is to me.”

Sandoval landed the position as artists in L.A. do: Working the ladder, networking with people in the industry and being in the right place at the right time. Her selling point to the decision-maker: “No one knows this material like me.”

Unlike the times when she was teased for her Star Wars fandom as a child, “on the show, I’m celebrated for it.”

In the position, Sandoval said she spends about 45 minutes each morning doing hair for at least two characters. Throughout the day, she said, she keeps an eye on each character’s hair, to make sure everything is in place.

“If hair falls one way in one part of the scene, it has to fall on that same part in the next scene. It sounds nipicky … but it’s very important,” she said.

Each week is comprised of about 70 hours of work, plus two hours of L.A. commuting each day, but she said being part of the show makes the labor worth every minute.

The best part, she said, is that, in many ways, she feels like she’s finally part of a fantastical world she’s longed to live in since she was a child.

She tested her creativity largely with her favorite character, Cara Dune, played by Gina Carano.

Originally, Sandoval said, folks on the show envisioned Dune with short hair, buzzed on one side, but Carano expressed she “wanted to keep her feminity.”  Sandoval pulled together a shoulder-length hairstyle with rough edges — “not long flowing locks while she’s kicking ass.” The result is a look recognized all over the world, she said.

“I was part of that,” she said. “I thought it up and did it myself, and now it’s on an action figure!”

For friends and family, Sandoval’s success is no surprise.

“Maria always wanted to live in a fantasy world, that’s why she’s so good at hair,” said her older sister, Emiliana Sandoval. “She’s always been very expressive. It’s always been about creating weird and unusual hair. It just makes perfect sense that that’s where she wound up.”

Anneliese Boise, Maria Sandoval’s best friend since they were in kindergarten, and also a Santa Fe native who moved to L.A. to pursue wigmaking, agreed: “The thing that sets her apart is that she sees the land and the world of it, and she can just picture how [the characters] should look … Her creativity, to create that Mandalorian world, it just amazes me.”

Unfortunately, Sandoval said, many people undermine the impact behind-the-scenes work, such as hairstyling, has on a show’s success.

“People say, ‘Oh, you’re just a hairdresser,’” she said. “It’s like, ‘No, this is super important to creating this particular world.”

As the latest Star Wars movie, The Rise of Skywalker, debuts Friday,  and producers look to wrap up the second season of The Mandalorian in spring 2020, Sandoval said she's proud to be part of a story that has changed so many lives, including her own.

“Very few people get to actually, really do what they love … This is a dream that doesn’t seem achievable when you’re 6 years old, and then all the sudden, there you are,” she said. “To be part of the things that are so important to me since I was a kid — these things that shape you, and then you get to actually shape them — it’s really amazing."