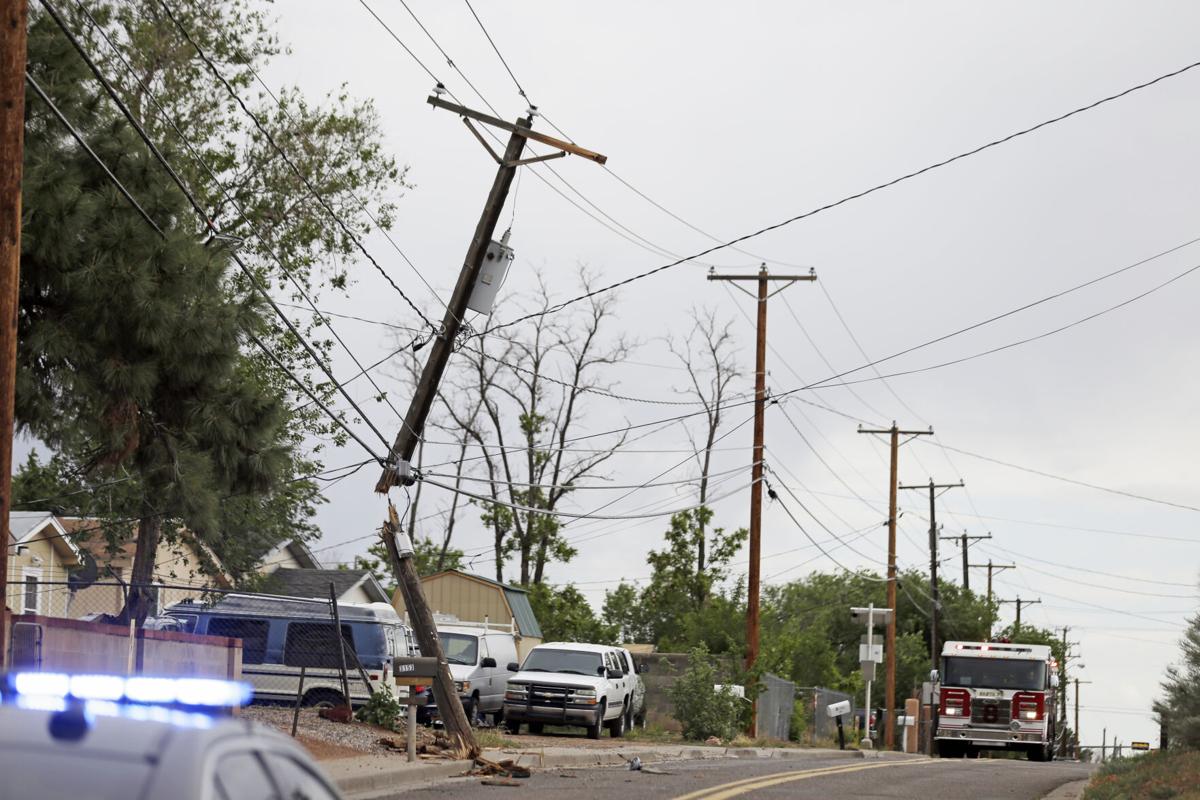 A utility pole was severed Monday on Jemez Road after being struck by a car. The accident, which occurred while a fast-moving thunderstorm hit the region, briefly interrupted power to the area. 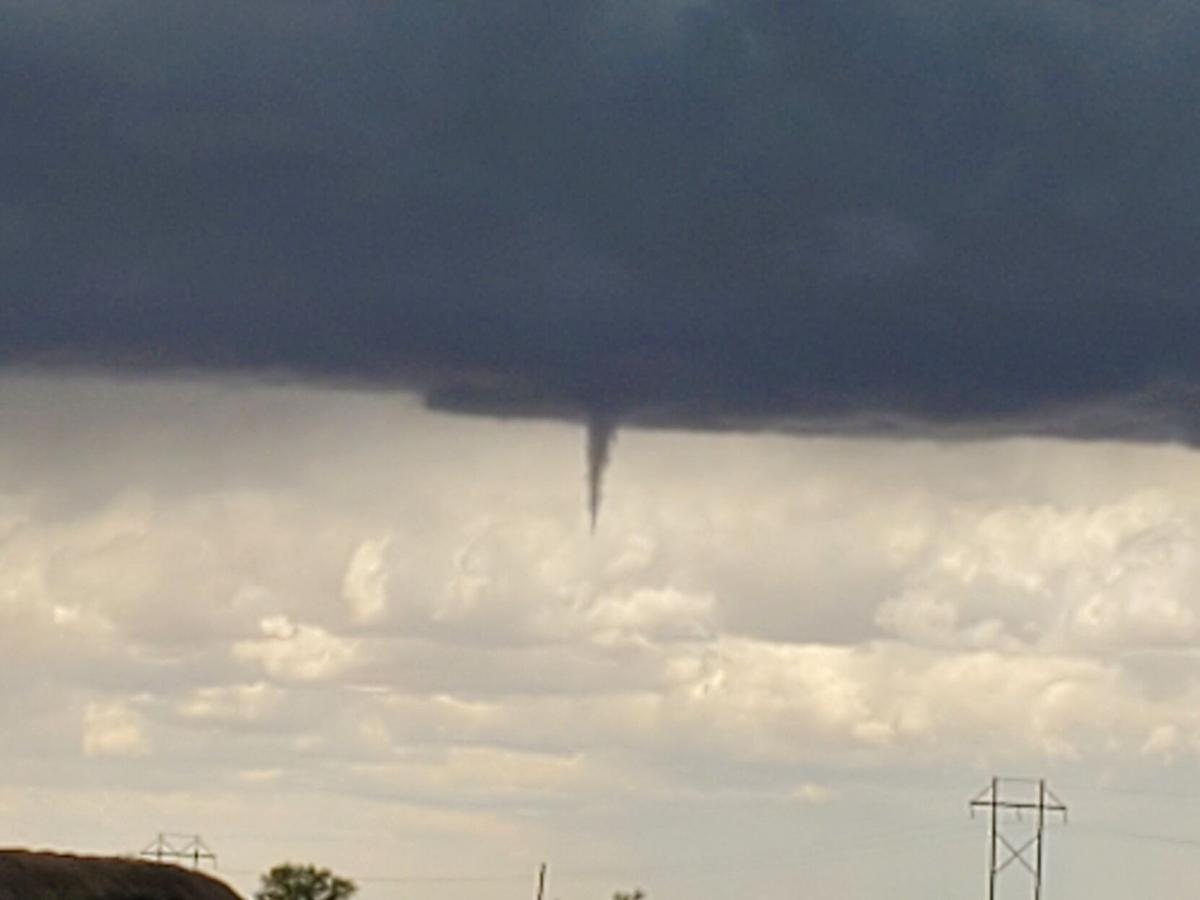 A utility pole was severed Monday on Jemez Road after being struck by a car. The accident, which occurred while a fast-moving thunderstorm hit the region, briefly interrupted power to the area.

The storm system that moved through much of the eastern and northern parts of the state Monday brought some much-needed rainfall — and even more drama.

The weather system that rolled into the area formed a small, fast-disappearing landspout tornado near Santo Domingo Pueblo in Sandoval County, and other weather watchers — including the Santa Fe National Forest, which captured a striking photo of a small, dagger-like spout — saw funnels that indicated this wasn't just a typical spring storm.

Scott Overpeck with the National Weather Service in Albuquerque said landspout tornadoes "happen fast, dissipate fast and are pretty hard to warn for."

He said those tornadoes quickly "spin up" and come to an early end.

The weather may be unsettled for another day. While the worst of the weather may be over for the Santa Fe region, another storm front will bring the potential for thunderstorms and cooler temperatures Tuesday.

The National Weather Service puts the odds of a Santa Fe rainstorm Tuesday at 30 percent.

"There's the potential for showers and thunderstorms towards the northern part of the state Tuesday," said Daniel Porter of the National Weather Service.

He said Tuesday could be the coolest day of the week, with temperatures dropping five to 15 degrees lower than usual for this time of year.

For Santa Fe, that could mean enduring a day in the mid-60s instead of the near-balmy low-80s temperatures the city has been enjoying of late.

There's a slight chance of more rainstorms through the weekend, but Porter said the area should expect higher temperatures and warnings about extreme-fire-risk weather as well.

Monday's fast-moving system brought heavy hail, thunderstorms and the threat of damaging tornadoes to much of the east and southeastern portion of New Mexico before it moved toward Texas.

"This is our time of year for them [tornadoes]," Overpeck said. "Do we get as many as the Central Plains — Oklahoma, Kansas, Arkansas? No."

Carl Hansen, chief of the Madrid Volunteer Fire Department, said some Madrid residents spotted small tornadoes in the mountains around the village during Monday's storm.

The storm brought hail and rain to Madrid, but there were no reports of damage, he said, "other than maybe tomato plants."

The same could not be said for Santo Domingo Pueblo after high winds and hail damaged homes and cars in the area. Tribal Programs Administrator Herman Sanchez said one woman was displaced from her home after winds tore off her roof.

The Santa Fe Fire Department responded to a vehicle crash around 4:30 p.m. Monday after a car ran into a utility pole on Jemez Road, knocking out power and tangling the severed pole in power lines. Witnesses who called emergency dispatch reported seeing a silver Lincoln hit the pole then drive away, said Fire Battalion Chief Josh Mihelcic.

Mihelcic did not confirm if the crash was related to the severe weather in the afternoon. Santa Fe police said officers responded to the accident as well but were unable to provide further information.

The Jemez Rd. incident was not auto related if there was one we would have had that auto in our front yard. It was lightning that cracked that pole. Fun fact that pole hadn’t been replaced for over 50 years.

I live in SW Santa Fe, and some of the winds out here just before the thunderstorms hit were very strong (a gust stripped the canvas cover off one of my patio chairs!). I think that was about the same time that people spotted what looked like a funnel cloud out past the airport ...

:) 'Always a treat to connect with and experience the energy/spirit of Living vitality, gratitude for the rain.'

I was out on a bike about 4:30 yesterday, around the time that the phone pole was hit. I was perhaps a mile and a half from that location. It was windy (and a bit cold), but not raining. The roads were drying from the earlier rains. It seems unlikely that the weather was a factor in the accident, unless the driver was studying the clouds.

Quite the little storm. I was riding my bike up to the Santa Fe Ski Basin yesterday and got up to the IV Overlook close to noon and it was getting really black with heavy clouds up ahead. I turned around and saw that it was socked in completely behind me too, so rather than face a thunderstorm at ten thousand feet, I decided to abandon the rest of the climb and get down from the alpine. The storm hit shortly after I got back to Casa Solana so I guess my decision was premature, but the ride back down and home was into massive winds. By the time I got home my two index fingers were numb from gripping the handlebars.

There was a lady who looked like she wanted to finish the climb still headed up the hill and I passed her again as I descended. Hope she missed the storm!