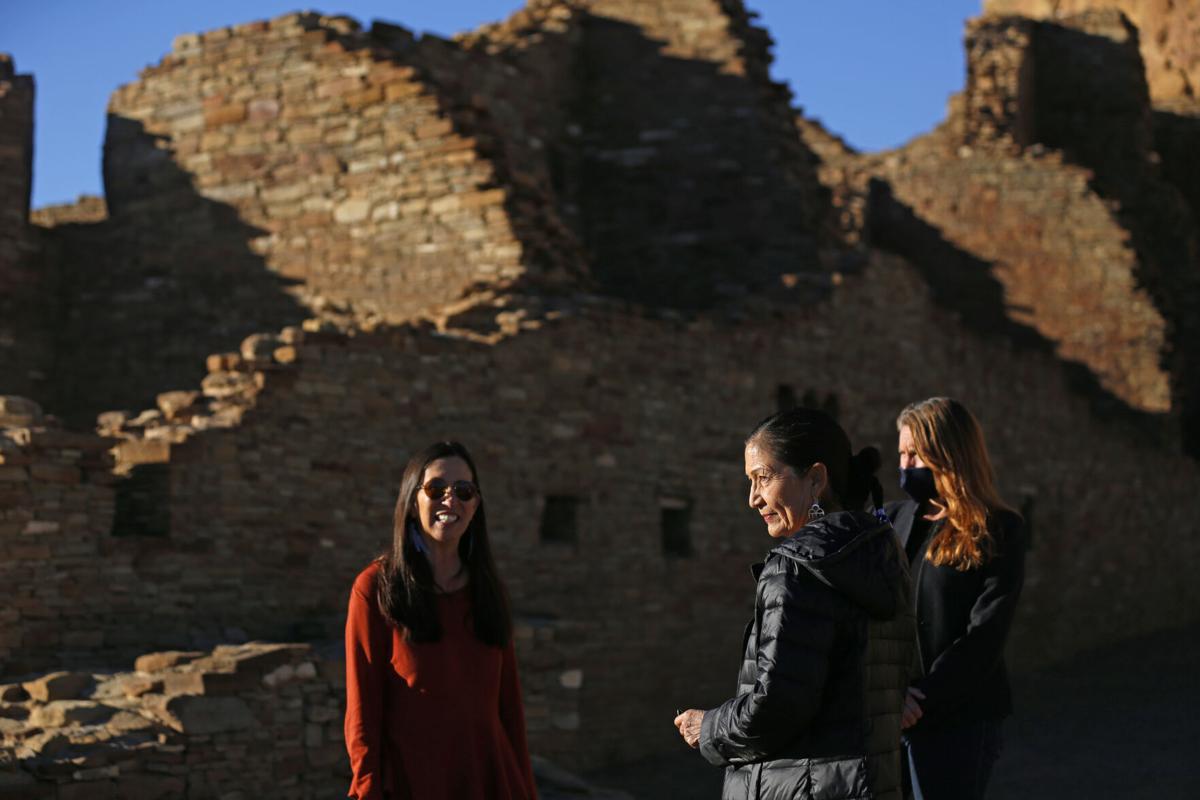 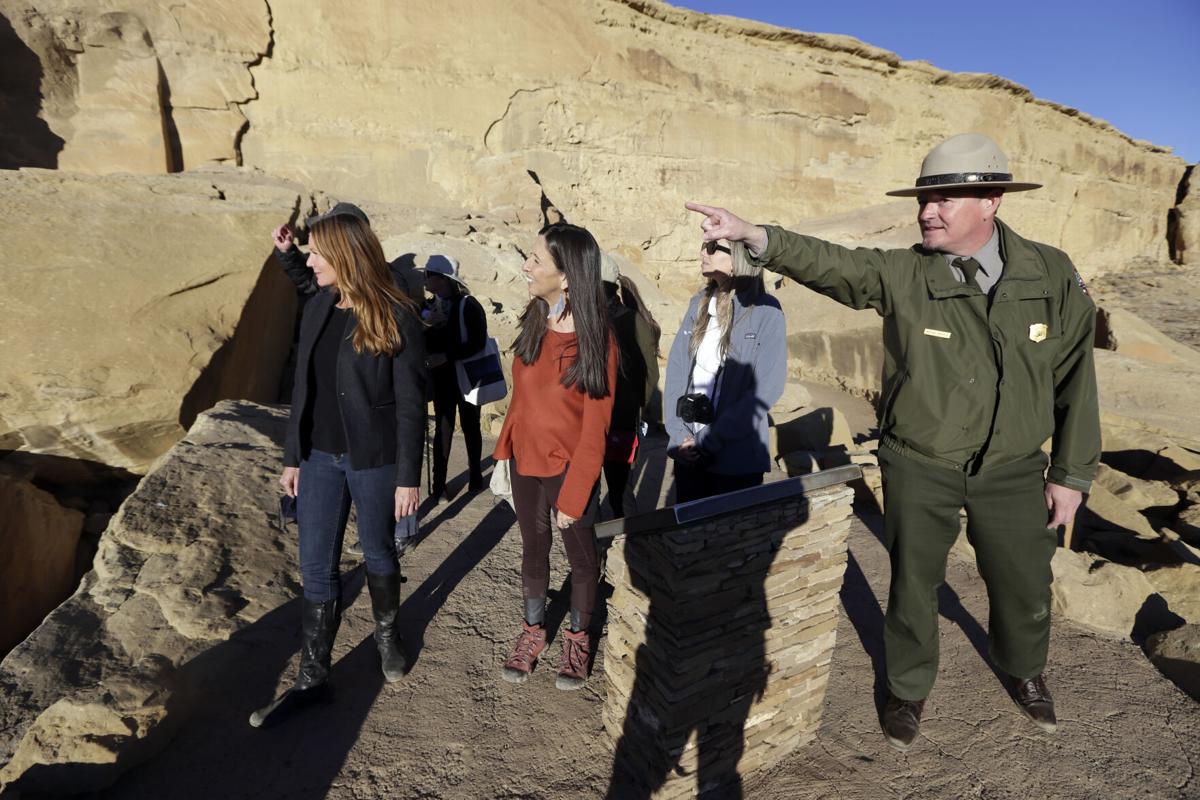 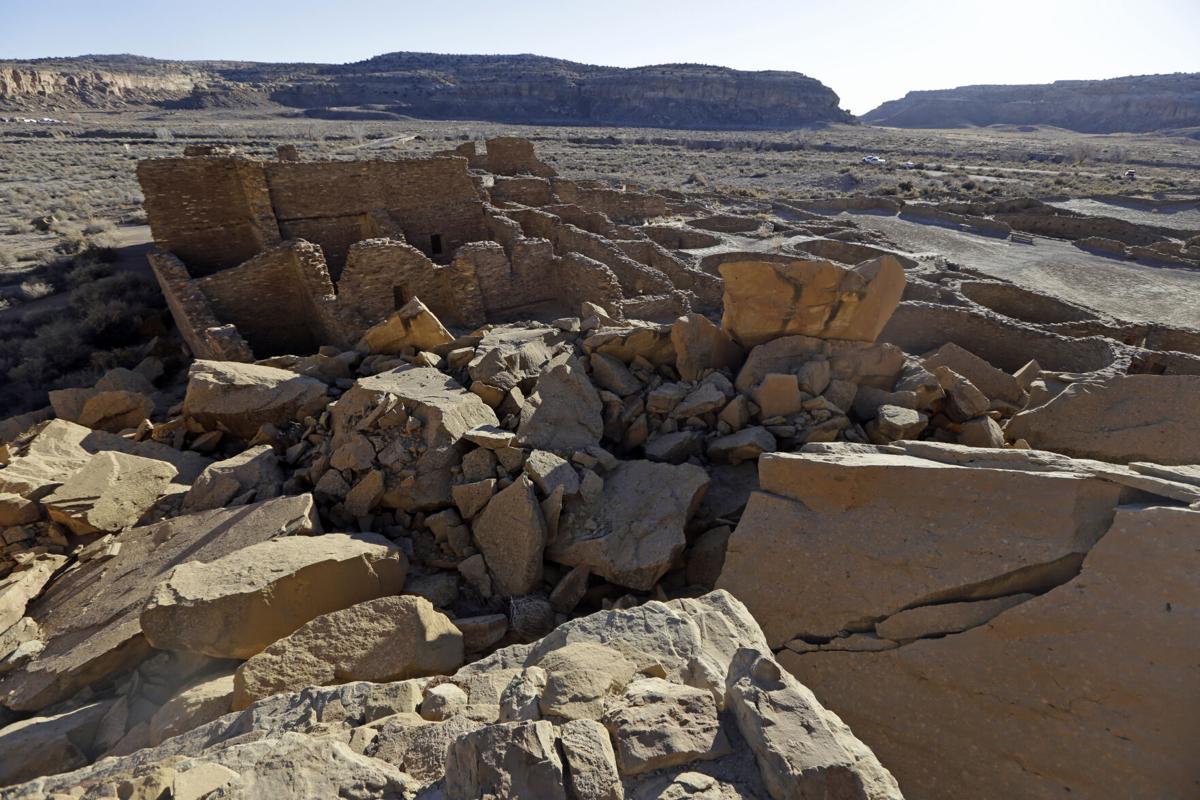 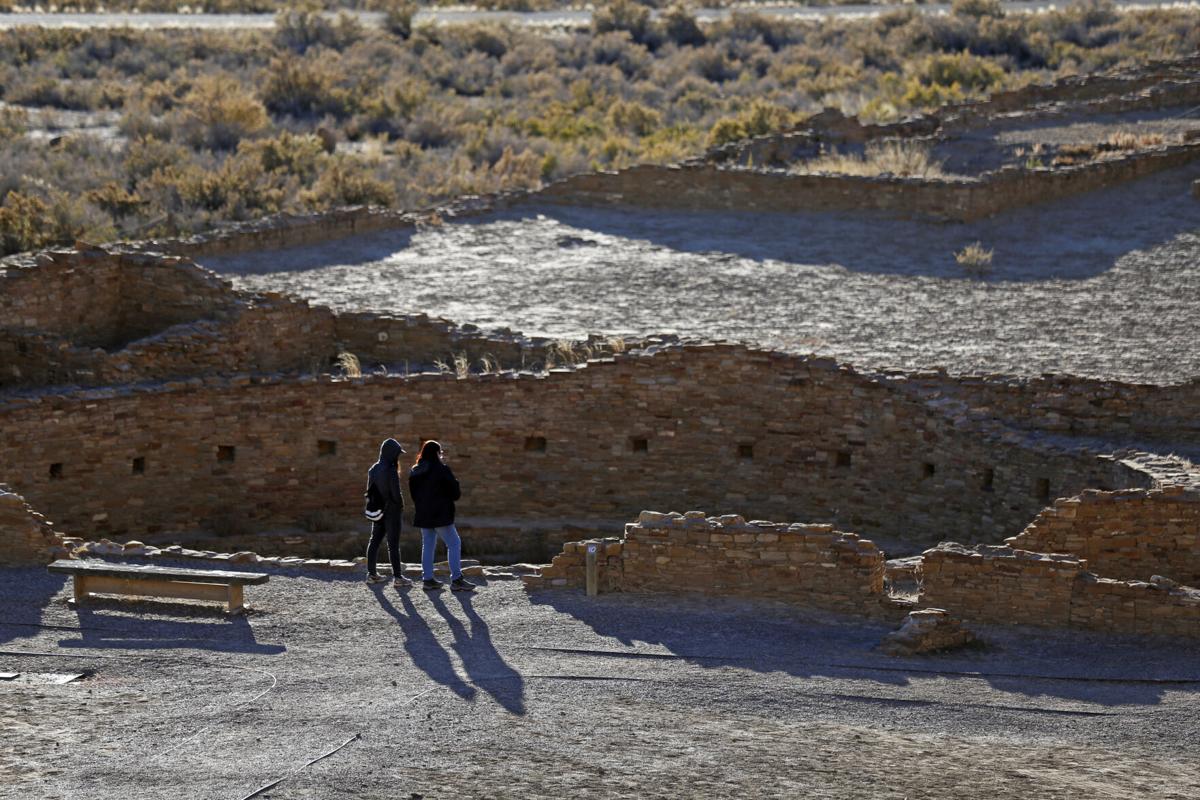 Two visitors stand next to a kiva at Pueblo Bonito at Chaco Culture National Historical Park on Monday. 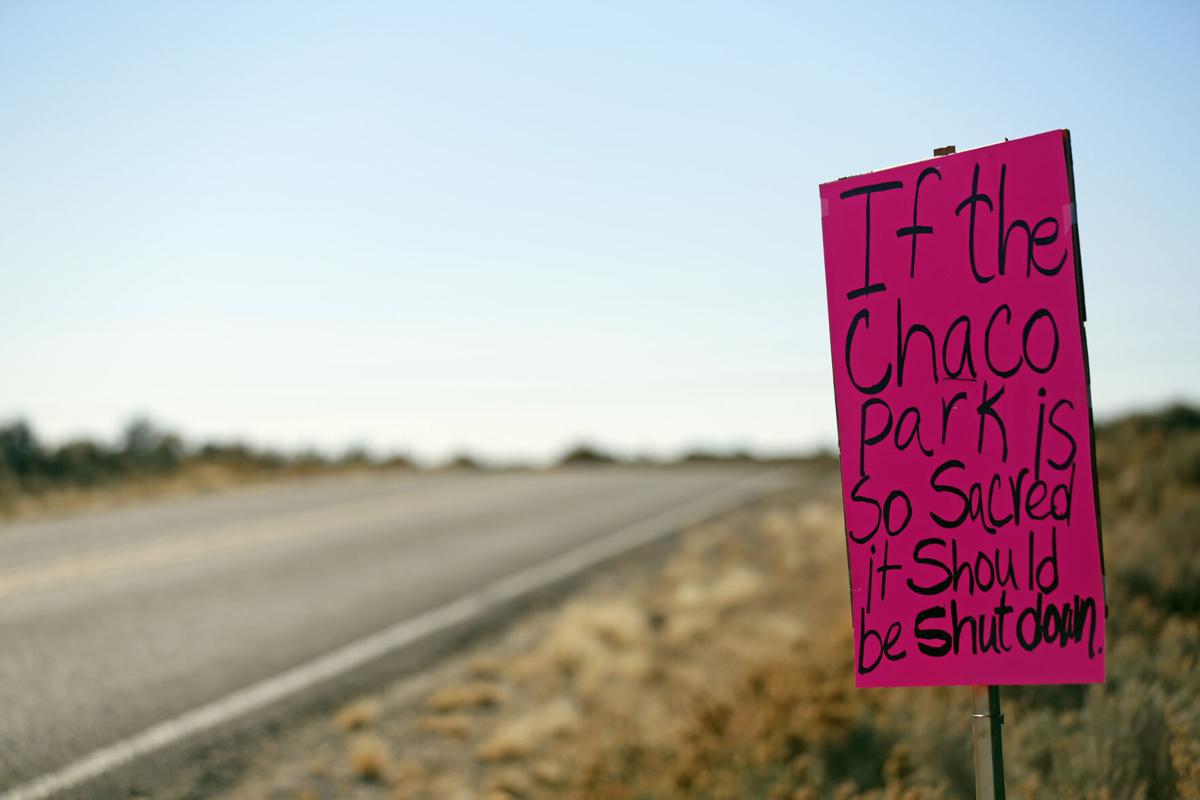 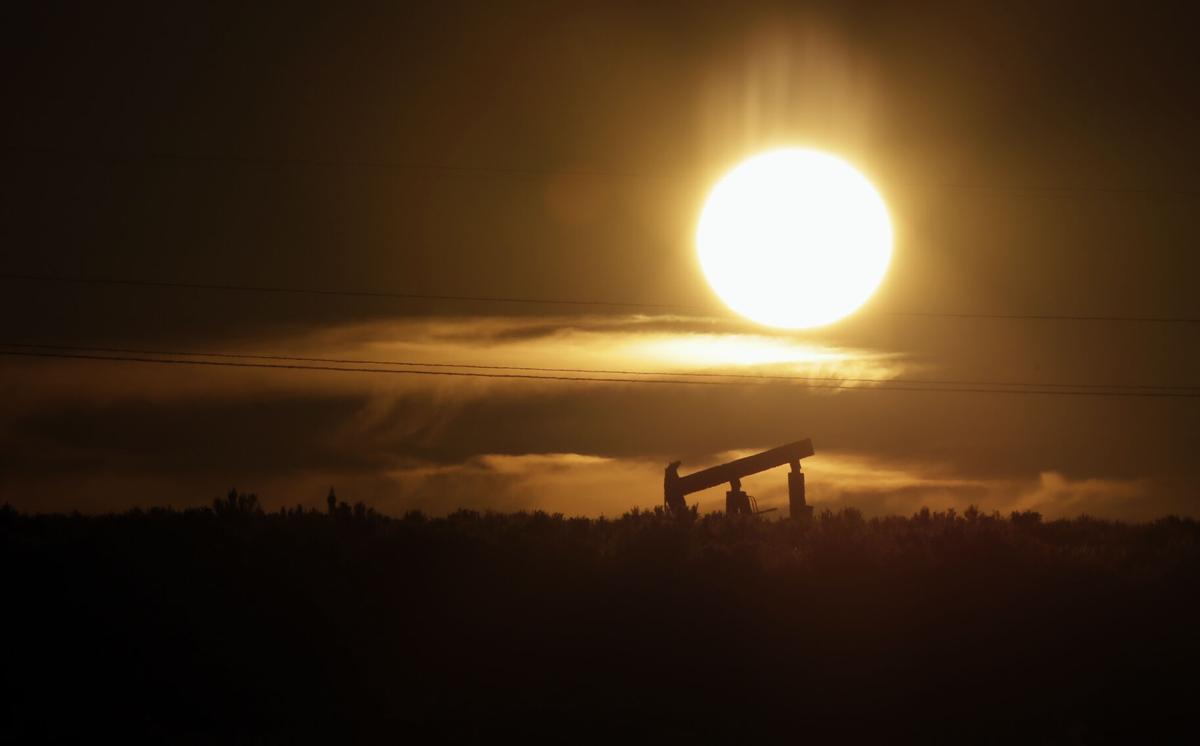 A pump jack in the sunset near Chaco Culture National Historical Park on Monday.

Two visitors stand next to a kiva at Pueblo Bonito at Chaco Culture National Historical Park on Monday.

Haaland, a Laguna Pueblo member, offered words of appreciation for having the chance to safeguard a region she holds close to her heart.

“This is a living landscape,” Haaland said. “You can feel it in the sun, the clouds and the wind. When I look at the sky and the mesas, I’m grateful that the pueblos and the Navajo Nation and all the communities can share this landscape together.”

Tribal leaders said they were thankful fossil fuel activity might be halted on federal lands within that zone for up to 20 years. Thankful that federal leaders are finally listening to them and considering their concerns. Thankful an area embedded deeply in their history and culture — which they deem sacred — stands a strong chance of being preserved.

“For many, many years, a chorus of pueblos and tribes have called for greater protections for Chaco Canyon and the greater Chaco region,” Acoma Pueblo Gov. Brian Vallo said. “Our right to protect the sacred place is rooted in what our elders teach us and what we know as descendants of those who settled here.”

Vallo and others said Chaco was a nexus for the various tribes, which is why it is special to them. They said it is crucial to preserve it for the generations to come.

“That is our sacred covenant, to those yet to be born,” Vallo said.

Absent were opponents of the effort to create the 10-mile zone and make federal oil and gas leasing off limits for 20 years within the buffer. They include industry operators and some Navajo leaders who say curtailing oil and gas so sharply in the region will choke off a resource for a people struggling with poverty and unemployment.

Some Navajo landowners who drill for oil on their parcels, known as allottees, oppose the restrictions, though the limits wouldn’t apply directly to their land. They worry that having no-drill federal parcels wedged against theirs could lower their property values.

In an email, the spokesman for the New Mexico Oil & Gas Association said he’d like to see Haaland break off from her supporters and talk to other folks.

“We hope the secretary will dedicate some of her time in New Mexico to engaging with the local stakeholders and community members who stand to be impacted the most by this policy,” spokesman Robert McEntyre wrote. “We are confident that we can protect Chaco for future generations while at the same time safely and responsibly developing energy resources as we’ve done in this region for over 100 years.”

However, most speakers at the event said the no-development zone was needed to ensure the environment, people’s health and the cultural history are safeguarded.

Among them was Daniel Tso, a Navajo Nation Council delegate who chairs its Health, Education and Human Services Committee.

Tso noted he was the only Navajo Council delegate present. He also said he was an allottee who backs the proposed restrictions.

“We want the landscape protected, we want better air quality for the area, we want to protect the water aquifer,” Tso said. “The undisturbed landscape holds much sacredness. It brings peace of mind. And it’s a good spiritual strength.”

U.S. Rep. Teresa Leger Fernandez, a Democrat whose district includes the area, said she is working with Sen. Ben Ray Luján and other delegates to create a new version of the Chaco protection bill.

“We will need this bill to make sure the protections contemplated today are durable and cannot be undone by any future administration,” Leger Fernandez said.

Haaland said they should model their stewardship of Chaco after their Native ancestors, who used water wisely and cultivated their food sustainably, knowing there is only one planet.

The “power of Chaco” extends beyond the park’s boundaries and even the 10-mile zone being proposed, she said. The Interior Department is exploring a broader protection plan and will seek public comment in the coming months, she added.

“I’m calling the process ‘Honoring Chaco’ because that’s our obligation to each other and to the future,” she said.

Many places in the Four Corners area like Chaco also speak to the power of nature, and of the changes that the people faced when water became scarce. That lesson, like those articulated by the speakers at yesterday's ceremony about traditions, is worth remembering as well.

Too small and area, to temporary, why didn't she do the right thing and buy up all the minerals rights and retire them from leasing in perpetuity within 100 miles. Chump change required to do that compared to the BBB bill spending explosions, why not do it now?

THANK YOU MADAM SECRETARY FOR LISTENING TO YOUR HEART AND FOLLOWING UP ON YOUR COMMITMENT TO INCLUDE MOTHER NATURE IN YOUR DELIBERATIONS. GOD BLESS