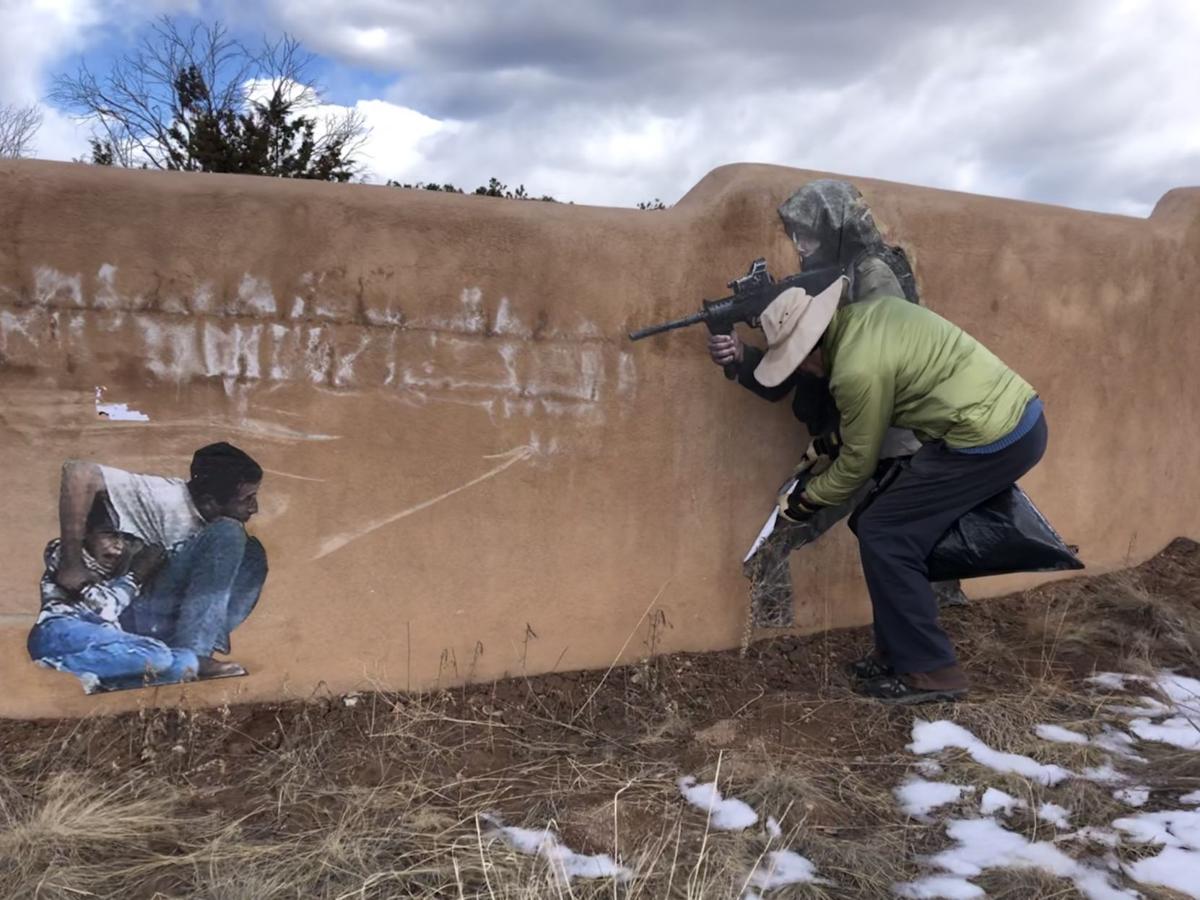 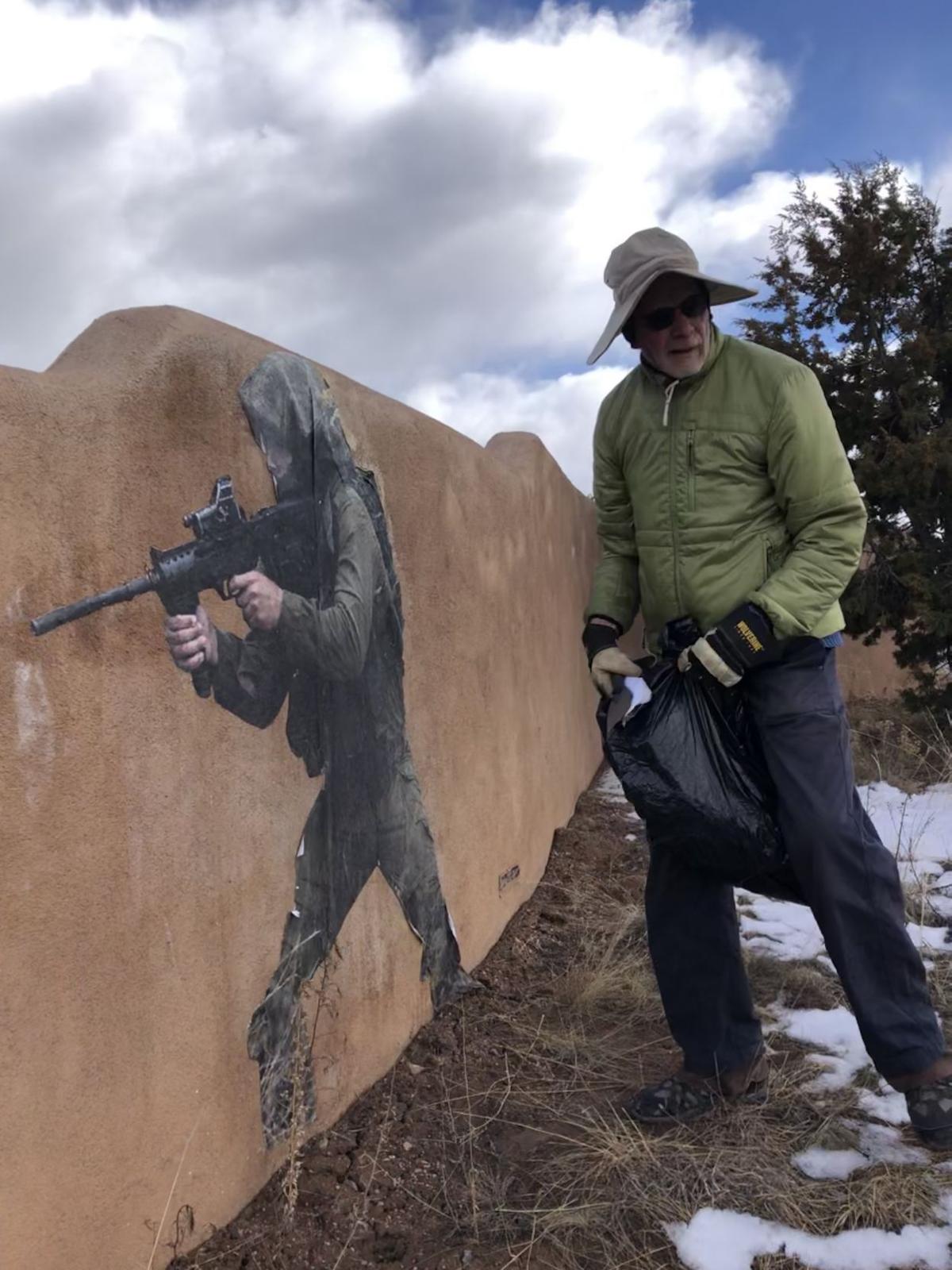 The Israeli-Palestinian conflict spilled into City Hall on Tuesday over a series of graphic images on a publicly visible stucco wall in one of Santa Fe’s highly protected historic districts.

The issue wasn’t meant to be about the content of the artwork, some of which depicts armed Israeli soldiers threatening Palestinian children at gunpoint, though the politicization of the wall sparked controversy and the stark images were labeled as vulgar and anti-Semitic by Jewish leaders in Santa Fe and New Mexico.

At issue was whether applying the artwork on papier-mâché to a stuccoed exterior yard wall at the corner of Old Pecos Trail and Camino Lejo in the historic district was “inconsistent” with design standards and “inharmonious” with the district’s outward appearance.

After a nearly 2½-hour hearing that turned rowdy at times, the city Historic Districts Review Board found the art didn’t comply with design standards and upheld a decision by the land use director ordering property owner Guthrie Miller to take the artwork down. Miller may challenge the board’s decision in District Court.

Four of the six people currently on the seven-seat board were at the meeting. They voted 3-1 to affirm the land use director’s decision, with Anthony Guida casting the dissenting vote.

“The director’s decision was based on a determination that the artwork does not comply with the architectural design standards that apply in the historic review district as set forth in the city code,” Assistant City Attorney Sally Paez told the board at the beginning of the hearing, which drew dozens of people. “Specifically, the ordinance requires that publicly visible exterior walls in this district must be built of brick, adobe, rock, masonry, wood, coyote fencing, wrought iron, slump block or similar materials and dictates that stucco buildings shall be predominantly brown, tan or local earth tones.”

The meeting, which a Santa Fe police officer monitored from the back of the council chambers, saying he was asked to be there in case it became “contentious,” got off to a combative start.

“The attorney’s advice is that we cannot consider the constitutional issue [under the First Amendment], and I understand that’s basically based on our code, [which] gives us specific authority,” Chairman Frank Katz said before he was interrupted by an audience member.

It wasn’t always, with proponents of the artwork at times making snide remarks and booing.

The public hearing drew more than two dozen speakers on opposite sides of the issue.

Brian Yapko, an attorney who moved to Santa Fe with his husband, Jerry, from the Pacific Northwest 18 months ago, said they were drawn to Santa Fe because it seemed like a city that was “peaceable, historic and invested in upholding the law.”

“When we first saw the mural on Old Pecos Trail, the clean, grand entrance into Santa Fe, we were quite disturbed,” he said. “Ignoring the mural’s content, let me say this: We were upset that the beauty and integrity of Santa Fe’s historic district had been violated, and we were disturbed that the artist or homeowner had felt privileged to put himself above the law by failing to comply with basic permit requirements before the mural went up.”

Like Yapko, several other speakers opposed to the murals said they had moved to the city from out of state, which drew the ire of native Santa Fean Raymond Herrera.

Herrera said he fought to protect a huge mural by Chicano artist Gilberto Guzman and others that is being destroyed to make way for the Vladem Contemporary art museum.

“It really upsets me that some outsider can come into Santa Fe and put in $2 million bucks and buy a building and have a beautiful historic mural destroyed. That’s what the mentality of Santa Fe is becoming,” he said. “With this mural, it comes down to the issue of, ‘Not in my neighborhood.’ You know, dang it, get off it. No one asked you to come here, and if you’re going to come here and insist that we bow down to you, get the hell out of here!”

Several speakers, as well as city staff, said the contentious issue raised larger questions about murals and public art in Santa Fe and that it merited input from the City Council.

“I hope that it will continue to inform the city’s decisions related to public art and murals,” board member Jennifer Biedscheid said. “With respect to the code, which is the only thing I can control at this point in my role on the board, the historic review district does not provide specific guidance to permit murals, and in the absence of specific language on murals … we must rely on the architectural standards that do exist. I do think it sort of boils down to the materials that are used in this case.”

Hours before the Historic Districts Review Board meeting, Miller used what appeared to be a putty knife to remove portions of the murals that were flaking off and conceded that all but one that was put up recently had reached the end of their life cycle. Still, Miller said he was pursuing the appeal largely on principle.

“The larger issue is having mural art in this part of Santa Fe, and I would like to have the freedom to do that,” he said. “As the owner of the property, I should be able to display art on my wall, and the content would be protected by the First Amendment, right?”

In his appeal, Miller called the city’s refusal to allow him to keep the artwork on his wall a “violation of his property rights, his First Amendment rights of public expression and free speech, the right not to have his art discriminated against and censored because of its content, and his right to participate in the rich art heritage and messaging through art in Santa Fe.”

In Tuesday’s interview, Miller said few people have complained about the artwork, which was created by a Navajo artist who goes by the name Remy. Miller, a retired Los Alamos National Laboratory employee, has allowed other pro-Palestinian artwork to be displayed on his property in the past.

“I haven’t really received input from the neighborhood,” he said. “I mean, not to say that just one person could veto it, but if there’s a general consensus that this is objectionable, I would be very sensitive to that.”

"“Authority isn’t given to you on stolen land!” Native American activist Elena Ortiz yelled, generating a few gasps." Seriously??? My ancestors worked hard and fought hard to civilize this land and make it productive and useful. They fought and died to earn this land, it was not "stolen" by any stretch of even the most radical imagination.

If Mr. Miller likes it so much have the artist repaint it on side facing his house.

Is this s0-called freedom of speech/artwork causing harm, simply contentious, or in any ways helpful in raising awareness for our entire community? Given the overall negative reaction of our community at large, I feel that the owner could best put his agendas aside and keep this particular (frightening images of any and all war scenes, imo) on the inside walls of his property - out of respect.

One key question not addressed in this article--or apparently in all the emotional discussions--is whether or not this property is actually IN a historic district. It appears to me to be on a border of a transition district and possibly not actually in the protected historic district. I wonder if the property owner ever challenged the finding.

Ms. Harrelson, Thank you for posing the question. The property is on the edge of the Historic Review District, but it does in fact fall within the boundaries, according to a map of the district. -- Daniel

Plato admonishes in the Laws that the tyrant writes his edict on a wall.

In the Republic he tells us that, "when wealth and the rich are honored in the state, virtue and the good are less valued". The battle for expression in Santa Fe is being waged at the expense of our polity. One one hand the mural on Old Pecos Trail is taking a stand, yet may evoke an anarchic message. The mural on the Halpin building represents community not anarchy. The treatment of the Halpin building and its mural, however, is a sign that the people do not have a voice, nor may we preserve historic buildings in order to honor our heritage. Study the Antiquities Act, and The National Historic Preservation Act.

Indeed, as Mr. Neal suggests, perhaps a separate mural down the street of a Hamas terrorist running onto a passenger filled bus with an explosive filled vest. No equivalence here except in the futility of solving that area's problems with another century of violence, be it with tanks or suicide vests.

The property owner is obviously anti Israel--and this is not correct. Period!

We need a local version of England's Banksy.

Perhaps someone should plaster a mural on a wall, of say, a Palestinian Hamas terrorist knifing a couple of Israeli kids on a schoolbus....you know, for a little "balance".

It is time to start fining this guy for his blatant disregard of the law. If this guy was allowed to keep the art, what is to stop other people from putting offensive "art" on their walls?