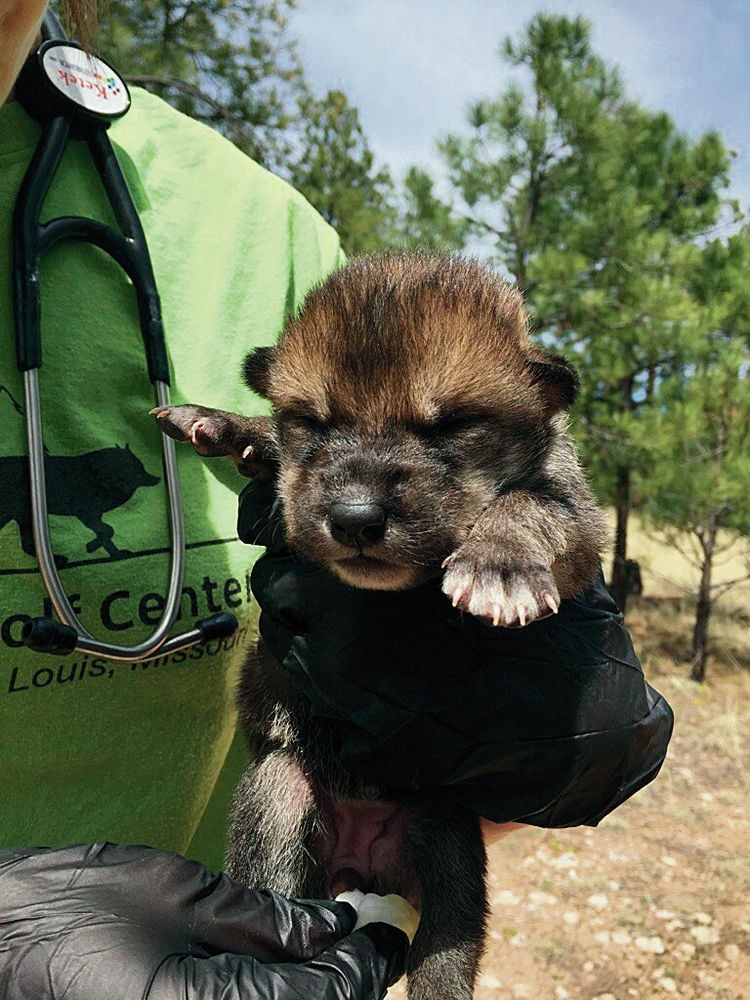 The U.S. Fish and Wildlife Service proceeded with the release of two 9-day old Mexican wolf pups in New Mexico last Saturday, a move strongly opposed by the state, which said the agency acted against state law by introducing the pups without a state permit. Courtesy Endangered Wolf Center 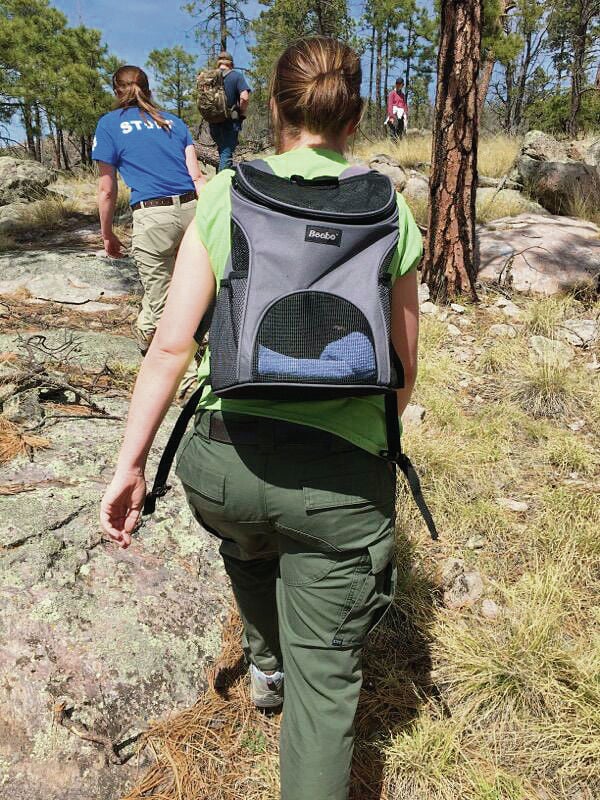 Regina Mossotti, director of Animal Care and Conservation for the Endangered Wolf Center, carries the two wolf pups in a backpack as they hiked into the New Mexico wilderness, where they hope to integrate the pups with the new litter of an existing wolf pack. Courtesy Endangered Wolf Center 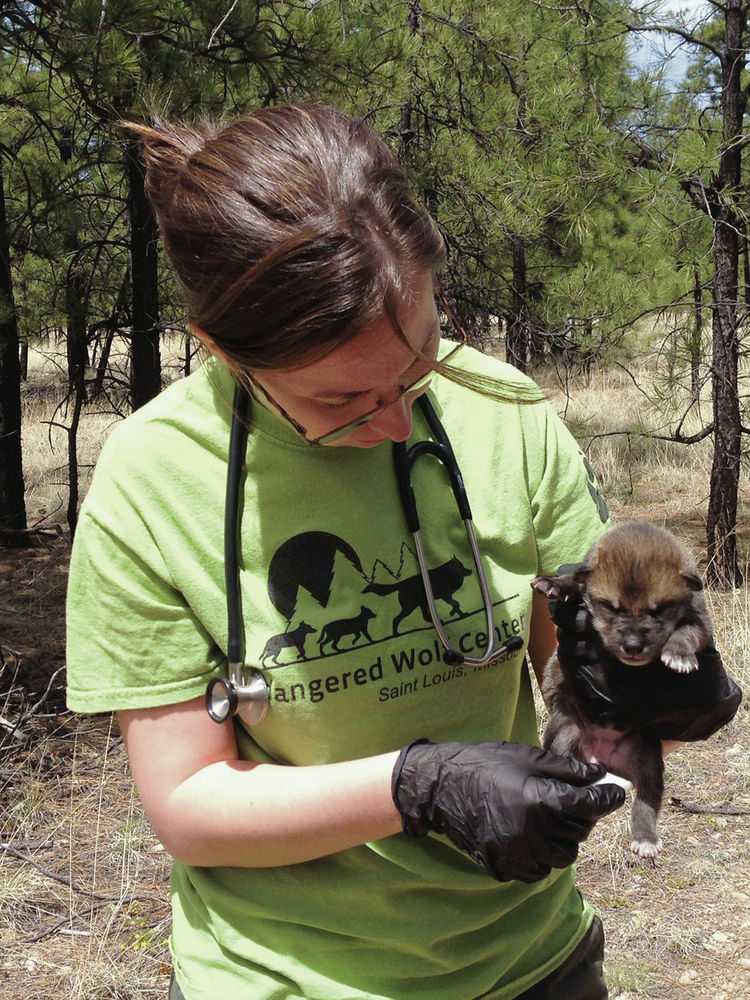 Regina Mossotti, director of Animal Care and Conservation for the Endangered Wolf Center, holds a 9-day old male Mexican wolf pup that was bred in captivity in Missouri and then cross-fostered with a Mexican wolf pack in New Mexico last Saturday with the help of the U.S. Fish and Wildlife Service, as part of an effort to recover the endangered species. Courtesy Endangered Wolf Center

The area of wilderness near the New Mexico and Arizona border in Catron County where the Mexican wolf pups were released into an existing Mexican wolf den. Courtesy Endangered Wolf Center

The U.S. Fish and Wildlife Service proceeded with the release of two 9-day old Mexican wolf pups in New Mexico last Saturday, a move strongly opposed by the state, which said the agency acted against state law by introducing the pups without a state permit. Courtesy Endangered Wolf Center

Regina Mossotti, director of Animal Care and Conservation for the Endangered Wolf Center, carries the two wolf pups in a backpack as they hiked into the New Mexico wilderness, where they hope to integrate the pups with the new litter of an existing wolf pack. Courtesy Endangered Wolf Center

Regina Mossotti, director of Animal Care and Conservation for the Endangered Wolf Center, holds a 9-day old male Mexican wolf pup that was bred in captivity in Missouri and then cross-fostered with a Mexican wolf pack in New Mexico last Saturday with the help of the U.S. Fish and Wildlife Service, as part of an effort to recover the endangered species. Courtesy Endangered Wolf Center

The federal government says the introduction of the young Mexican wolves into the New Mexican landscape is essential in recovering the endangered species, and something they are legally bound to do under the Endangered Species Act. But the New Mexican Game and Fish Department blasted the agency over the April 23 release of the pups, saying Friday that the management of wildlife falls under the state’s jurisdiction.

The state agency said the Fish and Wildlife Service’s actions show a disregard for New Mexico law and may harm wildlife management throughout the state.

“The U.S. Fish and Wildlife Service blatantly disregarded states’ rights when they released Mexican wolves into New Mexico without obtaining the necessary state permits,” said Lance Cherry, a spokesman for the Game and Fish Department. “It is imperative that the New Mexico Department of Game and Fish remain the primary authority in all matters involving wildlife management in New Mexico for the benefit and best interest of our citizens.”

Cherry said the department is currently evaluating the event and “weighing our options at this time.”

The release occurred just days before the Fish and Wildlife Service settled a lawsuit by agreeing to create an updated wolf management plan for the region by 2017 and closely follows an announcement by the agency that it would begin releasing wolves this summer to increase the species’ population in New Mexico and Arizona, and to boost the genetic variation of the wolves within both states.

In response, the New Mexico Game and Fish Department said it would take legal action to prevent the wolf releases.

The Fish and Wildlife plan includes the introduction of adult Mexican gray wolves into the wild in New Mexico and Arizona, along with cross-fostering — placing captive-born wolf pups into a den with a wild litter. Ideally, the wolf mother will adopt the new additions as her own pups.

The cross-fostering exchange that occurred this month was, in fact, the first time that captive Mexican wolf pups were introduced to a wild litter, according to Regina Mossotti, director of animal care and conservation for the St. Louis-based Endangered Wolf Center, which partnered with Fish and Wildlife in the pups’ release.

“Not only do the stars have to align, but the stars, the sun and the moon,” she said. “The pups in the wild and captivity have to be born within a few days [of each other].”

Mossotti said the center has attempted to do this type of release for years, but accomplishing it requires a precarious balance of coordinating births, transportation and weather, locating the wild den and having the adult wolves accept the foreign pups.

Maggie Dwire, a coordinator for the Fish and Wildlife Service’s Mexican Wolf Recovery Program, said these efforts were in line with the recovery plan for the species released April 18. The impact the young wolves would have in New Mexico was assessed as part of a 2014 environmental impact statement, she said.

Catron County and people with grazing permits within a 10-mile radius of the release were notified before the event, she said.

“The intent is for these newly released pups to be raised in the wild by experienced wolves and ultimately contribute to the gene diversity of the wild population by becoming successful breeding adults,” she said in a statement.

But Catron County has consistently objected to the presence of wolves, and residents are involved in a lawsuit challenging the range area that the federal government has designated for releases.

In 2012, the Southwest Center for Resource Analysis submitted a study to the county and to the state Game and Fish Department that examined the wolves’ effect on ranching. It found that the presence of Mexican wolves in the region might be reducing young cow populations by 15 percent — or an estimated 1,172 calves per year. The study says a larger wolf population in the area could more than triple those losses. It also notes that cattle ranching in the area brings in more than $4 million annually.

She said wolves have followed children home from school, killed household pets and slaughtered livestock. One member of the Cattle Growers’ Association lost $50,000 last year from livestock killed by wolves, she said, and the rancher was reimbursed just $5,000.

Cowan recalled sitting at a Fish and Wildlife meeting in 2014 when a plan for the wolves was discussed: “They said, ‘no populations of concern were impacted by the wolves.’ ”

“When somebody tells you you don’t matter, how do you respond to that?” she asked.

She said she hopes the state Game and Fish Department will take action against the federal agency, saying that Game and Fish officials “are representing the people of New Mexico.”

But Bryan Bird, a wolf advocate and Southwest director for the environmental group Defenders of Wildlife, said the Game and Fish Department has not represented New Mexicans, who he says overwhelmingly support the recovery of endangered wolves. He cited a poll conducted by Tulchin Research that found 72 percent of Arizona voters and 69 percent of New Mexicans favored restoring Mexican gray wolf habitats in both states.

In 2015, the Fish and Wildlife Service twice proposed the release of Mexican wolves in New Mexico, and the State Game Commission denied the permits, citing a lack of science to support the impact wolves would have on the local ecosystem, and an outdated federal management plan.

Earlier this week, the agency agreed in a settlement with states and environmental groups to release a new wolf management plan by November 2017.

“The state is playing politics with this important animal,” Bird said. “Unfortunately, the cross-fostering is not going to be enough to save the wolves in the wild. They need to introduce adult wolves,” as well.

To integrate the pups last week, a biologist and veterinarian carried them the last half-mile to the wild den, where their presence caused the grown wolves to scatter, leaving five young pups unattended. The biologists entered the den and rubbed the St. Louis pups with urine and other scents so they would smell like the wild pups.

They won’t know until later this summer, when the wolves are again surveyed, if the wild pack has adopted the captive pups. But after the biologists departed, the adult wolves returned to the litter, their movements tracked through GPS collars. Mossotti said this is the first sign that the mother will accept the pups and raise them as her own.

“We deal with a lot of negativity surrounding this animal. It is a controversial species, to say the least,” she said. “You have grown up with everything from Little Red Riding Hood to the Three Little Pigs to Frozen.”

But Mossotti said the media portrayal of wolves is mischaracterized. They are shy animals, she said, who tend to cower or flee from humans.

“We want to maintain that natural shyness so when they go out into the wild, they stay away from people,” she said. “Not because they are dangerous, but because we are.”

A settlement announced Tuesday between the U.S. Fish and Wildlife Service and several enviro…

Our View: Will the wolf survive?

New Mexico to sue feds over release of wolves

The state Department of Game and Fish says the federal agency is proceeding in violation of New Mexico law.

The State Game Commission on Friday approved the transfer of five Mexican gray wolves from Washington state to Ted Turner’s Ladder Ranch in Southern New Mexico, an action that activists say represents a shift in the commission’s policy.