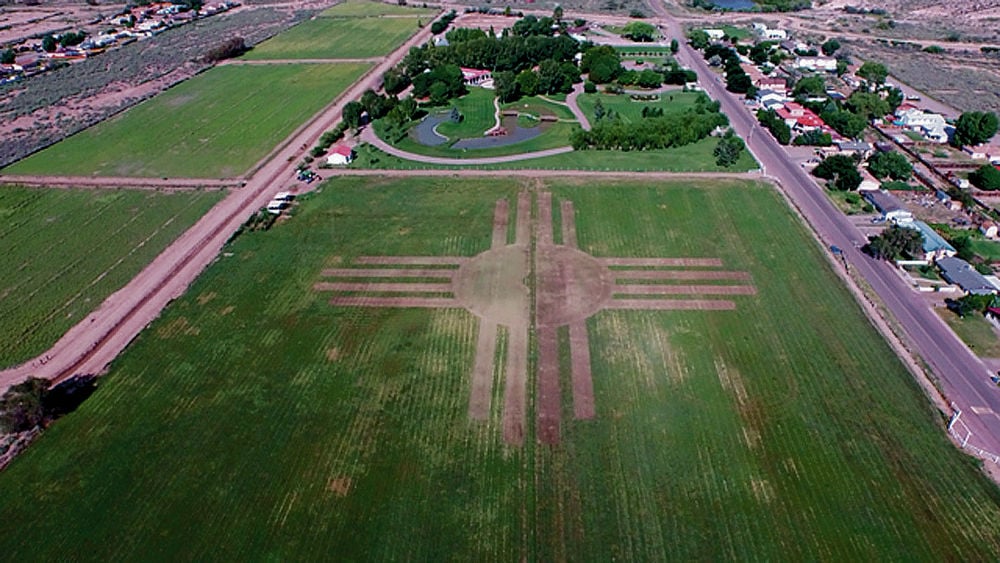 House Speaker Don Tripp’s son-in-law, Lonnie Gonzales, mowed a 450-foot by 450-foot zia symbol that will serve as the landing target in a 20-acre field at Tripp’s home near Socorro for a skydiving fundraiser by Gov. Susana Martinez and her husband, Chuck Franco. Courtesy photo 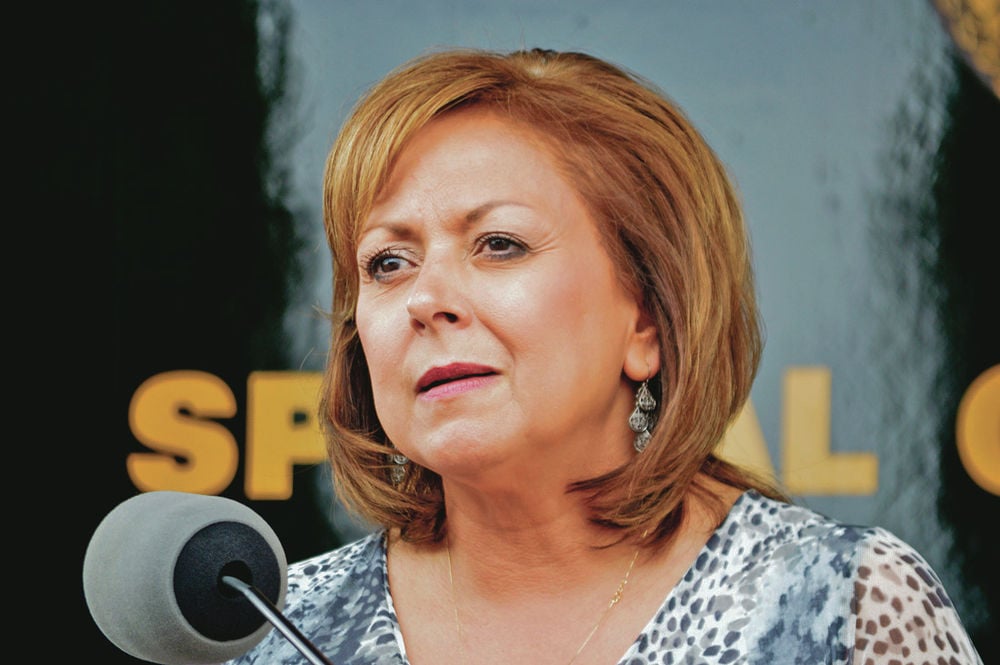 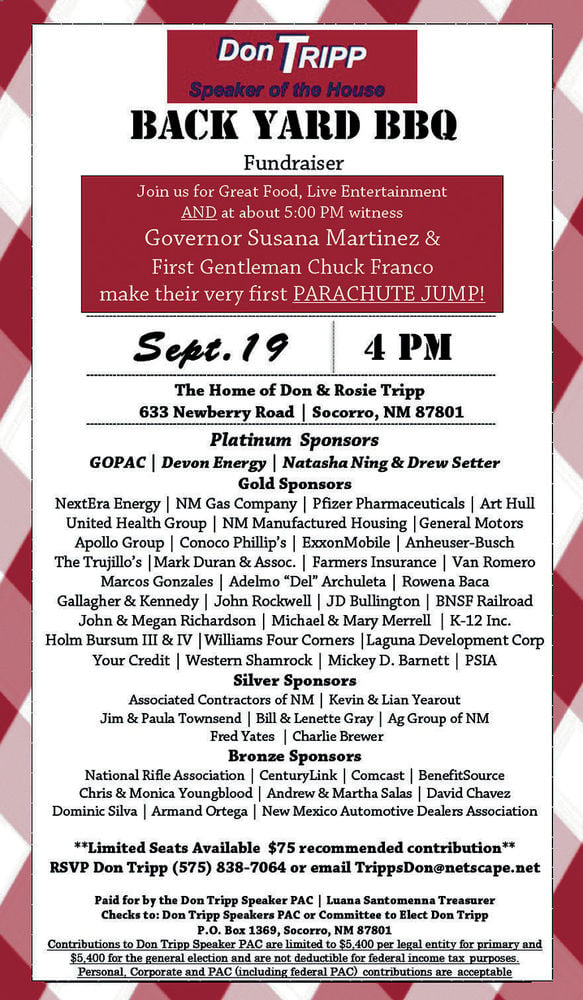 An invitation sent out for a Republican fundraiser and backyard barbecue at House Speaker Don Tripp’s Socorro residence. Courtesy image

House Speaker Don Tripp’s son-in-law, Lonnie Gonzales, mowed a 450-foot by 450-foot zia symbol that will serve as the landing target in a 20-acre field at Tripp’s home near Socorro for a skydiving fundraiser by Gov. Susana Martinez and her husband, Chuck Franco. Courtesy photo

An invitation sent out for a Republican fundraiser and backyard barbecue at House Speaker Don Tripp’s Socorro residence. Courtesy image

At least for the short term, Republican Gov. Susana Martinez’s future is up in the air.

Martinez and her husband, Chuck Franco, plan to parachute Saturday at 10,500 feet from a Cessna airplane for a crowd of corporate donors during a fundraiser near Socorro for Republican House Speaker Don Tripp at his home.

“She’s going to do a little skydive into the field at my house,” Tripp said in a phone interview Thursday.

Tripp’s son-in-law, Lonnie Gonzales, mowed a 450-foot by 450-foot zia symbol that will serve as the landing target in a 20-acre field.

An invitation sent to Republican House members says the fundraiser will offer food, entertainment and the first-ever leap from a plane by Martinez and Franco.

Gonzales, a board member of the nonprofit Skydive New Mexico, said the idea came about during a fundraiser last year at Tripp’s home. Skydivers from the club jumped from a plane with an American flag.

“She kind of struck up a good conversation with them and she said, ‘I’d love to try that,’ ” Tripp said of Martinez.

This led to a challenge of sorts. “We kind of called her on it, and she said, ‘I’ll do it. So will Chuck,’ ” Gonzales said. “And we’ll throw both of ‘em out of an airplane.”

Nearly 50 corporations, lobbyists and individuals are listed as sponsors of the fundraiser, which will help in the Republican effort during the 2016 elections to maintain control of the state House. The GOP last year won a majority in the House for the first time since 1954. Republicans have a 37-33 advantage over Democrats.

Tripp said about 100 people will attend Saturday’s event. The invitation lists the suggested contribution as $75.

According to the invitation, so-called platinum sponsors include GOPAC, a political group dedicated to electing Republicans in offices across the nation; Devon Energy, an oil and gas company that operates in New Mexico; and lobbyists Natasha Ning and Drew Setter.

Ning and Setter earlier this year faced allegations from Republicans that they worked from the Capitol office of Tripp’s predecessor as speaker of the House, Democrat Kenny Martinez of Grants. Rep. Martinez said no impropriety occurred with the two lobbyists, who now are committed to watch another Martinez in the rival party leap from a plane.

Gold sponsors for Tripp’s fundraiser include United Healthcare Group, one of the companies that administers Medicaid cash to fulfill one of the state’s most lucrative contracts; lawyer Mickey Barnett, who has lobbied for United Healthcare and the payday lending industry; BNSF Railway; Pfizer Inc; and K-12 Inc., a national corporation that operates virtual schools in the state.

Like last year, Skydive New Mexico members will jump out of airplanes with American flags to “add some patriotism to the event,” Tripp said.

The plane belongs to a member of Skydive New Mexico who died recently, Gonzales said. Tripp said the organization will supply the airplane as an in-kind contribution to his political action committee, and Tripp will pay for the fuel.

The governor’s itinerary is set, too. “Her husband will jump first,” Gonzales said.

May I please be on the quality control and safety team for the parachutes? I don’t have any qualifications nor have I ever done this type of work before, but I want our governor to make the entrance she deserves.

(Chuck could always get a job with the Flying Elvises).

The article quotes her as volunteering ol’ Chuck. Bet that went over like a ton of bricks when she got home and told him what he was going to do. But then again, he’s probably used to asking her “How high?”

Wish she was taking Skandy with her instead.

Hopen there aren't any duck hunters in the area. Wait! What am I thinking?

Isn't it bliss?
Don't you approve?
One who keeps tearing around,
One who can't move...
Where are the clowns?
Send in the clowns.

Republican politics this year. What a circus.

Why would anybody jump out of a perferctly good airplane?