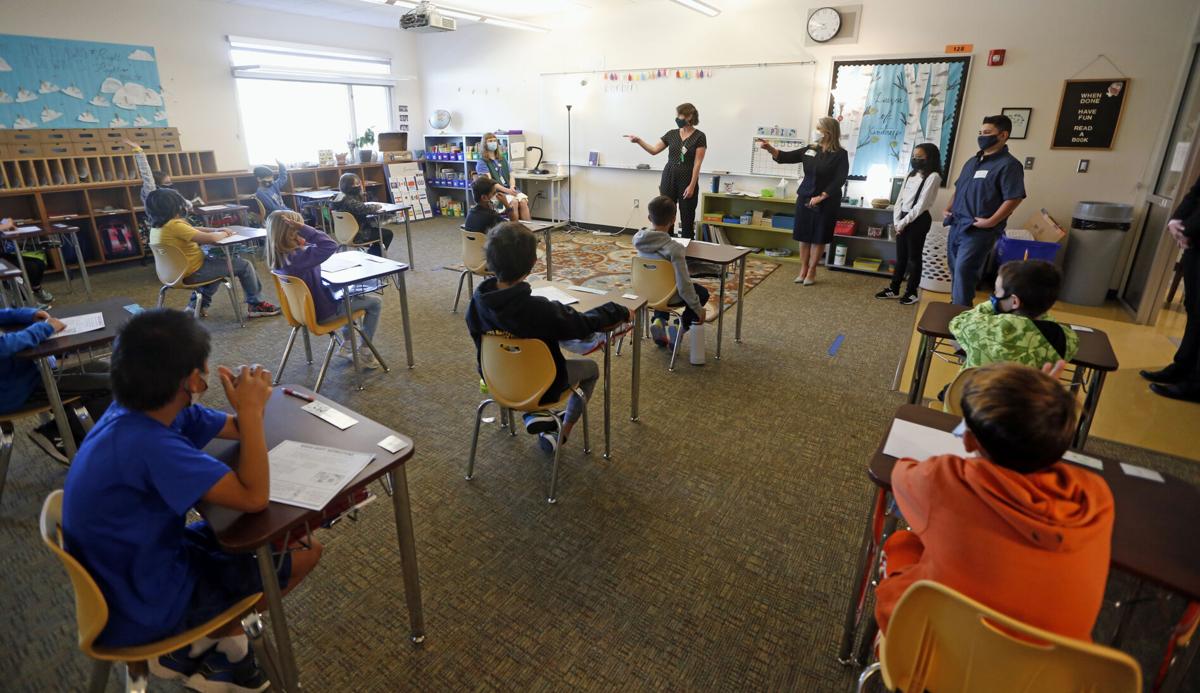 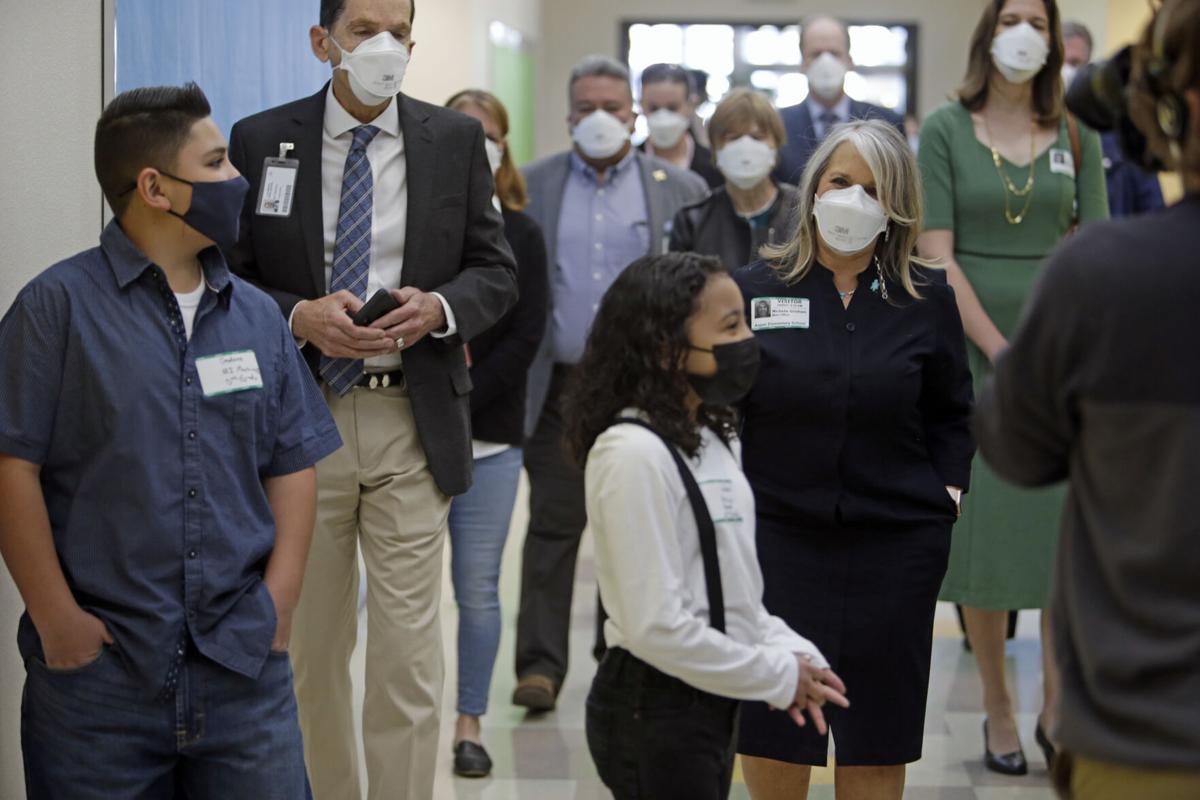 MJ Martinez, 11, left, and Analise Natal, 11, give Gov. Michelle Lujan Grisham a tour Monday of Aspen Elementary School in Los Alamos. Some changes for the return amid the pandemic: outdoor classes and an isolation tent for students who don’t feel well. 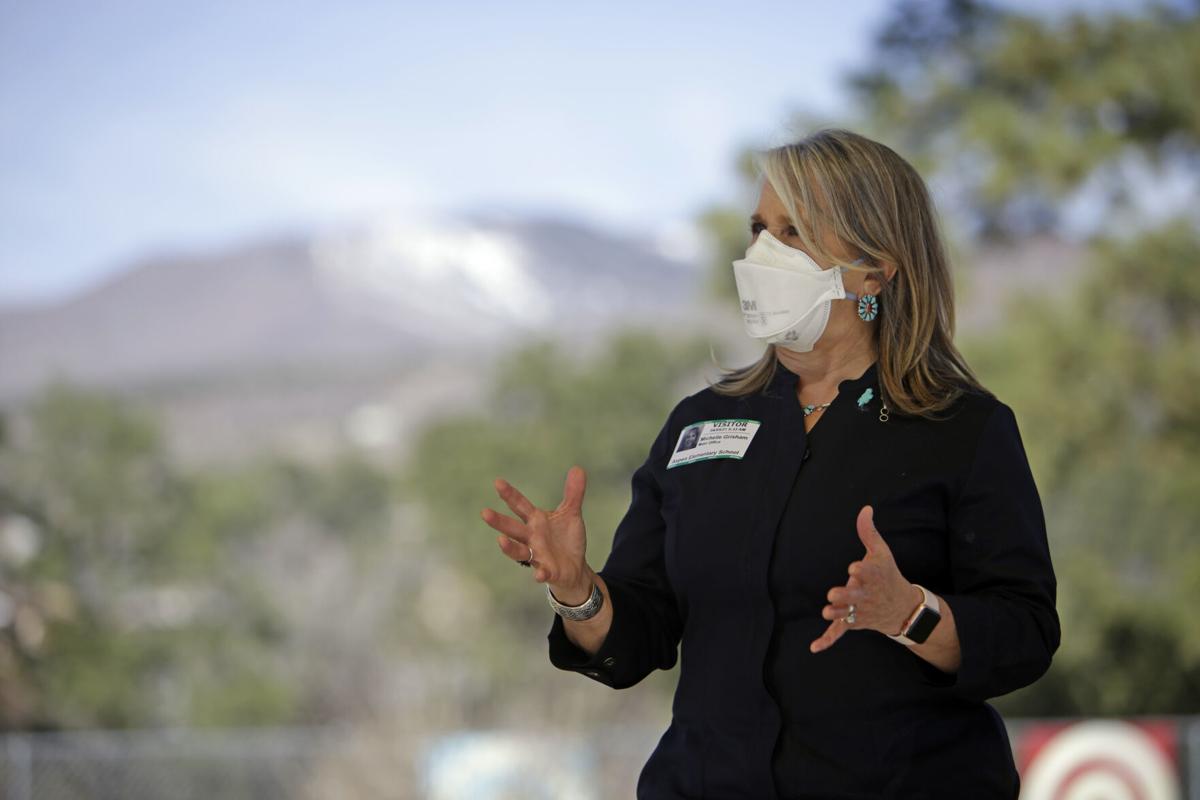 MJ Martinez, 11, left, and Analise Natal, 11, give Gov. Michelle Lujan Grisham a tour Monday of Aspen Elementary School in Los Alamos. Some changes for the return amid the pandemic: outdoor classes and an isolation tent for students who don’t feel well.

LOS ALAMOS — As far as Stacy Martens and her class of second graders were concerned, Monday was the first day of the school year.

Aspen Elementary School in Los Alamos was ready for its pandemic-era return. Not only was there an isolation tent set up in the hallway outside the administrative offices for students who were feeling ill, but someone had mounted a huge visual arts display on a hallway wall, featuring a big, blue protective mask.

Plus, a “celebrity” — as one of those second graders put it — was coming to see them: Gov. Michelle Lujan Grisham.

“It’s exciting — and scary,” said one of the kids in the class.

The governor took a short tour of the school — including Martens’ outdoor classroom — telling the students she encountered she wanted to welcome them back.

Humor, joy and a palpable sense of exuberance filled the hallways of the school, which has about 300 students, Monday morning.

And why not? After a year-plus of remote learning, some in-person learning and a hybrid of the two, everyone — staff, students, the district’s superintendent and even the governor — all seemed happy to have the school fully open again.

The kindergartners showed off their protective masks with pride, as if they were comparing classic lunchboxes. The second graders pointed at a line of sixth graders moving down the hallway and waved hello, as if greeting long-lost mentors and friends.

Martens ran a writing class outside under a protective covering, her students separated from her and one another by about 6 feet.

“It feels great for all of us to be back,” Martens said. “It’s the first day of school — in April.”

The coronavirus pandemic, which swept into New Mexico in March 2020, led to a closure of schools shortly thereafter.

In recent months, some called on Lujan Grisham to reopen schools to get students back into environments that will help them learn and place them again among friends who provide social and emotional comfort.

Last month, Public Education Secretary Ryan Stewart said the state would fully reopen school campuses this week. Stewart said at that time the decision was due in part to the then-new vaccination process for teachers and staff members.

The governor on Monday defended her decision to wait until the number of New Mexicans getting vaccinated increased while COVID-19 cases decreased.

“I wouldn’t have done anything different,” she said.

She added getting kids back to school allows their families to get back to a sense of normalcy, and she listened to the input of educators, school board members and teachers’ union leaders before sending kids back full time.

“I think we did it right,” Lujan Grisham said.

One concern raised by many is that New Mexico students may be falling behind amid the challenge of learning from home by computer, without a nearby source of support from teachers and other students.

A March report by researchers at Stanford Graduate School of Education said reading fluency — the ability to read accurately aloud — among second and third graders fell by about 30 percent in the past year.

Lujan Grisham said the loss in learning makes it “clear there are areas where we have to double down with our efforts.”

Los Alamos Public Schools Superintendent Kurt Steinhaus said an internal study of reading and math comprehension among students, which he presented to the school board Sunday, showed students were holding their own with reading.

As for math proficiency, “there’s lots of room for improvement,” he said.

He said the district is planning K-8 schooling through June comprising morning lessons in core academic subjects and afternoon sessions in the arts. While the program is optional, he expects 65 percent of the district’s eligible students to take part. He said he was expecting between 95 and 99 percent of his district’s students to return to school this week. They miss that human connection, he said — not just with their teachers and other staff members but with other students.

Analise Natal, one of the governor’s Aspen Elementary tour guides, said she missed that part about the classroom.

“The best thing about being back in school is seeing my friends again,” she said. Being back to school in person “is definitely a big change for me. I’ve been standing in front of a computer screen [to learn] the whole time.”

Lujan Grisham, Steinhaus and Martens all spoke of how the pandemic has highlighted the importance of the brick-and-mortar public school system in providing a social and emotional fabric of well-being.

Martens said seeing the kids and her colleagues back at school gave her a sense of hope.

“It feels light,” she said.

As she watched her second graders walk outside, single file, to recess, she said, “It’s a school family, and you need to be present to participate in that family.”