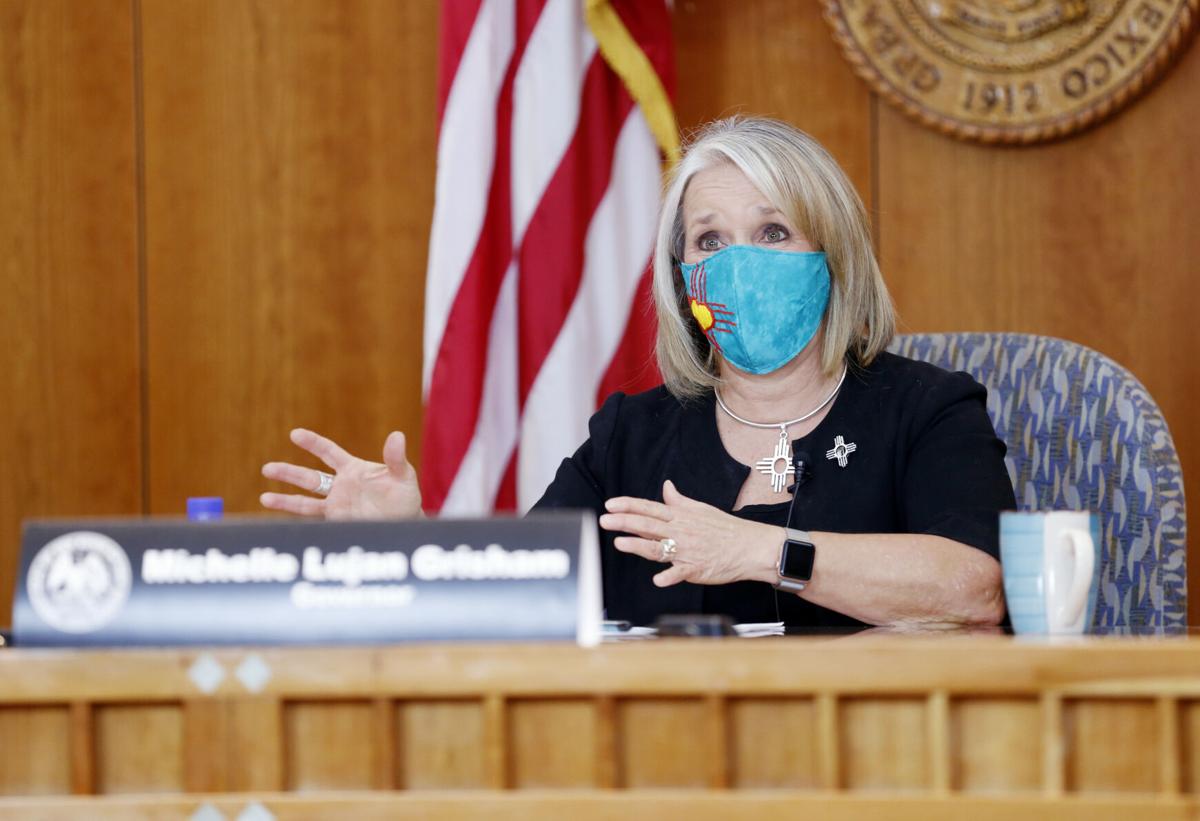 Gov. Michelle Lujan Grisham gives a coronavirus update from the Capitol on July 30. On Tuesday, she gave the keynote address for a conference on child well-being and strongly urged further investments in early childhood education and care programs. 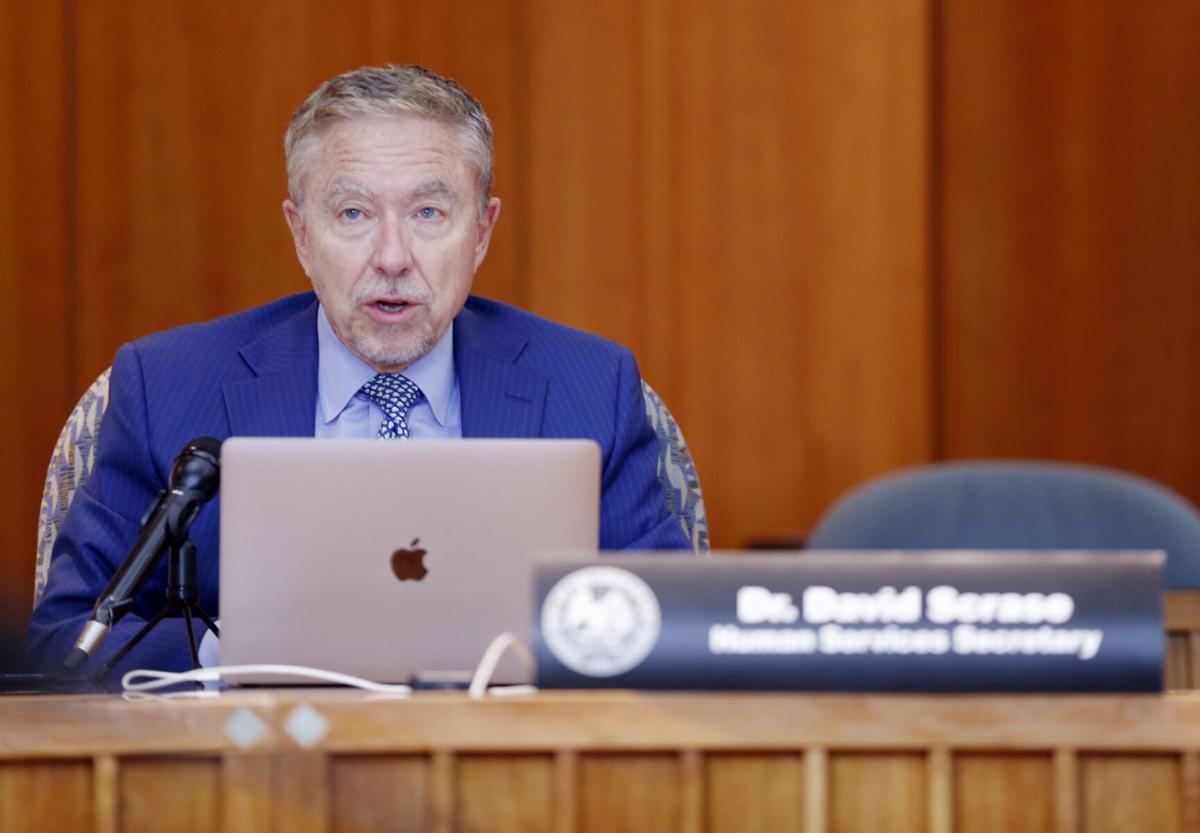 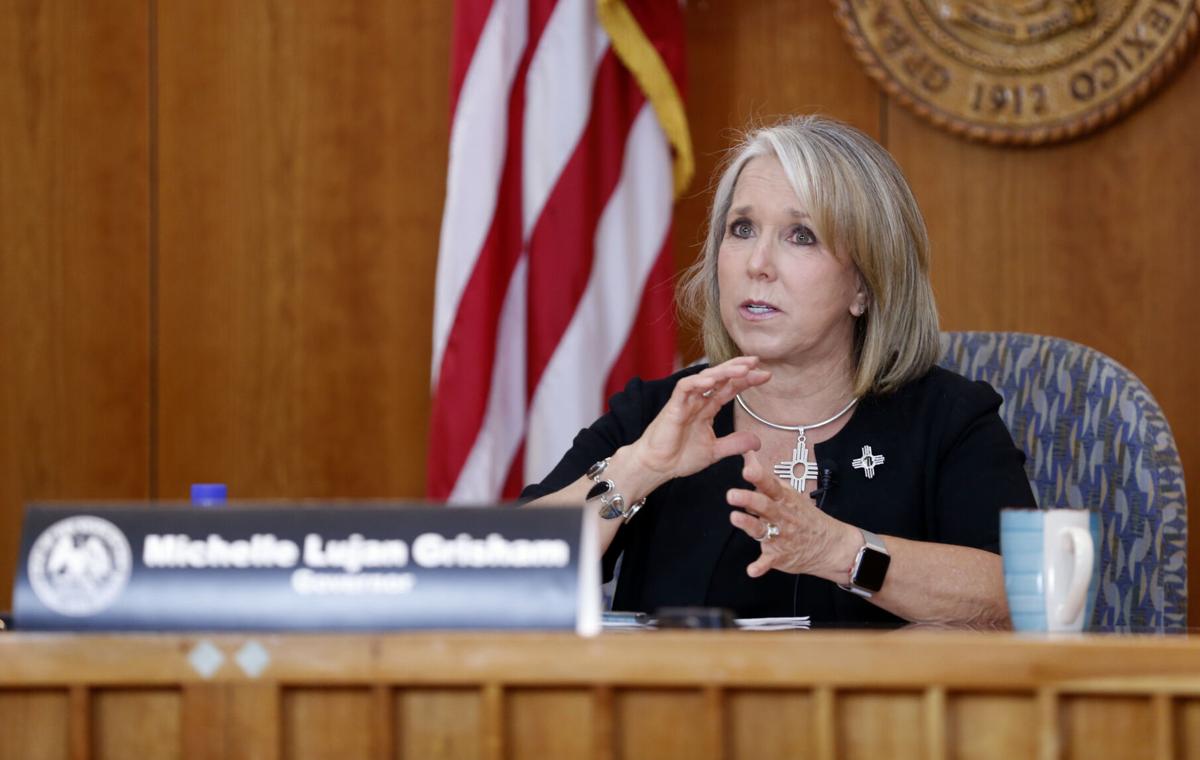 Gov. Michelle Lujan Grisham gives a coronavirus update from the Capitol on July 30. On Tuesday, she gave the keynote address for a conference on child well-being and strongly urged further investments in early childhood education and care programs.

New Mexico will keep most of its public health restrictions in place for another month as COVID-19 case numbers have stabilized but remain too high to relax the mandates, Gov. Michelle Lujan Grisham said Thursday.

The governor extended until the end of August the current occupancy limits on businesses and houses of worship and the state’s ban on indoor dining. The state’s rules prohibiting mass gatherings and requiring people to wear face coverings also will remain in effect.

If New Mexico is able to reduce the spread of the disease in the coming weeks, officials could potentially allow children to begin in-person learning after Labor Day and may permit a rollback of business occupancy restrictions in September, the governor said.

“We’re not there yet,” Lujan Grisham said in comments broadcast on her Facebook page. “The cases are still too high, but they’re better.”

State officials plan to announce some minor adjustments Friday to their order requiring people coming from outside New Mexico to quarantine for 14 days. Those changes likely will involve “providing a little bit of relief” to people traveling for business and medical reasons, but wouldn’t allow for “widespread tourism,” the governor said.

The seven-day average of new daily COVID-19 cases in the state has declined slightly over the past two weeks, according to a chart shown by Human Services Secretary David Scrase.

“Generally, things have stabilized,” Scrase said. “The good news is that it’s not going up.”

The governor added the state had recently done a good job of improving the numbers. The comments came after she decided in late June to freeze plans to further reopen the economy after a spike in cases.

“Today was not the worst news,” Lujan Grisham said. “We rebound I think fairly quickly, and I’m really proud of that for New Mexicans.”

Still, the state’s seven-day average of new cases has increased 41 percent in July, and the fatality rate is also on the rise week-over-week after it fell between May and mid-June.

The COVID-19 transmission rate is above the state’s target level and New Mexico reported its highest-ever number of daily new cases on Monday amid an outbreak at the Cibola County Correctional Center near Grants.

On Thursday, the state reported 255 additional cases for a total of 20,388. Three new coronavirus-related deaths were reported, bringing the state’s total death count to 635.

The briefing contained an emotional moment as the governor became choked up about not being able to visit her mother, Sonja, for whom she is a caretaker.

“I can get her back to remembering that we are in a pandemic,” she said. “But it’s really painful for me to witness that she declines a little every day.”

Regarding the spread of COVID-19 at federal prison facilities in the state, the governor said she spoke with Vice President Mike Pence earlier this week and asked for federal officials to follow the state’s COVID-safe practices in New Mexico prisons.

The U.S. Marshals Service and Immigration and Customs Enforcement have agreed to do so, she said, and prison staff will wear masks and won’t transfer prisoners between states.

Despite that development, Lujan Grisham spent a large chunk of the briefing chiding the federal government for its COVID-19 response.

“It should not take a call with the vice president,” she said. “Corrections, I fear, will continue to be a place where we have high risk. And I’m horrified by the fact that any corrections facility managed by any government or entity would not follow better COVID-safe practices.”

The governor also had harsh words for local sheriffs and city governments that have resisted enforcing the public health mandates in recent weeks.

“I’m incredibly disappointed,” she said. “They are absolutely reckless.”

Lea County’s sheriff said he would not enforce the state’s face covering requirement and his office posted a photo on social media of its deputies violating both the indoor dining ban and the mask mandate.

“Do not be alarmed when you see [Lea County Sheriff’s Office] deputies enter local restaurants,” the office posted to Facebook on July 21. “We’re not there to enforce the governor’s mandate. We’re there to grab a bite and support our local businesses!”

The total number of COVID-19 cases in Lea County has more than quadrupled since the start of July, from 134 on the first of the month to 596 Thursday.

Meanwhile, the Roswell City Council voted last week not to enforce any of the governor’s public health mandates, and Eddy County has filed a legal brief with the state Supreme Court arguing the governor has overstepped her authority by banning indoor dining.

The governor noted Attorney General Hector Balderas filed a motion Wednesday calling on the state Supreme Court to prohibit the Lea County Sheriff’s Office from violating the health orders, and said the state would punish noncompliance elsewhere as well.

“We are now going to very aggressively enforce,” she said.

The governor added the state would take action against political candidates who plan to campaign door to door or hold large gatherings ahead of the November elections. She said state officials had imposed a cease-and-desist order on one candidate, without saying who it was.

The state Democratic Party has promised not to engage in campaigning that would violate public health orders, Lujan Grisham said, adding she was “calling on all political parties and politically affiliated organizations to follow suit.”

“Not all of them are,” she said. “We will continue to work to enforce that because it’s hugely problematic.”

Republicans sharply criticized those comments and others by the governor in a statement late Thursday.

“Today the governor blatantly made the public health order political,” state Republican Party Chairman Steve Pearce said. “During her press conference, the governor denounced candidates for going door to door, taking away our freedom of speech and right to seek votes.”

The governor also criticized the federal government for U.S. Health and Human Services’ recent decision to instruct hospitals across the country to stop sending information about their coronavirus patients to the Centers for Disease Control and Prevention, and instead to report to a new HHS portal.

The New Mexican reported Thursday that some hospitals in the state have struggled to adapt to those changes and, according to a White House report, have significantly underreported data to the federal government on the number of COVID-19 patients admitted to their facilities.

“We could spend an entire month talking about the changes in data collection, data reporting and, quite frankly, the very odd reporting out of the feds about this situation,” the governor said.

Human Services Department officials did not respond to questions about the report Wednesday, but Scrase said Thursday the federal health agency was asking for “double the number of data fields” and that smaller hospitals in particular were having trouble complying with the new requirements.

“I think there have been a number of rural hospitals who really struggle with this onerous new data requirement,” he said. “There was a lag there. I think hospitals are struggling to catch up.”

While the White House coronavirus task force said the lapse in reporting could cause an “underestimate of the actual total number of COVID-related hospitalizations,” Lujan Grisham and Scrase said that the gap in data transmission did not cause inaccuracies in the hospitalization numbers the state releases daily.

“I think, though, that the data New Mexico is using to manage COVID remains intact,” Scrase said. “We still have all of that information.”

This mask and closure junk has to end, job 4 has now reported an 11 year old committed suicide because of these closings.

That’s enough of this freakin game libs are playing, now little ones are losing out.

Time to move on, again if you are sick stay home just like any other illness. Amazing how weak Santa Fe adults are, playing games with kids lives.

You will notice, if you watch the whole thing:

The governor takes off her mask about a minute into the 2 hour briefing while other people are still in the room and whoever is speaking does the same thing, which is the exact opposite of what we should be doing. If you want your face to be seen, go in a room alone and talk to the camera. How can we beat this thing if our leaders cannot even do the right thing?

"you may have seen the many televised indoor events where the audience members are sitting politely distanced and masked, listening to the speaker, who is the only unmasked person in the room. Jimenez, the aerosol expert, pointed out to me that this is completely backwards, because the person who needs to be masked the most is the speaker, not the listeners"

Governor and dems fault kids are getting stressed and committing suicide? I dont hear anyone else making these rediculous regs.

Politics, politics, politics, That is all she is about, mean while she is destroying the state’s economy and it will take years for people to recover from that. COVID doesn’t play politics why is the Governor?

She is trying to save lives. Thankfully, she understands that is her primary responsibility

I know one 11 year old she has some responsible for his death. Can’t hide behind politics, reality comes to us all! By the way, the #s have went way up since mask implementation, you have some jacked up math skills Barry.

what is the message, only a few of MLG sheeples are following her, everyone else has blown her off. She will have to hire hundreds more secret police and AG will be busy.

Who are the sheep? People that understand and respect nature, history and science or those that drink the koolaid offered up by an ignorant, bigoted gameshow host? Have you noticed that Lea County has quietly become one of the virus hotspots?

Yes, more punishment for her political enemies to be handed out. The way of a tyrant....the beatings will continue until morale improves......

Way to go mlg! Gracias. You will re-elcted, hands down.

Like, I thought you wanted the state to reopen, including schools. Haven't you posted numerous times about how schools need to reopen STAT, and how lazy teachers are just scrumming around in their pjs? Which is it, Contrary Connie? Oh wait...you live to inflame. What you actually believe, I suspect, is buried so deep not even you can see it.