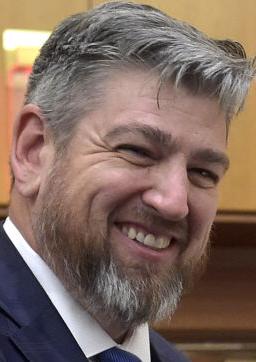 State Sen. Mark Moores, once a football star, knows a bit about reversing his field.

Moores graduated from Walt Whitman High School in the Washington suburb of Bethesda, Md., then accepted a scholarship to play for the University of New Mexico.

Moving west was easy for him. Moores’ mother, Julia, grew up in Española, and he had visited New Mexico many times.

He stayed in the state after college, never regretting his decision.

Until recently, he never thought about returning to Washington, the city he happily left behind. This weekend brings him to a crossroads.

Moores and his wife, Lisa, are discussing the possibility of his running for Congress in a special election.

A Republican from Albuquerque, Moores would be his party’s strongest candidate to fill a vacancy in the 1st Congressional District.

Democratic Rep. Deb Haaland is on her way to becoming secretary of the interior. The U.S. Senate could vote on her confirmation this week.

Haaland will resign from Congress once confirmed, and the mad scramble to replace her will escalate.

Many Democrats, including a handful of state legislators, already are running for the seat Haaland holds. The Republican lineup is thinner and less impressive.

Moores would change the odds if he enters the competition. He would give his party a chance of winning the 1st District, something no Republican has done since 2006.

A few months ago, after President Joe Biden nominated Haaland to lead the Interior Department, Moores says he didn’t think about running for Congress.

But many people have asked or urged him to get in the race. They convinced him to at least think about it.

In the state Legislature, Moores tried to reform the system for choosing the nominees to succeed Haaland.

Under current law, a small group of party insiders from the Republican and Democratic central committees would choose the candidates for the special congressional election.

He introduced Senate Bill 254 to require primary elections to select party nominees for the special election. His bill is stuck in a Senate committee with less than a week to go in the legislative session.

“Dead as a doornail,” Moores said.

It means Moores and his wife, both members of the Republican Central Committee, will be part of 135 or so GOP members who will choose a congressional nominee.

At 6-feet-7, Moores is one of three Albuquerque-area Republicans still standing in the state Senate. And he’s the only one whose district is entirely in the city.

Moores won reelection to his third term in November as fellow Republicans fared badly in Albuquerque.

Upstart Democrats ousted Republican Sens. Candace Gould and Sander Rue. Another Republican, Bill Payne, retired from the Senate, and a Democrat won that seat, too.

Moores’ voting record in the Senate is mostly conservative. But he will go against type by teaming with Democrats.

For instance, Moores and Sen. Jeff Steinborn, D-Las Cruces, sponsored the bill that outlawed contests to see who could kill the most coyotes.

The two senators, who seldom agree on anything, said the wanton killing was cruel and disrupted a system in which coyotes help control rodent populations.

Moores decided to sponsor the bill after seeing a pack of coyote killers display a load of carcasses.

“Bunch of yahoos,” he said.

Moores this year worked with liberal Sen. Jerry Ortiz y Pino, D-Albuquerque, on a bill to create a seven-member commission that would draw up plans for legislative redistricting.

As it stands, state lawmakers themselves configure political boundaries after each U.S. census. The system often leads to expensive lawsuits on claims of gerrymandering.

If Moores were to run for Congress, he would give Republicans hope. He also would be an underdog.

Democratic state Reps. Melanie Stansbury and Georgene Louis already are running hard for Congress. Either would be a tough matchup for Moores, given the recent history of the 1st District.

The Democrats have a deep bench. Republicans might have a good candidate, but he’s still on the sidelines, thinking about whether he wants to return to Washington.

GOP members know what’s ahead if they can’t persuade Moores to run. They might as well wave a white flag.

Ringside Seat is an opinion column about people, politics and news. Contact Milan Simonich at

The main problem for any experienced, intelligent conservative/moderate is that intelligence and experience and character and integrity do not matter for NM voters. Look at who they have elected for most any statewide or federal office the last decade or so, none of them worth a plug nickel and do nothing for the citizens, but lots for themselves. Why would an intelligent, experienced, high character individual want to join that crowd?

Moore sounds like a good guy but we need to make sure Democrats maintain their majority in Congress so we don't return to the far-right world of the former president and his extremist followers like Lauren Boebert who want to bring military weapons to the House floor and block all environmental protection efforts and civil rights measures. Perhaps Moore could help moderate the republican party but right now we can't take a chance as Don Trump continues to drag the party into a racist, far right, anti-government fantasy world.

Yep, open borders, free everything for everyone, boys competing against girls in sports, the military occupying DC, covid money for prisoners, and on and on. Yep, count me in for keeping the dems in charge.

Yep. You prefer the far left world of The Squad.

Go for it, Senator Moores! The people need a real choice. The State GoP needs to prove it has credible, reasonable candidates for higher office. Where do I send a check?