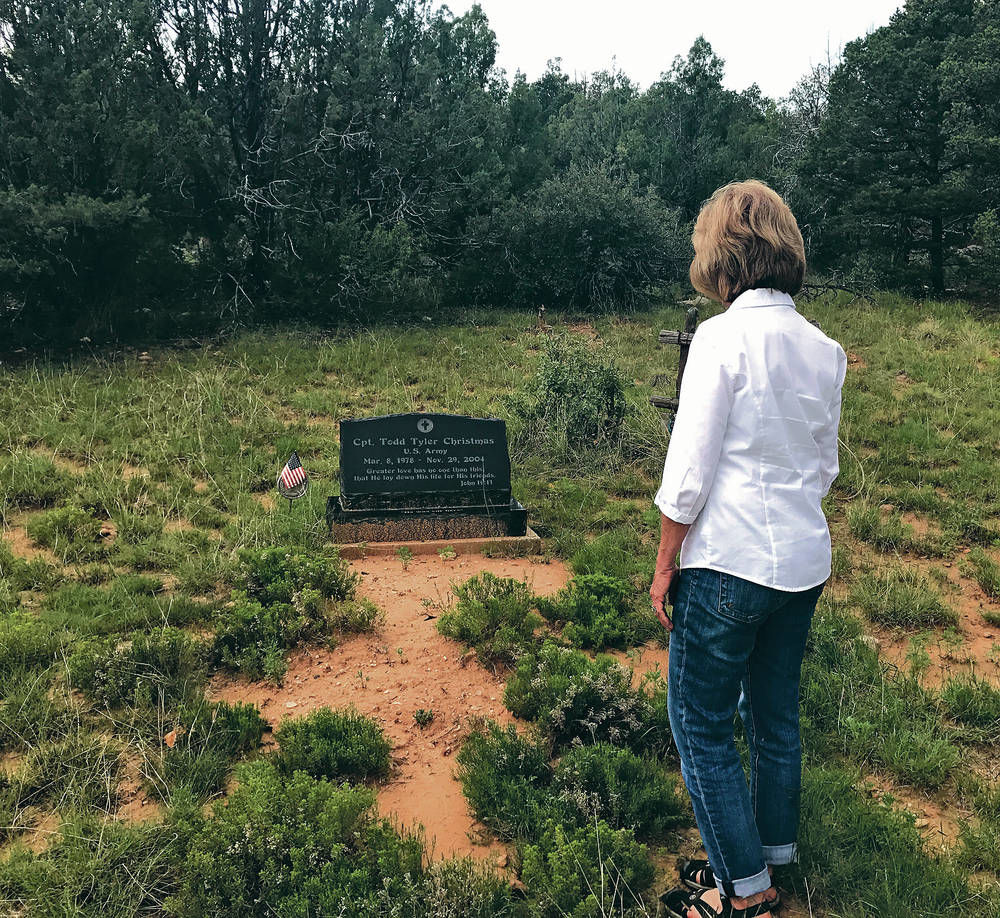 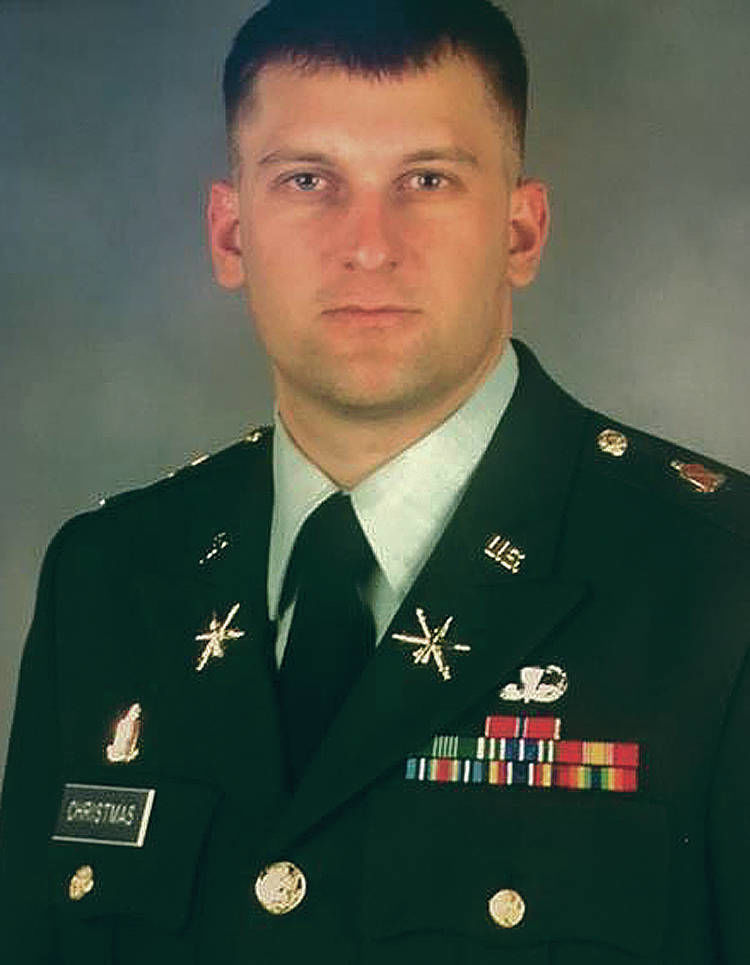 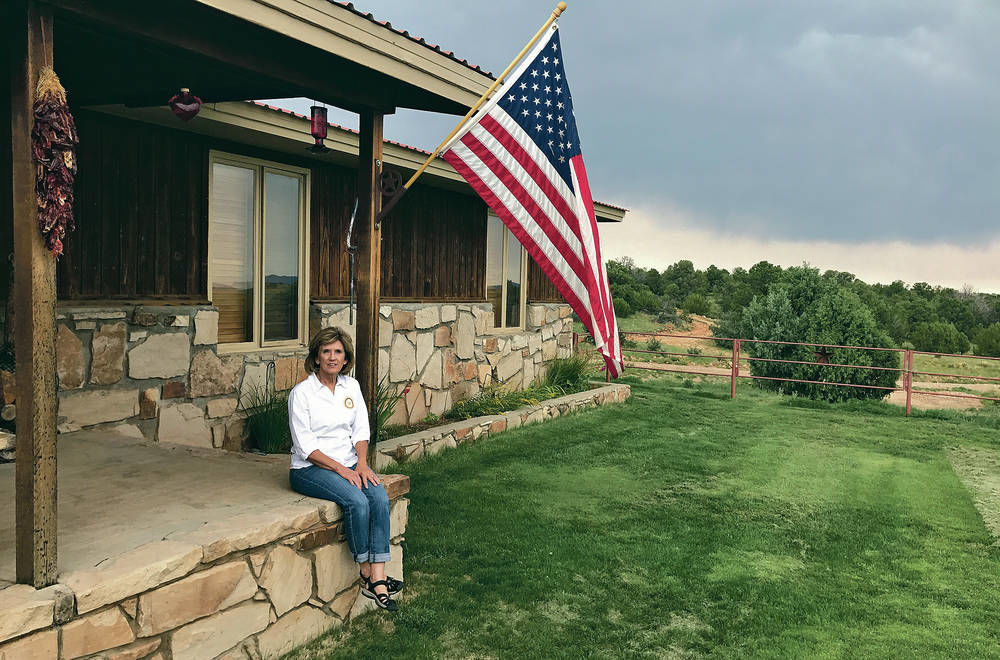 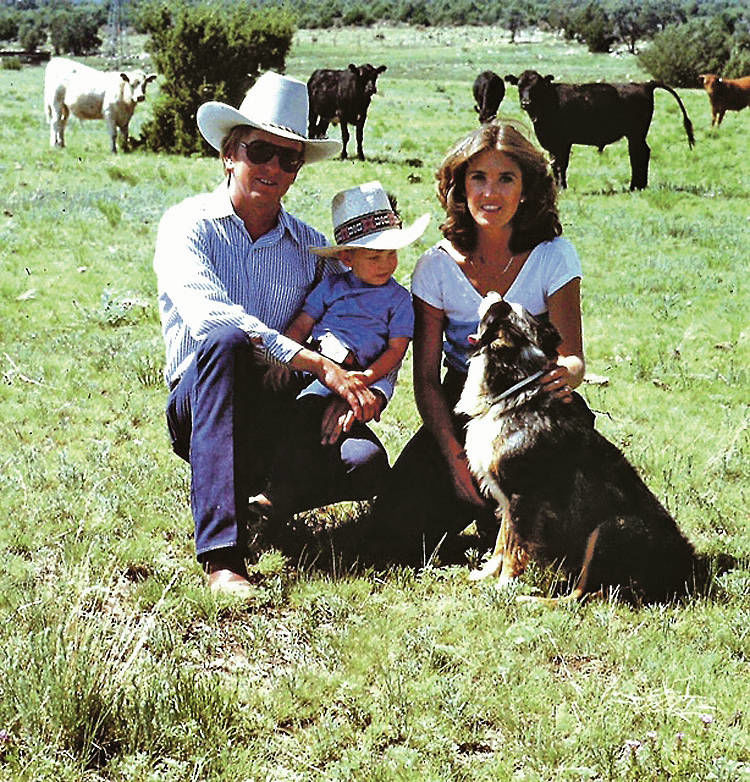 WAGON MOUND — If you look about 10 miles east of Todd Tyler Christmas’ gravesite, nestled in a clearing on his family’s northeast New Mexico ranch, you can see the Wagon Mound hill. It’s the outcropping Todd eagerly climbed for the first time when he was in third grade.

His mother, Becky Christmas, recalled the excitement her son expressed upon telling her he was the first one to reach the summit during that climb with classmates.

“He always wanted to be a soldier,” she said. “He was a born leader.”

Todd Christmas did become a soldier, and a good one at that. He served in U.S. Army during the Iraq War in 2003-04. But when he died in a helicopter accident in late 2004 while on duty in Fort Hood, Texas, it changed his mother’s life.

Becky Christmas said she worried the voices of military members like her son’s would disappear after they died.

Now, she feels a responsibility to ensure that does not happen.

Becky Christmas, a 65-year-old rancher, recently became the primary national voice to represent veterans who died while serving their country and their families. In June, she was appointed president of the American Gold Star Mothers, a 90-year-old organization composed of about 1,000 mothers of children who were killed while serving in the military.

It’s a group started by a coalition of 25 mothers in June 1928, nearly 10 years after the end of World War I, a conflict that killed more than 116,000 Americans. Grace Darling Seibold, who lost a son during the Great War, is credited with founding the organization after visiting military hospitals in search of information about her son.

At its peak, the organization had 25,000 members nationwide. Those were the days when mothers and other family members hung banners or service flags in their windows featuring a blue star for every son or daughter serving in uniform.

Gold stars represented a child who died while in the military.

“But we are not a grief organization,” Becky Christmas said. “We are an organization that supports veterans.”

To that end, the all-volunteer group focuses each year on addressing one aspect of veteran support. This year and last year, that issue has been veteran suicide awareness.

The effort has been driven by sobering statistics, like the fact that 75 percent to 80 percent of all women who apply to be members of the organization now list “suicide” as the cause of death for their sons and daughters, Becky Christmas said.

“Military suicide awareness is more important than ever because even one death by suicide is unacceptable,” Christmas said. As mothers who have lost sons and daughters, she added, they are in a strong position to reach out to veterans suffering “internal wounds … from post-traumatic stress disorder” and help them find resources to recover and survive.

“Mothers are the first love of a child,” she said. “We carry them for nine months. We give birth. It may not be a stronger bond than with the father, but it’s a different bond, a special bond.”

Jo Anne Maitland, National Service Officer for the American Gold Star Mothers, said Christmas is the perfect candidate to lead the group: “When you are dealing with a brokenhearted mother dealing with the worst thing that can happen to a mom, you have to have not only compassion but a sense of fairness and grace,” she said. “Becky captures all of those things in her leadership.”

When Todd Christmas died 14 years ago, his mother said, she knew nothing about the American Gold Star Mothers, nor did she have any plan to join the group. She was looking for the strength to help not only herself but also her husband and two sons survive the loss of Todd, who died the Monday after Thanksgiving weekend in 2004.

There was no knock on the door

As a child, Todd enjoyed riding horses, hunting, hiking, taking part in 4-H activities, playing basketball and running track. One of his favorite childhood books was The Fox and the Hound, and he rejoiced in knowing that a character named Todd is considered to have a fox-like ability for cunning and developing survival skills.

He always wore a cowboy hat and later, after joining the Army in 2001 as an air defense artilleryman, became known as the “cowboy soldier.” He attended New Mexico Military Institute in Roswell and then attended Texas A&M University, earning a bachelor’s degree in 2001 in agricultural economics.

His desire to serve his country led him to join the Texas Army National Guard. He was commissioned as an air defense officer through the Texas A&M Corps of Cadets, and his mother still keeps his Corps of Cadets boots (size 10½) in a display case in the living room of her home.

Todd married Erica Laine Smith of Arlington, Texas, in August 2001. Less than two years later, he was on his way to war to join an air defense artillery unit in Iraq. He did not talk to his mother about his combat experience other than to sometimes allay her fears by saying he was always in a safe zone and in no danger — even if it was not the truth.

She never for a moment thought he would die over there. She knew in her heart he would come home safe, and the following year, he was shipped stateside and stationed at Fort Hood, Texas. Todd and Erica came to visit the Wagon Mound ranch for Thanksgiving weekend in 2004.

Early that following Monday, Capt. Todd Christmas was aboard a UH-60 Black Hawk helicopter when it crashed in Texas with six other soldiers aboard. Todd’s father-in-law, upon hearing the news, called the Christmas family to say it was possible Todd was on that flight.

There was no knock on the door, no casualty officer or Army chaplain to comfort the family. A big snowstorm had moved into the Wagon Mound area, and the roads were too tricky for travel. The Army did call and was “wonderful, supportive,” Becky Christmas said. An Army representative told her they would see to it that someone came through the storm if need be.

At the time, she had no idea there was an organization of mothers going through the same sort of trauma until another woman — a member of the Blue Star Mothers, which represents mothers of children serving in the military — told her about it. After attending one national convention of Gold Star Mothers, Christmas knew she had found a venue for her love of her country and its citizens.

The members volunteer in veterans hospitals and homes, appear at military ceremonies and parades, raise money to help struggling veterans and work to spotlight veterans issues.

But membership in the organization has dropped over the past few decades for a number of reasons, notes Holly Fenelon, author of The Knock At The Door: The History of Gold Star Mothers. More women are working. Enrollment in fraternal organizations has been declining. During the Vietnam War era, fewer mothers may have been interested in hanging out blue or gold stars to signify military service, given the controversy of that conflict.

She said American Gold Star Mothers can grow stronger if the group gets behind a topical issue, like veteran suicide awareness.

“Each mother is a lone voice, but if you have 1,000 lone voices, that’s a chorus, and their sound can make a huge difference in terms of who listens and what they hear,” Fenelon said.

Becky Christmas agrees. “I represent so many wonderful women who have strong hearts and a deep sense of patriotism,” she said. “It would be so easy to not get out of bed every day after you lose a child. But we do it to help veterans.”

At the family ranch, a stone statue of a fox stands vigil over her son’s grave.

“Sometimes I feel Todd close to me, watching over me,” she said. “I think he would be proud of me.”

• For more information on the American Gold Star Mothers or to learn how to apply, visit www.goldstarmoms.com.