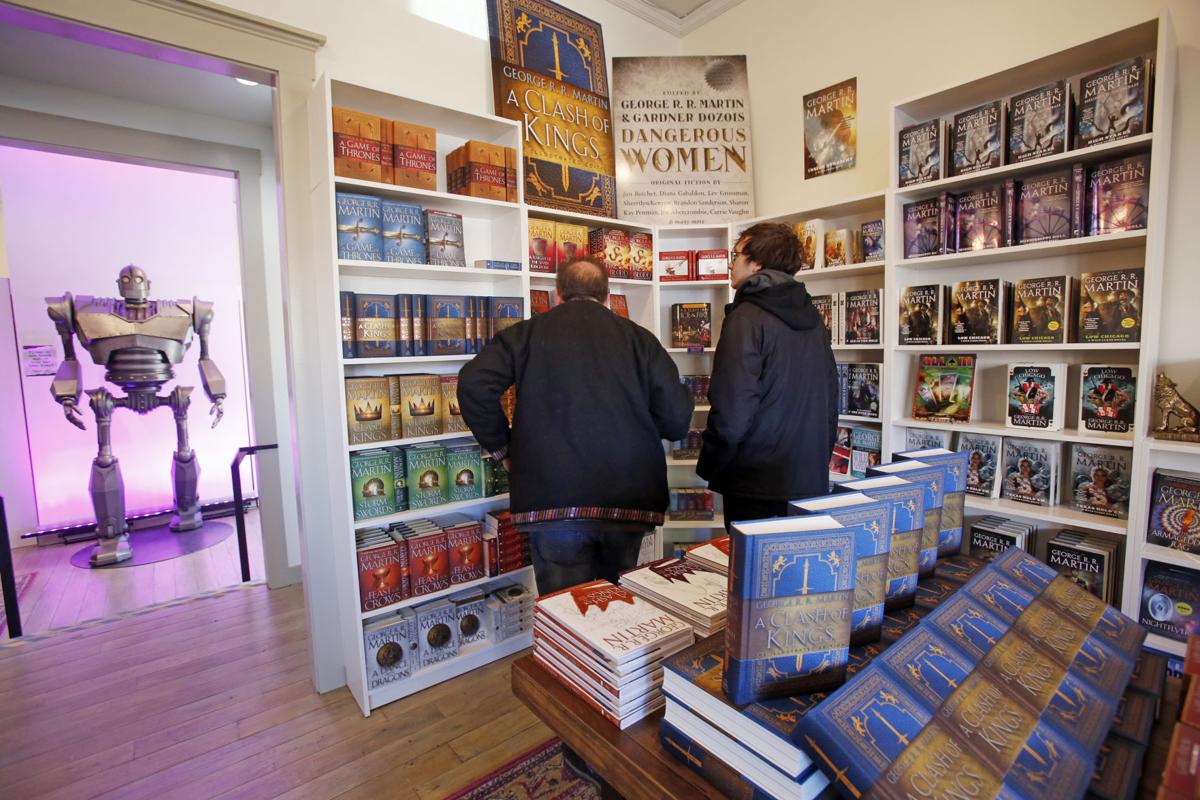 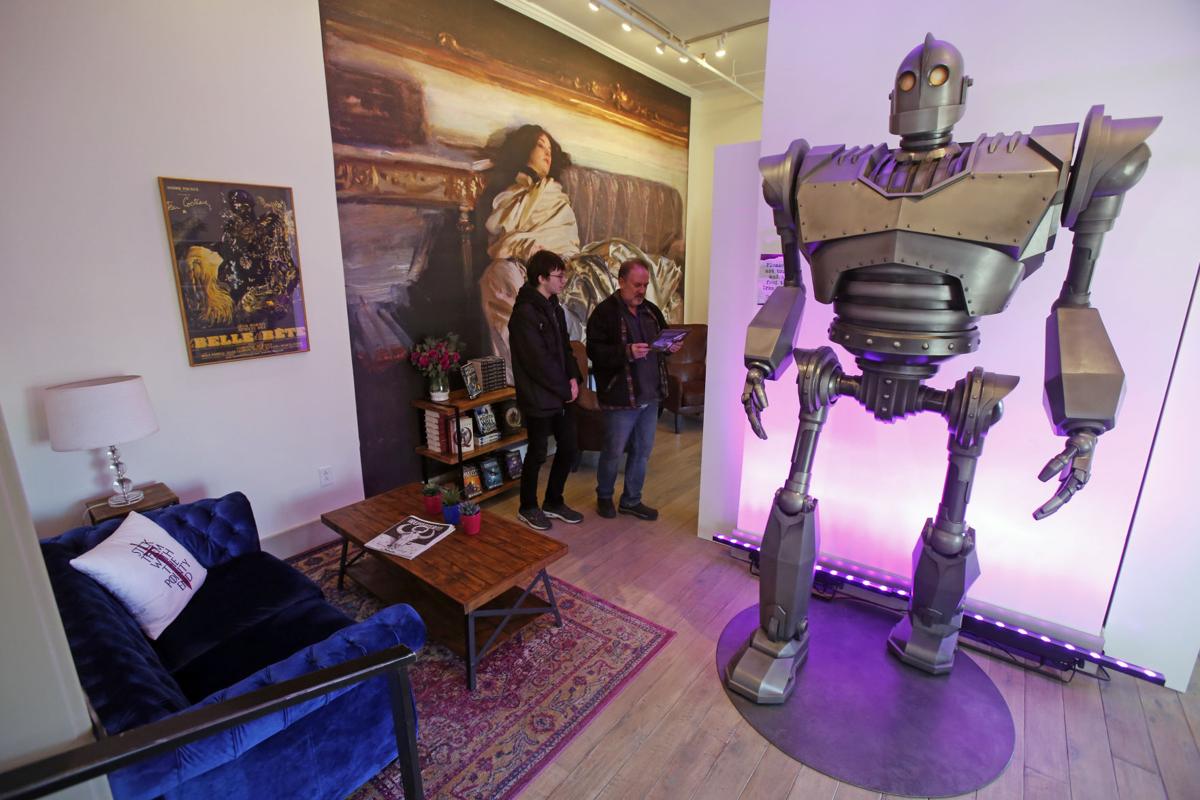 George R.R. Martin's Beastly Books includes a sculpture of The Iron Giant from the 1999 animated science-fiction film of the same name. 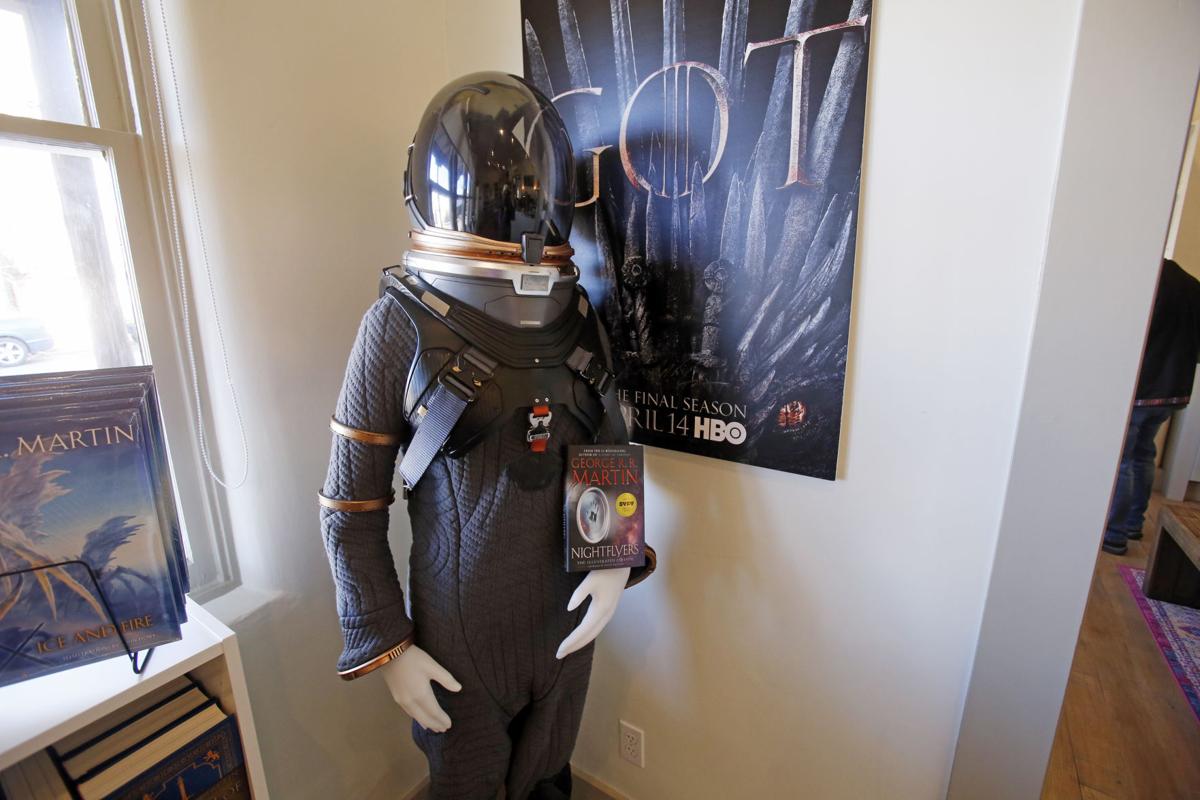 The costume Jodie Turner-Smith wore in the TV series Nightflyers is on display at Beastly Books on Friday.

George R.R. Martin's Beastly Books includes a sculpture of The Iron Giant from the 1999 animated science-fiction film of the same name.

The costume Jodie Turner-Smith wore in the TV series Nightflyers is on display at Beastly Books on Friday.

Fantasy author George R.R. Martin’s latest venture is a book shop next to his Jean Cocteau Cinema by the Santa Fe Railyard.

Beastly Books, which sells not only autographed books but Game of Thrones merchandise and cups of espresso, quietly opened last month in space formerly occupied by a hair-styling business called Wild Hare Salon.

Martin, whose other local investments famously include the Meow Wolf immersive art installation on Rufina Circle, had been selling books by various authors in the lobby of his theater at 418 Montezuma Ave., a two-story building he acquired along with the Jean Cocteau in 2013.

“Dozens of terrific, award-winning, bestselling writers have appeared at the [Jean Cocteau] to speak, read, and sign their books,” he wrote on his blog earlier this month, including local authors, mystery writers, historical novelists, romance writers and others.

“The only problem,” he said, “was that the Jean Cocteau lobby was far too small for us to display all of those wonderful autographed books.”

Those who enter across a doormat that declares “Beyond Here There Be Dragons” will find not only a coffee bar but rooms lined with bookshelves, artwork and upholstered reading chairs.

They’ll also encounter an imposing sculpture of The Iron Giant, title character in a 1999 animated science-fiction film based on a novel about a giant metallic robot who fell from outer space.

“The feeling we’re going for is kind of sci-fi and fantasy,” said general manager Rory MacPherson. In addition to the genre of many of the books offered, he said, “It kind of ties in with the kind of films we show and ties in with the comic book store,” a business operated by a tenant around the corner from Beastly Books.

The sign outside the book shop features a bespectacled, lion-maned beast holding an open book, a variation on the logo adopted for the Jean Cocteau Cinema by Martin, who the store’s Facebook page notes was a writer and producer for the Beauty and the Beast television series in the late 1980s and who, when he acquired the small Santa Fe theater, “made the Beast our mascot based on Jean Cocteau’s 1946 film La Belle et la Bête.”

Martin’s fame widened when books he authored became the basis for the Game of Thrones television series. Now fans of the HBO mega-hit can visit Beastly Books to buy A Song of Ice and Fire calendar or an autographed copy of A Clash of Kings 20th Anniversary Illustrated Edition, check out recipes in the official Game of Thrones companion cookbook, A Feast of Ice & Fire, or peruse shelves of Game of Thrones-themed card games and board games featuring tabletop miniatures.