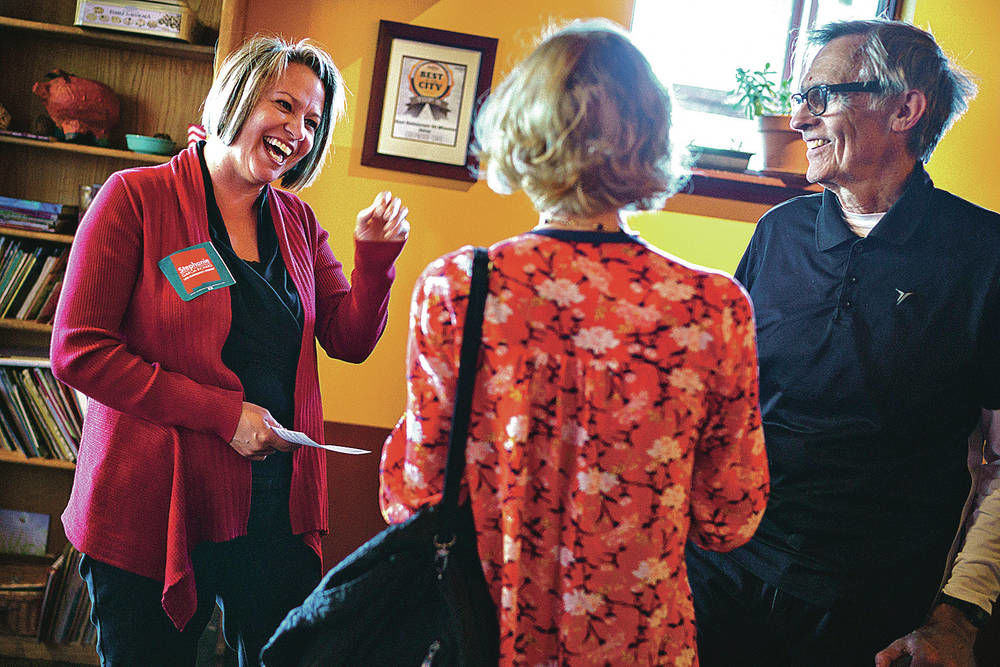 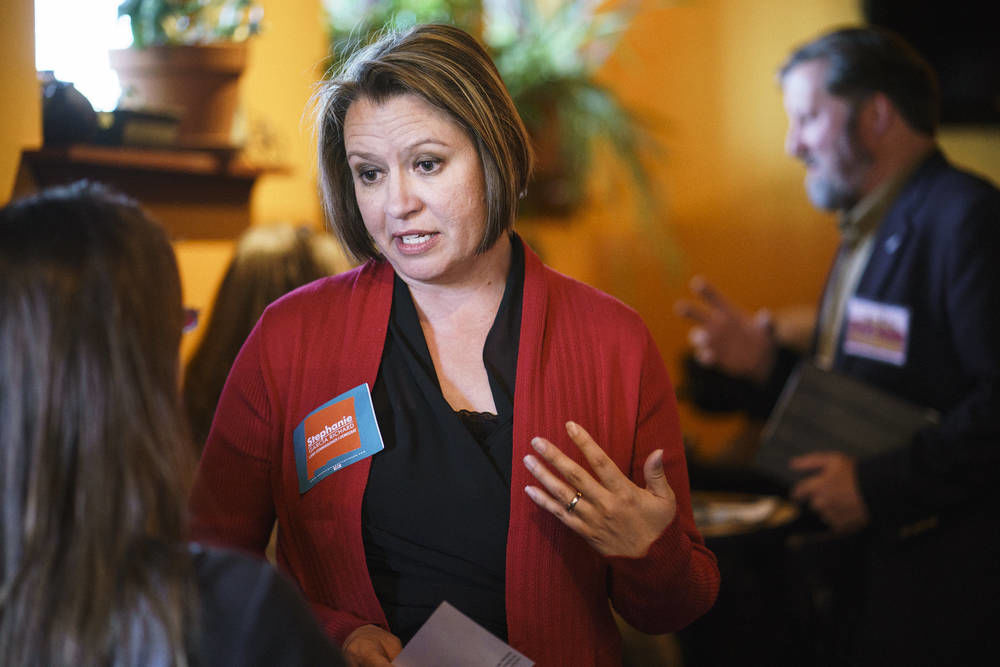 Who is Democrat enough for the party’s nomination for land commissioner?

Supporters of state Rep. Stephanie Garcia Richard have argued she is the steadfast Democrat in a three-way primary for the most important job in New Mexico government you’ve probably never heard of.

While the office is usually low-key, the primary has spurred a battle within the party over just what it means to be a Democrat — and what chops the next land commissioner really needs.

The commissioner oversees 9 million surface acres and 13 million subsurface acres that are leased for oil and gas production as well as other uses, generating hundreds of millions of dollars annually — mostly for New Mexico’s education system.

A savvy administrator could potentially generate more money for the state’s coffers. And a visionary could reinvent the office, shifting the focus from extracting resources and toward whatever the future might hold for all that state land.

Garcia Richard, 43, has offered herself as the candidate who will carry the mantle of Ray Powell, a longtime land commissioner who gave up an electoral comeback due to health reasons. That may give pause to Democrats who believe the office needs new ideas.

Still, Garcia Richard argues her experience in the Legislature — something another Democrat in the race, Garrett VeneKlasen, doesn’t have — suits her for the role in state government. She has supported bans on coyote-killing contests and fur trapping on state land, making her the choice of a major animal welfare group and setting her apart from the other Democrat in the contest, state Sen. George Muñoz. And she contends it is only reasonable to have a teacher like herself lead an organization that generates so much of the funding for New Mexico’s schools.

“This is a chance to use everything that I’ve built in District 43 on a broader scale,” she said in a recent interview.

From red to blue

The daughter of a schoolteacher, Garcia Richard was born in Tucumcari and raised in Silver City. She attended Barnard College at Columbia University in New York and earned a teaching certificate from California State University-Los Angeles. Garcia Richard returned to New Mexico in the late 1990s, went on to teach in schools around Northern New Mexico and currently works as the curriculum coordinator for the Pojoaque Valley School District.

Her foray into politics won the Democrats a long-held Republican seat in the state House of Representatives in 2012.

She first ran for House District 43 in 2010 and came up just short. Represented since 1991 by the GOP’s Jeannette Wallace, the district included Los Alamos and parts of Sandoval and Santa Fe counties. Garcia Richard fell short by 190 votes out of nearly 11,000 (she was on the ballot that year as Stephanie M. Richard).

After a round of redistricting and the appointment of a new Republican to the seat following Wallace’s death in 2011, Garcia Richard ran again in 2012. That time, she won with nearly 52 percent of the vote. And each year since, she has won re-election with widening margins, marking Los Alamos’ shift away from a Republican holdout in otherwise deep blue Northern New Mexico.

“I’ve got a history of beating Republicans,” Garcia Richard touted at a recent forum.

In the state House, she has taken up liberal causes. She has served as chairwoman of the House Education Committee and supported a constitutional amendment limiting the size of school classes. Perhaps most notably, she sponsored a major gun control bill in 2017 that would have required a background check any time a gun is sold or transferred to another person, with some exceptions. The measure aimed to close what gun control advocates call the “gun show loophole.”

It met heavy opposition from groups such as the National Rifle Association and died in a House committee.

Garcia Richard’s decision to run for land commissioner came as something of a surprise. In an interview, there was a pause when she was asked to name a favorite piece of state trust land.

The news of her campaign came in November, when an email popped into inboxes around the state announcing Powell was withdrawing from the race and endorsing Garcia Richard.

Powell had been poised for a comeback. In 2014, he narrowly lost his re-election campaign for land commissioner, an office he had held off and on for more than a dozen years.

And last year, he was gearing up to try and win back the office in 2018. But the veterinarian was diagnosed with an autoimmune disorder, and as a result, withdrew from the race in November.

But rather than end his involvement and let VeneKlasen fight for the nomination against Muñoz, a state senator from Gallup who eventually would enter the race, he recruited Garcia Richard.

“I know all the candidates and have known them for decades. They all have their individual strengths,” Powell said last week. “She really has the breadth knowledge of state government.”

Powell points to Garcia Richard’s time in the Legislature as an example. They had gotten to know each other the last time he was land commissioner.

But it is more than that, Powell added. VeneKlasen had been a Republican and an advocate for sportsmen, and that is not who Powell envisioned for the office.

“I’m a Democrat. I look through a different lens on most issues than Garrett does,” he said.

When Garcia Richard and VeneKlasen shared a stage at a candidate forum in Eldorado earlier this month, there was far more agreement than disagreement.

Garcia Richard says she would support limits on flaring methane. And she describes using the office as a platform to push policies that are outside the land commissioner’s control but still overlap with the office’s role. For example, she would support using a larger share of investment revenues from the state’s multibillion-dollar Land Grant Permanent Fund for early childhood education — a priority for House Democrats.

Both candidates contend the land office needs to grow to take on the role they believe it should have in managing the state’s sprawling spread of land.

But it was wildlife that set them apart.

VeneKlasen has said he would support a ban but the organization he has led, the New Mexico Wildlife Federation, has not supported such a measure. And Muñoz has voted against a ban.

In turn, Garcia Richard has won the endorsement of Animal Protection Voters for her opposition.

In a recent interview, she said: “There is no wildlife champion in the race except me.”

In a sense, Garcia Richard is arguing there is no champion for progressive Democrats in this race, either.

The legislator is not just running in Los Alamos, though. The question is whether her positions will be enough to help her break through a three-way statewide race in a party where what it means to be a Democrat is not always so simple.

Experience: Member of the state House of Representatives since 2013

Criminal record: Asked whether she had ever been arrested, Garcia Richard’s campaign said she was cited but not booked for jumping a subway turnstile in college.

Clarification: This story previously reported that Garrett VeneKlasen, a Democrat running for commissioner of public lands, is opposed to banning coyote killing contests. The organization he managed, the New Mexico Wildlife Federation, has not supported a ban and has been neutral on the issue. But VeneKlasen says he personally opposes animal killing contests and would impose a ban if elected.