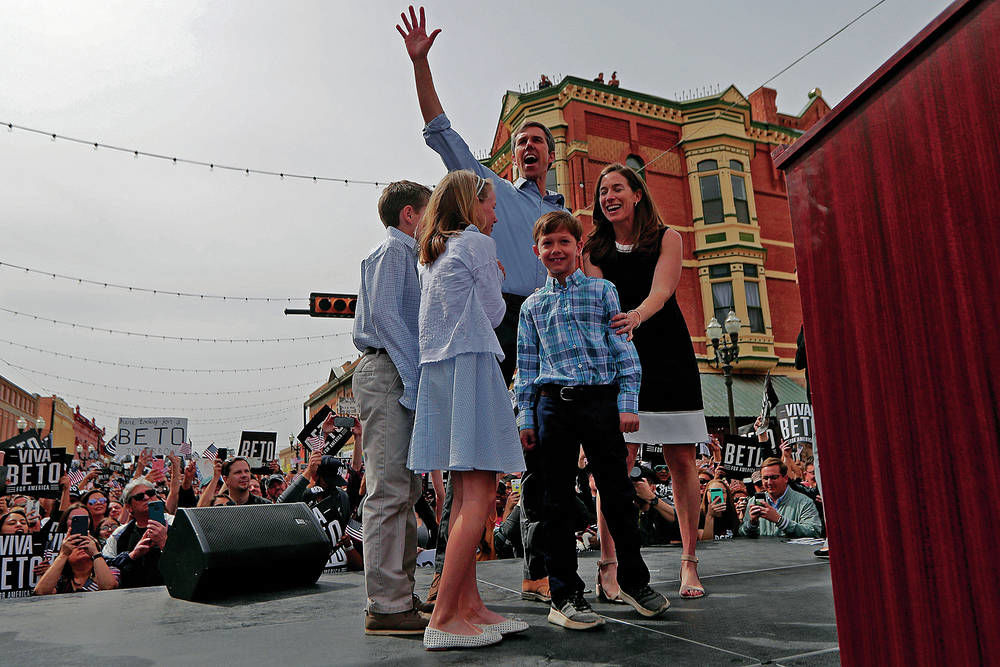 Democratic presidential candidate and former Texas Congressman Beto O’Rourke arrives on stage with his family at his presidential campaign kickoff Saturday in El Paso. With him are his wife, Amy, and their children, Ulysses, 12, from left, Molly, 10, and Henry, 8. Amy Sanders O’Rourke was raised in Santa Fe. Gerald Herbert/Associated Press 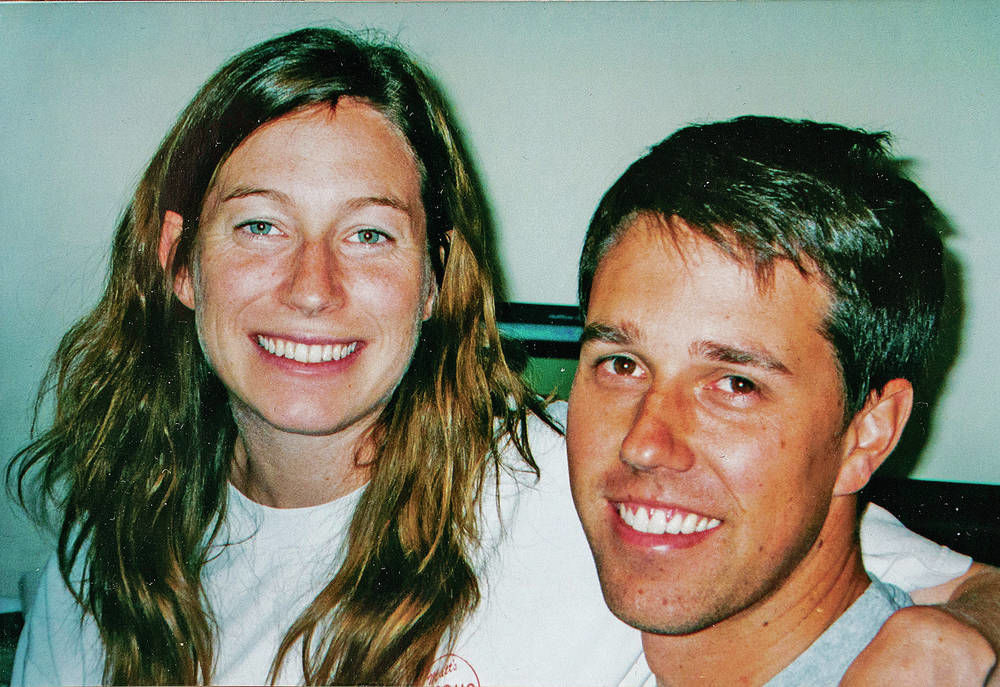 Beto O’Rourke and Amy at Beto’s mother’s house in 2006. The pair were married at the Sanders family ranch near Lamy. Courtesy Melissa O’Rourke

Democratic presidential candidate and former Texas Congressman Beto O’Rourke arrives on stage with his family at his presidential campaign kickoff Saturday in El Paso. With him are his wife, Amy, and their children, Ulysses, 12, from left, Molly, 10, and Henry, 8. Amy Sanders O’Rourke was raised in Santa Fe. Gerald Herbert/Associated Press

Beto O’Rourke and Amy at Beto’s mother’s house in 2006. The pair were married at the Sanders family ranch near Lamy. Courtesy Melissa O’Rourke

It’s possible — just possible at this point — that a former Santa Fe Prep tennis star and soccer player could be the next first lady of the United States.

Amy Sanders O’Rourke was just known as Amy Sanders growing up in Santa Fe in the ’80s and ’90s. But she’s been propelled into the national spotlight by her husband, Beto O’Rourke, who announced this month his candidacy for the Democratic nomination for president.

“She played soccer and tennis, and in the summer, she worked on our farm near Lamy,” her sister, Dr. Christina Sanders Manice, said in a recent telephone interview. “She loved horseback riding. That was one of her favorite things.”

Manice, 31, is six years younger than Amy. Born in Chicago, Amy moved with her family to Santa Fe when she was 3 years old, her sister said, and lived in the city until she went to college.

Ralph Bolton, who still coaches the Prep tennis team, said in an interview, “She was a good athlete, but more importantly, she’s a hard worker. She was very focused in almost everything she did.”

Bolton noted that in Amy’s senior year, 1999, she and her tennis partner, Katherine Tucker, then in eighth grade, placed second in the state girls doubles championships.

Bolton also was hired by the Sanders family to teach her skiing. He also served as a house-sitter for the family.

A recent story in the Washington Post said, “Amy was a born competitor, playing to win in everything she did, from varsity tennis, to family board games, to bobbing for apples at a college party.”

Indeed, her name would frequently appear in The New Mexican’s sports section between 1995-99.

“She was my idol when I was growing up,” said Manice, a pediatrician in New York. “She was kind and hardworking. And she was always spending time with me.”

Amy went off to college — enrolling in Williams College in Massachusetts, where she earned a bachelor’s degree in psychology — when Christina was in sixth grade. The sisters kept in touch. “Every time she came home, she’d spend time with me,” Manice said.

After college, Amy moved to Guatemala for a year, where she taught kindergarten. In 2004, she moved to El Paso, where her family had moved. She began working at Centro de Salud Familiar La Fe, a health center located in South El Paso in the El Segundo Barrio neighborhood. She also taught first and second grades at the El Paso Country Day School.

“Education always was her passion,” her sister said.

Soon after Amy moved to El Paso, her aunt set her up with her future husband. Their first date was in a bar in Juarez. The Washington Post identified it as Martino’s. The El Paso Times, in a recent feature about her, said it was the Kentucky Club. “A Mexican crew filming a commercial in the bar tried to get the couple to kiss on camera, and Beto got them out of it by saying Amy was his sister,” the Post story said.

“They went on their first date and were pretty much head-over-heels in love,” Manice said. “Four or five months later, they were engaged.”

The O’Rourke and Sanders families already were acquainted.

According to the Post story, Amy’s dad, real estate developer William Sanders, took Beto’s mom, Melissa Martha Williams, out on a double date with another couple in Radium Springs in 1970. The other couple was Beto’s father, El Paso politician Patrick O’Rourke, and a woman whose name has been lost to history.

Patrick O’Rourke and Williams married less than a year after they met in Radium Springs. Sanders would later marry Louann Feuille, with whom he would have Amy and Christina (Manice) and their siblings Marianna, Richard and Pablo.

Manice recalls meeting her future brother-in-law in early 2005. “I was still in high school, a junior,” she said. “I thought he was extremely nice. He made an effort to be friendly.”

Earlier in 2005, Beto had begun his political career, winning a seat on the El Paso City Council, where he served until 2011. The next year he’d run for the first of his three terms in the U.S. House of Representatives.

When Beto began his first term in Congress in 2013, Amy took over the Stanton Street Technology Group, a company founded by her husband. She sold her stake in the company in 2017, when Beto began running for the U.S. Senate.

That Senate race — in which Beto lost to Republican incumbent Ted Cruz by less than 3 percentage points in deep red Texas after raising an astonishing $80 million in campaign funds — made Beto a national figure.

Manice said she realized that one day while in New York’s Central Park wearing a “Beto” T-shirt. A woman recognized the name and came up to her, saying, “Oh, Beto!”

However, the election defeat reportedly left Beto in a “funk” that prompted him to take a road trip on which he drew energy from the people he met and, according to the Post, on one stop in New Mexico “by eating New Mexican dirt said to have regenerative powers. (He brought some home for the family to eat, too.)”

Although the story doesn’t identify the source of the dirt, in a Jan. 25 blog post on his visit to Taos Pueblo, Beto wrote, “I left the Pueblo heading south toward Chimayo, aiming to be back in El Paso by bedtime.” Chimayó, of course, is home to El Santuario de Chimayó, where believers have long taken dirt supposed to have healing powers, though more often rubbing it on themselves than ingesting it.

Politics was never a major interest of Amy’s, Manice and Bolton said. When she was in high school, neither ever imagined that politics would become a major part of her life.

A representative of Beto’s campaign said the candidate’s wife wasn’t available for an interview last week. But she told the Post that the Senate run had been hard on their three children. However, the story also said that after O’Rourke’s defeat, “even friends who knew she didn’t care for political life weren’t surprised to see her jump back in; she hated losing that much.”

Beto recently apologized after drawing criticism for a comment he made while campaigning in Iowa, where he said his wife had raised their three children “sometimes with my help.” The candidate said it was meant as a joke but called it a “ham-handed” attempt to highlight her work and said he wouldn’t make the remark again.

Manice, asked what would it be like to have her brother-in-law win the presidency — and her sister become first lady — responded, “It’s very surreal. It’s hard to even entertain the thought, it’s so surreal. Such a wild idea.”