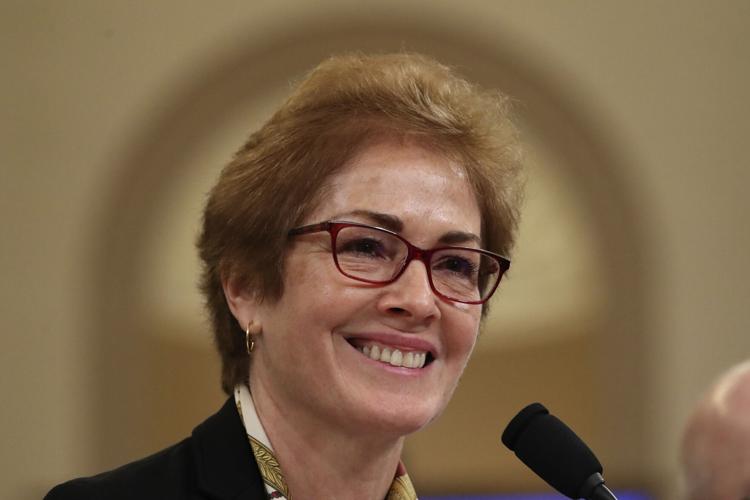 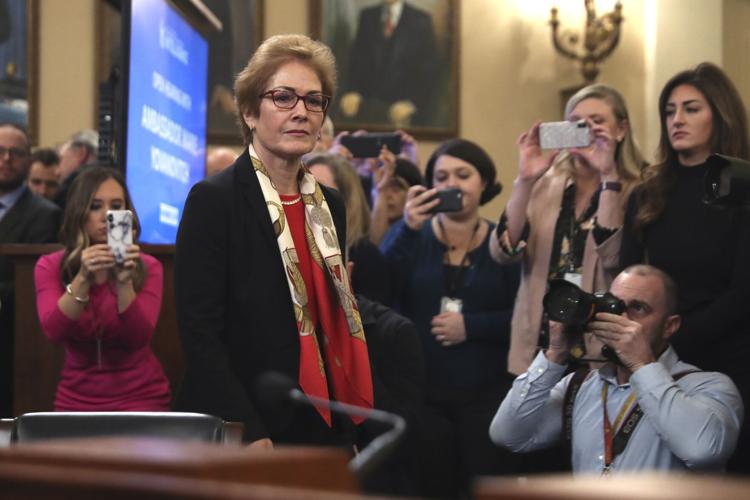 Former U.S. Ambassador to Ukraine Marie Yovanovitch arrives on Capitol Hill in 2019 to testify in President Donald Trump’s impeachment hearing. She is speaking Wednesday in Santa Fe about her new book, Lessons from the Edge.

Former U.S. Ambassador to Ukraine Marie Yovanovitch arrives on Capitol Hill in 2019 to testify in President Donald Trump’s impeachment hearing. She is speaking Wednesday in Santa Fe about her new book, Lessons from the Edge.

Marie “Masha” Yovanovitch describes feeling complex emotions about Ukraine, the country where she spent a fateful three years as a U.S. ambassador.

She has a strong, personal connection to Ukraine and its people, who are suffering the ravages of the unprovoked war Russia is waging as President Vladimir Putin seeks to recapture some Soviet-era dominance in the region.

Ukraine also became a political battlefield for Yovanovitch, 63, who was drawn into shadowy machinations that made her the target of a smear campaign, thrust her into an unwanted spotlight and abruptly cut short

her mission to help the country solidify its democracy.

That led to her scathing testimony in former President Donald Trump’s first impeachment.

Yovanovitch, now retired, observes Ukraine from U.S. shores rather than working as a diplomat within its borders. But she is painfully aware of the deep wounds Russia is inflicting on a nation seeking to move beyond its tumultuous past.

She lived and worked in Kyiv, which has been under constant siege, and knows Ukrainians who have become casualties of the Russian onslaught.

“There’s that saying that when many people die, it’s a statistic. When one person dies, it’s a tragedy,” Yovanovitch said in a phone interview. “That’s what it’s like for me, and what it’s like for every Ukrainian who knows somebody who’s been killed in this war of choice by Putin.”

Yovanovitch will talk about her 33-year foreign service career, world politics and her recently published memoir Lessons from the Edge at a Wednesday fundraiser for Global Santa Fe, a local nonprofit previously known as the Santa Fe Council on International Relations. The sold-out event will be held at La Fonda on the Plaza.

No victory for Russia

Despite Russia’s efforts to intensify the bombing, missile strikes and overall brutality, Yovanovitch said the world should prepare for a lengthy war, crediting Ukrainians’ fighting spirit and steely resolve.

“The Ukrainian people are not going to give up — we’ve seen that in terms of their morale, how they are fighting, their capabilities and their successes,” Yovanovitch said. “I think ultimately the Russians will be defeated, but it’s going to take some time.”

When Russia might concede defeat is still an open question, she said. Although the exact death toll for Russian solders is unknown, it is thought to be higher in the first 2½ months of this war than in the decadelong Soviet Afghan War, she said.

Ukraine officials have estimated 25,000 Russian troops have been killed, though Russian leaders put the deaths closer to 1,300 as of late March. The Soviets suffered about 15,000 deaths in Afghanistan.

As a dictator, Putin is willing to absorb the losses, but they aren’t going unnoticed in Russia, Yovanovitch said.

Putin signaled on Victory Day the war wasn’t going his way, she said, referring to Russia’s yearly May 9 celebration of the Soviets defeating the Nazis.

Some experts speculated Putin would use the day to proclaim a victory over Ukraine, announce the annexation of Donbas in the east and declare the invasion a war instead of a “special military operation,” which would trigger a national military draft.

But none of that happened, Yovanovitch said.

The U.S. and other countries supplying weapons and security systems have helped Ukraine fend off the invaders, but the Ukrainians themselves are in the caldron, standing up to relentless assaults and mounting atrocities, she said.

As horrible as the devastation is to watch, the Ukrainians are the ones who decide whether to carry on, and so far they are unwavering, even in the face of civilians being killed in Bucha and Mariupol, Yovanovitch said.

“What we’re seeing is a hardening of Ukrainian will,” she said. “Certainly the people I talk to in Ukraine are furious.”

Some analysts blame NATO’s post-Cold War expansion, which reeled in many former Soviet Eastern Bloc countries, for spurring Putin’s aggression against Ukraine, a country he deems a Russian appendage and not an independent nation that should ever join Western alliances such as NATO.

NATO co-opting countries the Kremlin once controlled aggravated Putin’s long-simmering anger about the Soviet Union’s collapse, which he has called the greatest tragedy of the

Putin bemoaning the Soviet Union’s demise has been a big factor in his push to rebuild at least some of the old empire since he came into power two decades ago, she said.

But the growing antagonism between Russia and NATO stems from Putin’s autocratic aversion to democracy and desire to expand his sphere of power, not from the West throwing salt on the wounds, Yovanovitch said.

The West didn’t engage in a spirited victory day to celebrate the Cold War’s end, instead offering Russia economic aid and help in safeguarding and eliminating nuclear weapons as part of deescalating the arms race, she said.

Russia was invited to become the eighth nation in the G-8 and participated in some of NATO’s major military exercises. Putin and NATO leaders also met for years to discuss issues of concern.

“We made a lot of effort to include Russia in the community of nations after the fall of the Soviet Union,” Yovanovitch said. “There were some people imagining that Russia ultimately would join NATO.”

But from the start, Putin showed a penchant for ruling with an iron fist, cracking down on any perceived opposition, both in Russia and in territories he still considered within his control, she said.

He carpet bombed Chechnya in 1999 and ordered Russia to invade Georgia in 2008.

In 2014, Russia illegally annexed Ukraine’s Crimean Peninsula and instigated the armed conflict in the eastern region between separatist rebels — whom the Kremlin backs — and the Ukrainian government, Yovanovitch noted.

If the West is guilty of anything, it’s not taking a stronger stance against these aggressive actions, which emboldened Putin and made an all-out invasion of Ukraine more likely, Yovanovitch said.

Putin was banking on Ukrainian President Vladimir Zelenskyy being a weak leader, the West being too divided to oppose the attack and the Russian military prevailing, Yovanovitch said. He was wrong on all three counts, she said.

It’s important now for nations to band together and make it clear to Putin that Russia doesn’t get to forcefully take Ukraine or any other neighboring country — otherwise, he’ll keep trying to seize more, putting the entire international order at risk, Yovanovitch said, adding, “This is a dangerous pattern, and it has to be stopped.”

Beginning of the end

Born in Canada and raised in Connecticut, Yovanovitch is the daughter of immigrants who fled a Soviet regime and later the Nazis.

In her memoir, she describes her strict but caring parents as instilling a sense of caution that made her a staunch rule-follower, a trait that would serve her well as a diplomat who had to comply with the foreign policies set by various administrations.

Her first foreign post was in Ontario in 1986, followed by stints in Moscow, London, Somalia, Kyrgyzstan and Armenia. Her first posting in Ukraine was from 2001 to 2004 as a deputy chief in the U.S. Embassy.

President Barack Obama appointed her as U.S. ambassador to Ukraine in 2016, and she began carrying out anti-corruption initiatives backed by Democrats and Republicans.

Her efforts earned her enemies, including Ukraine’s chief prosecutor, Yuriy Lutsenko, who was supposed to be an ally in fighting corruption.

Instead, Lutsenko stalled anti-corruption efforts on his end and was later accused of undermining the Ukrainian bureau investigating those crimes.

He also teamed up with Rudy Giuliani to find incriminating evidence on Trump’s political rival Joe Biden and his son, Hunter, who had business dealings in Ukraine. In a reported quid pro quo, Lutsenko agreed to investigate the Bidens if Giuliani could find a way to get rid of Yovanovitch.

By all accounts, Giuliani and his associates led a smear campaign against Yovanovitch, claiming she bad-mouthed the president to foreign leaders, defied his orders and told Ukrainian officials who they could prosecute.

The allegations shocked her longtime colleagues who knew her as a steadfast professional who was always neutral and never voiced political opinions.

Trump allies vilified her, calling her disloyal and corrupt, and amped up the pressure to have her fired. In April 2019, Trump ordered Yovanovitch removed from her Ukraine post.

Later, during his infamous phone call with Zelenskyy, Trump called Yovanovitch “bad news” and said she’s “going to go through some things.” This was the conversation in which Trump asked Zelenskyy to look into Joe Biden.

Testifying to Congress during the impeachment inquiry, Yovanovitch said she was “shocked and devastated” that Trump would disparage her like that to a foreign president.

She told lawmakers she expected shady Ukrainian interests would dislike her anti-corruption efforts, but she never thought they would find Americans to partner with to oust a U.S. ambassador. Suddenly, following the rules and doing her job made her a liability, she said.

In her interview with The New Mexican, Yovanovitch said she understood a president can recall an ambassador at any time, but there was no reason to tarnish her reputation.

She said beneath her stoic public face during this dark period was a swirl of emotions — she was angry, afraid, bewildered and disappointed. And she felt betrayed by her bosses who refused to defend her.

“I had done nothing wrong and yet I was being removed from office, and it was a smear campaign,” Yovanovitch said.

When Trump was elected, she had hoped he would let the established diplomatic apparatus run in places like Ukraine without meddling, she said.

Then came the 2018 Helsinki summit in which Trump went into a closed-door meeting with Putin.

When they emerged, Trump told the gathering Putin denied Russia interfered in the 2016 elections, and he believed him, even though U.S. intelligence said otherwise.

Yovanovitch wrote in her book this display unsettled her so much she couldn’t finish her french fries. When asked about this passage, she elaborated.

“An American president toadying up to a Russian president,” she said. “Trump was willing to take Putin’s word for it over our intelligence services, publicly. I found that shameful, disturbing, and I wondered what would come next.”

Little did she know her ouster would come the following year.

After she lost her ambassadorship, she became a State Department fellow at Georgetown University. Then after testifying in impeachment hearings, she decided it was time to part ways with the agency.

“I felt like I was leaving on my terms, rather than being hounded out by forces not friendly to me,” Yovanovitch said. “I think I served the people of the United States well. I also brought some good to the countries in which I served.”