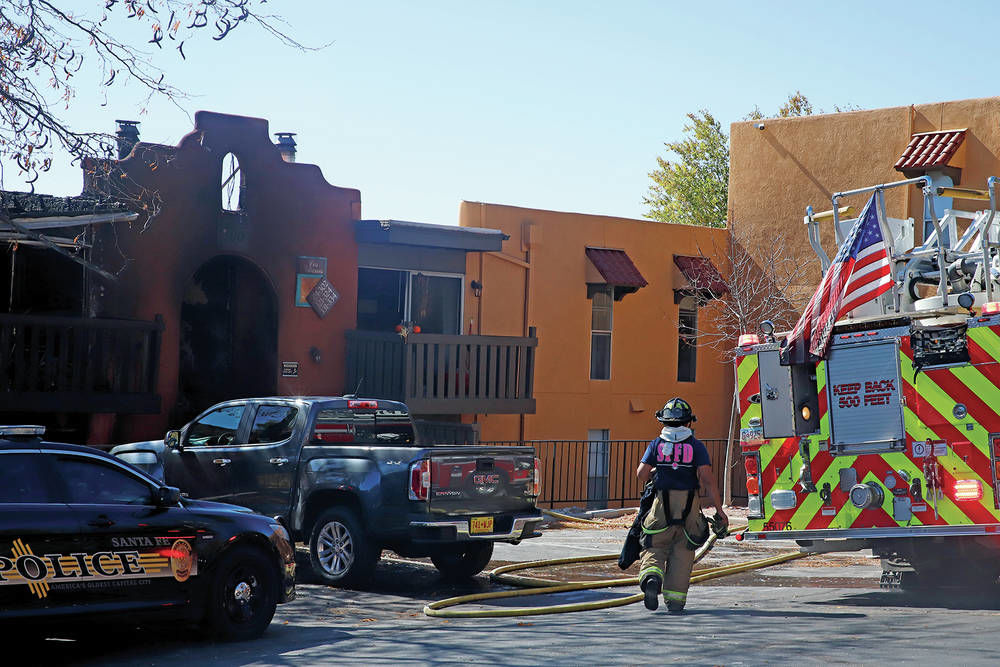 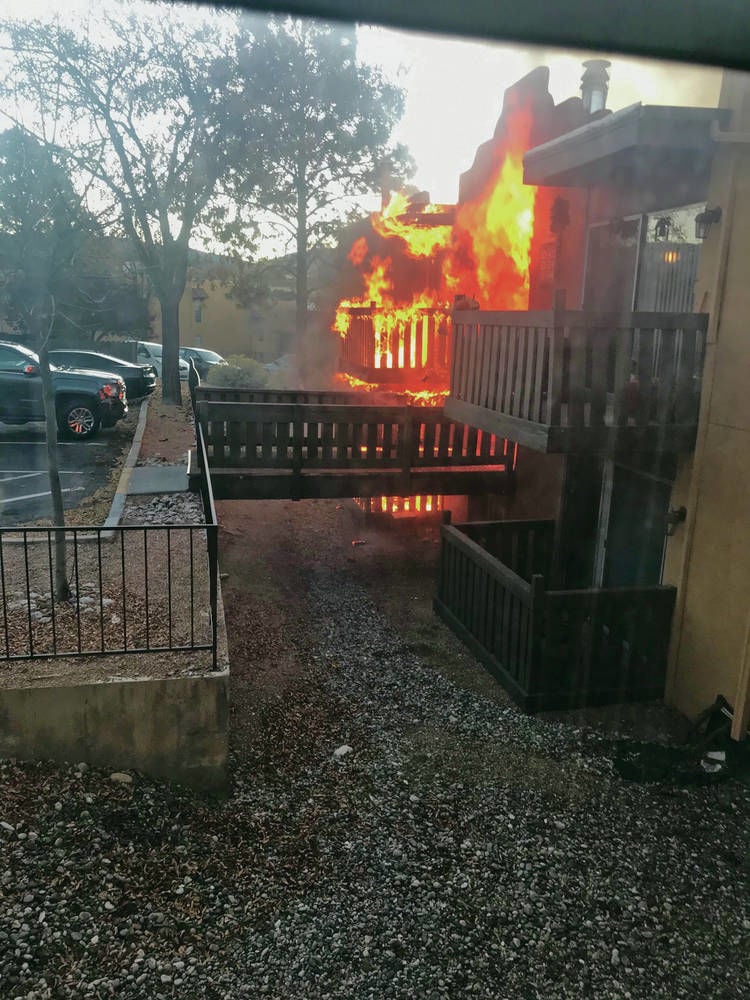 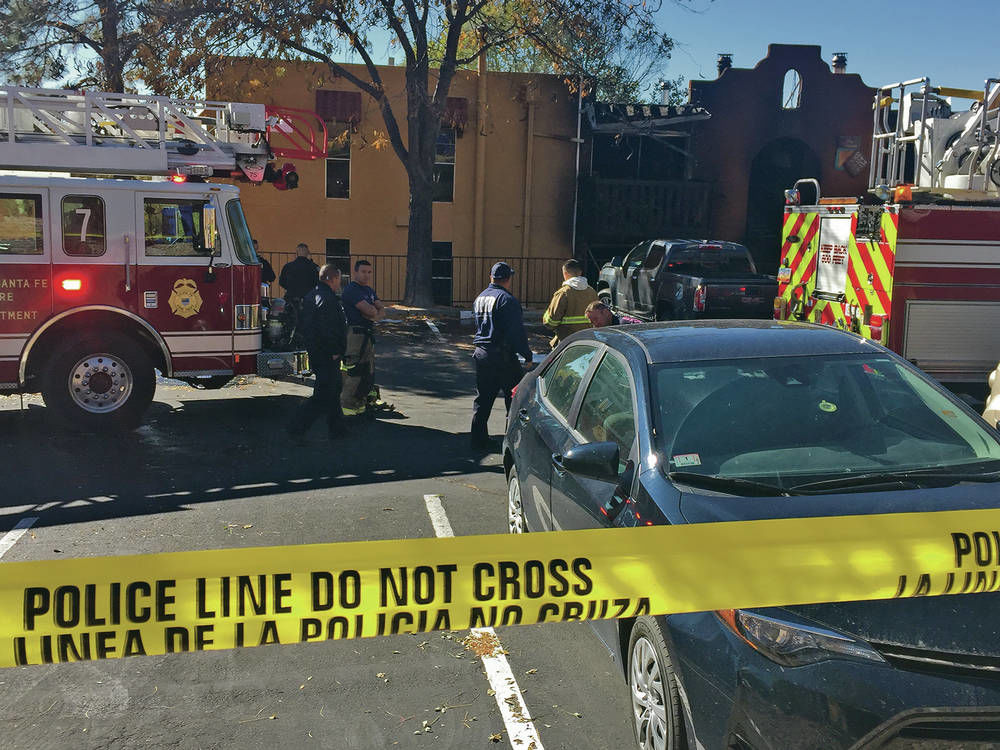 Five former tenants of Los Piñones Apartment Homes are suing the complex’s owners and some employees over a devastating fire in 2019, alleging they had failed to address the deteriorating mental state of a resident who ignited the blaze in an act of suicide.

The lawsuit, filed earlier this week in state District Court, also accuses Los Piñones of allowing Gloria Lucero Buschman to continue living in her apartment unit despite an eviction petition it had filed against her, and it claims a lack of smoke detection equipment and portable extinguishers is partly to blame for the fire’s rapid spread.

Police and fire department reports of the incident, on the morning of Oct. 26, 2019, said investigators found Buschman’s body in a back bedroom of her apartment and a suicide note after the fire, which destroyed two units and caused smoke damage to six, displacing seven families.

A neighbor had reported seeing Buschman, 59, sitting on a burning couch in her apartment surrounded by flames. But she refused to leave.

Representatives from Los Piñones Apartment Homes, at 825 Calle Mejia, could not be reached for comment on the lawsuit.

Michelle Aucoin, an attorney representing the tenants, also could not be reached.

The complaint describes a harrowing ordeal as the tenants awoke to apartments filled with smoke, burning walls and melted doorways.

“Some plaintiffs never heard the sound of their own smoke alarm, and some could only hear the faint beeping of an alarm not associated with their apartment,” the lawsuit says.

While no tenants were severely injured, their lives were disrupted by the fire. Cynthia Cornelsen told The New Mexican in November 2019 that she and her husband, Kale Blackmon, who had lived in the unit directly above Buschman, lost everything.

The three other plaintiffs are Matthew Horn, Sherrod Maxwell III and Elizario Romero.

They are accusing Los Piñones Apartment Homes and its parent companies of negligence, breach of contract, trespassing, violations of landlord-tenant laws and other allegations. Their complaint seeks punitive damages and attorney’s fees.

They later learned insurance agents and part of a restoration team hired by the complex had gone in and out of their apartments without permission, even tampering with personal belongings, according to the complaint.

According to the lawsuit, Buschman signed a lease for her apartment in June 2017. By March 2018, Virtu Investments had filed a petition to evict her for failing to make three rent payments.

But she was never evicted.

The lawsuit says the plaintiffs “experienced disturbing contact” with Buschman, who would knock loudly on doors, asking for help, and raised concerns with her “increasingly loud, distressed screaming and banging on the walls.”

Maxwell, her next-door neighbor, described her as “extremely anxious.”

In June, July and August of 2019, Buschman received notices of past-due rent, the lawsuit says, and by September, the apartment was given legal grounds to evict her no later than Oct. 16, 2019.

When the day came, a manager called police to report that Buschman had been threatening other tenants, the lawsuit says. But when police arrived, the manager dismissed the complaint and asked them to leave.

Buschman was given a notice to vacate her apartment on Oct. 18, to no avail.

During this time, the suit says, her behavior seemed to escalate. Maxwell heard outbursts of screaming, yelling and banging on the wall they shared.

According to the suit, Lucero, the on-site manager, told Horn he should “feel empowered to call the police” and informed him that without a report, there was nothing she could do.

The suit says in a message to Maxwell on Oct. 25, Lucero said, “We are well aware of the situation. … She has a psychiatric history. She also has a history of drug use and addiction issues. She argues with her social worker. … We did have an appointment scheduled for her removal but the Manager didn’t do it.”

The suit says Cornelsen and Blackmon attended a party that same day in one of the building’s apartments, where the couple and their neighbors agreed they would speak with complex managers again the following day about Buschman and their fears for everyone’s safety.

But the opportunity never came.

Around 7:30 a.m. the next morning, Buschman’s unit was engulfed in flames.

These folks have every right to sue on this. It wasn't as if this lady didn't show a danger and management was aware of it. Not only did you all suffer losses but this woman lost her life. There was plenty of signs that she was in serious need of mental care and should have been commited for testing and help. Why was that not done?