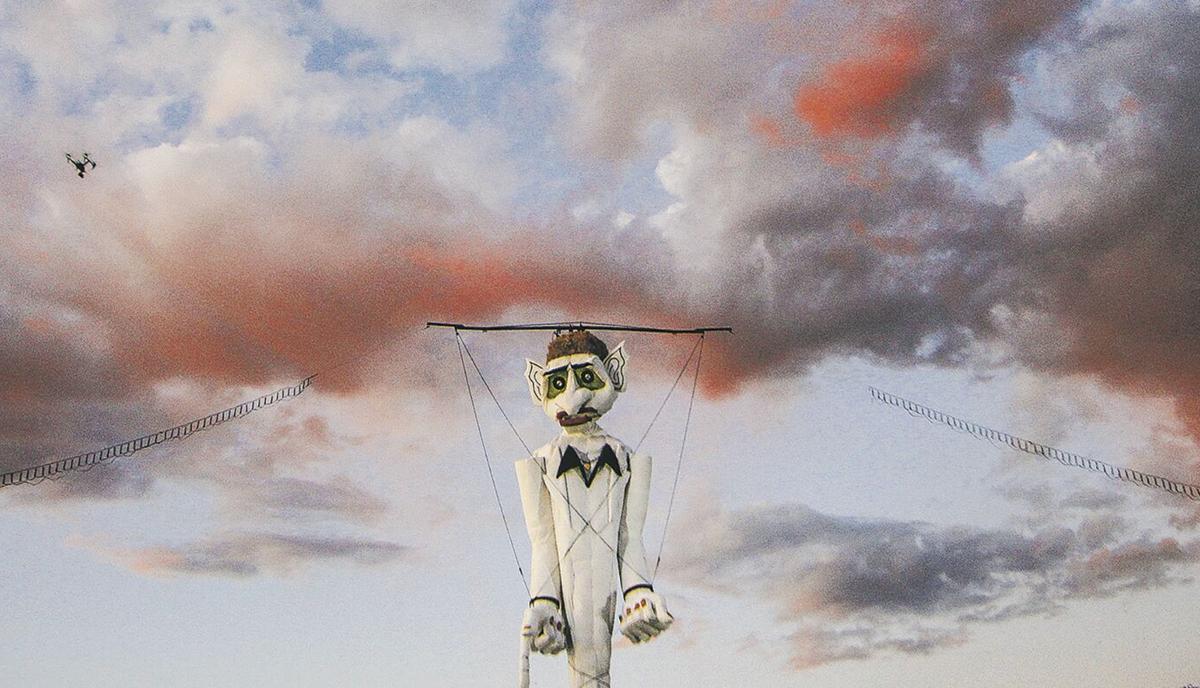 Zozobra hangs in position for last year’s burning. This year’s Old Man Gloom will meet his fiery fate at Fort Marcy park, but viewers are asked to stay away from the venue. Police will begin closing down nearby roads to both vehicle and pedestrian traffic early in the day. 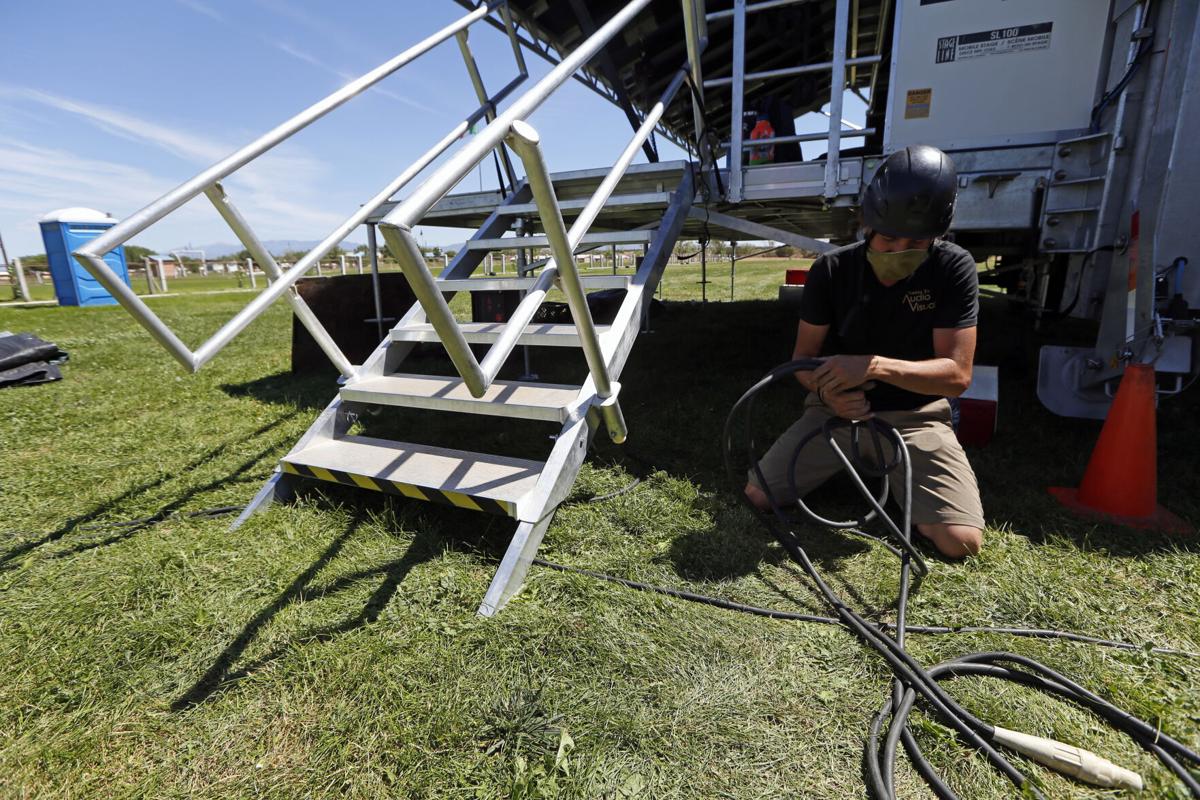 Caleb Garvin, with Santa Fe Audio Visual, runs a power cable from a generator to the stage at HIPICO Santa Fe on Thursday as he helps prepare for Friday’s Zozobra drive-in watch party. 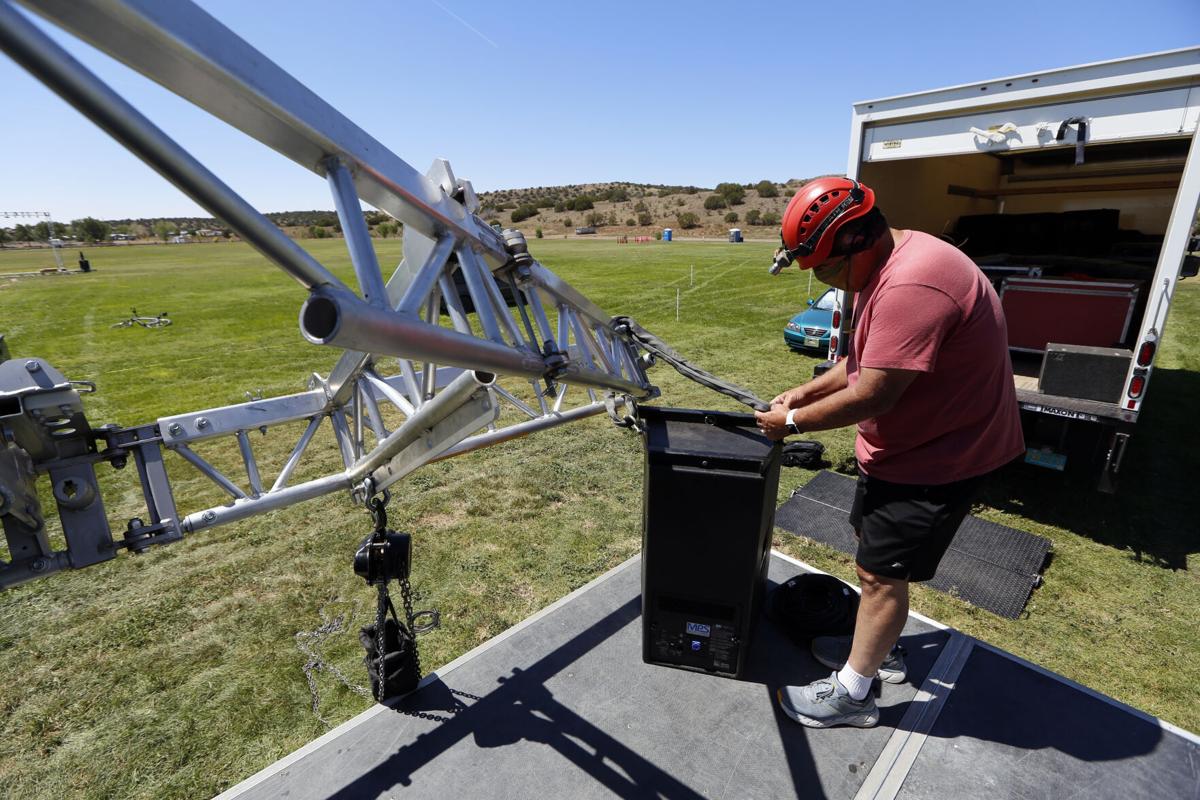 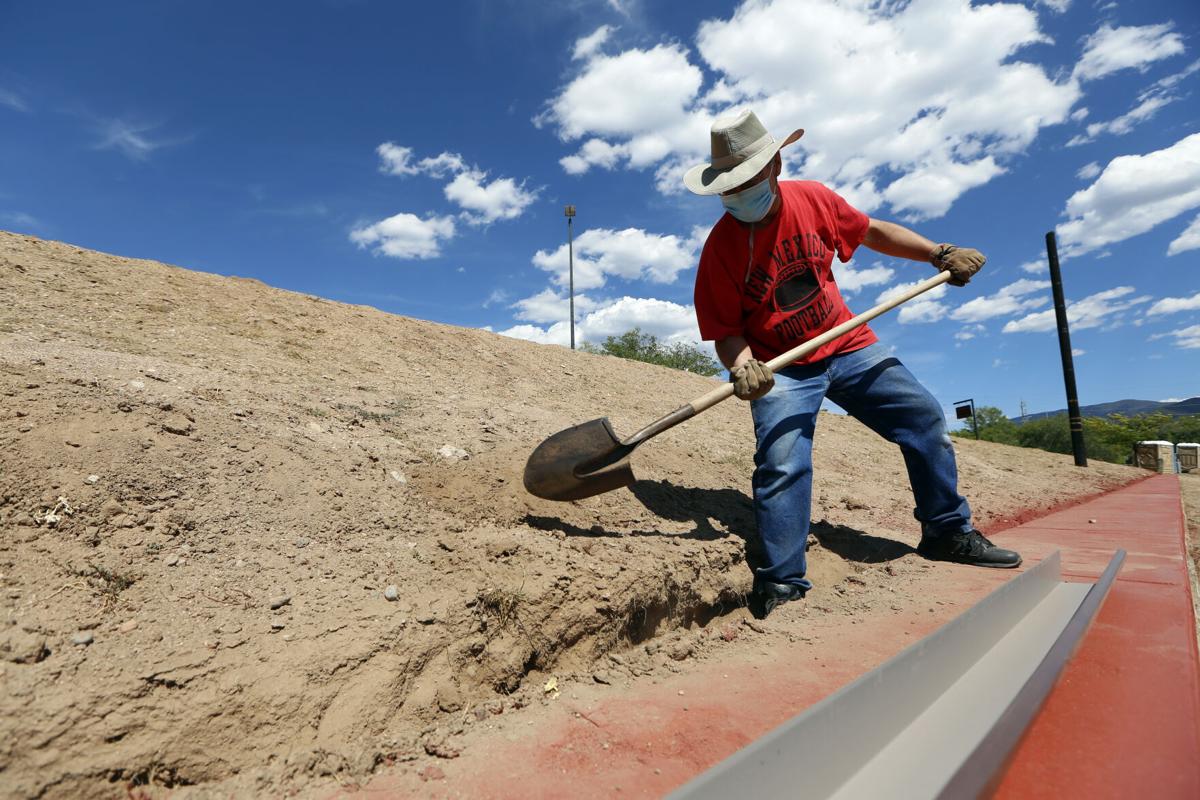 Gary Padilla, a volunteer with the Kiwanis Club of Santa Fe, digs a trench at Fort Marcy park on Thursday for pyrotechnics that will go off during the annual burning of Zozobra. 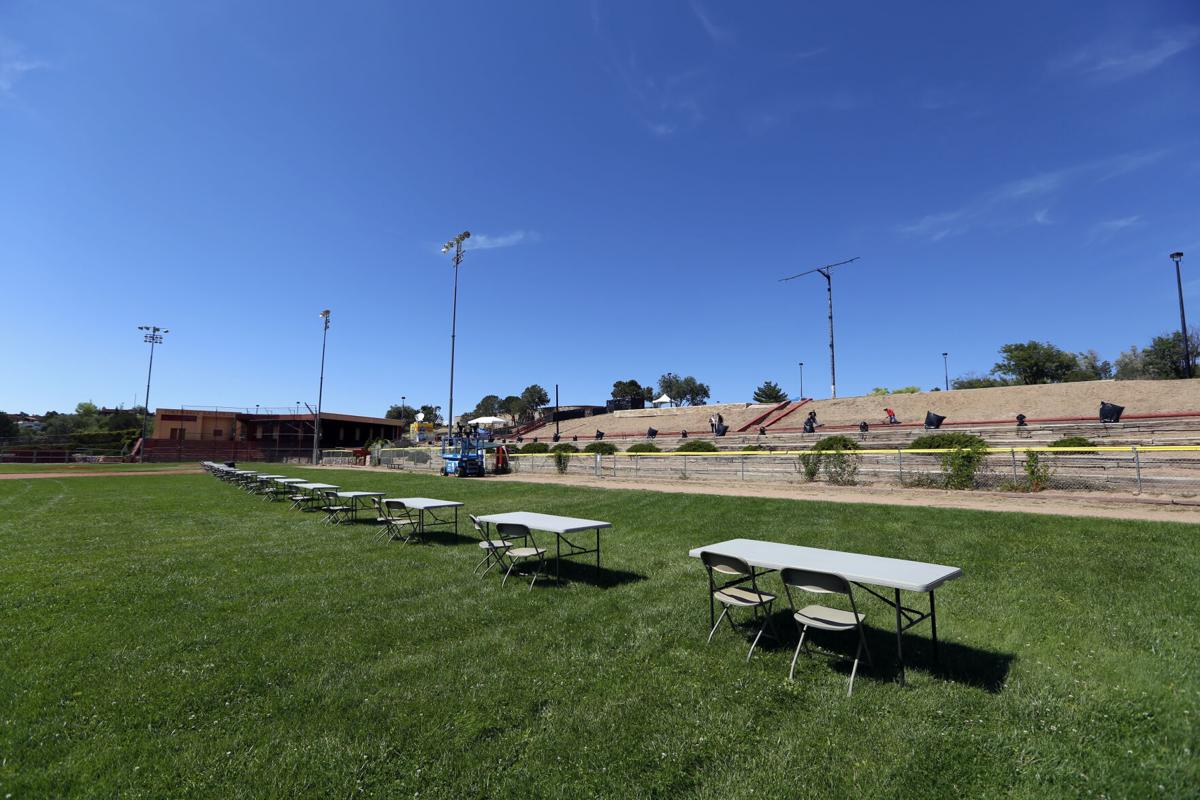 Socially distanced tables for media and special guests were put in place Thursday at Fort Marcy park. Members of the public will not be allowed to attend the event in person.

Zozobra hangs in position for last year’s burning. This year’s Old Man Gloom will meet his fiery fate at Fort Marcy park, but viewers are asked to stay away from the venue. Police will begin closing down nearby roads to both vehicle and pedestrian traffic early in the day.

Caleb Garvin, with Santa Fe Audio Visual, runs a power cable from a generator to the stage at HIPICO Santa Fe on Thursday as he helps prepare for Friday’s Zozobra drive-in watch party.

Gary Padilla, a volunteer with the Kiwanis Club of Santa Fe, digs a trench at Fort Marcy park on Thursday for pyrotechnics that will go off during the annual burning of Zozobra.

Socially distanced tables for media and special guests were put in place Thursday at Fort Marcy park. Members of the public will not be allowed to attend the event in person.

Even in a year when large crowds can’t gather for public events, Zozobra can’t get a break.

The massive bogeyman marionette will burn Friday — COVID-19 be darned — as he has in late summer every year since 1924.

The Kiwanis Club of Santa Fe, which has organized the event since the early 1960s, will ensure the 96th burning of Will Shuster’s Zozobra goes on at Fort Marcy park, with viewers tuning in to a live television broadcast or watching a livestream.

The Kiwanis Club has partnered with KOAT-TV for an 8-to-10 p.m. broadcast of the burning, set to ignite at 9 with the usual pageantry and flourishes — including a fireworks display. The first hour of the show will be dedicated to a look back at the history of Zozobra, first crafted by Shuster.

Fans of the annual burning also have an option of watching Old Man Gloom’s demise from large, high-definition screens erected at HIPICO Santa Fe, an equestrian center southwest of the city. That drive-in celebration includes live music by two bands, Cuarenta y Cinco and Severo y Grupo Fuego. Doors open at 4 p.m. and music starts at 6:30. Tickets for the celebration range from $49 to $110 per carload.

A sales representative for AMP Concerts, which is hosting the watch party, said sales have been “steady.”

Organizers of the live burning are asking fans for a favor: Don’t show up at at Fort Marcy park.

“We need citizens’ cooperation to stay away from the venue, and I know that’s tough, especially for teenagers who have been cooped up all summer,” said lead organizer Ray Sandoval said. “Please don’t attempt to come to the venue. We’re not doing this to be mean. We’re trying to avoid a superspread of the virus. We don’t want anyone to get sick.”

Noting Santa Fe police officers will be out in force around the burning site Friday, Sandoval said, “It’s gonna be a very gloomy night for somebody who tries to show up.”

Lt. David Webb of the Santa Fe Police Department said officers will begin closing down nearby roads to both vehicle and pedestrian traffic early in the day. Those closures will include Bishops Lodge Road, Old Taos Highway and surrounding neighborhood streets, he said.

In addition, Webb said, public parking will be prohibited on those streets, and downtown parking spots, including around the Plaza, are going to be closed to discourage traffic and visitors.

Tow trucks will be on hand to haul away offending vehicles, he said.

“Stay home and enjoy a different type of experience,” Webb said. “This will be one to remember, with some of the best live shots you may see.”

An aerial drone will cover the event, catching and showcasing close-up footage of the burning, Webb said.

Zozobra’s fiery demise, held to burn away the city’s gloom, has never been canceled, not even during World War II.

The marionette has grown over the years, from about 18 feet tall in the 1920s to about 50 feet in recent times. Over the decades, his appearance has changed to reflect the life and times of his burning.

The Kiwanis Club had planned to pay tribute to the 1980s this year as part of its 10-year Zozobra Decades Project leading up to the event’s 100th anniversary in 2024. But the ’80s will have to wait.

Sandoval said the organization decided earlier this year to “save the 1980s for next year when we can all be together.”

The interruption in the Decades Project schedule will still allow the city to celebrate the 100th anniversary of Zozobra in 2024, he added.

This year’s Zozobra instead will be scorched with the novel coronavirus. Sporting a bow tie and silvery-gray hair, the bogeyman will wear representations of the virus made of ping pong balls and resin.

Zozobra first burned in an open field between what is now the main branch of the Santa Fe Public Library downtown and the current office of the Santa Fe Reporter. In an 1964 interview, Shuster said the location of the burning switched to the Fort Marcy park area in 1940.

Ticket proceeds for the show generally go to local nonprofits and education programs. This year, the Kiwanis Club charged people $1 to submit a gloom to be torched with Zozobra on Friday. Sandoval said Thursday some 68,000 glooms had been collected, and he expects more Friday before the first match is lit.

Hopefully, he said, “this time next year, we can all be together again.”

How to watch 96th burning of Zozobra

The burning of Zozobra will take place at Fort Marcy park on Friday, but the event will not be open to the public. Viewers can watch the show from 8 to 10 p.m. on KOAT-TV Channel 7 or view a livestream at koat.com. The first hour will provide a history of the event, how the marionette is made and how the Kiwanis Club of Santa Fe uses proceeds to make a difference in the community.

Fans also can attend a drive-in watch party at HIPICO Santa Fe, 100 S. Polo Drive. Tickets range from $49 to $110 per vehicle, with up to six passengers per vehicle allowed. Doors open at 4 p.m. Tickets must be purchased in advance at ampconcerts.org.

This sounds awesome, in a non corona year, I would love to attend this. Has this reporter ever attended?

This sounds like even more of a waste of funding and resources than usual - more a way for police to "be out in force," terrorizing the people and exerting force and control, than any form of community solidarity. Exclusion at its best, folks. For shame, Kiwanis. For shame.

It's not that serious. Y'all need to lighten up. Don't participate. We won't miss you.

Do not join the cultus. The 96th Zozobra is a chance to burn ideas on paper, instead of articulating an argument. In the year 1517 Luther published the First Principles of the Reformation, the Ninety-Five Theses, a treatise on secular authority. In the year 1520, the Edict at Worms ruled Luther a heretic, and the books burned. Today, the writing is still with us, because people stood against the church and saved the books. The ideas from Luther are democratic in theme that citizens are equal. Zozobra stands above the audience like a despot, a symbol of the Medieval corrupt 16th century Church.

I wrote, "If we do NOT join the cultus are we still welcome here". Note correction.

The Medio fire is uncontained. The pandemic is an issue. So let's burn. Who is Zozobra pointing at the audience? Is he gay, he has a friend named Tio Coco. Is he a bigot, anti-L.G.B.T., and non-inclusive? The urge to focus on this event to the detriment of the public is a disgrace. If we do join the cultus are we still welcome here? A figure of hate is not healing for the community. This lesbian does not join in your celebration.