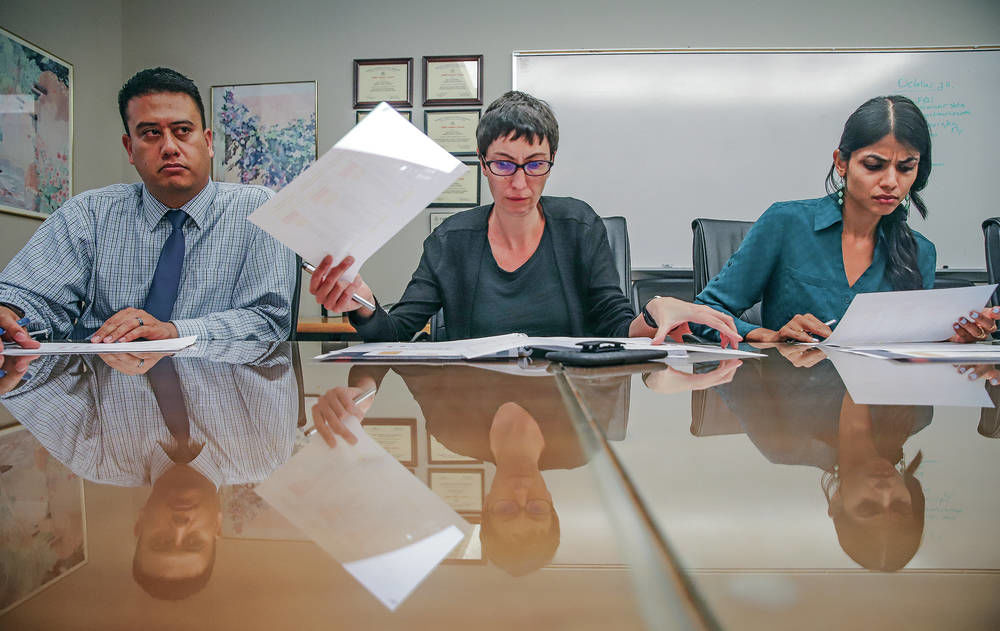 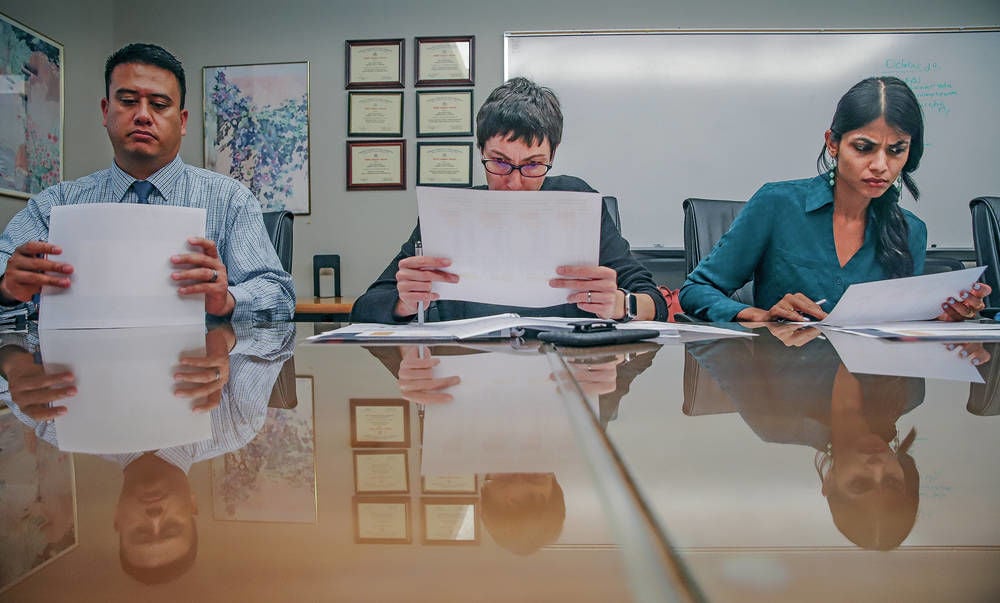 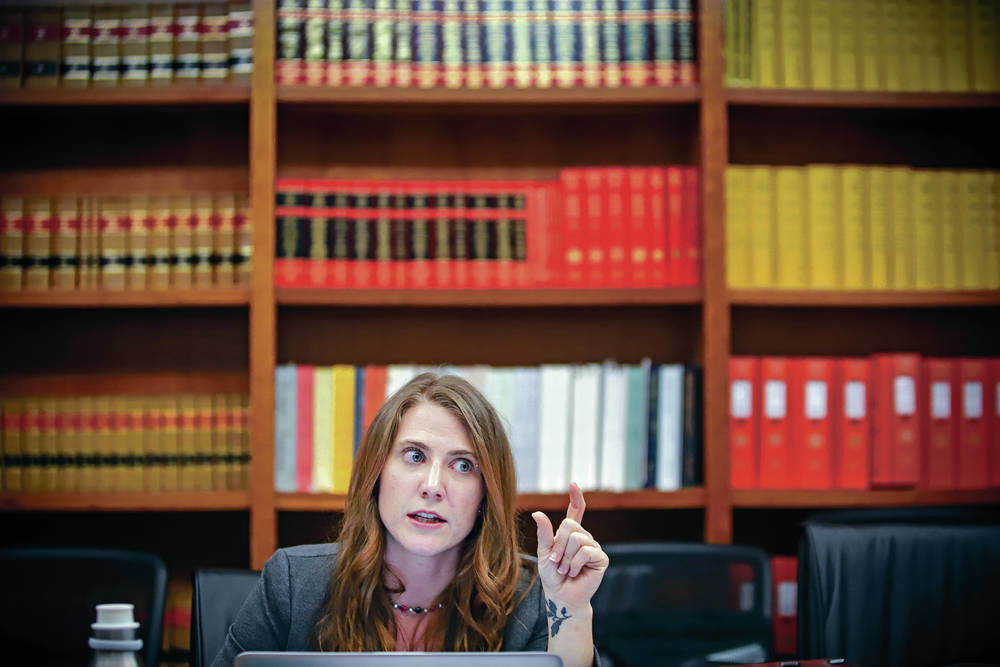 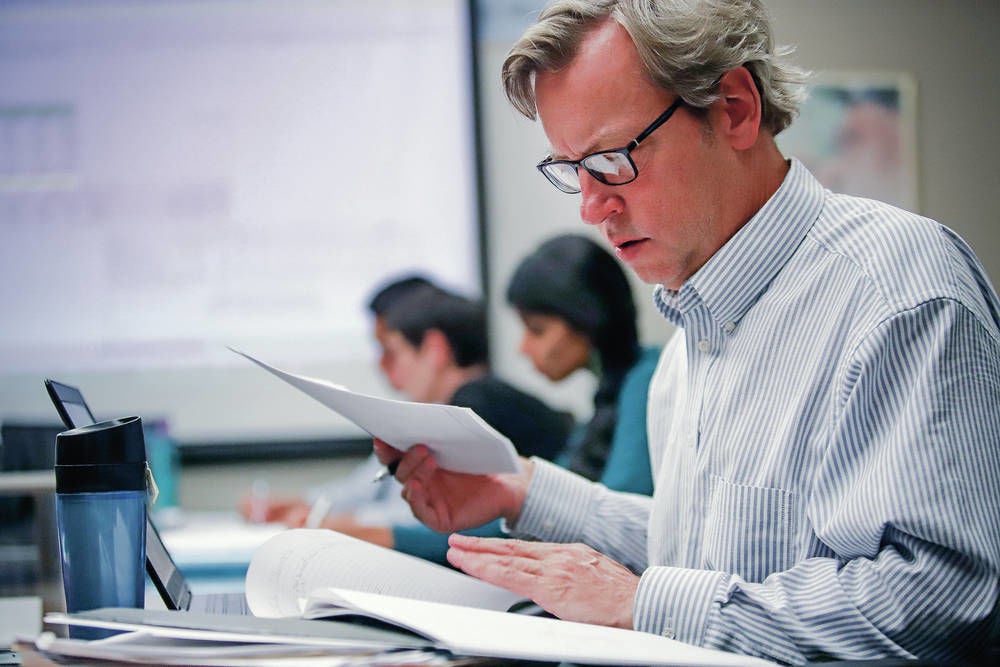 Stacks of documents for review.

Taken together, that’s the backdrop for eight economists who’ve been gathering in state government meeting rooms for the past several weeks. Accomplished and efficient and sometimes unnoticed, they are rarely written about in news stories — well known only to those few who understand just how tax money flows.

And yet the people at the table are among the most influential in the state because their work — they project just how much money New Mexico is likely to receive in coming years — is the basis for how government will spend its funds.

They’re known as “the revenue estimators.” Ten times over the past six weeks, these staff economists from three state departments and a legislative committee have convened to pore over troves of data, update economic models and debate complex calculations.

“Numbers, numbers, numbers,” said Taxation and Revenue Department senior economist James Girard, one of the eight at the table. “If you’re in these meetings, you better like numbers.”

This week in Red River, the estimators will emerge to unveil their highly anticipated product — financial projections lawmakers will use to draft a new state budget. Their report will almost certainly be popular: Officials say New Mexico’s revenue is likely to be higher than previous estimates. That could allow the next state budget to top the $7 billion threshold passed this year.

The estimators — whose official (and certainly more mundane) name is the Consensus Revenue Estimating Group, or CREG — have a task that’s far from easy, as they explained in a series of recent interviews that took The New Mexican inside their meeting process. They have to deal with the reality that economic forecasts are almost never spot on, and the inevitability that some lawmakers will be unhappy with them, even when economists take pains to be as diligent and objective as possible.

Additionally, there’s the weight of knowing these numbers will become the basis for budget decisions that affect New Mexicans far and wide. If the forecasts come in too low, they can constrain lawmakers’ ability to allocate funds to important programs. If they’re too high, the state may have to cut spending, which happened quite painfully amid a deficit three years ago.

That’s why New Mexico has long opted for a consensus-based process, which requires economists from both the executive and legislative branches to agree upon joint forecasts.

The process isn’t required by state law, and only about half of U.S. states use it, yet directors here say it inspires more confidence and avoids the friction that can arise if branches produce separate forecasts or if one branch does the work without the input of another.

The group excludes policy directors and Cabinet secretaries in a bid to avoid the pressures of politics.

“Ratings agencies trust your numbers more when it’s a consensus,” said Clinton Turner, director of tax policy at the Taxation and Revenue Department.

Still, with so much intelligence in one room — and with the final numbers affecting so many important decisions — there can be plenty of dissent before economists arrive at a consensus.

“Everyone brings their model and is expected to defend it,” Girard said. “The people in the room know each other pretty well, but there’s still contention.”

In fact, there have been years when economists have butted heads.

“It got bad enough at one point that they had to hire a facilitator,” said David Abbey, director of the Legislative Finance Committee. “Basically, an intervention needed to happen. Managers needed to weigh in and say we need to treat each other in a professional way. That wasn’t happening.”

This year, though, the group has found common ground. They performed stress tests on their forecasts during a final meeting this month, and two Cabinet secretaries and Dawn Iglesias, the LFC’s chief economist, will present them to lawmakers Wednesday in Red River.

“I think there’s been a lot of collegiality this go-round that’s been really refreshing,” Iglesias said.

There’s also some lightheartedness, which often comes in the form of economist jokes. Taxation and Revenue staff, for instance, quipped that it’s so hard to estimate corporate income tax, they might as well throw a dart at the wall.

“I have the dartboard in my office,” joked economist Robert McGrail, who is in charge of forecasting revenue from that tax.

Of course, this is no normal year for New Mexico revenue. As oil and gas production continues to surge in the Permian Basin, the state could collect a record $7.86 billion in revenue for fiscal year 2019, which would be $273 million above prior forecasts, according to a recent LFC report.

The percentage of revenue that comes from oil and gas is likely to increase in the new report from 35 percent to “closer to 40,” Abbey said.

“The revenue estimates are coming up,” Abbey said. “We produced more oil, the economy didn’t weaken and prices have held up. The estimates will be higher than what they were last December.”

Given the unprecedented revenue, lawmakers will be eager, if not giddy, to see the economists’ report in Red River this week.

First, estimates for fiscal years 2019 and 2020 will tell them how much excess revenue might be available that could either remain in reserves or be used for one-time expenditures in areas such as infrastructure.

The report also will include projected revenue for fiscal year 2021, which is the number lawmakers will use to draft a budget in January. The group will revisit its figures in another report in December.

Despite the record revenue, there are risks going forward.

While industry forecasts point to continued investment in the Permian, oil prices are volatile and affected by unpredictable factors from hurricanes to OPEC decisions to geopolitical developments in far-off places like Iran or Venezuela.

A severe drop in prices can lead companies to reduce drilling in the Permian. That happened in 2016, when the number of rigs operating in New Mexico dropped to 15 from 90 in a matter of three months.

And regardless of prices, a new well in the Permian loses around 75 percent of its production after its first year in operation.

“The probability of global economic slowdown and a national recession is definitely something we all consider,” said Leonardo Delgado, the Department of Finance and Administration’s chief economist and one of the CREG estimators. “That’s definitely a concern.”

They then bring their individual estimates to the group meetings to be peer reviewed. The economists often readjust their estimates based on the feedback they receive.

“For anyone in this business, there has to be humility about what you know or don’t know,” Abbey said. “Because you know what? A revenue estimator is always wrong.”

One thing that makes this task particularly challenging is that projections for the next budget period stretch almost two years into the future. And of course, a lot can change in that amount of time.

“The thing that’s hard about it is they’re not debating something that either side can prove in that moment,” said Taxation and Revenue Secretary Stephanie Schardin Clarke, a former revenue estimator.

What’s more, they don’t have a lot of time to draw their conclusions — not nearly the kind of time that a Ph.D. economist might have to complete an academic paper. And this year, the group was short-staffed at eight members; it’s had 12 in previous years.

As challenging as the internal CREG debates may be, they happen within the comfort of a conference room. Yet just one week after the group’s final meeting, representatives of each agency present the numbers to lawmakers — or, as one economist put it, “they go up in front of the firing squad.”

Legislators can question the legitimacy of the forecasts. Some will think they’re too low; others will say they’re too high.

“Over the years, there are probably days where hearings have been rough, where a forecast was met with skepticism or a forecast was bad and members are looking to figure out why that happened,” Abbey said. “Those conversations can be uncomfortable, but they’re necessary.”

And of course, there are disagreements among lawmakers. Fiscal conservatives tend to be cautious, while others want to spend more on needy areas like education.

“You have to have thick skin,” said Turner, who was a revenue estimator for 11 years.

Given the scrutiny and importance of the forecasts, economists say they do all they can to try to ensure the projections aren’t too high or too low. Overestimating revenue is the worse of the two scenarios.

“The fear that the professional economists in this group struggle with is the fear that revenue will come in low and the budget will be strained because of that,” Schardin Clarke said.

As Abbey put it, “There’s a saying in this business that they never fired a revenue estimator for being too low.”