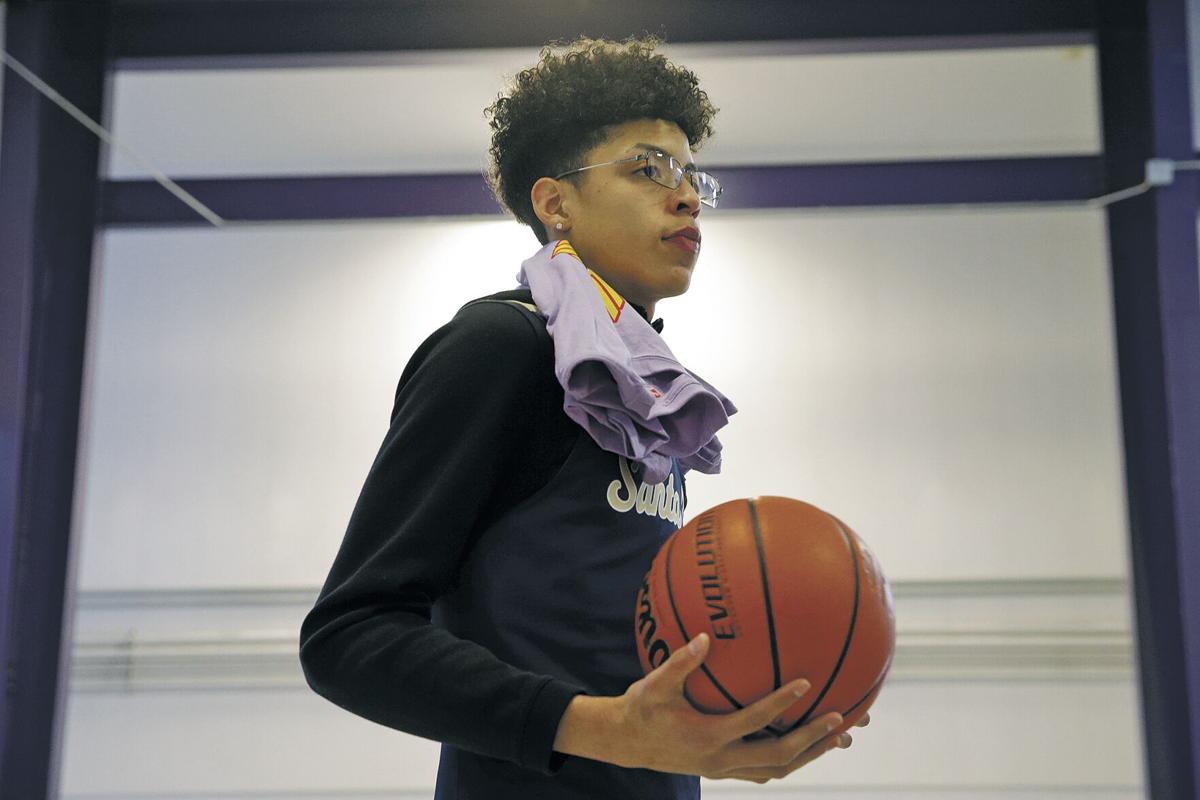 It's been a year since Santa Fe High basketball star Fedonta ‘JB’ White was fatally shot Aug. 1, 2020, while at a house party in Chupadero. 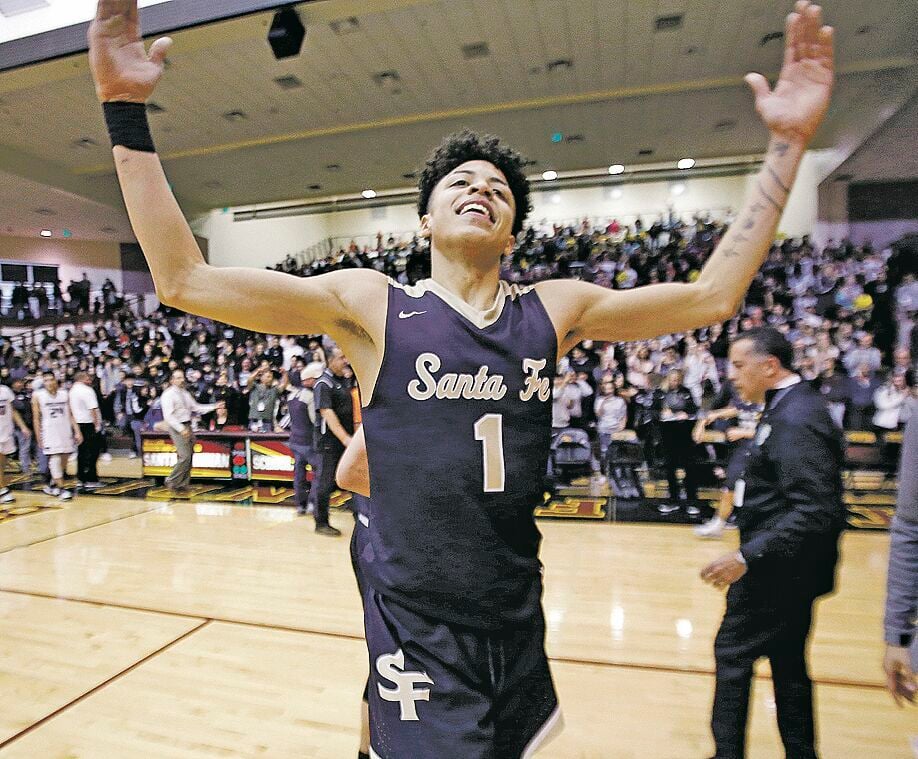 Fedonta ‘JB’ White celebrates in February 2020 after Santa Fe High beat Capital in a District 5-5A playoff game. It’s been a year since the death of the prep basketball star. 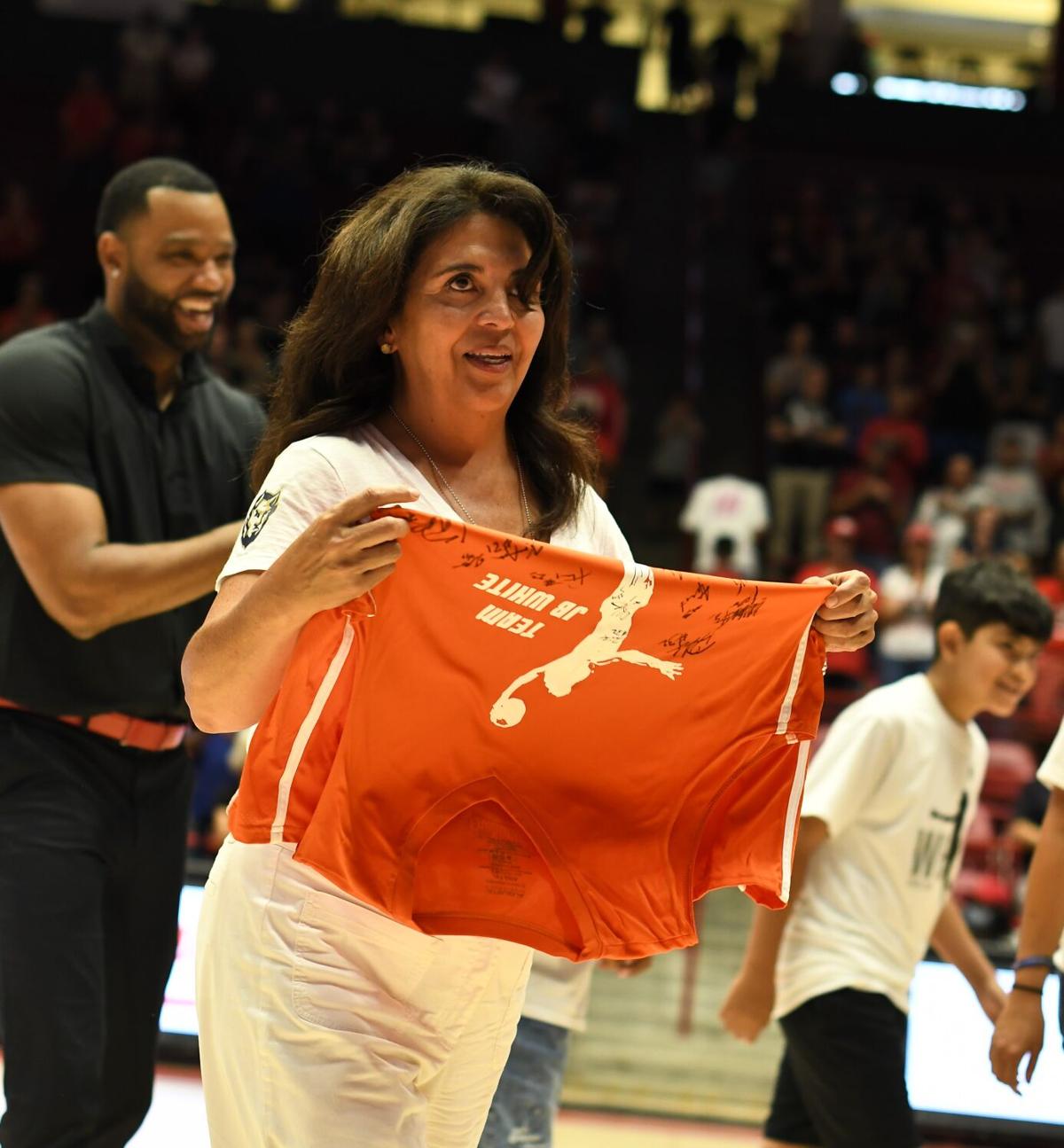 Jude Voss carries the Team JB White jersey given to her by New Mexico Enchantment Alumni Game organizer Brandon Mason, left. Voss was an assistant coach for the team, which was named for her grandson, who was shot and killed in August 2020. 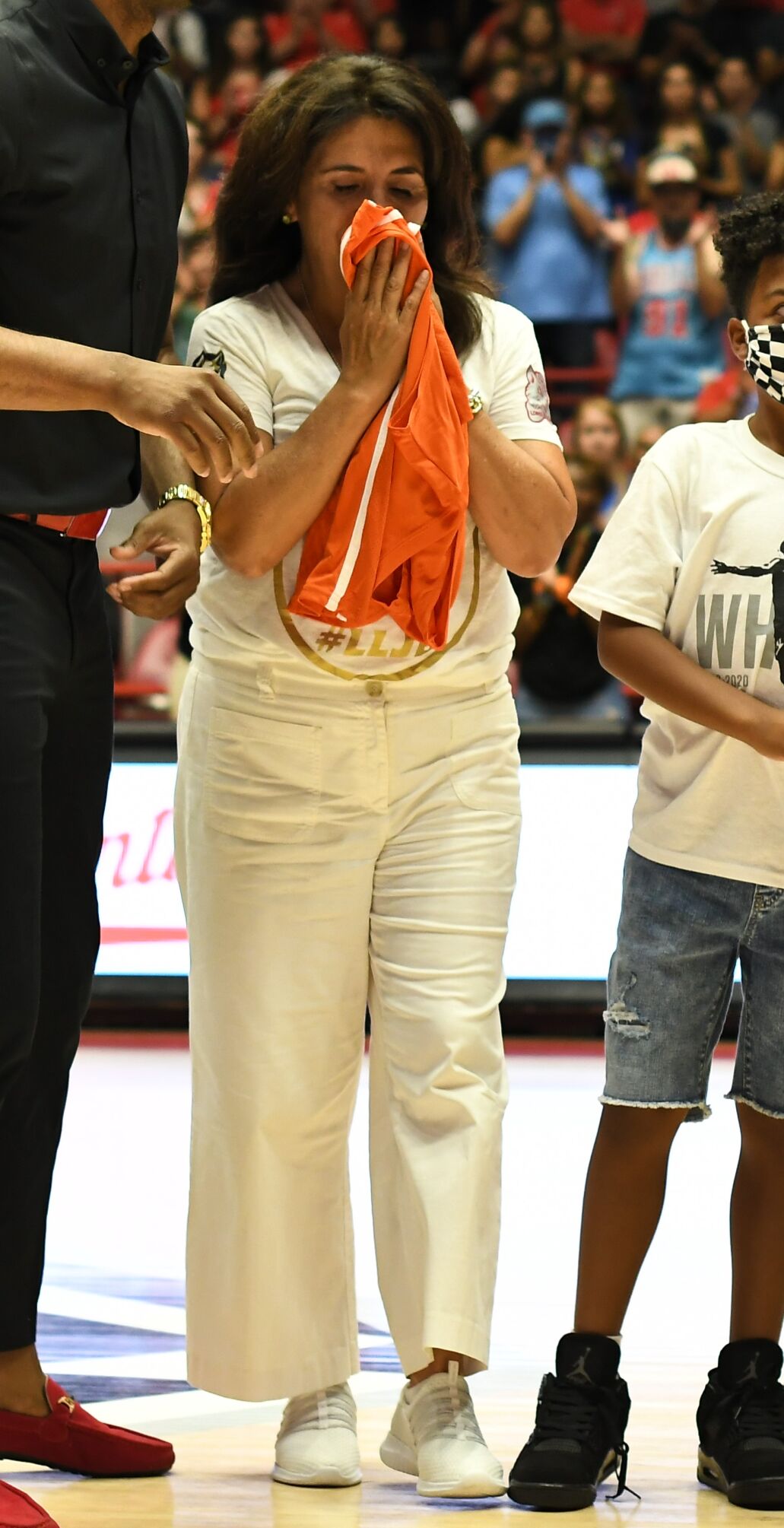 Jude Voss holds the Team JB White jersey signed by all the players in the New Mexico Enchantment Alumni Games on July 11 in The Pit. Voss was an assistant coach for the team, which was named for her grandson, Fedonta ‘JB’ White, who was shot and killed last August. White had committed to play for the Lobos. 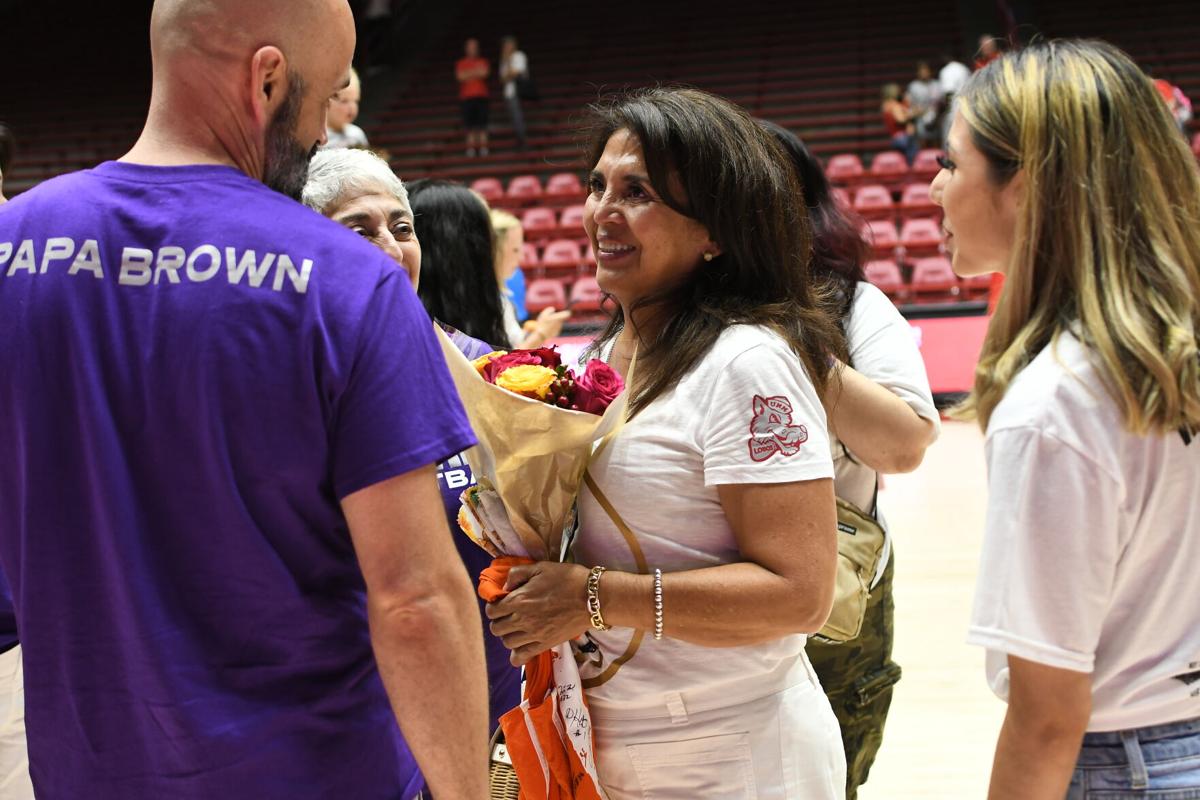 It's been a year since Santa Fe High basketball star Fedonta ‘JB’ White was fatally shot Aug. 1, 2020, while at a house party in Chupadero.

Fedonta ‘JB’ White celebrates in February 2020 after Santa Fe High beat Capital in a District 5-5A playoff game. It’s been a year since the death of the prep basketball star.

Jude Voss carries the Team JB White jersey given to her by New Mexico Enchantment Alumni Game organizer Brandon Mason, left. Voss was an assistant coach for the team, which was named for her grandson, who was shot and killed in August 2020.

Jude Voss holds the Team JB White jersey signed by all the players in the New Mexico Enchantment Alumni Games on July 11 in The Pit. Voss was an assistant coach for the team, which was named for her grandson, Fedonta ‘JB’ White, who was shot and killed last August. White had committed to play for the Lobos.

There are two places where Fedonta “JB” White still lives and the calendar forever remains July 31, 2020.

Inside the home of Jude Voss, White’s bedroom still is untouched a year after the Santa Fe High School basketball star — the state’s most highly recruited athlete and perhaps the city’s most promising athletic talent in 60 years — was shot and killed at a house party in Chupadero on Aug. 1, 2020.

The room is a veritable basketball shrine, filled with myriad shoes the 18-year-old acquired over the years, mementos from his playing career and letters from prospective men’s college basketball programs recruiting the 6-foot-8 forward.

Voss, White’s grandmother, keeps the door to the room closed, except to occasionally show visitors.

The stall he occupied is unchanged, filled with his clothing as well as more shoes and recruitment letters. Zack Cole, the Demons’ head coach and White’s uncle, said he intends to install plexiglass to enclose the stall to memorialize White for his family and keep his legacy alive for current and future players.

Cole said he hopes it remains long after he leaves the program.

“That’s how we knew JB,” Cole said. “It’s not just on the basketball court, but behind closed doors, and we want to hold on [to] that.”

But even the tightest grip cannot stop the clock or the calendar from moving to Aug. 1.

White’s death reverberates not just through Santa Fe, but through the state and beyond. It has also galvanized support for his family. Vigils were held in the immediate aftermath of his death, and a shrine of rosary candles on the outdoor basketball courts at Franklin E. Miles Park lingered for months. Former UNM men’s basketball coach Paul Weir set up a business school scholarship in White’s name.

A club basketball program created by former UNM assistant coach Brandon Mason was named for White, as well as one of the teams at last month’s New Mexico Enchantment Alumni Game in The Pit. Mason made Voss an assistant coach of that squad.

Voss even started her own nonprofit organization, the JB White Give Back and Be Kind Foundation, which focuses on helping underprivileged kids and giving them opportunities to be successful in life. She recently started to accept donations for the effort.

Kaila Boston, White’s aunt, said the outpouring of support for the family has been overwhelming and helped as his loved ones tried to move on from the tragedy.

Though time is a healing agent, Boston said she can’t help but feel anger that the one-year milepost of her nephew’s passing has arrived already.

“It’s been a super-hard year,” she said. “We’re all trying to deal with it in healthy ways, with work and doing things that would make JB happy, but it is hard every day to get up and just move forward. I feel kinda resentful that everything is moving so fast. It’s been a year, and you just want everything to stop for a minute.”

Boston is not alone in that sentiment. Family members acknowledged the first few months after White’s death were a haze, and there are moments when a memory of White can bring them to a halt in the middle of the day. Adrienne Cole, Zack Cole’s wife and another of White’s aunts, said her short-term memory was jangled for a while. She said she took anti-depressants for a while to cope with her grief.

Even now, she said a workout on her spin bike designed to clear her mind can lead to a roller coaster of emotions.

“I’ve been on that bike and cried my eyes out. I’ve been on there when I’m angry,” Adrienne Cole said. “I’ve started riding happy and all of a sudden I’m bawling. I mean, I don’t know what I’m going to get sometimes. But it’s saved me.”

Voss and Bianca Vega, White’s mother, declined interview requests for this story. Tamara Ortiz, Voss’ sister and Adrienne Cole’s mother, paused for a few moments to gather her composure when talking about the impact White’s death still has.

“My thing has been the heartache and the hurt,” Ortiz said. “I hurt for my sister and Bianca, and I hurt for Adrienne and Zack. I hurt for our community and our babies, for JB’s teammates and our friends.”

Even as they tried to make sense of what happened, adversity continued to hit White’s family. The Coles dealt with a bout of COVID-19 in the fall, and Ortiz discovered she had Stage 2 kidney cancer in May. Surgery in June removed the tumor but left her with one kidney. She has a follow-up appointment in October to see if the cancer has spread.

Ortiz said she didn’t tell any of her family until the day before her surgery to ease their worry. That didn’t stop them from rallying around her and offering her as much help as she needed.

“Judy, she offered me her kidney,” Ortiz said with a chuckle. “She said, ‘I’ll give you my kidney! I’ll give to you right now.’ But I told her that wasn’t necessary, I’m going to be OK.”

The episode underscored how much the family has rallied around one another since White’s death.

There have been many family gatherings, especially at the homes of the Coles and Voss. Boston said they have been vital in everybody’s mental health, especially their children. She said her 9-year-old son doesn’t talk about White’s death, but she believes him being around his cousins helps him process his feelings.

“They’re all running around and having a great time, and they play basketball,” Boston said. “I gotta say, hearing the basketball [bounce] is especially hard, but being with everyone is just an overwhelming sense of love and just a safe space. Everybody doesn’t get on each other’s nerves like before [White’s death]. I feel like we are so much more understanding of each other.”

But even as White’s family adjusts to life after death, there is the looming specter of a trial.

Jury selection for the trial of Estevan Montoya, who is accused of shooting and killing White, is set for early October. Montoya is charged with first-degree murder, tampering with evidence, unlawful carrying of a handgun by a person under 19 and negligent use of a deadly weapon.

The Coles said they are not sure if they will watch the trial, whether in person or virtually, because both of them are teachers, but Adrienne Cole said she expects Voss to be present.

“I feel like I have to be there for my aunt and for my cousins,” Adrienne Cole said. “At the same time, where does my mental health fit in? I mean, I have my own kids to take care of, as well as my work. And I don’t have a desk job, where I can be at my desk and cry all day. At the end of the day, I hope there’s justice for JB.”

That is for another time. For now, the family of JB White focuses on being there for one another and finding a place to keep him alive — whether it’s in a room, a locker room stall or their hearts.

Seems like our DA is over charging, as they do too often. Deputy DA Jennifer Padgett is notorious for that. Charging 1st degree murder (premeditated) seems unwise, as the shooting seemed quite spontaneous. Even if they get a conviction on that charge, it would likely be overturned on appeal, as a number of other Padgett cases have been. Our DA office is a mess, and Padgett is a BIG problem. She has served under 3 Santa Fe DA's, and been the DA, and just keeps being a problem. Sweet smile, "hang em high" attitude, and incompetent. A potent mix.