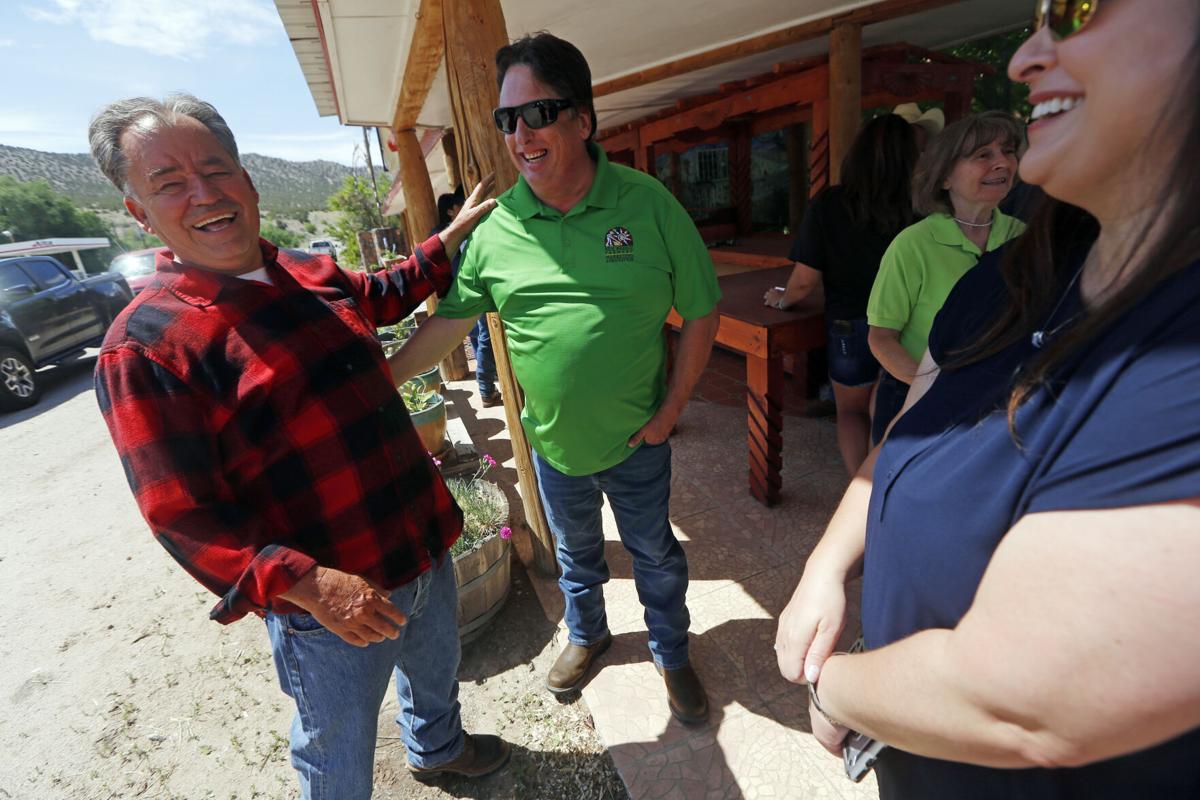 Farmer Eddie Velarde, left, and Michael Venticinque, value chain coordinator at the New Mexico Farmers’ Marketing Association, chat after a meeting Wednesday with the U.S. Department of Agriculture Farm Service Agency. Velarde is among Northern New Mexico farmers applying for debt relief from the USDA as compensation for past discrimination at the agency. 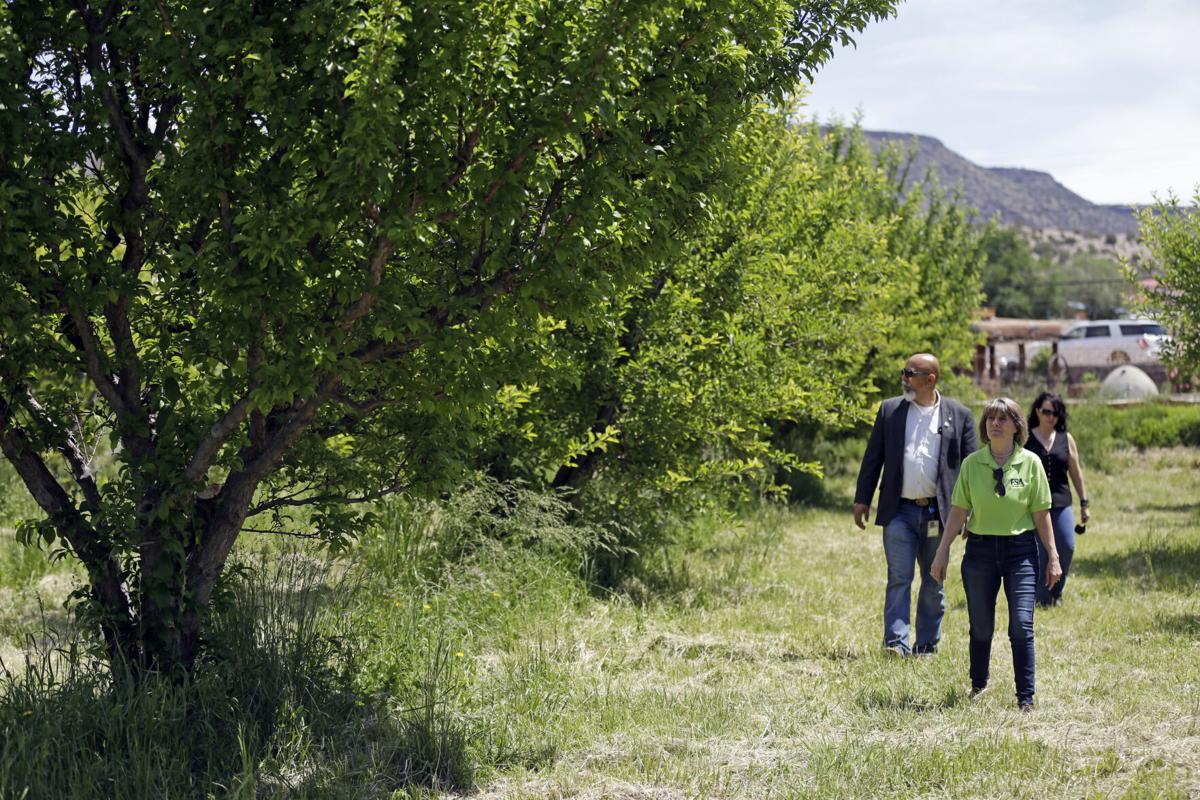 Farmer Eddie Velarde, left, and Michael Venticinque, value chain coordinator at the New Mexico Farmers’ Marketing Association, chat after a meeting Wednesday with the U.S. Department of Agriculture Farm Service Agency. Velarde is among Northern New Mexico farmers applying for debt relief from the USDA as compensation for past discrimination at the agency.

Ignoring ethnic minorities who work the land is part of the racism that was long embedded in the U.S. Department of Agriculture until recent years, said Martinez, a grower and former Rio Arriba County commissioner.

“In my dad’s situation, I think that the agency did a very poor job at communicating to rural Hispanic and Native American communities about these programs,” Martinez said.

Some of the farm assistance was created under President Franklin D. Roosevelt’s New Deal, so it has been around nearly 100 years, but nonwhite farmers historically were excluded, Martinez said.

Now, in an effort to confront what advocates say is a decadeslong injustice, the department is offering debt relief to “socially disadvantaged” farmers — or those who belong to ethnic groups that have suffered discrimination.

The relief is being offered through President Joe Biden’s American Rescue Plan to eligible producers who received loans from the agency before Jan. 1, Liz Archuleta, the agency’s intergovernmental affairs director, told a group gathered Wednesday at Velarde Orchards, 40 miles north of Santa Fe.

The agency will pay up to 120 percent of the farmers’ loan balances as compensation for its longtime and well-documented racial inequity, Archuleta said.

The systemic racism has prevented socially disadvantaged farmers from achieving as much as their white counterparts, she added.

About $4 billon has been allocated to this debt-relief program. New Mexico has 400 to 500 borrowers who qualify, Archuleta said.

Nationally, more than 14,400 such farmers have almost $2.7 billion in active loans, according to the agency’s data.

In the past 30 years, Black, Native American and Hispanic civil rights groups have sued the agency for racial discrimination. But settlements “did not address the systemic and cumulative impact of discrimination over a number of decades,” Archuleta said.

More recently, the racial disparity was spotlighted during the coronavirus pandemic when white farmers received about 99 percent of the federal financial aid that was dispensed to ease economic effects, Archuleta said.

The lawsuits are based partly on a rule change that no longer includes white women in the socially disadvantaged category.

One lawsuit, filed by Texas Agriculture Commissioner Sid Miller as a private action, challenges the constitutionality of race-based debt relief. Five Midwest farmers have filed the second one, arguing it’s unfair they should be denied loan forgiveness because they are white.

Archuleta briefly referred to the lawsuits Wednesday; she said the agency is working with the U.S. Justice Department to respond to them.

In the meantime, the agency will make loan payments to farmers, she said.

Eddie Velarde, the orchard’s owner, said he is applying for the debt relief and will encourage anyone he knows who’s eligible to do so.

“This is a one chance in a lifetime — it’s not going to come again,” Velarde told the group.

After the meeting, Velarde said he needs the assistance to get through hardships caused by the pandemic and drought.

He estimates he lost about 80 percent of his normal sales during the pandemic as schools, restaurants and other fruit buyers shut down.

His sales for apples, cherries, pears, nectarines, plums and other fruit fell to 400,000 pounds from 1.6 million. He called it a devastating blow and said he was forced to discard a huge amount because there was no place to sell it.

He went from 18 employees to six. But he’s not giving up hope.

Teddy Salazar, another area farmer, has about 8½ acres on which he grows a variety of fruit and vegetables, including peaches, apples, cherries, broccoli and cauliflower.

This federal aid will relieve a good portion of his debt, he said, allowing him to recover from the pandemic and even expand his operation.

“We were kind of shut down,” Salazar said. “We had a hard time trying to sell our produce. The schools were closed.”

Nonwhite farmers have been treated more fairly in the past 10 to 15 years, Martinez said. But you only have to go back 20 years to find prejudice against people of color within the federal farm system — and some of it was overt, he said.

He said he witnessed federal loan officers reject Hispanic farmers before they had a chance to fill out documents to formally apply.

White producers were introduced to the best technology, such as irrigation and harvesting equipment, while Indigenous and Hispanic growers were never given access to it, Martinez said, adding you can see evidence of it throughout Northern New Mexico.

“All our rancher families have been doing everything the hard way for the longest time,” Martinez said.

Where were all you whiners during the many years when millions of minority farmers lost their farms due to Ag Dept discrimination?

The bigger question is where were you?

Where was your commentary, Joseph Tafoya, on the article "Biden marks Tulsa race massacre" of 1921? Maybe you are not interested in the history of racist oppression, except when you can whine "white people are SOL!"

Ted, those folks loved it when whites benefited from discrimination against non-whites. They are just furious it is ending.

Reverse racism for any reason is still racism. Can you imagine if there was a "whites only" program of any kind?

You could read either this article or history generally to find out the USDA operated a whites only program all those years.

What kind of nonsense are you spewing this time, Lee? You do not understand that the government, banks and other leading institutions of this culture systematically discriminated against People of Color, Women, and other 'minorities?' You don't understand that when the egregious wrongs go on for centuries, eventually folks want to right those wrongs?

Have you no sense of fair-play, Mr. DiFiorie. This is not Racism. This is Justice building a better way, a social democracy.

Therefore if you are white your SOL, talk about discrimination? With Democrats practicing identity politics, they are not considered racist?

True, and beyond that, think about an executive branch department unilaterally deciding on spending $4 billion of your tax money to settle claims that have had no legal due process in our judiciary, and is so broadly spread as to not even come close to reaching any truly aggrieved and damaged parties with any evidence. That should scare most Americans about how our precious tax money gets spent.

Racial access to the minimum of services open to the public is about to start. It will start and in some cases has started with academia. According to some sources ( not the national lame stream media), Harvard Medical School instructors say that race should be used to determine how to admit people with heart disease. Middlebury College in Vermont held a vax event at for Covid. But only people of color and indigenous people were allowed to get the vax. As long as these liberal Colleges are not challenged it will only become mainstream.

Without citations Joseph Tafoya, your 'news' is nada≥

Put up credible cites of your sources, or put up an apology.

Where were you when the former occupant of the Oval stole billions from the military to put up his vanity wall? Oh...I remember...you were silent as the grave.

What does your post have to do with the topic of this article? And, to answer your question, why would I be against a wall that slowed the flow of illegal immigrants and drugs into the country?

Paying reparations for past racism is not 'racist'. It is paying a debt. A debt you and your ilk loved getting the benefit of and are now complaining about having to pay back.

Mr Cook reparations cannot be paid until Congress authorizes that. HR 40, a bill just to study it, is still not out of the House and is DOA in the Senate. I do not think a cabinet department deciding to pay them is legal or constitutional.

Mr. Cook, hope you saw the latest, this is unconstitutional and will be stopped......https://www.msn.com/en-us/news/us/judge-suspends-debt-relief-program-for-farmers-of-color-after-conservative-law-firm-white-farmers-sue-biden/ar-AAKVu7P?li=BBnb7Kz

Yes Mr. Joseph Tafoya, white people have been SOL forever in this country.

Not really apparent if we look at any measure of how the v various ethnic groups are doing in this country over the entire history. Your charge is just race baiting.

The only reality in your comment, besides the race baiting, is how really stupid Joe, your comment is, really slow.

I think this should and will end up at SCOTUS. Seems to violate the 14th Amendment as not all farmers with debt are being treated equally. What's next? Car loans, home mortgages, credit card rates, etc.?

Where was your voice all those years the USDA discriminated against people of color? Oh....I know...you were thinking how wonderful it was.

Mr. Cook, you mean when FDR, Truman, Kennedy, Johnson, Carter, Clinton, and Obama were in charge of all this? Why is it just now discovered and $4 billion of our tax money paid based on a person's skin color alone, no evidence of discrimination, no proof, nothing but hearsay? This doesn't worry you about how your government is handling our tax money?

The U.S. has a long and well-documented history of systemic racism throughout its institutions. Loan forgiveness is a start. Will the Agriculture Department also examine and alter the rest of its policies that favor white farmers over others?

No. The first policy stole from non-white farmers. This policy repays them. We call that 'justice'. Your wish to keep your ill-gotten gains is what is wrong.

Emily Koyama- There is a whole lot of difference between righting of documented accounts of neglect and discrimination, and the lining of pockets of Big Ag.

You would be right if the issue was one of favoring one skin color over another. That clearly is not the issue, and your twisted comment is a distortion of the matter.

Though perhaps you do not have the intellectual acumen to discern the difference between racist policies and the righting of wrongs.

Thanks for nothing, Emily.