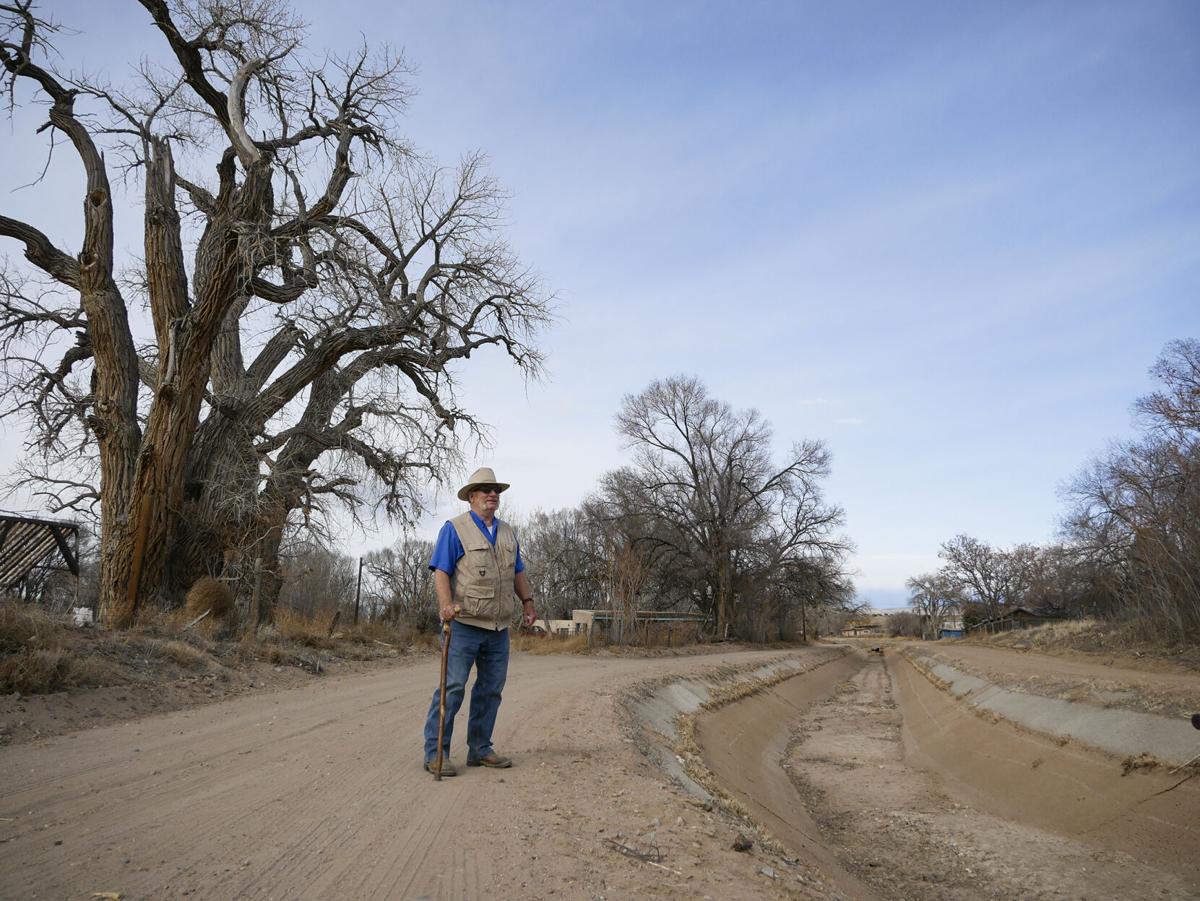 Paul Skrak, owner of Hidalgo Farms near Peña Blanca, stands along an empty irrigation canal Tuesday. A diminished water supply has prompted the Middle Rio Grande Conservancy District to hold off on providing irrigation water to farmers until April. 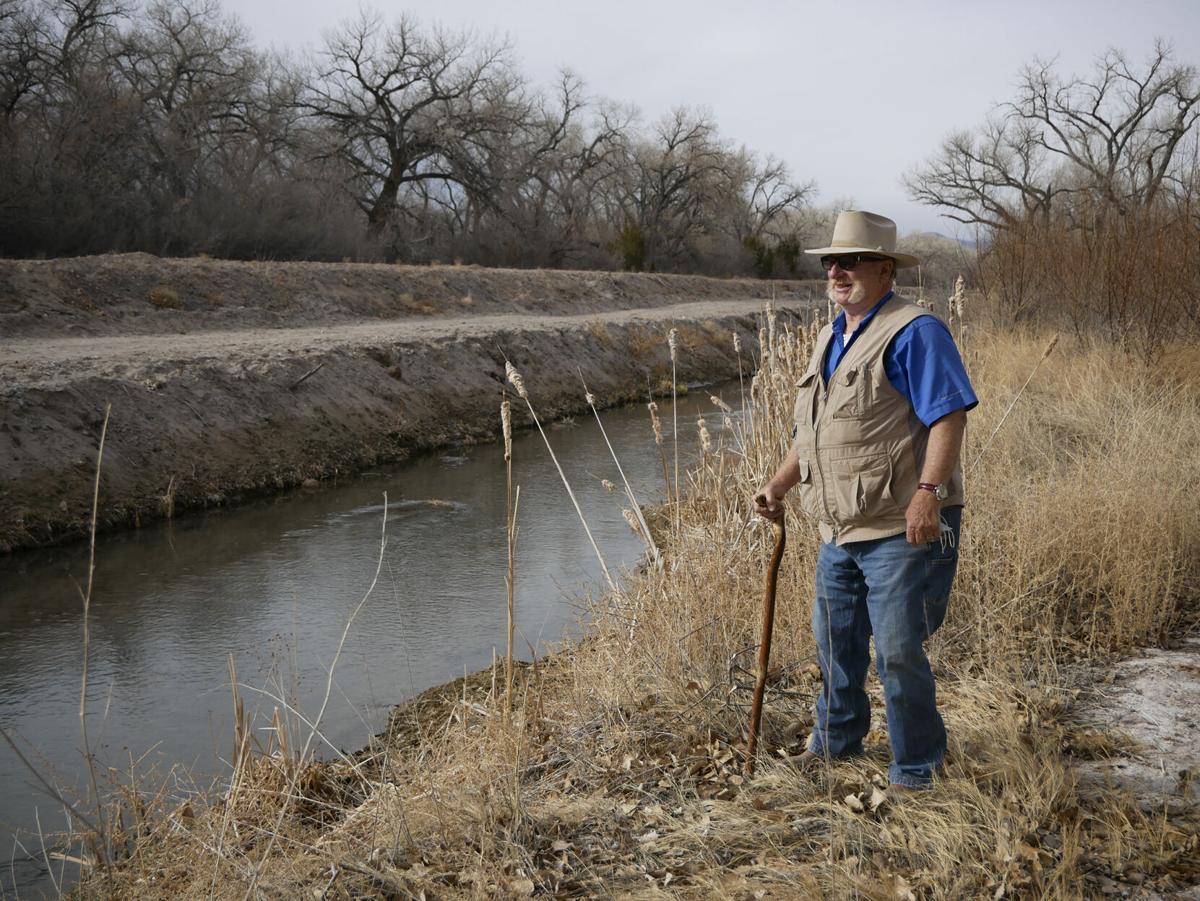 Paul Skrak, owner of Hidalgo Farms near Peña Blanca, looks at an irrigation canal Tuesday along his property that lies on the northern end of the Middle Rio Grande Conservancy District. 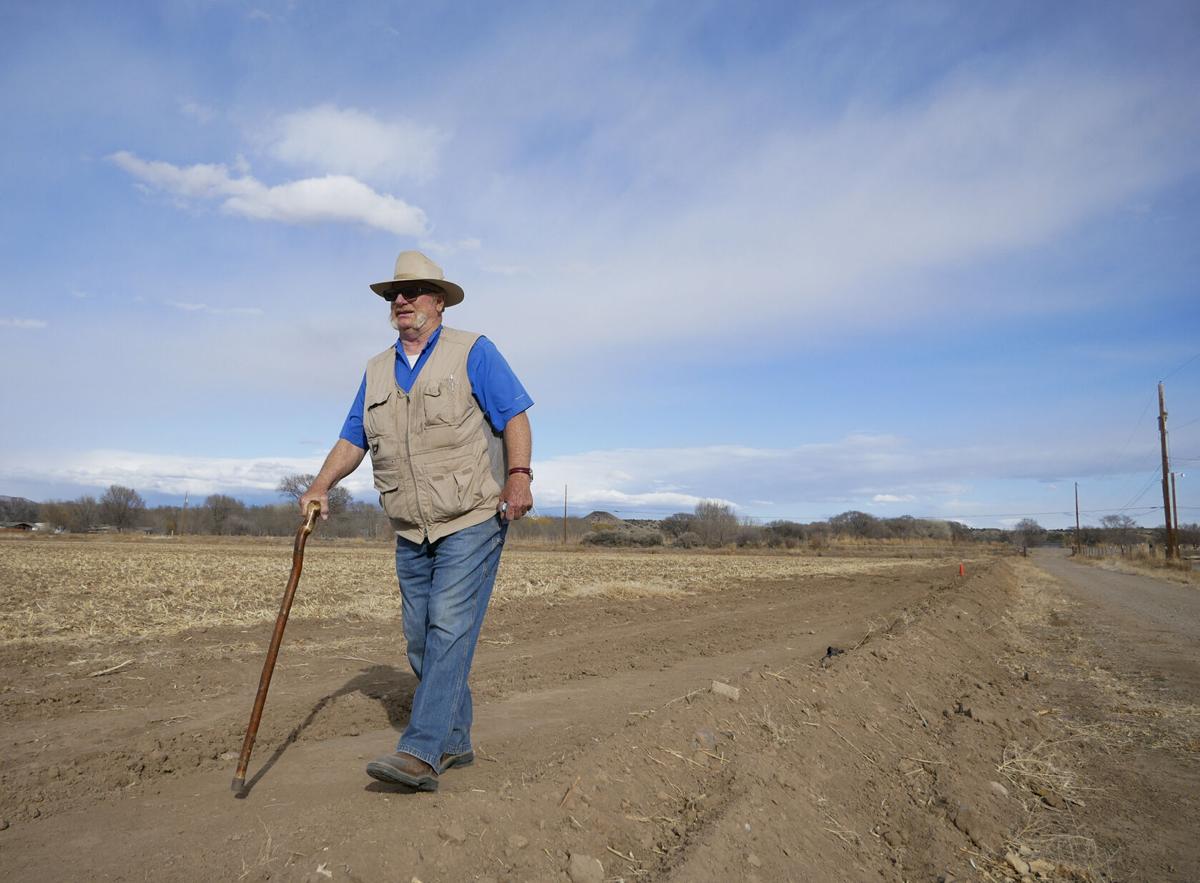 Paul Skrak, owner of Hidalgo Farms near Peña Blanca, walks Tuesday along an irrigation berm recently built to help prevent the waste of water in the field. 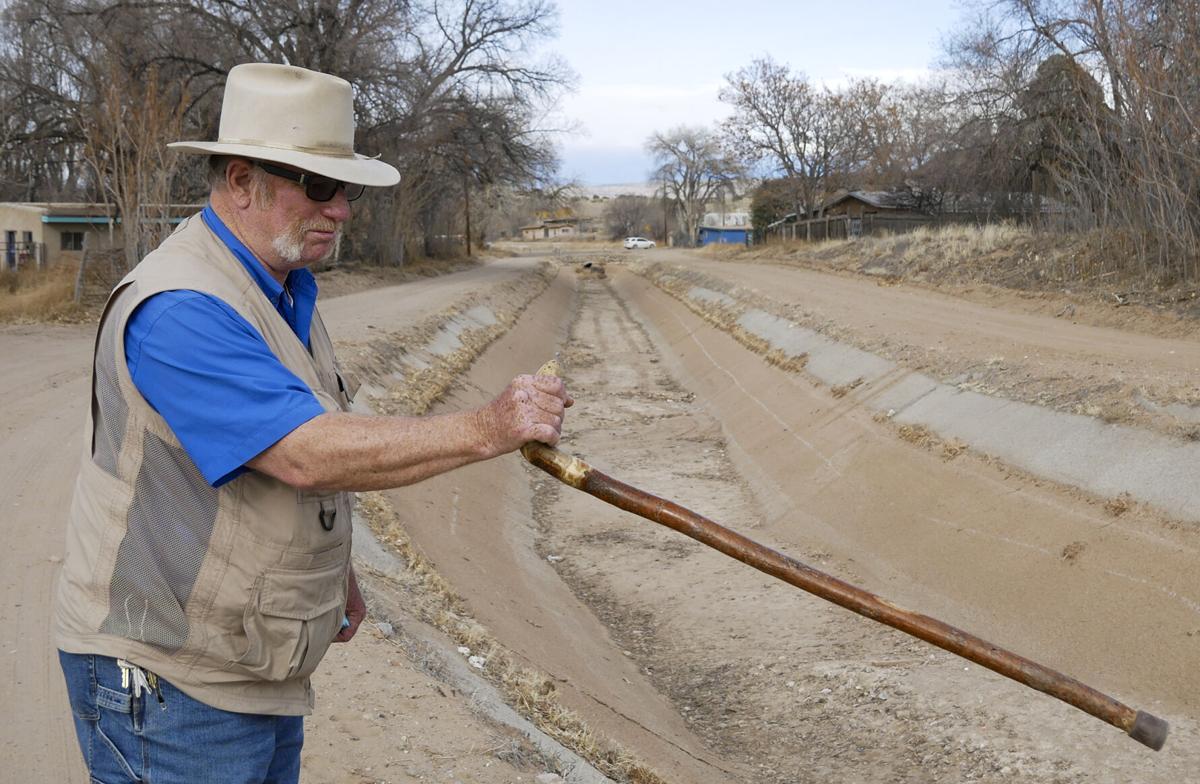 Paul Skrak, owner of Hidalgo Farms near Peña Blanca, points with his cane to the water line of an empty irrigation canal Tuesday. A diminished water supply has prompted the Middle Rio Grande Conservancy District to hold off on providing irrigation water to farmers until April.

Paul Skrak, owner of Hidalgo Farms near Peña Blanca, stands along an empty irrigation canal Tuesday. A diminished water supply has prompted the Middle Rio Grande Conservancy District to hold off on providing irrigation water to farmers until April.

Paul Skrak, owner of Hidalgo Farms near Peña Blanca, looks at an irrigation canal Tuesday along his property that lies on the northern end of the Middle Rio Grande Conservancy District.

Paul Skrak, owner of Hidalgo Farms near Peña Blanca, walks Tuesday along an irrigation berm recently built to help prevent the waste of water in the field.

Paul Skrak, owner of Hidalgo Farms near Peña Blanca, points with his cane to the water line of an empty irrigation canal Tuesday. A diminished water supply has prompted the Middle Rio Grande Conservancy District to hold off on providing irrigation water to farmers until April.

Farmers will have to wait a month longer this year to irrigate crops, thanks to the persistent drought depleting available water.

Not only is the Rio Grande running low, but regional reservoirs have dipped to their most meager levels in years, according to federal data.

The severely diminished supply has prompted the Middle Rio Grande Conservancy District to hold off on providing irrigation water to farmers until April, creating what one official described as an exceptionally short growing season.

One farmer said the delay in getting water will force him to plant crops in hotter weather.

“We have to plant way later and it will already be getting hot, and the heat and the sun will bake those plants germinating,” said Paul Skrak, owner of 55-acre Hidalgo Farms near Peña Blanca. “By July, it’s 100 degrees here in the Peña Blanca Valley, so it’ll kill some plants that can’t tolerate it. And others, it’ll stunt their growth.”

The district must put off supplying water to farmers so it can shore up reservoirs to repay some of the hefty debt it owes Texas under the Rio Grande Compact, Gensler said, referring to a multistate water-sharing agreement.

New Mexico owes Texas almost 100,000 acre-feet of water. An acre-foot is about 326,000 gallons, roughly enough to supply a four-person household for a year.

This growing season, officials will be unable to release water from depleted reservoirs to boost river flows, Gensler said. And whatever water builds up in these storage areas must be retained to later funnel to Elephant Butte Reservoir, the main hub supplying water to southwest Texas.

Part of the debt owed to Texas is for 36,000 acre-feet of water that the state released during last year’s drought to help New Mexico farmers irrigate.

“I don’t think that we can expect a whole lot this year,” Gensler said

The five main reservoirs on the Rio Grande and Chama River — Heron, El Vado, Abiquiú, Elephant Butte and Caballo — are at a combined 7 percent of capacity in 2021, according to the Natural Resources Conservation Service, a federal agency that assists growers.

“A lot of them are pretty pitiful,” Hergert said of the reservoirs.

The winter of 2019 provided a decent snowpack and runoff that was slightly above normal, he said, but that turned out to be one wet spell in a long, dry stretch.

“One good season isn’t enough to refill a reservoir,” Hergert said. “We have to have several good ones in a row.”

The region has had several years of below-normal snowpack, with much of the runoff being absorbed into the soil rather than boosting river levels, he said.

La Niña is compounding the drought, Hergert said, referring to an ocean cooling event that reduces evaporation and results in even drier conditions in the Southwest.

The good news, he said, is that La Niña is expected to abate during the summer, which could lead to a better monsoon than last year’s almost nonexistent one.

A Santa Fe environmental group said postponing irrigation for a month will help prevent the Rio Grande from dropping so low as to imperil the silvery minnow, which has been listed as endangered since 1994.

“Where things are right now, this is a definite benefit for the ecological health of the river and the health of the silvery minnow,” said Tricia Snyder, Rio Grande campaigner for WildEarth Guardians.

Spring peak river flows are vital to the minnow, signaling it’s time for them to spawn, Snyder said.

It’s important to consider plants and wildlife that depend on the river as well as human communities; otherwise, the ecosystem could be permanently damaged, she said.

“This is going to be a tough summer,” Snyder said. “And unfortunately with climate change projections — the way that they’re looking for New Mexico — we’re going to be in for tough summers for the foreseeable future.”

Skrak said he is fortunate he doesn’t subsist solely on farming and has other ways to make money, such as construction.

“But the farmers that live off what they grow, it’ll be terrible for them,” he said. “Just terrible.”

Matt Dahlseid contributed to this report.

welcome to the new normal. farmers should keep electing republicans who deny there is even a problem happening; see how economically advantageous they remain over the next decade or so.

Keep in mind that vast amounts of Rio Grande water are wasted growing cattle feed in southern Colorado before the river enters New Mexico. Cattle raising uses huge amounts of water for almost no economic gain for our region. Somehow we need to make growing hay and alfalfa too expensive for farmers to continue with these crops. Let's grow people food and phase out public land ranching in the Southwest. That's where the water is going.

If they own they water right they are entitled to use it, you saying what you said is like me saying that I should look at your house and determine if it is to big for you and make it too expensive for you to live in it. Water is owned like real estate and if you want more then you buy it.

Richard Reinders- How will we buy more water, when the MegaDrought/Climate Change turn "Water Rights" into Empty Promises?

If no one has told you cows are people food so is milk, yogurt cottage cheese, butter and cheese. A lot of the hay in Co. goes to dairy farms in NM. Also there is a compact between Colorado New Mexico , Texas and Mexico each one of these parties to the compact is entitled to their share of water based on ownership and that is not our business just the New Mexico allotment which is supported by ownership by Farms Ranches and Cities and 100% allocated.

These products are water intensive, as well as carbon intensive, compared to the production of plant based foods.

In a world of scarcity, the wise choice is to move away from meat and dairy foods. In the c current MegaDrought, that choice will be government mandated, as folks will come to gladly give up their intensive animal protein consumption when drinking water is rationed.

For the life of me, a Green Mountain Boy, I never could figure dairy farms in the desert. As practical as golf courses, no doubt. Though a lot more stinky!

An acre foot of water would supply four 4-person households for a year with water use of approximately 50 gallons per person per day on average.