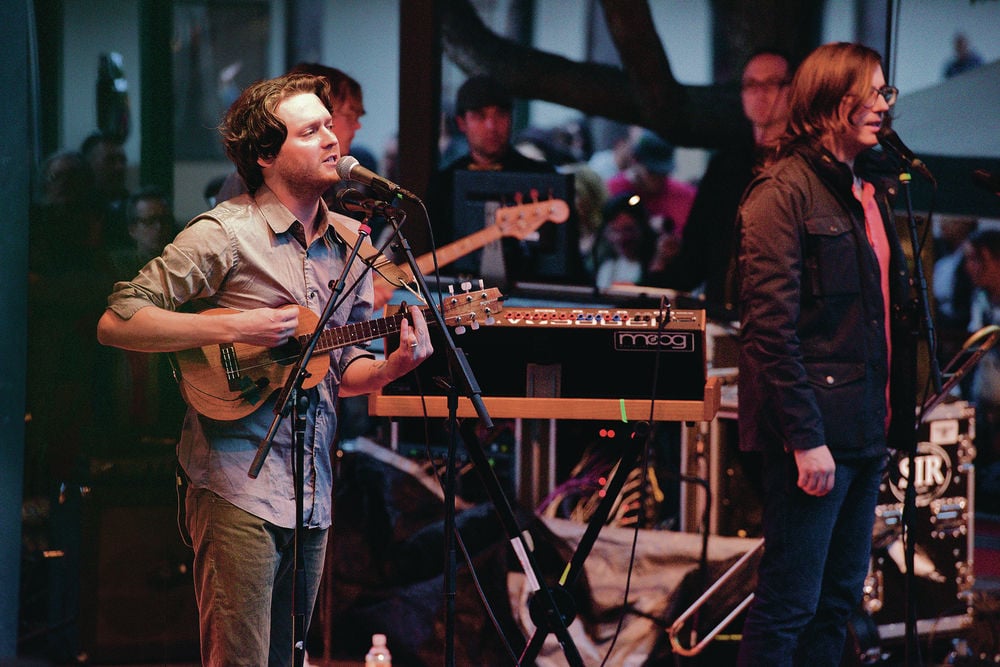 Zach Condon, left, and his band Beirut perform Sunday in a free concert on the Plaza. Condon, the band’s founder and lead musician is originally from Santa Fe. Luke E. Montavon/For The New Mexican 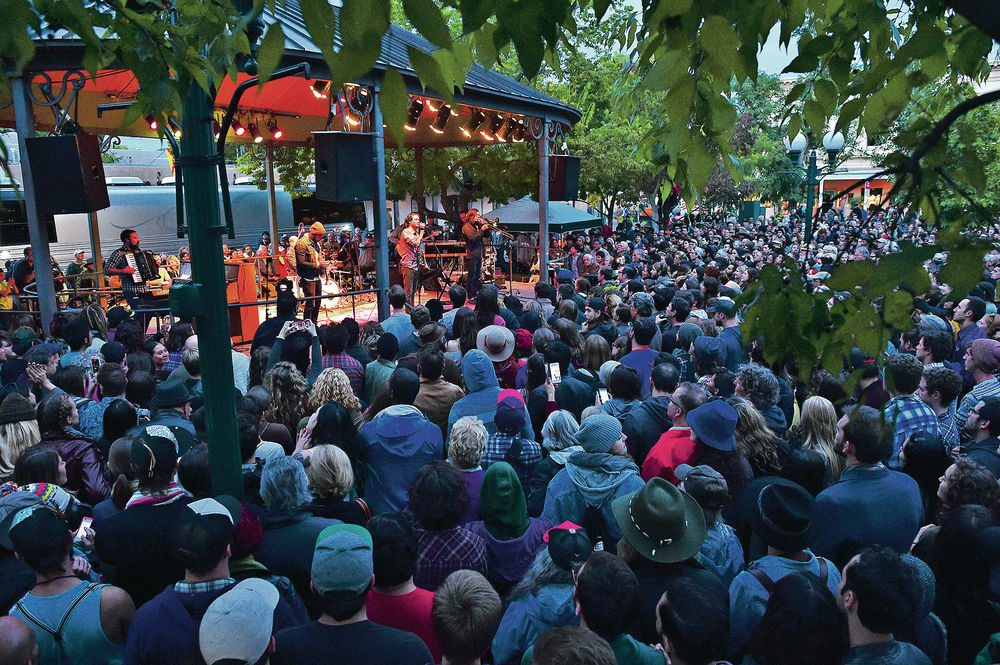 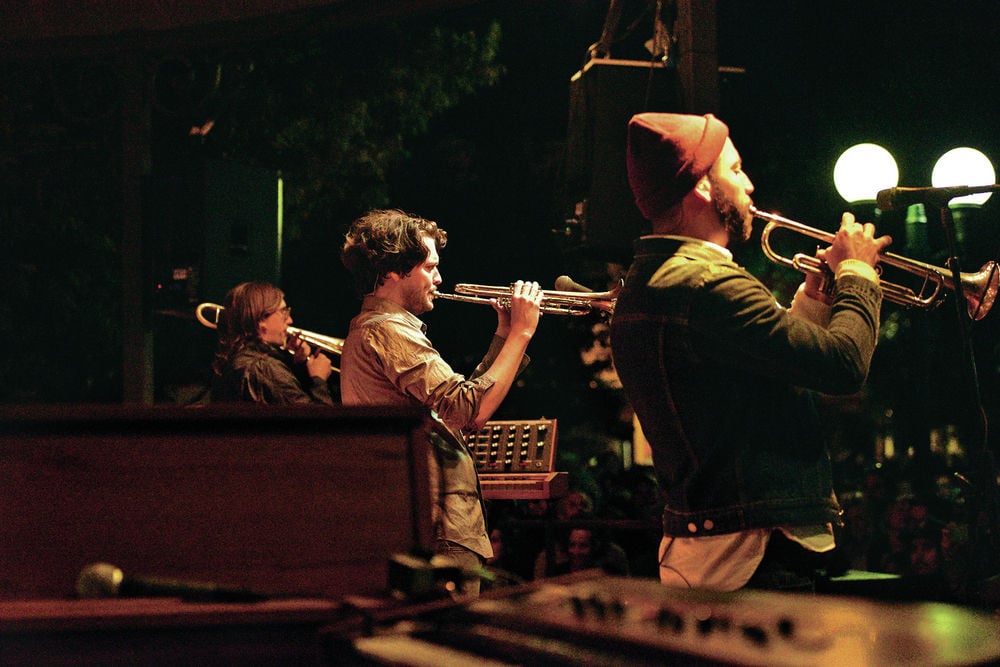 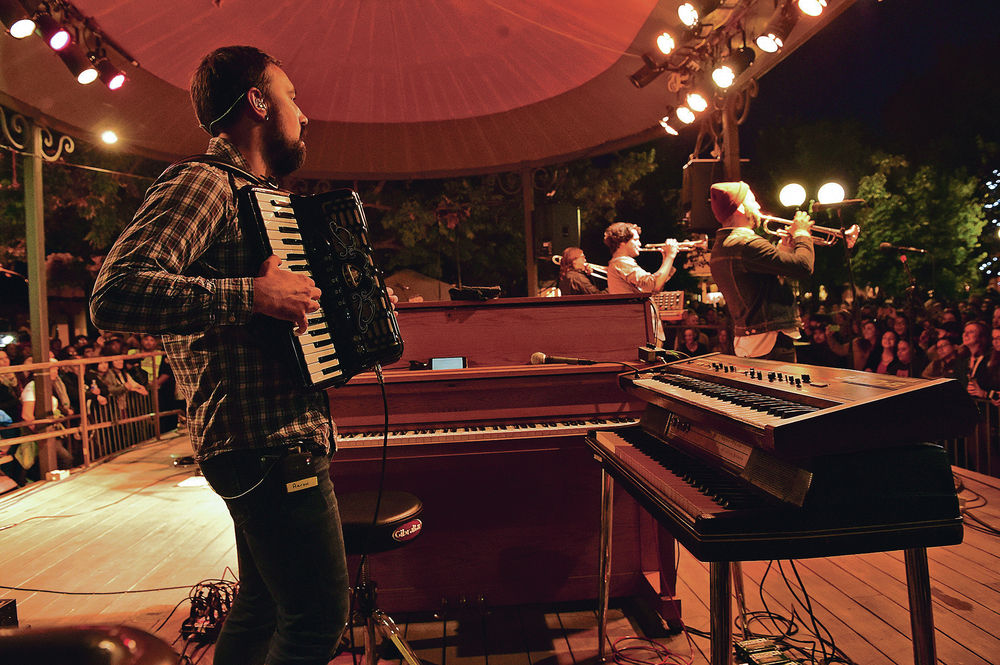 Beirut performs for a crowd of approximately 3,000 people on the Plaza on Sunday night. Luke E. Montavon/For The New Mexican

Zach Condon, left, and his band Beirut perform Sunday in a free concert on the Plaza. Condon, the band’s founder and lead musician is originally from Santa Fe. Luke E. Montavon/For The New Mexican

Beirut performs for a crowd of approximately 3,000 people on the Plaza on Sunday night. Luke E. Montavon/For The New Mexican

By most eyewitness accounts, Damaris Neyra of Mexico was the first to lay claim to a space in front of the Santa Fe Bandstand in anticipation of the Beirut concert Sunday. She got there before 2 p.m. for the 6:30 p.m. show.

“Beirut is one of my favorite bands,” she said, proudly displaying a Beirut T-shirt she brought for the occasion. “Their music always makes me happy, euphoric. I like the feeling that they give me.”

She wasn’t alone. By 4 p.m., about 200 people had gathered on the Plaza in advance of the free concert, and dozens more lined the nearby streets and second-story outdoor balconies of various eating establishments. By 6:30 p.m., it seemed 10 times that number were on hand to hear the band.

Some 3,700 people had responded on Facebook that they intended to attend the concert, according to promoter Jamie Lenfestey. One police officer on the scene estimated the crowd was at least 3,000 strong.

Much of the draw was because Beirut’s founder and lead musician is Santa Fean Zach Condon, a local boy who made good after dropping out of Santa Fe High School to pursue his dream of becoming a professional musician.

The band’s first album, 2005’s Gulag Orkestar, was recorded in Albuquerque. The band just released its fourth album — its first in several years — titled No, No, No.

Condon has cited foreign influences behind his music, from French chansons to Balkan brass, and the band’s catchy global beat has attracted fans from around the world. It’s music that’s hard to not dance to, although there really wasn’t much room on the Plaza to do more than sway from side to side.

Sunday’s crowd ranged in age from babies in strollers to senior citizens, with a number of dogs thrown into the mix.

In a 2011 interview with The New Mexican, Condon said he spent his teen years hanging out at skate parks and making bedroom recordings of songs he wrote because he suffered from insomnia: “I had so much time to kill, and especially so much alone time. That kind of isolation coupled with insomnia fit quite nicely with writing a tune every night.”

The band is now headquartered in New York, and Santa Fe appearances are rare. The most recent ones were at Warehouse 21 and the Santa Fe Community Convention Center.

In Sunday’s crowd were many longtime fans of Beirut, including Sarah Rivali of Albuquerque. “Their music is the soundtrack to my early adulthood,” she said.

Hayden Rector of Santa Fe played in school bands with Condon at both Capshaw Middle School and Santa Fe High. He recalled Condon as a teen who “had an incredible amount of talent … from early on.”

“He’s one of Santa Fe’s native sons returning to do us a service,” Rector said.

Others in the crowd were unfamiliar with Beirut’s sound but still wanted to enjoy an outdoor event on the Plaza before fall weather puts them on ice.

Dennis Cicak, 66, of Santa Fe, who sat in a lawn chair on the Plaza, said he had never heard Beirut before Sunday night.

“I’m here because this band is reputed to have had a meteoric rise,” he said. “I never heard the leader play, but if he wants to come give a free concert, who am I to not attend? I’m an old rock ’n’ roll fan.”

Other fans came from Mexico, El Paso, Colorado and Seattle, based on a random survey of the crowd.

Beirut played some of its best-known songs, including “Postcards From Italy,” “No, No, No,” and one that got the crowd screaming in delight — “Santa Fe.”

“This one’s for you, of course,” Condon told the assembly before the band played the tune.

Captain Jerome Sanchez of the Santa Fe Police Department said there were no incidents to report from the concert, which lasted about 90 minutes.

I attended the concert last night and was not only impressed with the group Beirut but the crowd was incredibly happy and considerate of each other with no negative behavior at at all in the area around the "jumbotron". How wonderful to be able to attend a free concert by a world-class group on a gorgeous Santa Fe night. Thank you Beirut and all the residents and visitors of Santa Fe for a magical evening!