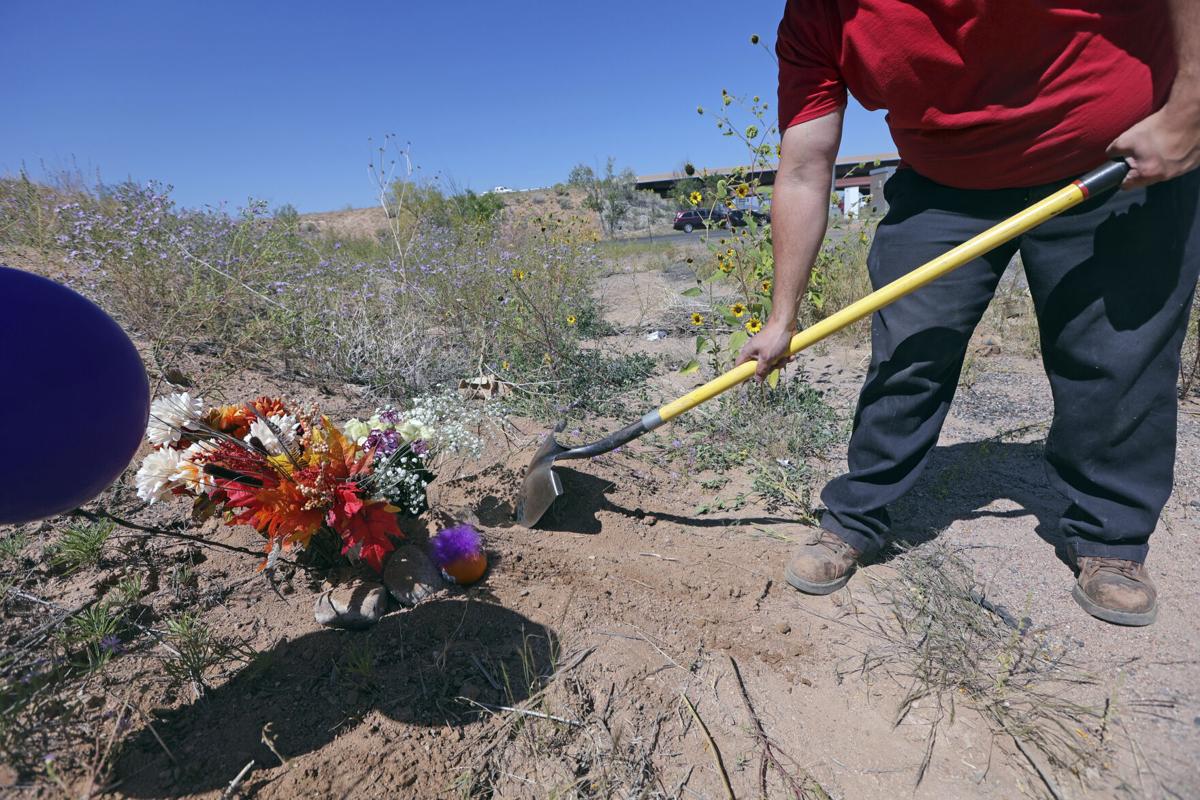 Daniel Martinez clears weeds Friday from a descanso for his cousin Bryana Trejo-Griego and her husband, John Derek Griego, at the intersection of N.M. 599 and West Frontage Road. The couple died in a crash earlier this month, the day before their first wedding anniversary. 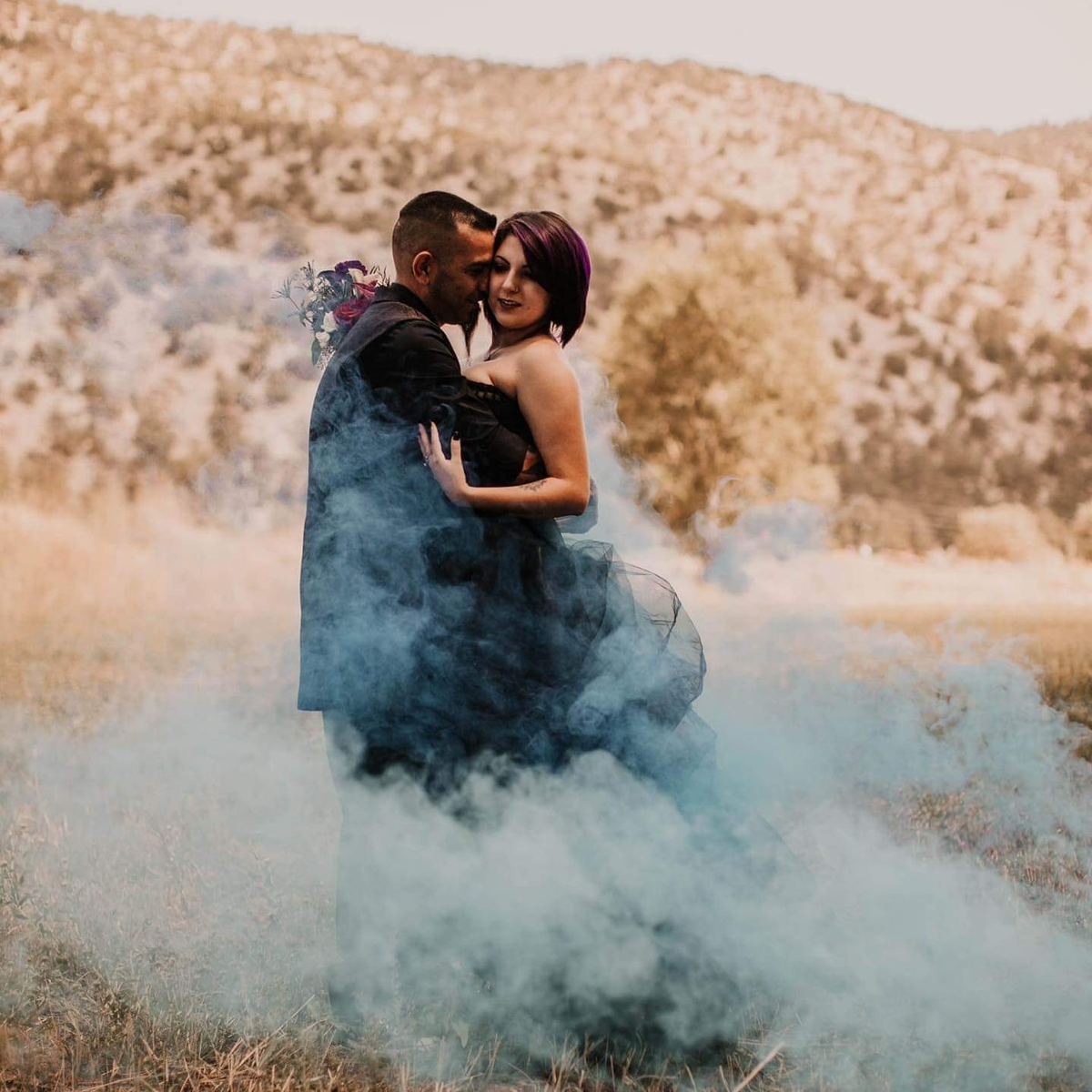 JD Griego and Bryana Trejo Griego at their wedding Sept. 6, 2020. 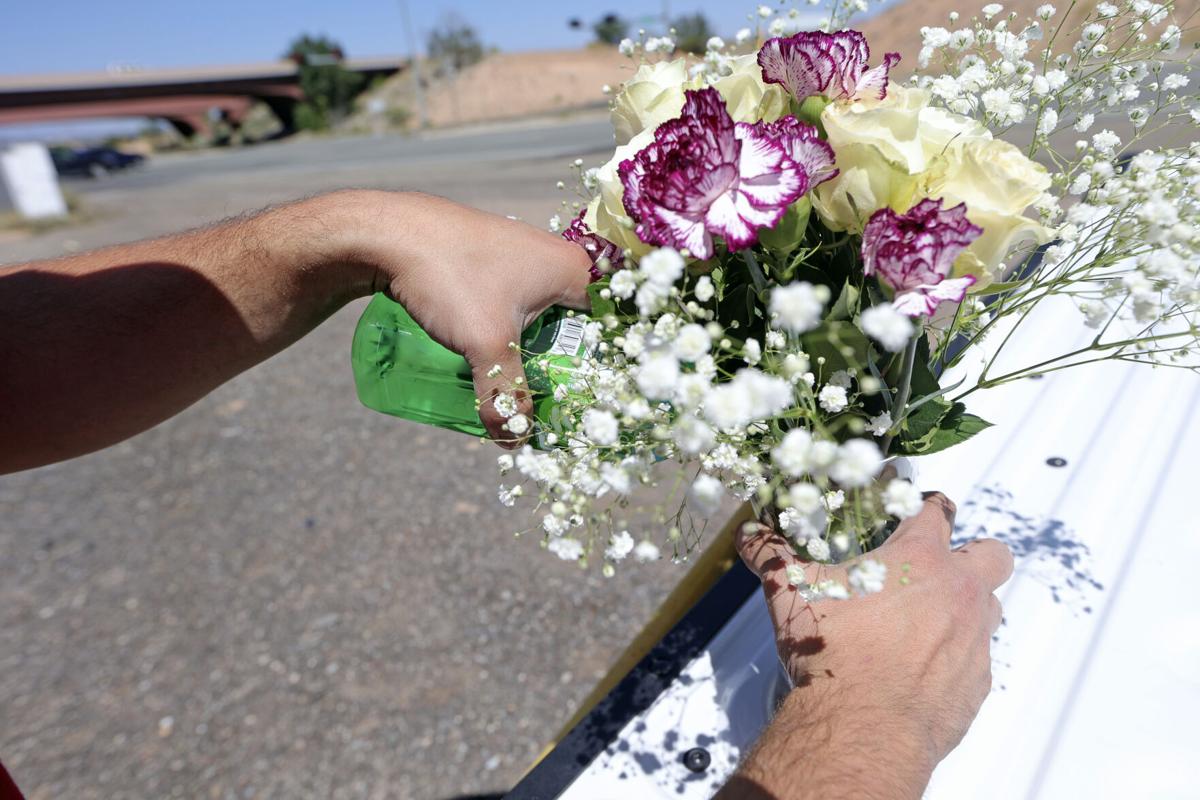 Daniel Martinez puts water in a vase for a descanso for John Derek Griego and Martinez’s cousin, Bryana Trejo-Griego. 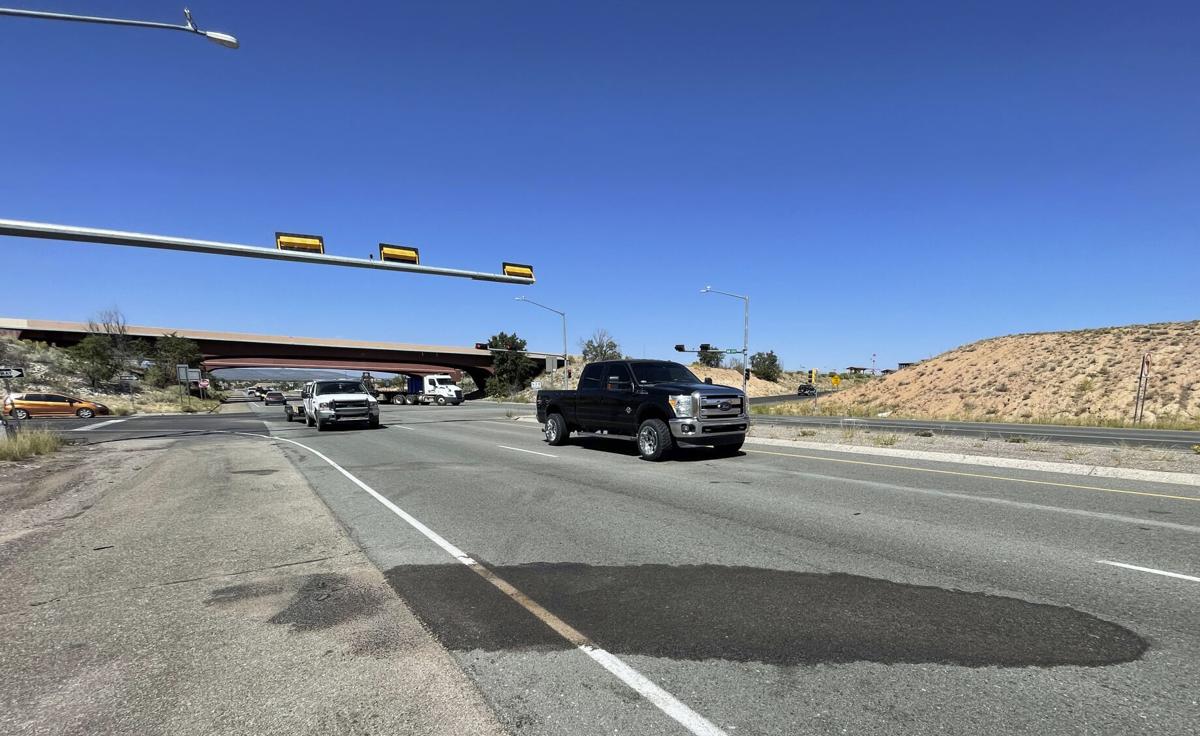 The oil slick left from the crash that killed John Derek Griego and Bryana Trejo-Griego at the intersection of N.M. 599 and Interstate 25 could still be seen Friday.

Daniel Martinez clears weeds Friday from a descanso for his cousin Bryana Trejo-Griego and her husband, John Derek Griego, at the intersection of N.M. 599 and West Frontage Road. The couple died in a crash earlier this month, the day before their first wedding anniversary.

JD Griego and Bryana Trejo Griego at their wedding Sept. 6, 2020.

Daniel Martinez puts water in a vase for a descanso for John Derek Griego and Martinez’s cousin, Bryana Trejo-Griego.

The oil slick left from the crash that killed John Derek Griego and Bryana Trejo-Griego at the intersection of N.M. 599 and Interstate 25 could still be seen Friday.

Friends say it was love at first sight when John Derek Griego and Bryana Trejo-Griego met in 2012. They were together for eight years before their wedding Sept. 6, 2020, a joyful celebration amid the challenges of the COVID-19 pandemic.

Just a day before the La Cienega couple would have celebrated their first anniversary, 39-year-old Griego, known as JD, and 29-year-old Trejo-Griego were struck by a driver witnesses said was traveling fast, weaving in and out of traffic, and had run a red light before the crash.

Griego was killed on impact, while Trejo-Griego succumbed to her injuries later that night at a local hospital, according to the Santa Fe County Sheriff’s Office.

Their deaths have left family and friends heartbroken and searching for justice.

The driver of the Chevrolet truck that struck them, 52-year-old Andres Lira-Hernandez of Albuquerque — who was arrested on outstanding warrants tied to a DWI case and then released from jail a couple of days later — had not faced any criminal charges or traffic citations in the crash as of Friday.

“Twenty-eight years just wasn’t enough time,” said Trejo-Griego’s mother, Deborah Trejo. “Every second without them both has left me beyond shattered and broken.”

She added, “I was blessed with Bryana for my daughter and JD for my son-in-law. They were both truly my bright lights in this dark world.”

Turner and close friend Niko Gurule had met Trejo-Griego in middle school in Española. The friendship continued into adulthood and eventually included Griego, who had met his wife through their state jobs.

“She was head over heels for him right away,” Gurule said. “Their wedding was very joyous. Everybody was in high spirits and congratulating the couple after years of us bugging them [to marry].”

The pair were artistic. Griego was a talented sculptor and airbrush artist, and Trejo-Griego was a painter and jeweler. They often would attend art markets and conventions where they shared their work with others, Gurule said.

They also shared a love for animals and acquired numerous pets, including a snake, several chickens, two fish and a rescue dog named Neggs — to name a few.

The sudden loss left Turner and Gurule astonished and grief-stricken, but they said the couple’s deep love offered some solace amid the tragedy.

“We couldn’t have one without the other,” Turner said. “The thing that’s bringing us peace right now is that they’re together forever.”

Still, the Griego and Trejo families have expressed outrage at the legal process that has allowed Lira-Hernandez to continue driving on New Mexico roads.

Witnesses told sheriff’s office investigators Lina-Hernandez had been driving south on N.M. 599 the afternoon of Sept. 5, according to a report. One man said the Chevy truck passed him at a high rate of speed and was frequently switching lanes. When they both arrived at the intersection of N.M. 599 and West Frontage Road, the witness said, he and the Chevy driver came to a stop at a red light.

But as they continued to the next intersection, the witness said, that light turned red as well, and the truck kept going.

Griego, driving a Hyundai with his wife in the passenger seat, was making a left turn onto N.M. 599, according to the report. In that moment, the witness told deputies, he saw Lira-Hernandez strike the vehicle on the driver’s side.

When asked whether charges might be filed in the case, sheriff’s office spokesman Juan Ríos wrote in an email, “The Accident Reconstruction Team has 10-days to submit their initial incident report related to this fatal [crash] and up to 30-days to finalize and submit their final report.”

After the report is complete and the cause of the accident is known, he added, charges could be filed.

Lina-Hernandez was arrested at the scene on outstanding warrants alleging probation violations in a case in which he pleaded guilty to a 2019 DWI offense. Three warrants were issued after he failed to register for DWI School and a victim impact program and failed to report to a probation officer.

A Bernalillo County Metropolitan Court judge ruled in a hearing Wednesday the court no longer had jurisdiction over the case because Lira-Hernandez’s probation period ended in July.

Lauren Rodriguez, a spokeswoman for the 2nd Judicial District Attorney’s Office, said, “Our office subsequently moved to revoke his probation on two separate occasions due to his repeated failures to comply with the terms of probation. Our motions were denied by the court.

“We are disappointed to learn that Lira-Hernandez is now under investigation for a homicide in Santa Fe despite our efforts to have his probation revoked,” she added.

Lira-Hernandez was charged in 2015 with leaving the scene of an accident and other misdemeanors after he was accused of causing a three-vehicle crash, court records show. Those charges were later dismissed.

He now faces a lawsuit following a crash in 2020. The suit alleges he failed to stop at an intersection and hit another driver.

“This all just progressed to JD and Bryana’s deaths,” he said. “The court is kind of guilty for allowing him back on the street even though he should not have been driving.”

Martinez noted Griego was an “excellent driver” who had worked at the state Department of Motor Vehicles for nearly 13 years.

“We want to make sure that he pays for what he did, and that’s pretty much it,” he said of Lira-Hernandez.

But, he added, he doesn’t believe Lira-Hernandez deserves “to be out, eating with his family or going to work, making money, having a living, going to nice house. … He doesn’t deserve to be free.”

This accident happened 9/6. The county has another 2 weeks to make a decision on prosecuting. Let's give the county a chance, after which, should nothing happen,, pile on at will.

Warrants were out for his arrest, the question is how did it go so long without a followup?

Let’s get the name of that judge and make sure he is voted out in the next election. Why didn’t the reporter mention his name?

The public can help by calling the District Attorney’s office and telling them that our roads are not safe with this fugitive not behind bars! His record shows that he has no regard for anyone’s safety

Our DA would put him in a "restorative justice" program.......

"The court is kind of guilty...." Seriously? How about clearly culpable. The driving laws here in New Mexico - and the complete lack of enforcement thereof - are a travesty and an embarrassment. This is not okay. I think we need a new law: Any judge or law enforcement agency that allows a driver like this to go back on the streets should be held criminally liable the next time this excrement causes an accident, and should face the same homicide charges (and be incarcerated for life) when such a pile of fecal matter kills someone. Accessory to murder. Period.

The NM judiciary and our bail laws are a threat to civilized society. We are truly on our own now. Whether it be defending yourself against criminals or being extra wary on the roads due to the catch and release system that puts people like Lira-Hernandez back on the street, just be careful, wary, and ready out there.

As far as driving? Given I live near Alamo and US 84/285, I am so used to drivers barrelling down the hill going north and running the red light at highway speed that I look twice in all directions before entering an intersection. And thankfully, Santa Fe has not become Albuquerque North with homicides---yet.

This is a failed state.

Indeed Khal, and just wait until a high % of people driving are high on legal pot, the courts and law enforcement are not prepared to handle the human carnage.

Grow some balls and charge this guy with homicide. Unless you want us out in the streets?

Lupe, I feel for the SFCS. They know they can charge this guy with homicide and he'll be back on the street by the time the paperwork is filed. The judge in Albuquerque freed him from any consequences even though he laughed at his probation responsibilities.

We keep rewarding the system by electing the same old people to do the same old thing. And the GOP opposition is for the most part a clown car. It is pretty frustrating.

[thumbup] But Lupe will never admit any left wing Democrat is the problem......

Jesus Christ Mike, You just can't help yourself from being the non-constructive fly in the soup. What is it with you and your label calling BS. How does this advance the conversation or are you just here cuz you have no life?

The ‘judges’, the ‘courts’; this has become an all too familiar drum beat in our spiraling decent and it needs to stop. If the judicial system is supposedly acting according to New Mexico law, then the law obviously needs to change. This has become the focus of much attention lately at least according to some local news stations. If the judges themselves are to blame, may Heaven help you. The crimes vary—from DWI on up, you name it, the judicial system has wreaked havoc on our state one way or another, change my mind. These were good people, may your souls rest in peace.

That bail "reform" amendment we passed had gruesome unintended consequences. We need to rewrite that. Pronto.

That's true. I think this article sums it up. https://www.abqjournal.com/1336001/nm-bail-reform-needs-to-be-fixed.html

Agreed Khal, but the left wing will not do that, as we know, they created it and are proud of it, defending it at every turn.....and the Catholic Bishops and ACLU are solidly behind it....https://www.santafenewmexican.com/news/legislature/bail-bill-passes-house/article_a0fc1fce-d7c8-55b0-bb96-22682d191bec.html