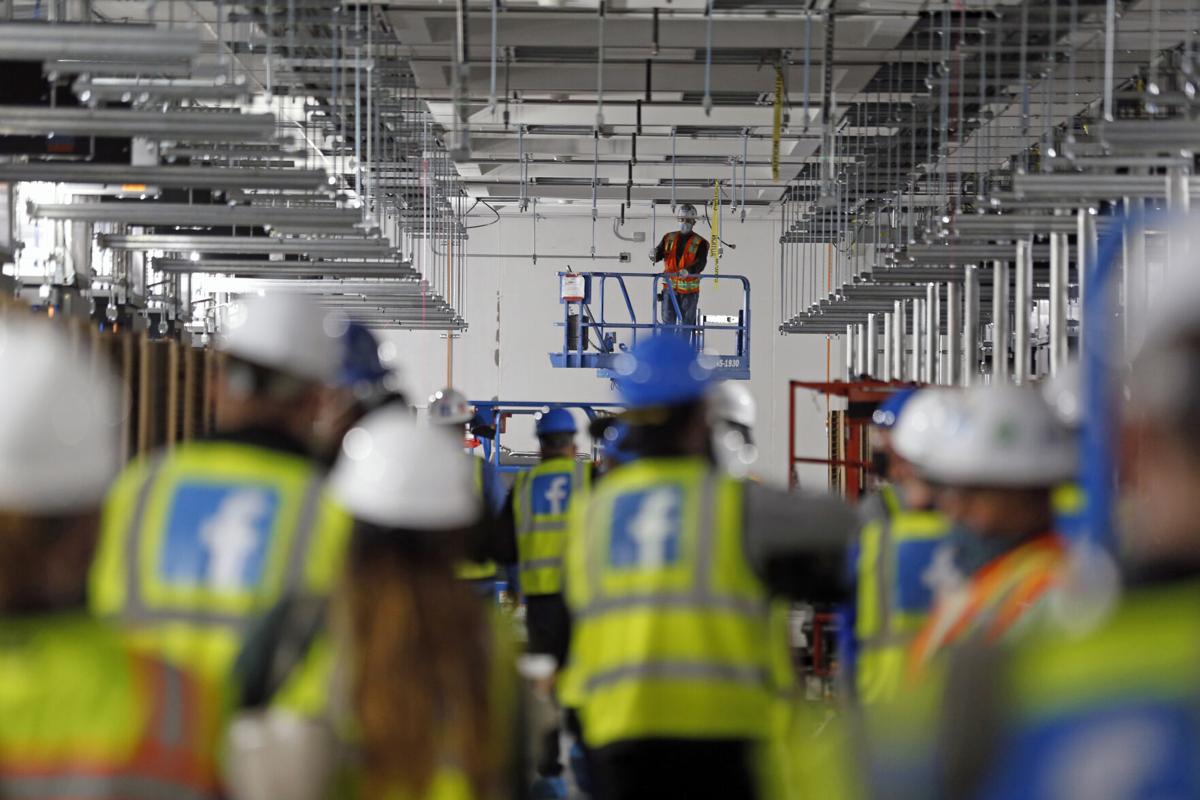 A media tour goes through one of the data halls under construction Wednesday at the Facebook data center in Los Lunas. 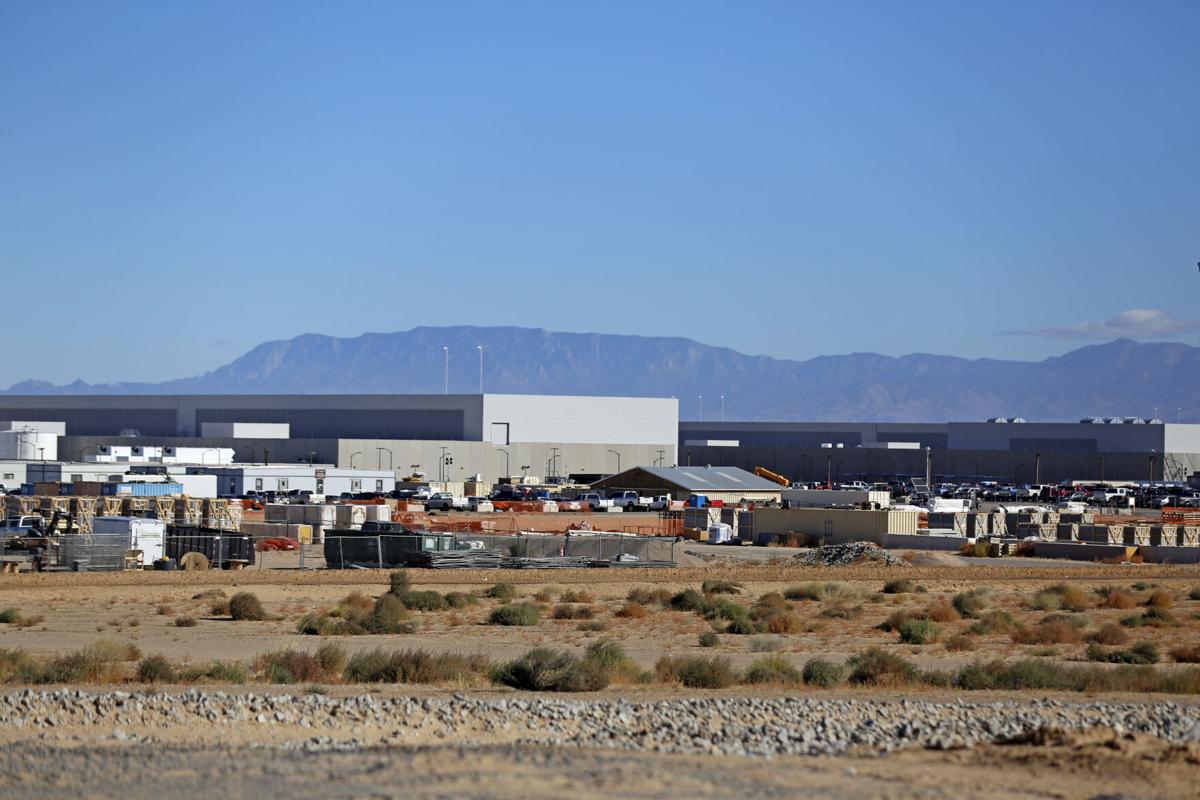 The Facebook data center on Wednesday in Los Lunas. 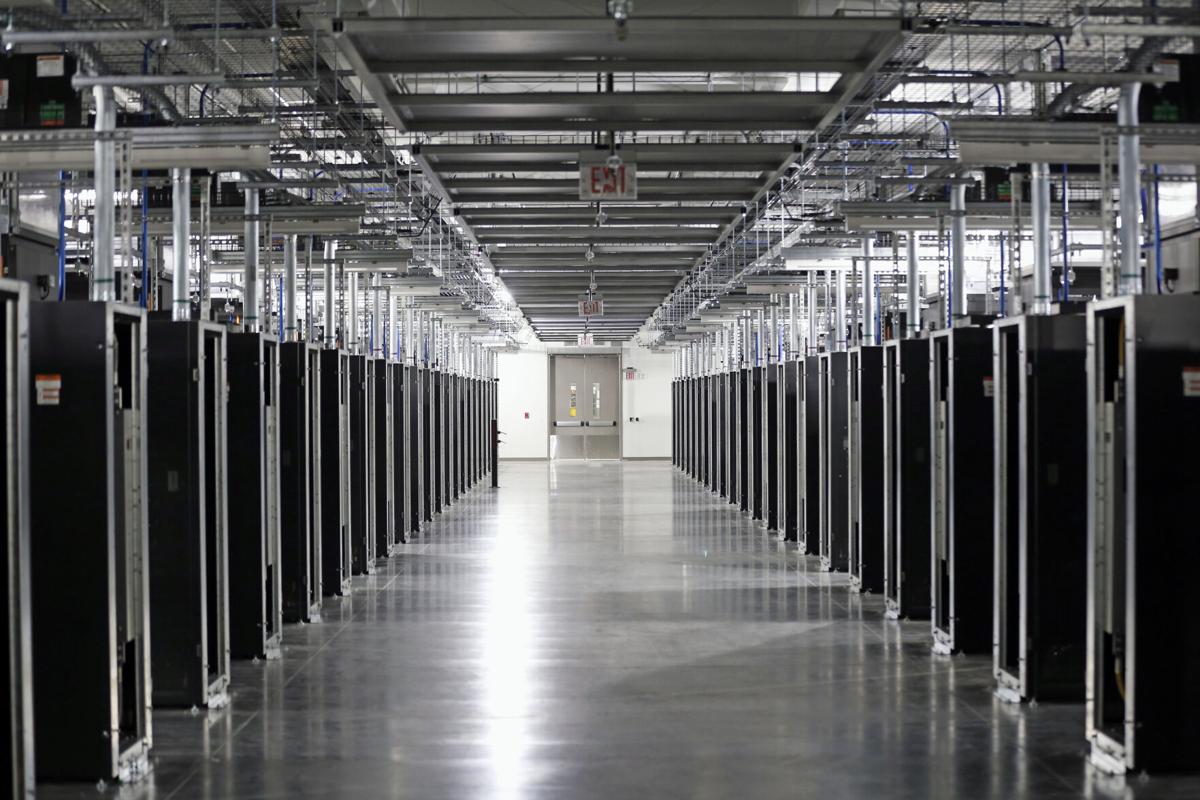 A data hall at the Facebook data center in Los Lunas on Wednesday.

A media tour goes through one of the data halls under construction Wednesday at the Facebook data center in Los Lunas.

The Facebook data center on Wednesday in Los Lunas.

A data hall at the Facebook data center in Los Lunas on Wednesday.

LOS LUNAS — Facebook is gearing up with more convention center-sized buildings and tons of technology for its ever-growing world of social media.

The company led a media tour Wednesday to show off two data-storage buildings under construction and to indicate where two more buildings will be erected on its 751-acre campus south of Albuquerque. Those four buildings will increase the total number of data-storage facilities to eight at the Los Lunas site and give the company a total of 3.8 million square feet of space there.

“The scale of this is enormous,” said Joe Vlastelicia, senior project manager for Fortis Construction of Portland, Ore., the general contractor on the project.

As Tony Perea, site manager for Facebook, led people through one structure, he said: “Essentially the size of this building is four football fields.”

The data centers are designed to hold network equipment, fiber connections, hundreds of servers and other technology to help store and distribute the text, photos and videos of Facebook, Messenger, WhatsApp and Instagram.

Facebook spokeswoman Melanie Roe said the company has 18 such data compounds around the world, including 14 in the U.S. She said all Facebook facilities are entirely powered by wind and solar energy.

Facebook also sought Wednesday to publicize its community service work in Los Lunas and New Mexico at a time when the company is facing public criticism and political pressure.

Documents recently turned over to the Securities and Exchange Commission and statements by employee-turned-whistleblower Frances Haugen have suggested the company has prioritized its profits while its platform has been used to disseminate misinformation about the coronavirus and other topics.

A Facebook spokesman wrote in an email: “At the heart of these stories is a premise which is false. Yes, we’re a business and we make profit, but the idea that we do so at the expense of people’s safety or wellbeing misunderstands where our own commercial interests lie.

“The truth is we’re on track to spend more than $5 billion this year alone on safety and security and have over 40,000 people to do one job: keep people safe on Facebook.”

On Wednesday, Facebook had state, county and town officials on hand to talk about contributions made by the company. Those include a plan to provide free Wi-Fi and internet service to 900 low-income residences in Valencia County and investments in water efficiency and water restoration statewide.

“They’ve gone over and above” what’s necessary, said Mark Roper, division director of the state Economic Development Department. About 200 employees, including contract workers, currently work on Facebook operations at the Los Lunas plant, and 400 will work there when the four additional buildings are done, the company said.

More than 1,000 construction workers are consistently at the site, said Charlie Tomlin, construction project manager for Facebook. Vlastelicia of Fortis Construction said the package of eight buildings is expected to be completed by late 2024.

Facebook and Public Service Company of New Mexico cleared a hurdle Wednesday when the Public Regulation Commission approved an energy-storage agreement for the companies that had been in limbo for months. The commission argued PNM sought more storage for the Facebook project than was needed, and the utility eventually agreed to an amount that put the PRC at ease.

Commissioner Joseph Maestas of Santa Fe said Wednesday: “I think this is good for the area of Los Lunas, and it’s good for the state of New Mexico.”

Facebook started turning earth for buildings seven and eight a couple months ago, so the situation wasn’t dire. But construction has been a constant.

Why does such a big powerful profitable company get a tax exempt ride from a distressed area?

I wonder how much water they do and will use for cooling.

I'm sure that the concern about water has not ever been taken into account when the decision was made to allow Facebook to expand its operations.

From the facebook page for the Los Lunas data center:

“Today, we are also announcing a new goal to restore 200% of the water our data center consumes into the New Mexico watersheds. To date, we have invested in a total of five local water restoration projects, and in 2020, these projects restored approximately 64 million gallons of water right here in New Mexico.”

If they restored 64 million gallons of water in 2020, that would suggest they use 32 million gallons per year if they met that 200% “goal” which they may or may not have done.

Something else people should think about though it’s too late to do anything about this installation, is that facebook is doing water restoration projects in New Mexico but I’d be surprised if they offset water use in Los Lunas. They said New Mexico “watersheds” - plural - so I suspect the projects could be anywhere. Maybe they are all benefitting Los Lunas, though, but if not that won’t help the people of Los Lunas make up for the water the data center will use / is using.

Trusting Zuckerberg on all the “benefits” facebook will be providing New Mexico is pretty foolish. He lies whenever it suits him. He told congress they stopped 94% of all hate content when the leaked documents showed they only pull less than 5%.

I wouldn’t be surprised if facebook ultimately kills Los Lunas but who knows?

Again Robert I am in agreement.

As am I, but now Facebook will be called "Meta"......no doubt another ruse of some kind.....https://www.cnn.com/2021/10/28/tech/facebook-mark-zuckerberg-keynote-announcements/index.html

Mike, they can run but they can’t hide from taking advantage of children. It is beyond me why any one would use their site if they didn’t have to.

I do wonder if Mr. Fields would agree with me that the new age robber barons, like Musk, Zuckerberg, Bezos, Dorsey, Sage, Brin, etc. are the worst indictment of capitalism and an embarrassment to all real capitalists, just as Rockefeller, Carnegie, Mellon, Morgan, etc. were when Teddy went after them. Do you agree Mr. Fields? If so how do we go after them as Teddy did?

I do agree. Some are worse than others but they are all simply too big and too powerful. As part of the recent facebook controversy it came out that employees who knew were alarmed and amazed at how much money facebook was lobbying politicians with.

We need to raise taxes on billionaires. The now dead tax plan would have raised taxes on those with over a billion dollars in assets or over $100 million in income for three years. All 700 of them. That’s it. That tax change would have only impacted approximately the very tip top 700 wealthy in the US. But it’s dead. Manchin and Sinema killed it.

We also need to end the Citizens United thing that treats corporations like people. No matter what Romney says, corporations are not people and shouldn’t be allowed free speech rights to donate to campaigns the way citizens can. Our government needs to have the external monied influences removed.

The problem we have is republicans and two democrats refuse to tax the rich appropriately, and too many think the Citizens United ruling should stand. Those are two big bricks blocking a congress acting on Americans’ behalf instead of for the rich and corporations at Americans’ expense. Taxing the ultra rich and removing their outsized influence are the first steps to fixing the situation.

And before anyone chimes in about high taxes under the Biden bill being unfair to billionaires, the billionaire tax is dead now but it was going to impose a 23.8% tax on capital gains. That’s still 4.2% less than Ronald Reagan slashed capital gains taxes to in 1986. (George W. Bush cut them further to a max rate of 15%)

People should be rewarded for hard work and innovation but these billionaires pay little to nothing in income taxes using every tax shelter and dodge they can and they have tax experts and lawyers to make certain they pay as little as possible. They game the system because they can while putting huge burdens on the country’s infrastructure.

“Michael Bloomberg managed to do the same in recent years. Billionaire investor Carl Icahn did it twice. George Soros paid no federal income tax three years in a row.”

“The data provides an unprecedented look inside the financial lives of America’s titans, including Warren Buffett, Bill Gates, Rupert Murdoch and Mark Zuckerberg. It shows not just their income and taxes, but also their investments, stock trades, gambling winnings and even the results of audits.”

Interesting read if anyone wants to get upset over how much the rich game the system.

But let's put aside that taxing wealth, whether billionaire's wealth or of others, is most likely unconstitutional. Democrats never seem to want to enact laws that comply with our US Constitution. Oh, being successful, even to the tune of generating billions of dollars in wealth, is not illegal (nor should it be). Thankfully we live in a country driven by a capitalist engine rather than by the sweet, sticky fumes from the sewer of socialism.