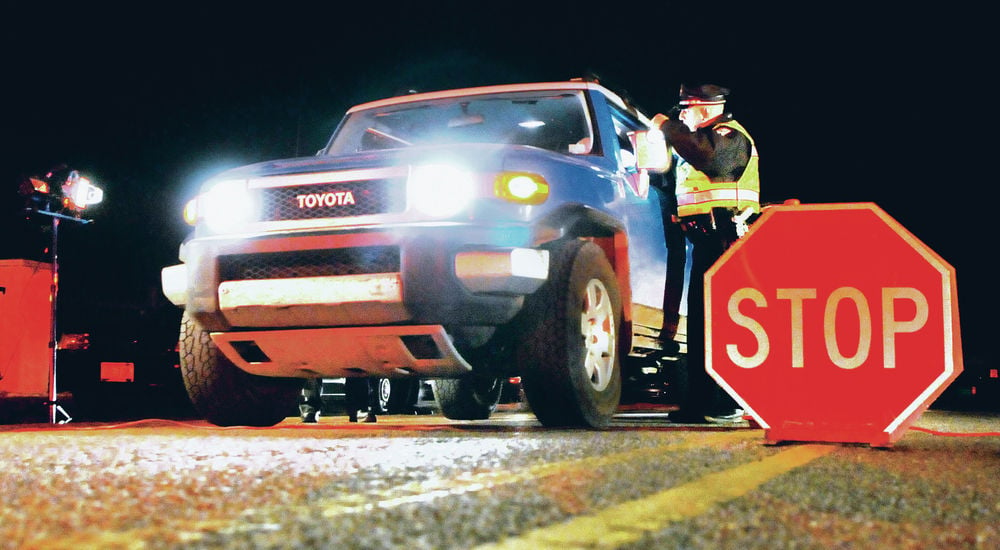 A state police officer questions a driver at a DWI checkpoint in Santa Fe County on Jan. 14, 2011. Of nearly 1,000 DWI cases in the county in 2014, nearly 37 percent filed in Magistrate Court were dismissed. In District Court, the dismissal rate was about 31 percent, according to a report issued earlier this year by the Administrative Office of the Courts. Clyde Mueller/New Mexican file photo 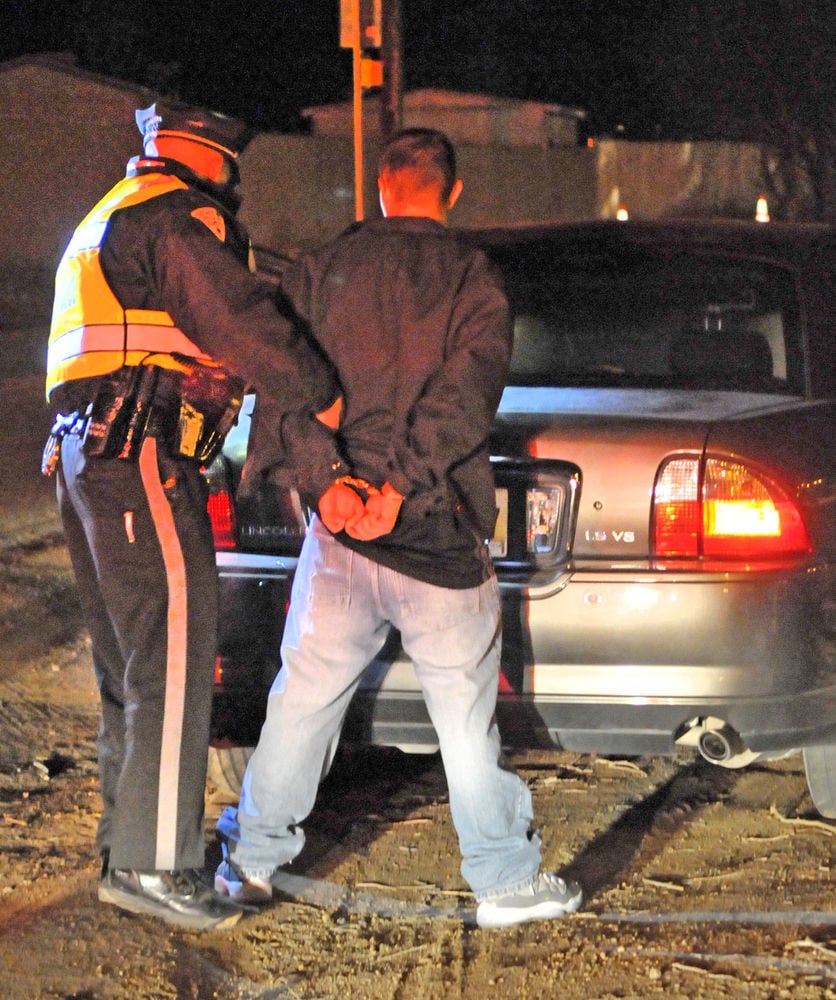 A New Mexico State Police officer arrests a driver during a stop at a DWI checkpoint in January 2011. Clyde Mueller/New Mexican file photo

A state police officer questions a driver at a DWI checkpoint in Santa Fe County on Jan. 14, 2011. Of nearly 1,000 DWI cases in the county in 2014, nearly 37 percent filed in Magistrate Court were dismissed. In District Court, the dismissal rate was about 31 percent, according to a report issued earlier this year by the Administrative Office of the Courts. Clyde Mueller/New Mexican file photo

A New Mexico State Police officer arrests a driver during a stop at a DWI checkpoint in January 2011. Clyde Mueller/New Mexican file photo

Drunken driving is a serious problem in Santa Fe County, but the conviction rate is nothing to brag about.

Of nearly 1,000 DWI cases in the county in 2014, nearly 37 percent filed in Magistrate Court were dismissed, the ninth highest rate in the state for Magistrate Court dismissals. In District Court, the dismissal rate was about 31 percent — the 13th highest rate for the state’s 33 counties, according to a report issued earlier this year by the Administrative Office of the Courts.

And in both courts, the study says, many of those cases were dismissed by the prosecutor.

The study did not include Municipal Court, where DWI cases also are filed.

Santa Fe County’s DWI conviction record is worse than the state’s as a whole. In 2014, New Mexico’s conviction rate was 78.2 percent in District Courts and 70.1 percent in Magistrate Courts. Santa Fe’s neighbor to the north, Rio Arriba County, had the highest Magistrate Court dismissal rate — 63.1 percent. A story in the Rio Grande Sun linked it to turnover in the sheriff’s office.

But what is going on in Santa Fe? Why do judges seem so lenient here?

Tom Starke, head of the Santa Fe County DWI Planning Council, pointed to a variety of possible explanations for the low conviction rate, including high turnover among law enforcement officers. Cases get dismissed, Starke said, when officers don’t show up for a hearing because of other work or because they have left the department.

Stark said his organization was concerned about the numbers when they were published in May. He said the council usually relies on data from the state Department of Transportation, and those numbers are better. Nonetheless, the council is “concerned about the conviction rate and would like to see higher or better processing of cases or better selection of when a DWI citation is issued,” Starke said.

The council is bringing in Margaret McLean, former director of the Criminal Appeals Division at the New Mexico Attorney General’s Office, to help train law enforcement officers in making DWI cases, he said.

“We are also working hard to integrate law enforcement agencies to work with the DA’s office” to “help law enforcement teams understand what the issues are, the problems the DA sees and make adjustments.”

For new officers, Stark said, the paperwork can take four hours or so. “If the information they get in a police report is incomplete or something doesn’t look right about the arrest, prosecutors sense how the court will view the case and will dismiss one where the evidence doesn’t quite look right,” he said.

And sometimes the prosecutor will dismiss DWI charges when the defendant is also charged with another serious crime, such as assault.

A police department’s policy regarding DWI could also be a factor in some cases, Starke said. In some places, officers write up only the strongest cases and conviction rates tend to be higher. But if they are being aggressive and write up every case they believe to be a DWI, Starke said, “We may be getting a lot where the prosecutor thinks it is not strong enough. Not all cases are equally good. And some counties might have a higher bar.”

Yalman said she finds that the biggest issue is that the arresting officer is no longer employed by the department and unavailable to testify. The years where the dismissal rate is the highest, she added, occur when there is no DWI officer employed by the city.

Other dismissals occur when either the police made a misstep or the evidence was not made available in a timely fashion, Yalman said.

Recently, for example, she dismissed a drunken-driving charge because the prosecutor was not able to track down the member of the public who called the #DWI hotline to report the erratic driving.

According to Santa Fe County District Attorney Angela “Spence” Pacheco, DWI cases have become increasingly complicated. There’s a lot of paperwork, many technicalities and “a lot of moving parts,” she said.

She blamed many of the dismissals on judges’ suppression of evidence. Or judges may find that the officer didn’t have reasonable suspicion to stop the vehicle and everything from that point forward is disallowed.

The judges also will suppress evidence if it isn’t shared with defense lawyers 10 days before trial, she said, or the video comes in too late. “Not only do they want video from the police unit, but also lapel cameras. Police have video in the holding cell. Now they’re asking for that,” Pacheco said. “Then the case is dismissed and it has nothing to do with the DWI. It’s all these little technicalities.”

What she calls “technicalities” are constitutional protections in the eyes of others such as judges and defense lawyers.

Still, Pacheco says, “There is so much litigation on DWI. We’ve created all these little things we have to have in place. It’s easy for defense attorneys to look for these things.”

John Day, who has practiced law in Santa Fe since 1995 and accepts 45 to 70 DWI cases annually, said he doesn’t see Santa Fe’s dismissal rate as “a negative trend.” He said the numbers show that judges are weighing evidence carefully.

“Judges know that their dismissal rate is being watched,” said Day, explaining that judges don’t want to be perceived as soft on drunken drivers. “But they also have an obligation to uphold the Constitution,” Day said.

Record-keeping also can be an issue, especially for felony DWIs, despite new computer systems. The prosecutor has to show, for example, that the defendant was represented by an attorney in a prior conviction and has to go back to years when record-keeping wasn’t as good.

And scheduling is a big issue. “If you’re going to trial on 10 or 15 cases, you could have 15 to 25 officers and they all have to be interviewed before they go to trial. That’s always a chore.”

She says prosecutors are trying hard to get convictions, “but we have all these obstacles. We’re definitely doing the job. The challenge is all these little things. They suppress, then we say, ‘OK, your honor,’ and then they tell us to prepare the dismissals.”

Andrew, the constitution of the United States gives you certain protections. If an officer violates any provisions, such as not having sufficient reason for the stop, not enought probable cause for the arrest, refuses to collect or turn over evidence, fails to show up for an interview or trial then the case cannot and should not move forward.

I can say this without reservation. I was in law enforcement for over 20 years.

I have also watched a DWI docket in magistrate court when a friend was accused of DWI. I was quite impressed with the judge who presided over the docket on that day. He knew what he was doing, the attorneys, especially the ADA, moved their cases efficiently, and each party was treated fairly, even those who were sentenced on that day.

I suggest you do this before you make such uninformed statements.

Oh Please Donald… Let’s not hide behind the protections of the Constitution to excuse gross prosecutorial incompetence, ridiculously lenient sentences handed down by judges and shoddy police work… I too have witnessed my fair share of the DWI docket in Magistrate court. And I can tell you, I was far from impressed.

In one day alone, I personally witnessed 2 DWI’s summarily dismissed. One simply because the prosecutors were not prepared to go to trial that day and the other, because the prosecutors brought the wrong files. --- On the another day, I witnessed a 3 time DWI offender, get sentenced to 20 hours of community service…No jail time and No Fine! To add insult to injury, the 20 hours of community service was then suspended because he attended 5 AA meetings. He was only required to attend 5 more and case closed… There really is no need to touch on the shoddiness of police work. The SFPD’s reputation speaks for itself.

But I do have to say, its lackadaisical attitudes like yours that have allowed this kind of ineffectual bungling to permeate our Judicial System and make our courts a laughing stock. The only way we can change things is if we stop accepting excuses for substandard performance and start holding judges, prosecutors, police officers and criminals accountable for their actions.

I would hate to say that you are being less than truthful, but you certainly didn't watch a magistrate court docket.

First of all, trials are not scheduled on the DWI docket, so you saying that the cases were dismissed for the reasons you stated is questionable.

A third offense DWI offender would not be sentenced to just community service. This is also questionable.

How about we meet at the next DWI docket of your choice. We can see what happens and then write an Op-Ed piece together to the SFNM. What do you say?

This is inexcusable. Basically, it all boils down to a negligent and incompetent District Attorney. Worthless Judges, and the Police not doing their jobs....

A good lawyer is worth his or her weight in Gold. Ask O.J !