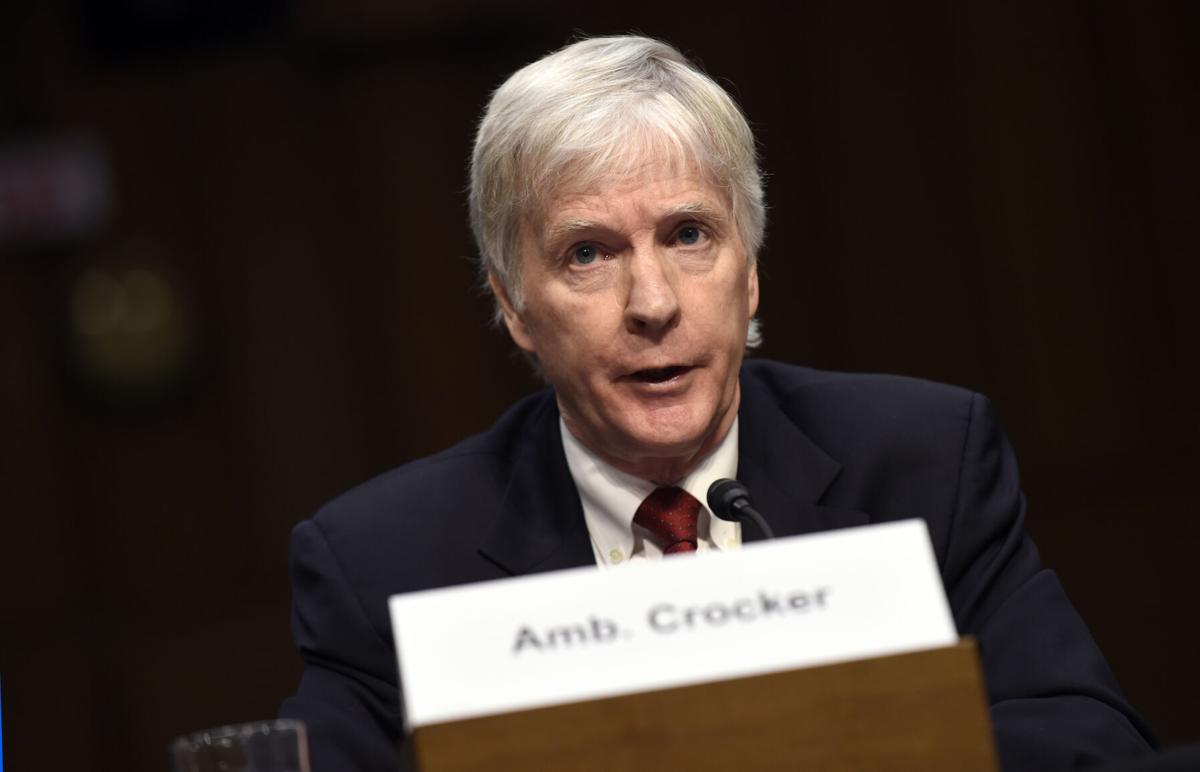 Ryan Crocker is a career diplomat who served the U.S. government throughout the Middle East, but his name and work are linked to two post-9/11 postings: Iraq from 2007-09 and Afghanistan in 2011-12.

He helped establish the U.S. Embassy in Afghanistan in 2002 and has been highly critical of the U.S. government’s decision to withdraw troops from the country 20 years after they arrived.

Now retired, Crocker, 72, recently spoke with The New Mexican by phone about America’s actions in Afghanistan and the potential consequences of its abrupt departure.

Question: What are the chances ISIS or another version of al-Qaida could do what it did in 2001?

Answer: Our defenses are infinitely stronger than they were then; it would be much, much harder, I think, for any strategic adversary to carry out that kind of attack. But I can’t say we don’t need to worry about it anymore, particularly in view of what we’ve just seen in Afghanistan. The Taliban are back in control. … They never broke their linkages to al-Qaida. … They’ve taken 20 years of exile instead, and we are already seeing an al-Qaida return.

They are putting the band back together, and this not a theoretical threat. These are the guys who brought us 9/11. Our defenses are better now, but we can count on a determined reentry and them working on trying to figure out how to penetrate better.

The Taliban is proclaiming the defeat of the infidels by the band of brothers clad only in the armor of the one true faith. The psychological boost to violent Islamic groups is huge. It could do wonders for recruitment and fundraising.

Question: Do you consider Afghanistan a failure of policy, of vision or simply an impossible mission, given its tribal nature and weak history of democracy?

And then we ran out of patience. We just decided we are done, we’re gone. … That was the only strategic change in all those years, and now they occupy the whole country in a matter of days.

Question: The U.S. military, according to published reports, was trying to transition out of a counterterrorism mode as Afghanistan wound down and the world changed. Is that wise now that Afghanistan is back in Taliban hands?

Answer: I guess I don’t see that the same way. What President Biden has been saying very consistently is that we need to focus on security challenges around the world, not just like in places like Afghanistan. We need to have a counterterrorism focus in a lot of different places, because the world has changed since 9/11. I see him saying we need to do more in a lot of places. Yeah, that is true. But it doesn’t mean we should take our eye off Afghanistan.

Question: In your New York Times op-ed, you said time and patience had to be part of the U.S. calculus in Afghanistan. Given the American mindset, and our enemies’ ability to wait it out, should the U.S. ever commit to long-term conflicts?

Answer: We don’t commit to long-term conflicts. … If they do become long term, that is when we start getting edgy and looking for the door. … We have created an atmosphere in which our allies worry about our commitment and our patience and our enemies count on that impatience. [The way we pulled out of Afghanistan] will reinforce the fears of allies and increase courage and confidence of our enemies.

Question: Do you blame the disaster of the past few weeks at the feet of Biden or Trump or at the doorsteps of many?

Answer: There is good news and bad news. The good news is on a really important issue involving our core national security, two very different administrations agreed on one point. The bad news was it was on complete withdrawal from Afghanistan. ... It’s a huge strategic blunder. [There is] plenty of blame to go around. … It did start with President Trump. He authorized negotiations with the Taliban and that was the beginning of the end. … The weight of blame clearly rests with Biden because he made the decisions as president, but Trump left him with a very, very poor hand to play.

Question: What would you have done differently?

A: We had gotten to the point where, with a minimum number of forces, we could support the Afghan forces. There are a lot of problems out there in the world that can’t be completely fixed, but they can be managed, and this was one. … Again, we went from 100,000 to less than 10,000 [troops in Afghanistan] without the Taliban begin able to hold any significant town.

It was costing us very little in blood and treasure and it was our insurance policy against another 9/11. I would argue the premium on that policy was pretty cheap. We didn’t need to run the risk of a complete pullout; we could manage pretty well with a minimal force no longer there for direct combat.

Question: Are we right back where we started, 20 years later?

Answer: Yes, and that’s a scary thing. It’s the 10th of September all over again.

Crocker's a total loser, who helped us get mired in Iraq and Afghanistan at the cost of Trillions of Dollars. Why run this guy's stuff?? Celebrating loser's week?

Surely we have local losers to write about, and perhaps do some good... but that's asking too much. Mustn't mention the New Mexican and "doing some good" in the same sentence. Perhaps running Crocker is EXACTLY what the New Mexican is about, and has been ever since Ray Rivera left town. Pathetic losers.

Former ambassador Crocker seems to be stuck in the 19th century. HIs imperialistic approach of permanent residence of a Western Empire in a "backward" country to maintain influence is misguided. The entire world is suffering from the Age of Imperialism today and will in the future. China's animus is a reaction to its experience with Western Imperialism: first there was Mao tse Tung, then Deng Ziao-ping, and now Xi Jingping. All three Chinese leaders have viewed the west as an adversary. India is in the same place, and has lost its way from Mohandes Gandi becoming more not less wary of Western involvement. Our support of Pakistan has certainly not helped the situation while driving India into the arms of the Soviet Union and now Putin to keep China at bay along their common border. The reason we invaded Afghanistan was to hunt down Al Queda and bring Osama bin Ladin to justices. And where did we find bin Ladin? In Pakistan where we had to deceive and stonewall our erstwhile ally so we could kill bin Ladin. Talk about your level of trust. The less blood and treasure, no matter how small of an amount, we spend in this part of the world the better. The sooner we dramatically reduce our need for fossil fuel, the sooner our need to be involved in the Middle East will diminish. As to patience, the American electorate has been ore than patient after the Vietnam experiment. Biden made there right move. All the gnashing and moving will fade, and we will all be grateful to be out of there in a year or two while we focus on beating the current pandemic, and dealing with the consequences of climate change.

A thoughtful analysis by the former Ambassador. He should have pointed out, however, that President Trump did have in place stopguards to complete withdrawal, those being compliance by the Taliban. To the agreement reached with the Trump administration and stability of the Afghan government in place. As the Takuban had broken the agreement, it is unlikely President Trump would have proceeded with complete withdrawal. None the less, I agree that complete withdrawal was ill advised and that both the Trump and Biden administrations should have recognized that we did indeed have a need for a small strategic presence long term in Afghanistan. One omy has to look at the deterrent effect that our “permanent” forces have had in Germany and South Korea. More sadly, with this botched withdrawal, our reputation with our allies and our enemies has been severely compromised.

“A failure of American patience”? Our troops were in Afghanistan for 20 years. 20 years!! Mr. Crocker is a crock!

9/11 was the Saudis. Not the Taliban. Not Iraq. 20 years invading Afghanistan/Iraq and we lost patience ? Glad Crocker is out of it. Misdirection as Foreign Policy has got to stop. Profit for Military Contractors is the game.

Who funds Madrassa teaching violent intolerant Islam worldwide ? Wahhabi /Saudis do. What does the US do ? Protect them.

If it seems like the cart is before the horse ? It is.

Agreed, it was indeed the Saudis. The Taliban knowingly permitted their terrorist training camps, though, and should have been made to pay a price for that. We were right to attack them, but we were wrong to stay in the country any length of time. It is not our job to nation-build and try to mold the entire world into what we ourselves consider the ideal (yeah right) form of government and societal norms. The pull-out would never have been orderly or clean, no matter when or how it was orchestrated, but it had to be done. Anyone who pretends they know how to have done it better is a liar (I am not applying this to YOU, Alexander, I am applying it to the Monday-morning quarterbacks on the right who suddenly pretend to care about the Afghans).