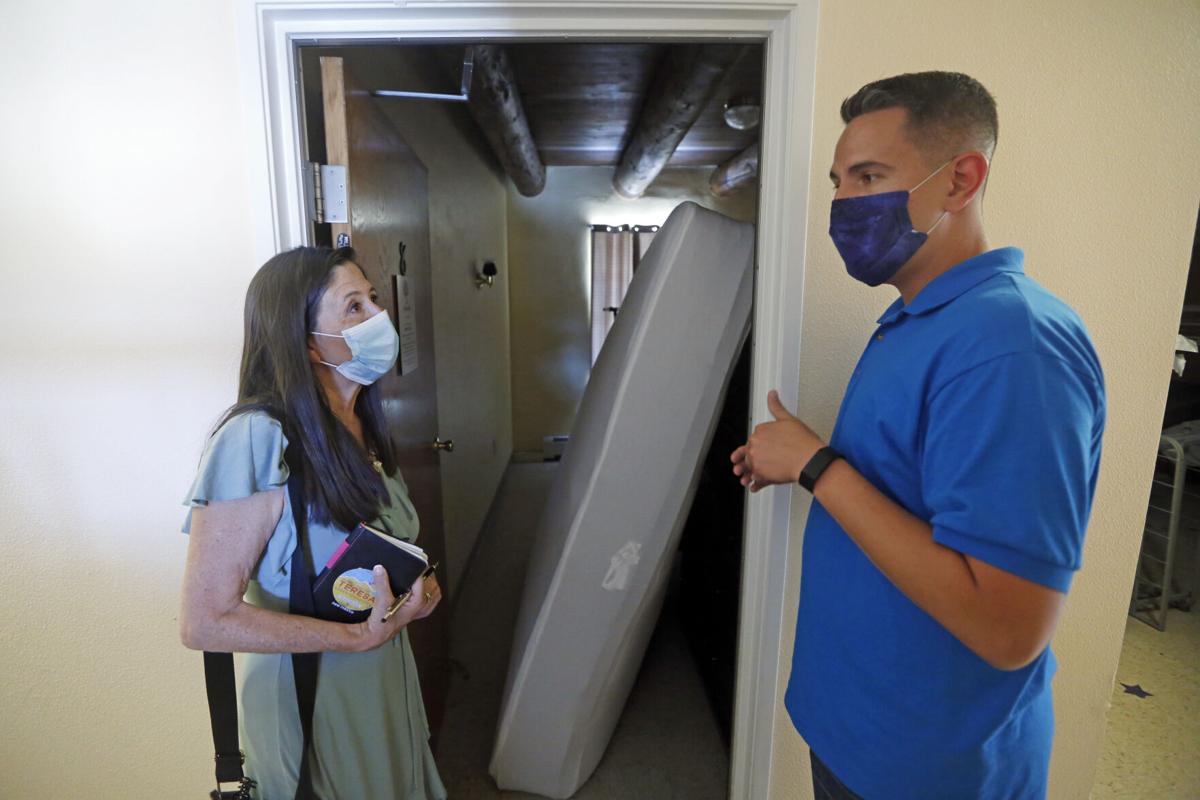 U.S. Rep. Teresa Leger Fernández speaks to Marcos Zubia, who lived at Esperanza Shelter in 1994 and is now director of development, during a visit Tuesday. The room they are standing in front of is the room Marcos stayed in. 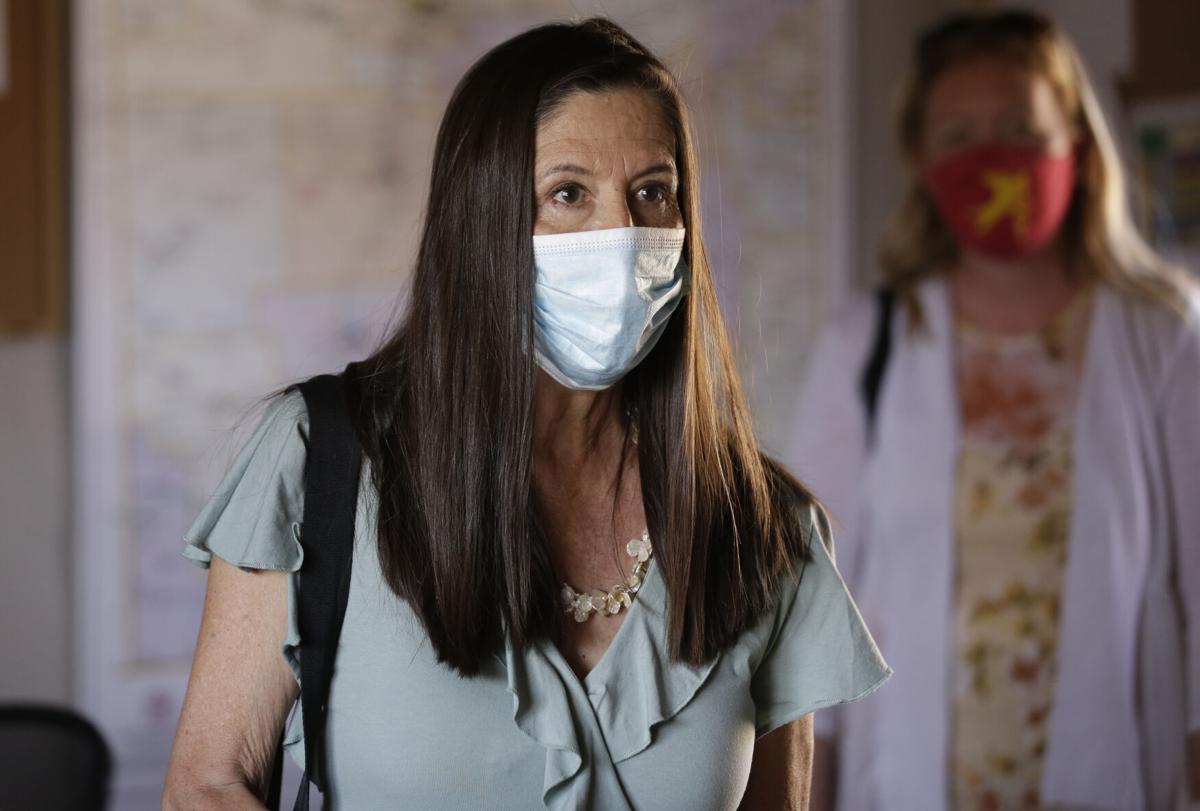 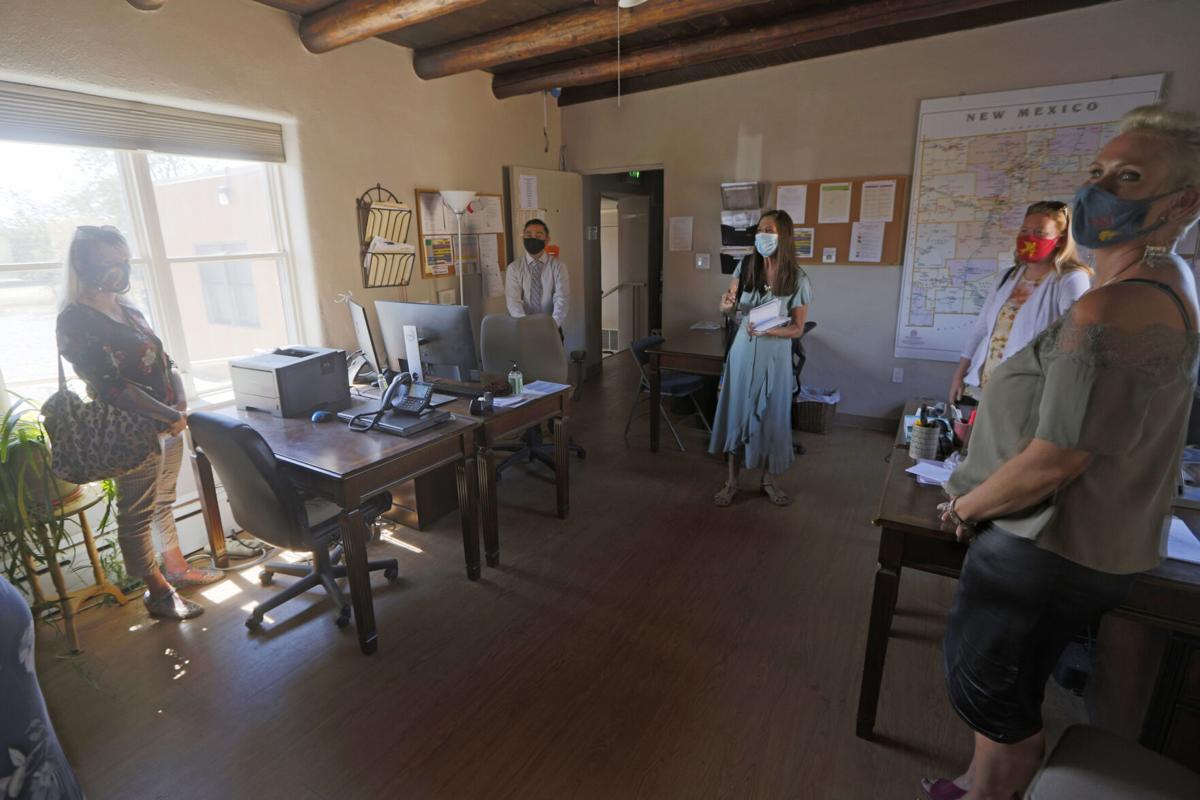 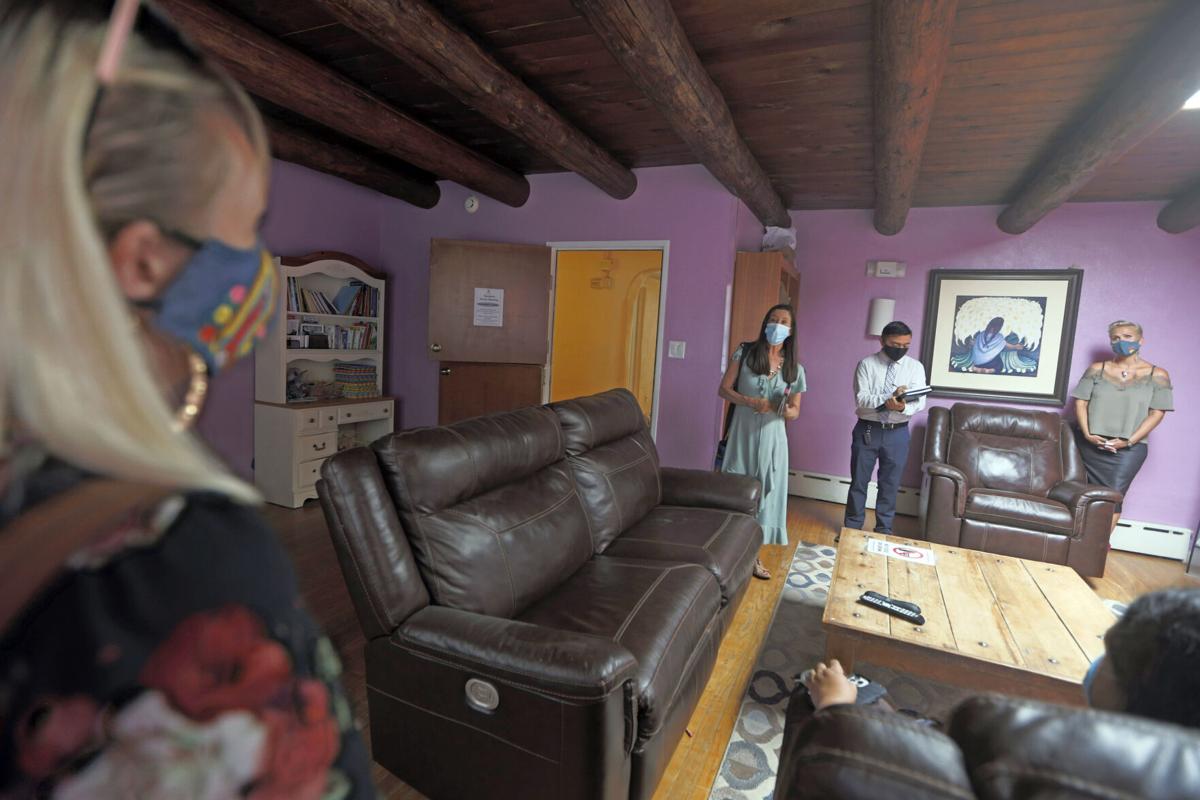 U.S. Rep. Teresa Leger Fernández, left across room, speaks to Sonia Romero, who lived at Esperanza Shelter in 2011 and is now the residential services manager, during a visit Tuesday.

U.S. Rep. Teresa Leger Fernández speaks to Marcos Zubia, who lived at Esperanza Shelter in 1994 and is now director of development, during a visit Tuesday. The room they are standing in front of is the room Marcos stayed in.

U.S. Rep. Teresa Leger Fernández, left across room, speaks to Sonia Romero, who lived at Esperanza Shelter in 2011 and is now the residential services manager, during a visit Tuesday.

Like many other shelters for domestic abuse victims, Esperanza Shelter in Santa Fe faced it share of challenges when the pandemic hit.

Chief among them: Many victims were forced to stay home with their abusers and could not find a safe place to make a call for help, said Anji Estrellas, executive director of the 45-year-old shelter.

“The number of domestic victims did not go down, but their ability to access help was hampered,” Estrellas said.

U.S. Rep. Teresa Leger Fernández said during a Tuesday visit to Esperanza that the federal government has an obligation to help those being victimized by domestic violence.

There is not a woman in the world who does not understand the painful reality of domestic abuse, she said.

“Abuse of women is something that, if you are a woman, you have known,” Leger Fernández said. “You have either known it personally or you have someone very close to you who has known it. And that can be either domestic violence or rape or assault. I don’t know that there’s a woman out there who doesn’t know somebody who hasn’t been harmed in that way.”

Federal funding can help those women and their children access safe housing and support services, she said.

Estrellas acknowledged the money “will help immensely. Running a 24/7 shelter with adequate staffing for domestic violence needs is expensive.”

She told Leger Fernández that hiring six more needed employees to deal with the crisis will add $250,000 to the nonprofit’s budget.

“Having this money come through would be amazing,” she said of the federal funds.

Recent reports indicate instances of domestic violence increased considerably during the pandemic. Leger Fernández said the pandemic demonstrated how vulnerable these victims are.

Several current employees at the shelter are former victims. Some spoke of the role the shelter’s support services played in helping them escape a nightmare.

One said she learned from meeting other domestic abuse victims that “it’s nothing to be ashamed of.”

Even after leaving an abusive relationship, the woman said, she was “continually overwhelmed” by trying to find a job and a safe place to live, given the high cost of rent in Santa Fe.

Estrellas said the shelter, which provides 32 beds, would like to expand and offer more family-friendly spaces, among other services, for the community.

It can also use help to provide more services and in raising funds, she said, and is prioritizing finding safe havens for those seeking to flee domestic violence.

“You shouldn’t be doing that alone,” Leger Fernández told her. “The government should be helping you.”

Estrellas and other employees told the first-term congresswoman that more can be done to help fund house mortgages and payments for those victims.

Leger Fernáandez said that is a conversation she is having now with others in Washington, D.C.

The new federal funding will be administered through a number of state agencies, including the Children, Youth and Families Department.

About $738,000 will go toward supporting and providing emergency shelter, housing and services in New Mexico.

Nearly $300,000 will go to the New Mexico Coalition Against Domestic Violence, while more than $1.163 million will go to New Mexico’s tribal nations to help with domestic abuse support.

Leger Fernández said while federal funding “doesn’t do everything,” it can help victims “create the opportunity for these women to move on.”

As she left the shelter, she said, “The people who really make a difference are the people we just met today, who make this their life work to help.”

I hope those are annual figures in federal funds. If not, it won’t really help in the long run. These programs need continued support in big dollars annually. Domestic violence does not go away in 12 months. I hope this brings awareness and folks don’t stop giving personal gifts because they think all is good for our local shelters.