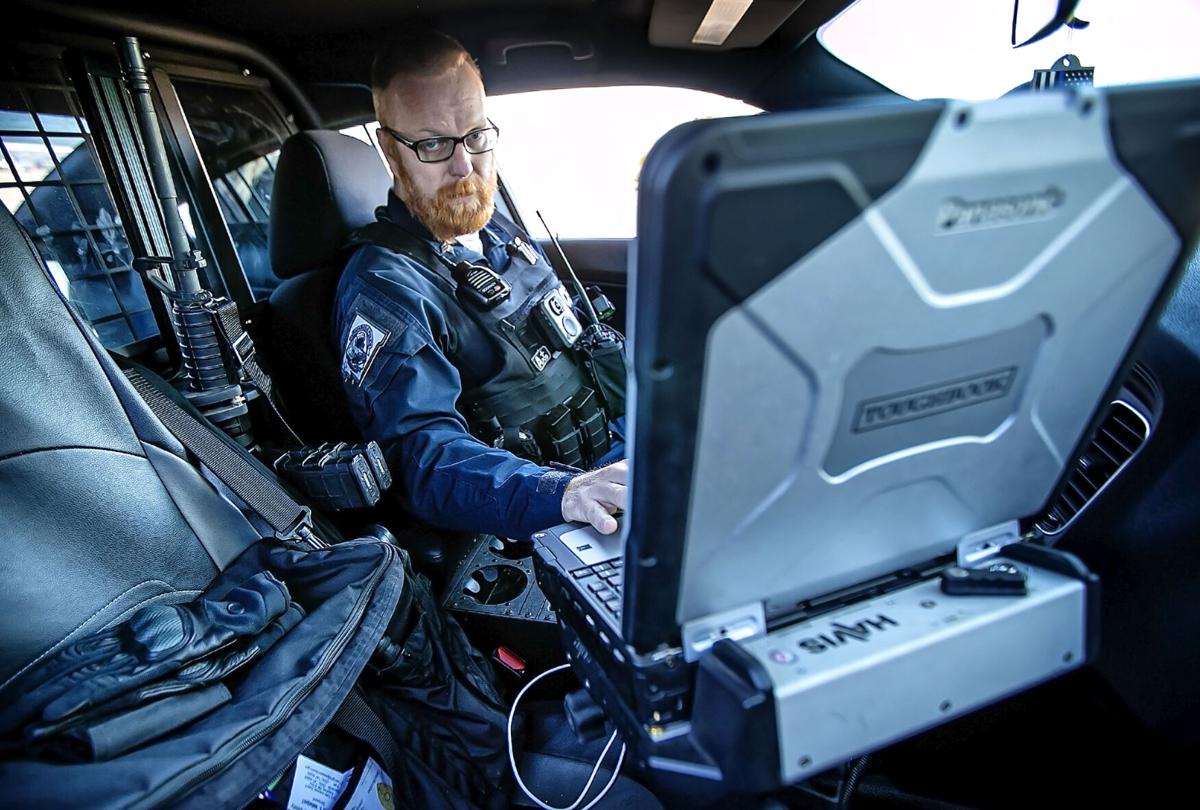 Española Police Department Sgt. Zack Wright gets a ping for a stolen car from California as he pulls up the data from cameras around the city on the computer in his cruiser Wednesday. Wright says the city's eight new license plate-reader cameras help increase efficiency by "taking out some of the legwork while on patrol." 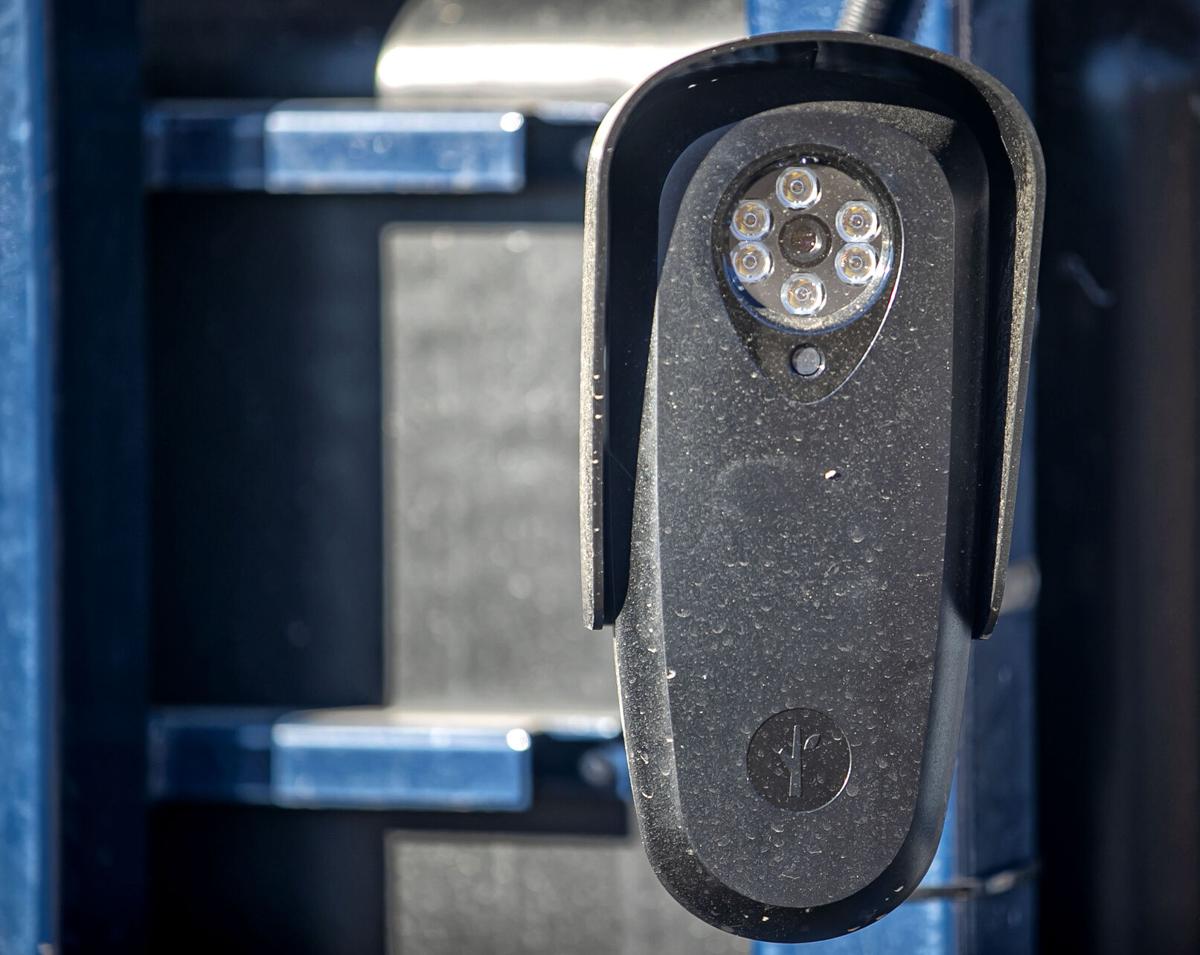 Española Police Department Sgt. Zack Wright gets a ping for a stolen car from California as he pulls up the data from cameras around the city on the computer in his cruiser Wednesday. Wright says the city's eight new license plate-reader cameras help increase efficiency by "taking out some of the legwork while on patrol."

A breakthrough crime-fighting device or an intrusion on personal privacy?

A pilot program for new license plate-reading technology may help Española police officers tackle violent crime and robberies while barely having to lift a finger. But the new tools also create concerns about how much scrutiny is too much.

The Española Police Department is in a trial stage of utilizing Automated License Plate Reading cameras, developed by Atlanta-based Flock Safety. The company describes itself as a “public safety operating system” and boasts clientele across the country, including 12 law enforcement agencies in New Mexico.

The goal of the program is to catch criminals and deter crime, said Española police Chief Roger Jimenez.

“The big thing is, we can detect any stolen vehicles or stolen license plates and hopefully deter violent crime in any of those suspects coming in or wanting to claim Española as a safe haven to commit those crimes,” he said.

Flock Safety installs fixed cameras, set atop 10-foot poles, to capture photos of license plates and vehicle details before uploading them to a database in the cloud, said company spokeswoman Holly Beilin.

Police then can utilize that database to receive alerts of stolen vehicles and vehicles connected to previous crimes, or to capture the license plate of a vehicle that may have been involved in a crime, she said.

The database pulls from the National Crime Information Center, an index of criminal justice information.

“Typically, a criminal isn’t going to use their own vehicle to commit other crimes,” Jimenez said. “They will usually steal a vehicle or steal a license plate and then commit those crimes.

“And for us to be able to deter that — or at least know that they’re in the area with these cameras — is huge for us,” he added.

Though the Española Police Department is only about three weeks into a 60-day pilot, officers already are seeing a “huge influx” of hits on stolen vehicles, Jimenez said.

Should his department decide to move forward with a full contract, it would cost $2,500 per camera per year, Beilin said, which includes installation, maintenance, software updates and cloud storage.

But such tools are not without critics.

The Rhode Island ACLU spelled out several concerns to local city governments that had planned to used Flock Safety technology. Their concerns included the program’s ability to search by car details such as bumper stickers, the potential for expansion of this technology and the lack of legislative limits on the use of the cameras.

“We’re not just talking about passive surveillance where cars are driving by and maybe there’s a flag in the system,” she said. “You can actually go in and put inputs in.”

Hoeppner said it is key to have public awareness when these programs are being established.

Local civil rights attorney Joe Kennedy added he is concerned about where the cameras may be placed, especially if those locations are not disclosed to the public.

“That would be my first concern … are you policing in a manner that’s going to impact minorities and people on the lower socioeconomic scale?” Kennedy said. “And then the collection of this sort of data and keeping it, and having it accessible, by individual police officers … creates all sorts of problems as to how you use this information.”

The company is not oblivious to safety concerns from private citizens who may not want such information easily accessible.

Once photos of license plates are uploaded, police can download those needed for specific cases. But they only have 30 days before extraneous pictures are automatically deleted, Beilin said.

Users are also required to enter a “search reason” when using the database proactively or reactively to a crime, she added.

“If it’s in the reactive case and they’re searching for this drive-by shooting, they’ll usually have a case number or they’ll put in the specific case,” she said. “That’s fully auditable.”

Local government officials also can request the audit trail of those searches.

Additionally, the company provides clients the ability to create a transparency portal that pulls data about the program for a specific client and creates a publicly available webpage for people to view. This free add-on is optional only to clients, Beilin noted.

“We have strong ethical guardrails around privacy … and have built features in to enable police transparency and accountability,” she said.

Hoeppner said while it’s a good thing Flock Safety has these safeguards, it’s important to have legislative oversight locking such measures in place.

“With any surveillance technology there’s just so much potential for abuse,” she said.

Forty states and more than 1,000 police departments are currently using the Flock Safety technology as a way to reduce crime rates in communities. Beilin said she could not disclose the other departments Flock Safety works with in New Mexico.

Beilin said the effectiveness of the system varies between agencies, but claims some of the company’s clients have reported a reduction in crime rates. One unnamed client in California reported a 70 percent reduction in residential burglaries, she added.

Jimenez, the Española police chief, said he hopes the department will receive a grant to pay for the equipment and go forward with Flock Safety to install more cameras — and catch more criminals.

Good idea but kind of running before we learn to crawl as so many cars in the area have NO license plates whatsoever.

I don't see why this is controversial at all. License plates are very public and our rate of vehicular offenses is very high. Also, number of stolen license plates on stolen cars is high.

Seems to me that if vehicles were meant to have their identity a secret, there wouldn't be such a thing as license plates in the first place. Driving is a privilege, not a right. There's no reason to pretend that this technology is in any way an invasion of privacy when you're driving around in a marked and registered vehicle on public streets.

Honestly, if it helps the police catch criminals and keep them off the streets, I am perfectly fine with somebody (or an automated system) running my license plate....I've got nothing to hide!

Emily I agree with you but we need to put as much effort into prosecuting and keeping the criminals in jail otherwise catching them is a waste of time and money.

I was pulled over last night at about 9:00 PM. I am a 76 year old white female, so no racial profiling. I could not imagine why. I was so surprised, I don't even know whose jurisdiction it was. I did see it was a police car and his lights were flashing. The cop asked for my license. I told him it was in my pocket and I would have to get out of the pickup to get it out. He then asked me, who is James Cox? I told him that he was my deceased husband. "Oh", he said. He continued that he ran my plates. WHY??? I did not ask. I was respectful. I did not get mad until after I got home. Yes, I do think this was an invasion of my privacy. I had done nothing wrong. Was this a brand new cop?

Bonnie, it’s the price we have to pay to reduce crime, no one lost an eye.