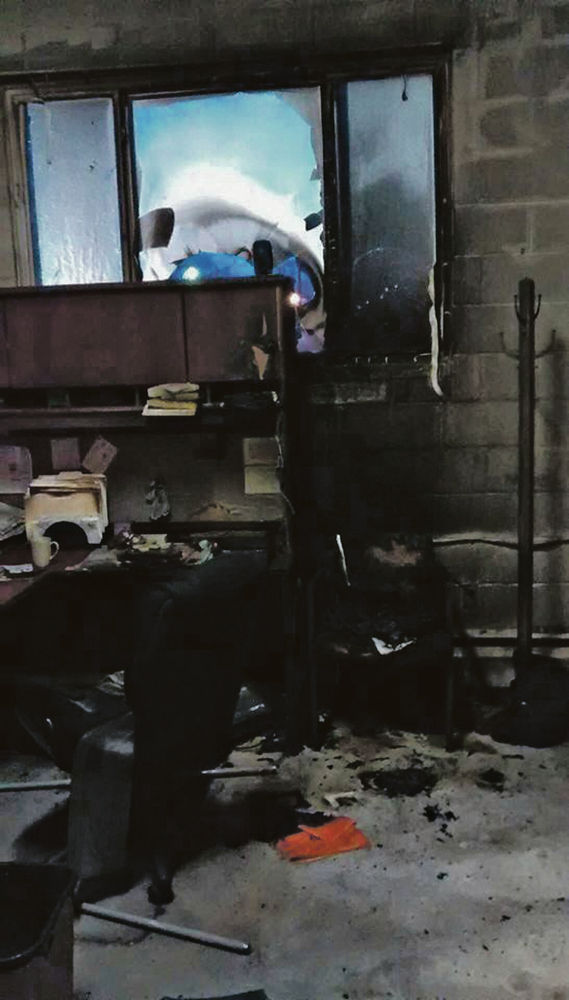 Española police say an arsonist started a fire at the office of the Rio Grande Sun, 123 North Railroad Ave., early Saturday after breaking a window and pouring gasoline inside. Courtesy photo 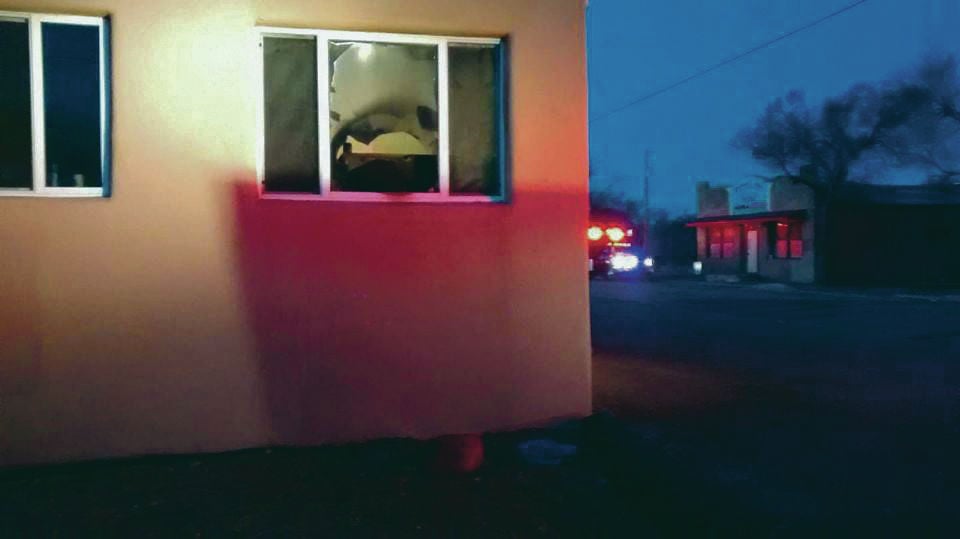 Española police say an arsonist started a fire at the office of the Rio Grande Sun, 123 North Railroad Ave., early Saturday after breaking a window and pouring gasoline inside. Firefighters were able to contain the fire to the office. Courtesy photo

Española police say an arsonist started a fire at the office of the Rio Grande Sun, 123 North Railroad Ave., early Saturday after breaking a window and pouring gasoline inside. Courtesy photo

Española police say an arsonist started a fire at the office of the Rio Grande Sun, 123 North Railroad Ave., early Saturday after breaking a window and pouring gasoline inside. Firefighters were able to contain the fire to the office. Courtesy photo

Española police said an arsonist tried to burn down the Rio Grande Sun weekly newspaper office early Saturday after breaking a window, pouring gas inside and lighting the room on fire.

No one was inside the brick building at the time, and no injuries were reported when fire officials responded to the call at about 5:30 a.m. Saturday, said Detective Cpl. Daniel Espinoza, a spokesman for Española police.

Fire officials were able to contain the fire to the office before it spread through the building, located at 123 North Railroad Ave., Espinoza said. Damage estimates weren’t available.

Investigators are trying to determine the motive and haven’t identified any suspects. Espinoza said he couldn’t confirm or deny if the arson was in retaliation for the weekly’s news content or editorials.

Espinoza said police have reviewed one surveillance video that shows a man walking around the building, but shows nothing incriminating. He added that there are other survelliance videos from different angles, but they weren’t immediately available for investigators.

Espinoza said they haven’t interviewed the 911 caller yet and plan on canvassing residents on the west side of Española, where the newsroom building is located.

Robert Trapp, the publisher and owner of the weekly, said he has “no idea” who might have tried to burn down the building or why. Trapp said he hasn’t ordered his reporters to take any safety measures, and the staff will go into work Monday “just like any other day.”

The Rio Grande Sun, which was the focus of a 2012 documentary titled The Sun Never Sets and has a paid circulation of about 11,000, was founded in 1956, according to the newspaper’s website.

“The newspaper has always held a strong editorial stance against political corruption at the city, county and school level while striving to inform the electorate,” the weekly’s website says.

The NNMC Group is a very informative site for reliable and document-supported analysis regarding trends and practices at the college currently. I do recommend it. It's at: http://www.nnmcstudygroup.org/blog The site has both a blog and the "media" tab does a good job of aggregating press accounts of issues at NNMC, as well as reports by the AAUP and Inside Higher Ed (it also saves you Googling time!). The twitter feed for The NNMC Study Group can be found at: @NNMCStudyGroup

The smiley faces go away and the gloves come off when Ms. Rodriguez takes on her alternative personality at NNMCstudygroup, where she tweeted hatred all evening.

I want to publicly go on the record that I believe and fear that this small group of angry and viscous people are capable of violence.

Historically and across the nation, acts of violence are common among former employees and students. If you review facebook posts and tweets associated with NNMCstudygroup and its hatred followers you too will see the writing on the wall.

Posts and tweets include pictures of administrators, their vehicles, and comments that insight violence.

Although I have a bachelor's degree in history from a prestigious public university (i.e. not Northern) I must confess ignorance regarding the supposed commonality of former students being perpetrators of violence. Perhaps as a former student (and student regent) himself, Mr. Serna is speaking from personal experience? [beam]

At any rate, a high-level administrator such as Mr. Serna should be capable of using the English language in a professional and accurate capacity, including knowing the difference between "insight" and "incite." Let's help him out by using the two words in sentences.

By repeatedly raising tuition, cutting academic programs, cracking down on free speech, and axing dozens of faculty, the NNMC administration has done much to INCITE a spirited backlash from concerned community members. Indeed, the fact that over 500 people signed a petition calling upon the NM Higher Education Department to reject the NNMC administration's most recent budget should alert Mr. Serna to the INSIGHT that the opposition he misrepresents so condescendingly is in reality coming from a large, diverse and informed group of citizens.

Weird. I read there was an arson at the Deming Headlight offices as well about two weeks ago.

Interesting that Jeff who has made threats before finds himself making the first comment. I have forwarded this posting to the Espanola Police Department because it seems that the first to scream fire might be the culprit.
The second interesting fact is that Annette Rodriguez who claims that she is a native American but does not know from what Pueblo, is invoking prayers. Such a hypocrite when she has been using Jeff to do her dirty work. This is a group of people that were fired for incompetence from Northern. Now they want to be seen as Saints despite spewing hatred and slanderous comments in their blog.. Your neighbors at Placitas should know who you really are in addition to your domestic partner. Patricia Perea who is working at UNM. President Frank beware.

Hi Mr. Vigil, we've never met and I haven't met Mr. Green either. I'd be happy to sit and chat with you about experience at NNMC, my ancestry, my homelife, etc. Please feel free to contact me! [smile]

I have not made any threats EVER before and I challenge Mr. Vigil to provide a scrap of evidence to the contrary. The fact is I served with honor as former NNMC Student Senate president and graduated from the college in 2013 with a nearly perfect GPA. It's curious that these slanderous allegations are being made against me now, when the only criticism I ever heard from administrators during my time at Northern was that I protested the lack of student representation on the NNMC Board of Regents by putting red tape over my mouth at the Board meeting in January 2012 -- a peaceful action that was covered on the front page of the Rio Grande Sun and led Mr. Serna to go on an angry tirade against me at our next Student Senate meeting. That happened to be the first time I became aware of his hatred against the Rio Grande Sun asking critical questions of the NNMC administration.

I trust that the Espanola Police Department has not contacted me for an interview because I'm not a suspect in this case. As an award-winning journalist myself, I totally condemn this cowardly and craven act of arson. The Rio Grande Sun does precisely the kind of hard-hitting journalism that I admire. I hope they keep it up and aren't intimidated by this violence, whoever did it.

It's a blessing that no one was hurt. The reporters and editors at the Sun often work late into the night and on weekends to make deadline. Looking forward to what the surveillance footage reveals. Prayers to those affected by the arson.

Strong words from the same man who made threatening remarks to me outside the Capitol a few days ago while riding away on his tricycle. You're also the same person who engages in social media conversation with individuals who make comments like, "we will catch them where they live," "someone should put Northern administration out of their misery," and "these administrators are DOA."

If you don't know the difference between a tricycle and a bicycle, you probably also don't know the difference between "threatening remarks" and an innocuous salutation. Or maybe you're just paranoid? What I actually said outside the Capitol while riding away on my bicycle was, "Keep it up." That was right after the NNMC administration's pet name change bill (SB 603) sponsored by Senator Cisneros passed the Senate Public Affairs Committee. I do not condone violence and I challenge you come up with proof of any actual "threatening" remarks made by me, either on social media or in person. Of course, you can't because it never happened and they don't exist. Which means that your comment is basically slander.

To be sure, the Sun has made lots of enemies over the years through their hard-hitting journalism. But if I were a police investigator, one of the places where I'd look for the culprit is Northern New Mexico College. It's well known that the Northern administration hates the Sun with a passion. This would be just one more crime for them on top of a long list, some of which the Sun has reported on.